Enjoy unlimited access to all of our incredible journalism, in print and digital.
Subscribe Now
Advertisement
Real Estate

The Dallas Real Estate Market Has Cooled Off. Don’t Panic.

Subscribe
Advertisement
Mike and Tracy Voegtle are not getting back into the Dallas housing market anytime soon. Who can blame them? It took months of constant searching for the couple to find their Far North Dallas home back in 2013. That year, the local residential property market was the hottest it had ever been. Cash offers were being made for homes all over the area. Prices soared higher by the day. Supply was limited. Demand seemed endless. That meant the Voegtles had to drag their three boys to multiple open houses on the weekends and face disappointment as they lost out on the first six houses they bid on. Finally, they landed a four-bedroom, four-bath place near Brentfield Elementary. As the Dallas housing market has stayed hot in the years since, the Voegtles’ house has appreciated significantly, even though the only major change they have made was putting in a pool. But something else has changed in the Voegtles’ neighborhood. “For Sale” signs are standing on lawns a lot longer than they used to. “The housing market around us feels like it is slowing down a bit,” says Mike, an architect with Dallas’ 5G Studio. “We’re seeing houses sitting on the market for a long time now, for months, even. That didn’t happen a few years ago.” In fact, the average days on the market for a house in North Texas is now 53—the highest it has been since the Voegtles bought theirs. That’s just one of the many signs that the once white-hot Dallas housing market has finally begun to cool down. 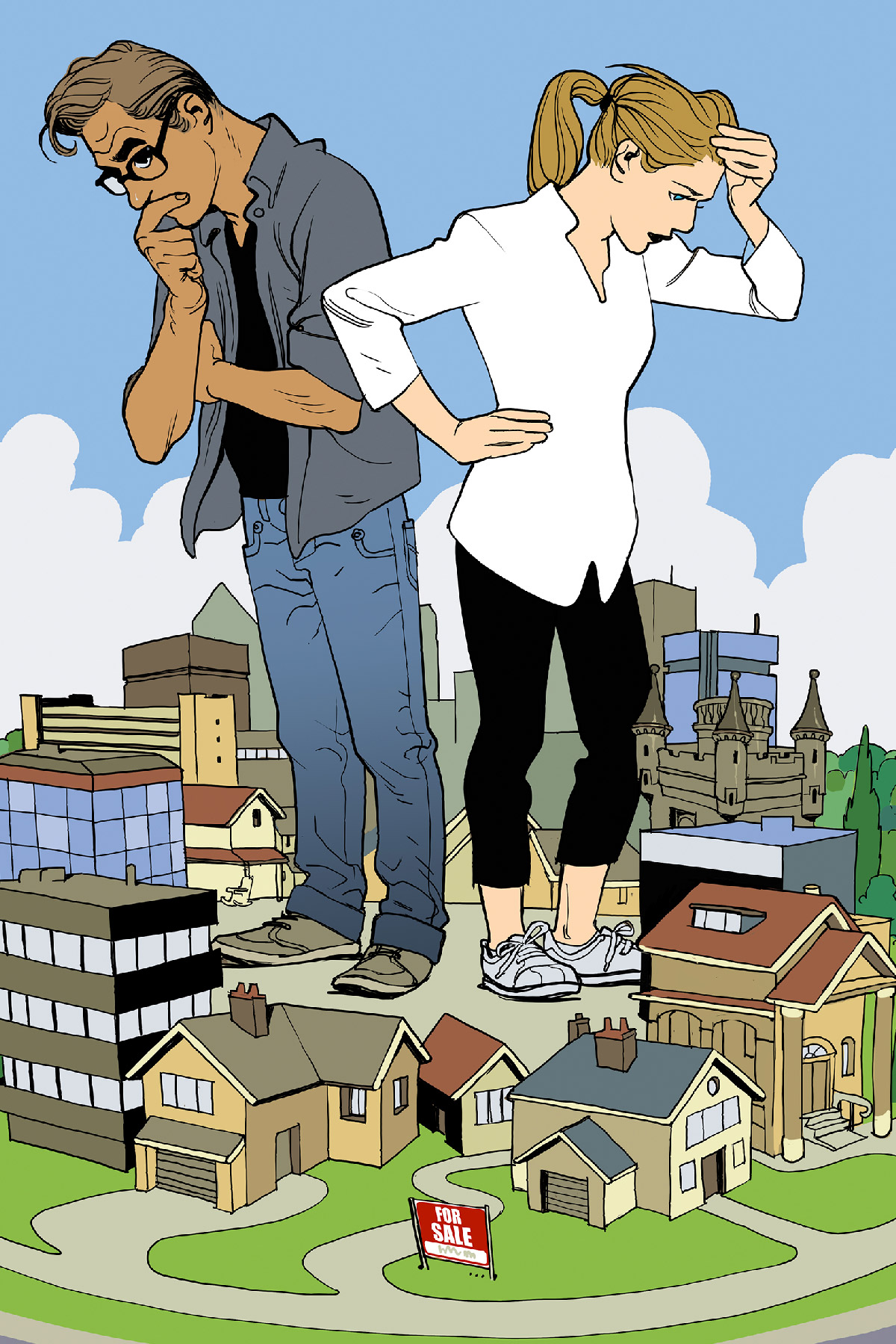 Strength in the Numbers

Don’t panic. This is not a bust. It is not a crash. If you are a homeowner in the Dallas area, you will not have to start making your belt out of cardboard. Prices overall are still increasing. First-quarter home prices in North Texas increased 1.4 percent over their level in 2018, according to the National Association of Realtors. That was the smallest price gain in the area since 2011. In 2011, the median home price in North Texas was $150,000. Today, it is $254,300. So if area price increases have slowed, does that mean that $254,300 is something like the top of what has been a huge upward sales market here? Not according to Zillow. It’s dubbed the Dallas market “cool,” but it’s also calling for a 7.5 percent rise in the median home price this year. That’s only half the 14.2 percent rise last year. But it still means the market is on an upward trajectory. The reason for that is simple. There are jobs here, and tens of thousands of people are still moving to this area looking to land those jobs. The Bureau of Labor Statistics says 102,500 new jobs were created here in 2018. That helped cut the local unemployment rate to 3.3 percent as this story was going to print—lower than the 3.9 percent national average. There are 3.7 million people in this area going to work every day now. Some of those people are new. About 130,000 people moved into the Dallas and Fort Worth area just last year alone. Some experts figure that about a third of those people want to buy a house. That’s a lot of new demand on top of whatever demand already existed before those 40,000 people dropped into this market. The bottom line? “Home prices this year will still probably go up in Dallas-Fort Worth,” says Jim Gaines, chief economist at the Real Estate Center at Texas A&M University. “But they’re not going up as fast. In economics terms, we call what is happening a ‘reversion to norm.’ The market is going back to its normal pace of activity. Instead of being in a state of exuberance where prices go up 10 percent annually, they’ll return to going up 3 or 4 percent.” For homeowners, it seems like good news that the demand is still out there and prices are still climbing. But, then, what’s the deal with those lingering “For Sale” signs in Mike Voegtle’s neighborhood?

As every Econ 101 student knows (or ought to know), when demand is high and supply is low—both phrases describe the overall North Texas housing market—prices go up. And, sure enough, whether you ask Zillow or the National Association of Realtors or just about anyone else, prices here are continuing to rise.

Don’t panic. This is not a bust. It is not a crash.

Sales, however, are not really going up. In January there were about 15,254 homes listed for sale in a part of the Dallas area that includes Plano and many other northern communities and Irving and other western cities. In April there were about 18,012 homes listed. That, in real estate agent-speak, is about three months of inventory, meaning that, if no new houses were listed for sale for the next three months, the existing level of demand would consume all the current listings and there’d be no more homes left to buy here. There are, of course, new listings coming online all the time—both for new homes and existing homes. Dallas leads the nation in number of new homes under construction. In 2018, construction began on 34,523 new homes here, up almost 3 percent from the year before. Houston ranked second to Dallas with 30,206. No other city reached 30,000 “home starts,” as they’re called. Even so, Dallas still has only about three months of inventory on hand, well down from levels seen earlier this decade. Said in fewer words: supply is tight. Demand is high. So why are sales flat and why are price increases slowing? Many experts offer the same explanation: the prices are too damn high. “There has been some price fatigue,” Gaines says. “People are looking at what they’re being asked to pay and there’s a little more resistance from buyers. If they’re not getting exactly what they want, they’re not buying it at all.” Little wonder, then, that 61 percent of Dallas-area residents (an increasing number of whom are young people in the early phases of their careers) are now renters and not owners. Jeff Duffey, who runs Jeff Duffey & Associates, a real estate firm that handles both existing and new home sales in Dallas, thinks that too many sellers believe Dallas is experiencing a boom market that gives them total control over pricing. “For example,” he says, “two to three years ago, it was hard to find many homes in North Dallas that were listed between $400,000 and $600,000. Now I can show someone homes for five straight weekends and still not go through all of the active listings in that price range. Sellers who have overpriced their homes or who think they don’t need to go through the trouble to fix up their homes for sale are watching their properties sit on the market. Buyers don’t want those homes and they don’t need them.” But some potential buyers may also simply not be able to afford what’s on the market in many neighborhoods. Since 2012, prices in the Dallas market are up more than 60 percent. Fitch Ratings, a credit analysis firm, says the Dallas market is one of the more overvalued in the country and that prices are 15 percent higher than what they should be based on the growth of the area’s population, income, and average rental prices. The median income in North Texas has gone up a lot in the last 10 years, jumping from $58,025 to $67,382. That’s 16 percent. Median home prices in the same time period are up 70 percent. “There are a whole bunch of houses now that are priced in higher price points—price points that a lot of people can’t afford,” says Paige Shipp, regional director in Dallas-Fort Worth for Metrostudy, a real estate research firm. The National Association of Home Builders has crunched numbers that tell the same story on affordability here. The NAHB puts together a quarterly Housing Opportunity Index—a ranking of the percentage of total homes for sale that are considered affordable to the typical family. In Dallas a decade ago, the NAHB’s Index found that 75.7 percent of the homes were affordable. That rating increased a year later, peaking at 79.9 percent in the first quarter of 2010. But it has fallen sharply in recent years, sinking to just 45.2 percent in the second quarter of 2018, then rebounding slightly to 52.4 percent in the first quarter of this year. Affordability isn’t just a problem in Dallas. It’s a major issue in many big markets today, like San Francisco. Still, the national affordability index average is 61 percent—higher than overall affordability in Dallas. Builders have started to address buyer concerns about affordability by hanging drywall on thousands of new homes priced between $250,000 and $350,000. Metrostudy says one-quarter of all new home construction in the area is in that price range. A handful of those homes are townhouses located in Dallas. But most are more traditional single-family houses in communities far from the center city, with price points in the $250,000 to $350,000 range. Examples include Sandbrock Ranch in Aubrey and Union Park in Little Elm—new developments popping up around U.S. 380 in Denton County. “Highway 380 is hot as a firecracker,” says Bill Shaddock, a partner in Shaddock Development Co. and CEO/owner of Capital Title of Texas. For those who aren’t interested in seeing the pop of that affordable, exurban firecracker—and all the issues of sprawl that go with it—the Dallas area still has plenty to offer buyers and sellers, even as the market reverts to some of its former norms. “This is the first time in my career I’ve been able to say to my sellers that if they do certain things to their homes and are careful with how they price it, they will absolutely sell the home in a week,” Duffey says. “That’s not a guarantee real estate agents are normally willing to make, but I know that the buyers are still out there, and they’re ready to make a deal.”

Here are the hottest and nottest places in North Texas, based on change in median prices.