In the first weeks after Homewood’s opening, you could, as a walk-up, wait an hour and 15 minutes and be seated at 9:45 pm. It’s no surprise when you know the luminous trajectory of Matt McCallister and his former restaurant, FT33. Chefs in his kitchen—like Misti Norris, Josh Sutcliff, and Joel Orsini—learned to butcher whole animals, cure charcuterie, and forage. Their talents were flung out into the universe, bohemian geniuses and bringers of a new farm-to-table movement sprinkled about the city. And then their Johnny Appleseed was gone. 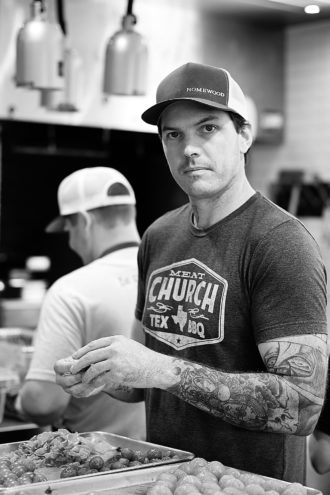 Now, after nearly a yearlong hiatus, McCallister is back, and you can feel his gravitational pull on the Dallas dining scene. He’s drawn in talent that’s converged to work again at a place where bartenders shake cocktails with fennel or tarragon essence, and homemade misos and vinegars line shelves. It’s similar to FT33 but different. FT33 was his rebellious act, his punk-rock debut. Homewood is like the midcareer album from an artist who’s mellowed, sobered, remade his life, and reached for something more approachable.

Servers wear chambray, and large windows let early-evening light into a dining room with a bar that faces a wood-burning grill and a counter where stationed cooks arrange charcuterie. Assigned persons are in charge of the garden, fermentation and preservation, proteins, vegetable components. In other words, it is like FT33, only with pretty gold finishes instead of graffiti art and rap blaring in the bathrooms.

Homewood’s inspiration is the seasons, a pantry in which everything is in flux. I saw menus change over the course of six visits in six weeks, and I appreciated the smart things done with unripe blueberries or vine-pickled Sungold tomatoes.

Start with a French pét-nat rosé or Garnacha from a wine list awash in natural, biodynamic, and organic bottles from boutique producers. The Petit Mort cocktail is a lovely showcase of Suze, its bitter herbalness tamed. Golden beet gives another incredible color. The Petit Pois, with pea and genepy, is like an Aviation put together by English garden elves.
Or ease in with Parker House rolls you can slather with an aerated, mousse-y Parmesan Mornay laced with chicken drippings. This, of course, passes for bread service. 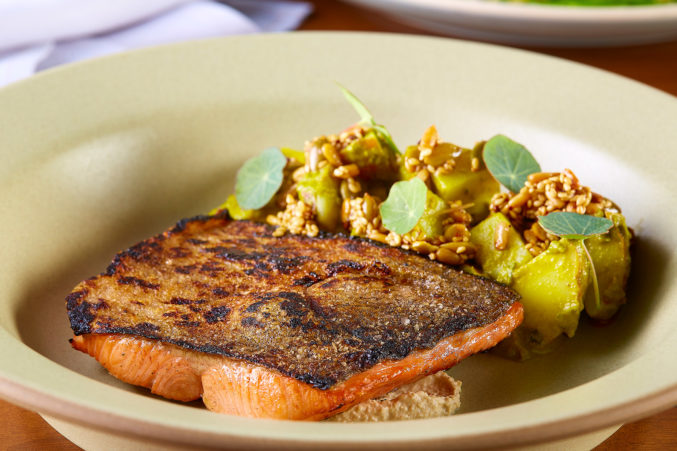 The rolls may usher in a very dainty, very pretty dish of farro and strawberries: a confetti of vibrant, lipstick-red berries and others that are pickled green; the toasty farro with a complement of sea foam dots of chive aioli and coriander blossoms. You forget that somewhere in there is shrimp.

Butter-braised snow peas on a pillow of beurre monté with chile oil and rye bread crumbs vie for your attention against a dish of summer tomatoes and peaches. On the bowl’s rim is a smear of rusty-red sun-dried tomato paste, made from last year’s tomatoes, with tomato leaf-infused vinegar and dehydrated tomato skin speckling the surface of aerated olive oil the color of pale saffron. Later, the peaches will be replaced by plums, each stone fruit bringing out a side of the tomatoes that is almost euphorically aromatic.

If it seems there’s a focus on produce, that’s true. But then there are pastas. At FT33, the team worked with a walk-in the size of a phone booth. Now they have a pasta station (and a pastry kitchen). One night, emmer gemelli with razor clams was beguiling in a buttery sauce with bits of chorizo and the surprise of finding the clams like shaved garlic. Stinging nettle and smoked leek farfalle tangled with wilted turnip greens—a fabulous shade—and met the rich savoriness of superb meatballs of sirloin, pork, and some kind of unearthly magic.

And, yes, there are McCallister’s ricotta gnocchi, which have always seemed to me like delicately formed cheese clouds—one night with tangy ramp leaf pesto and black garlic bread crumbs, and another night, (somehow, incredibly) more wonderful, with a buttermilk corn sauce. Tagliatelle with smoked trout reminded me of lox and bagels. But then there’s the delicious Bolognese and the musky gravy of lamb ragu with fusilli. 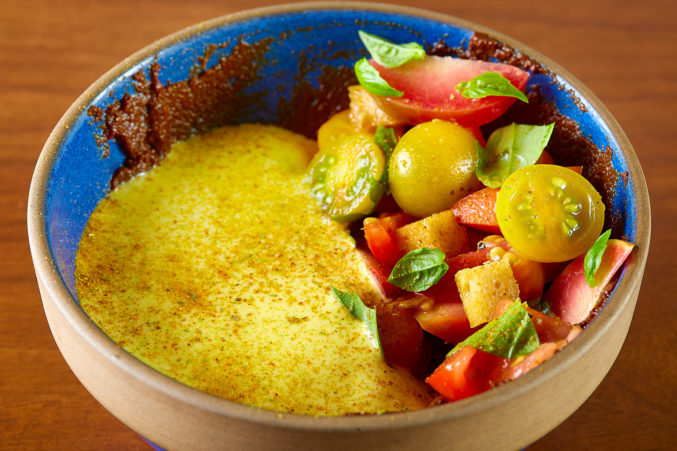 There’s a new vein of comfort and a simplicity of presentation. With mains, as elsewhere, the emphasis is on garden and field. I’ve rarely had better pork than the loin cooked a juicy medium, with wisps of greens and yellow spigarello blossoms that tasted of sun and pollen, earthy hominy cooked in ash gathered from the hearth, and toasted-peanut pork jus. It went away. But it was followed by many dishes in the same template.

Grass-fed sirloin from 2S Ranch was served with cabbage charred over the coals, its edges like singed parchment. A rib-eye bore the richness of tallow; compound butter; a whipped mushroom purée; and a bordelaise based not on a case of veal bones, but a gnarly femur and others, and then treated absolutely classically. Was the price tag—$90—another reason eyes blinked wide momentarily? Yes. But only before the assessment of worth sank in. And beautifully cooked steelhead trout with a side of new potatoes wore a robe of nasturtium chile sauce. The heat comes as a back note, and pebbled on top is what they’re calling a toasted seed salsa, a brittle that reminded me of toasted sesame oil and roasted pepitas. If there’s a thread that runs throughout, it’s ingredients taking center stage, transformed by fire or fermentation.

The greens, seeds, and herbs salad is almost naked, its dressing like a gauze. The message is bold: do not overadorn in a city that often does. Plates are not high concept, though the preparations are dizzying. They feel, instead, of the land and farm. 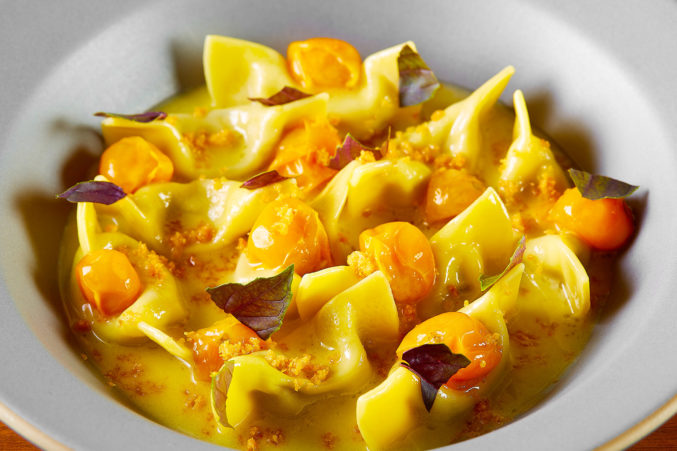 I never had any dishes at Homewood I didn’t like, although on my first visits, I was thrown off by jarring acidity that crashed against the rustic comfort. I wanted polenta added under a dish of pickled mushrooms. Baby squid were attacked by a sharp vinegar bite. But that pattern receded.

Desserts by Maggie Huff, a pleasure we’ve been denied for a year, are simple. She keeps them as close to their origins as possible, coaxes them just enough to create expressive taste impressions. A Texas peach crostata partners with chamomile ice cream, pure farmhouse French with a sneaky frangipane layer, the rosy slices the essence of peach. For a rhubarb galette, tangy and tart, she’s done almost-raw slivers over a rustic, free-form dough, with crème fraîche ice cream and caramel jam from the whey produced in ricotta-making. The theme of the hearth fire carries through in a frozen beet and smoked strawberry dessert, and a banana and chocolate semifreddo, too, is surprising and impeccable, by one of the city’s more talented pastry chefs.

It’s rare to see striking creativity expressed on such a coordinated and consistent scale—the deftly manipulated ingredients and techniques, the grasp of flavor. We have Misti Norris, Joel Orsini, Donny Sirisavath, and Peja Krstic. And we have this.

I reflected on the season of my visits, the evenings in which I’d fostered friendship, patched an old wound, fêted an esteemed colleague. I caught myself thinking this, too, was a Homewood ascendancy. During a meal, you feel the parts working together—the ingredients, the vision. This is how we know we are alive.