In the beginning, Sharon Brucato and her husband, Paul, never imagined raising llamas would become a serious undertaking. “It started off as a joke,” Sharon says. Her son, now 22-year-old Tommy Brucato, fell in love with llamas during a family vacation in Germany. The family had gotten lost and ended up at a zoo that had a pen full of the creatures. “I just kind of became fascinated with them,” Tommy says.

When the family returned home to Yorba Linda, California, they decided to take a “llama hike” in San Diego for Tommy’s birthday. They discovered there was a llama rescue center nearby for animals that had been neglected or abandoned, and Tommy decided to volunteer. “My parents didn’t seem to see any problem with it,” he says. “It was just one of my hobbies.”

Eventually, the entire family started making trips to the rescue center, taking the llamas on walks around a park. Parkgoers would ask if they could walk the llamas, too, even offering to pay to walk them. “We were like, ‘OK, we’re already doing this. Why don’t we make some money and get some help?’ ” Sharon recalls.

The Brucatos bought their first two llamas and launched ShangriLlama, named after the mystical Himalayan utopia depicted in the 1933 novel Lost Horizon. But they soon outgrew their California home. In 2014, just after Toyota announced its move to Plano, the Brucatos decided to move to Texas as well. The state’s business-friendly atmosphere—no state income tax, more open spaces, less expensive living costs—made it an easy decision, Paul says. (ShangriLlama has since moved to Royse City, a property that includes a replica Irish castle. They own an abutting residential location for the Llama walks, lessons, commercial photography, and llama birthday parties.)

But moving to Texas did require some sacrifices. Como T. Llama had to give up his starring role as Buddy Callahan, a renegade detective on the Starz Digital series Llama Cop. (The show is worth watching on YouTube if only to catch the episode where Callahan goes undercover in a fake beard to catch some drug dealers.) And the local news station that had routinely covered the goings-on at Shangri­Llama was disappointed. “They were like, ‘Oh, no! First Toyota, now the llamas,’ ” Paul says. “And the front page of the local newspaper proclaimed in a headline: ‘Llamas moving to Texas.’ ”

Due to arthritis, Drama Llama avoids walks. In addition to leading Llama Llessons, Sharon Brucato once ghost-wrote for health and technology companies and published a book, China’s Cancer Solution, about the healing power of reishi mushrooms. Her most notable book is The Llamas of ShangriLlama. 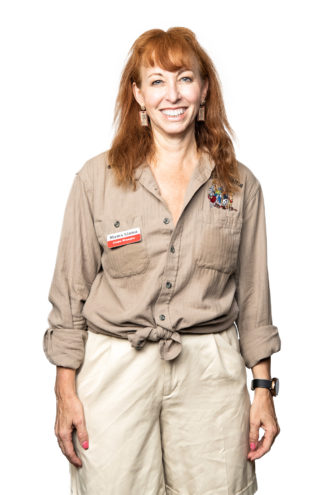 Sharon steps out into the backyard of her Plano-​area home and heads toward the barn, which is about to be equipped with a heating and air conditioning system. Behind the barn sits a new red trailer used to transport the llamas to school events, to the park for walks, or to the veterinarian.

There aren’t any other llama ranchers nearby to talk to about animal husbandry, so Sharon spends considerable time each day browsing the internet and Facebook for fellow llama breeders and ranchers to gather tips on raising, feeding, and caring for them. The Brucatos have learned that llamas must have specific diets and can get sick easily on more than 125 common plants.

A relatively young and healthy male llama (many live into their late teens) commands an average of $1,500 to $2,500 when purchased through a breeder (females usually cost $3,000 to $5,000). All six of the Brucatos’ llamas are purebred and qualified to compete in llama shows held at county fairs and other special events. But the Brucatos don’t allow their llamas to compete on the show circuit. Shangri­Llama makes its money offering the public what it calls Llama Llessons, as well as the opportunity to walk the Brucatos’ llamas through a nearby park, tethered to a leash, for $50 a person.

ShangriLlama also sells llama books and llama pajamas (which are especially popular in Australia, according to Sharon)—made by the Brucatos and sold at the ranch and online. The Brucatos teamed up with an Incan tribe in Peru to make llama dolls that look like the pack at the ranch, which are available for sale with the professionally illustrated The Llamas of ShangriLlama children’s book that teaches 30 facts about llamas.

A new GameStop commercial features Dalai Llama with the help of voice actor Patrick Warburton, best known for his role as Puddy on Seinfeld. And Bahama Llama, a former three-time grand national champion, visits The Statler Hotel in Dallas for fancy events, using the elevator to reach the second-floor ballroom.

Llamas can kick, but they only kick predators. They can run as fast or faster than a horse, at up to 35 miles per hour.

But the llamas seem oblivious to their celebrity as Sharon steps into the barn. Dalai Llama has his own stall since he is the “king of the llamas.” His eyes are a silvery blue, a rare trait, his coat a bright white. In the other stall, Bahama Llama, Barack O’Llama, Drama Llama, Pajama Llama, and Como T. Llama munch on hay scattered across the floor.

When the barn is packed full of visitors, Sharon hooks up to a microphone and greets everyone. She gets into myths first.

“How many people have heard that llamas spit?” she asks the crowd. A mass of hands shoots up in the crowd of about 20 people.

Sharon explains that llamas spit at each other in their challenges for rank in the pack and to show dominance, but that llamas who are raised right and aren’t abused don’t spit at people.

Sharon dispels other common myths. Llamas can kick, but they only kick predators. They can’t bite because, like cows, they have no upper front teeth. They can run as fast or faster than a horse, at up to 35 miles per hour. They don’t produce enough wool to be profitable.

She picks up a plastic banana and holds it up to her head, explaining how llamas use their banana-shaped ears to communicate, wiggling them back and forth. The yellow fruit catches Pajama’s attention. As a recent arrival, he hasn’t gotten completely used to this part of the lesson. He still thinks the banana is a treat for him, and he stretches out his neck.

Sharon tries to pull the banana away, but when Pajama Llama doesn’t stop, she lets out a heavy sigh and holds out the plastic fruit for him to inspect. He opens his mouth and closes it over the banana. Since he doesn’t have any upper front teeth, the prop slips out of his mouth. He sniffs at it, then heads off to eat more hay.

Though most visitors to ShangriLlama come to observe, walk, and experience up close what they discover are highly sociable animals, Sharon sometimes has more unusual requests. Organizers of bridal parties and weddings will ask to have family photos taken with the llamas. One man told Sharon he wanted to tie an engagement ring to a llama harness and propose to his girlfriend on a llama walk. “I was nervous about it,” says Sharon. “I mean, that’s expensive. But we let him do it.” 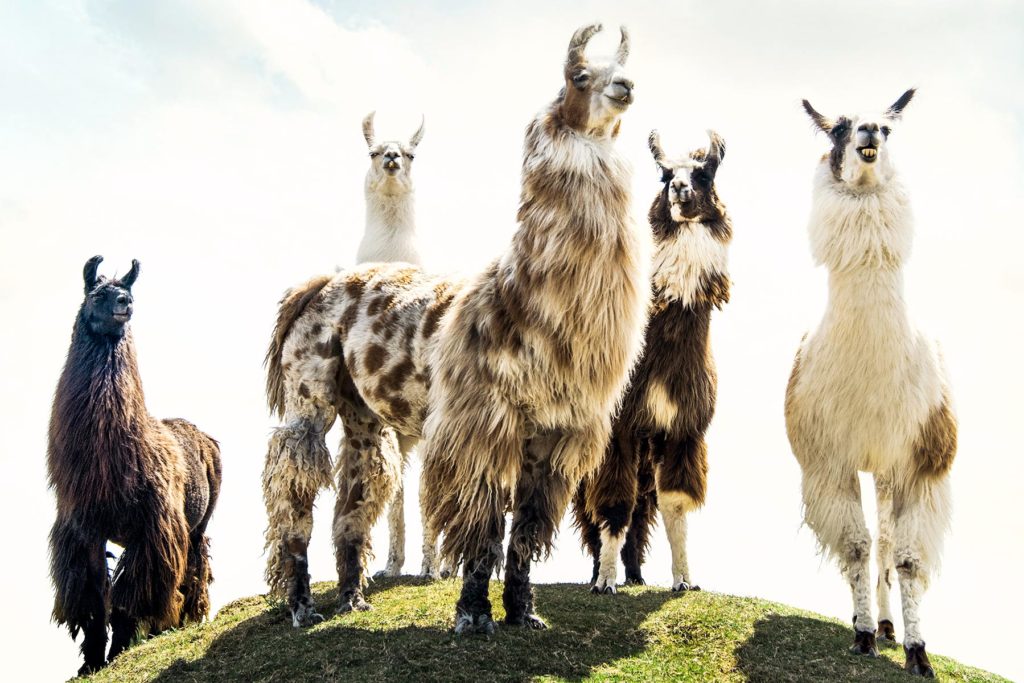 King of the hill:
Como T. Llama (center) has his own IMDB page. He starred as Detective Buddy Callahan on the Starz Digital series Llama Cop.
Sean Berry

As Sharon closes out the Llama Llesson, the first of the walkers shows up. All of the llamas except Drama Llama, who has arthritis in his right foot, will be going out. It’s a short ride to the park in the trailer. When the llamas arrive, parkgoers stop whatever they’re doing and move closer to the trailer to watch them unload. Live-action role-players, dressed as knights and wizards, drop their foam swords. A local church group stops its game of capture the flag. Llama walkers scurry over to the trailer to try to improve their chances of getting to walk their favorite llama.

Sharon says nothing beats the joy she gets from witnessing the excitement of guests and strangers. “It’s the faces, the delight of people who are unsuspecting. That’s just so rewarding,” she says. “We’re not trying to stand out or be different. They just make us happy.”

The address for ShangriLlama is kept secret until a visit is booked, for the safety of the llamas and privacy of the family. For information or to schedule a trip, go to shangrillama.com. Llama Llessons are $20 a person, and llama walks are $50 a ticket. Write to [email protected].

Scenes from the Dog Costume Contest at Mutts Canine Cantina