By now you’ve no doubt heard of Texas Live!, the enthusiastically punctuated entertainment and eatery complex that just opened and will hopefully make everyone forget how bad the Rangers are when, in 2020, they start playing in the stadium that is being built with child labor and financed with the sale of prosthetics stolen from wounded Iraq War veterans who’ve returned home to Arlington. Just legs, though!

Perhaps the most intriguing establishment at Texas Live! (which includes, among others, Pudge’s Pizza, Troy’s, and Sports & Social Arlington, which, no lie, has beer pong tables) is a place called Miller Tavern & Beer Garden. From its website:

An emailer named Jim recently accused me of being a liberal Democrat. Perhaps he is right and I am here showing my bias, but if Bacon gets a big B, I’d certainly uppercase Citrus-Infused Quinoa. I think even Sarah Huckabee Sanders and I could find common ground on that menu-related matter.

Which brings me to the image of Miller Tavern & Beer Garden that I have taken from its website and displayed for you here in my role as a critic, clearly adhering to the fair use laws that govern copyright. I have comments to make about the people therein depicted. I’ve numbered the people to make it easier for you to follow along. 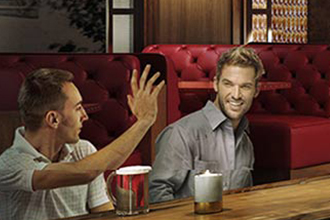 This guy drew a funny picture on his palm. 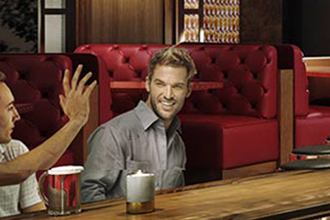 I wish I had someone in my life who looked at me like this dude, whose name I imagine is Colt, is looking at his friend’s palm. 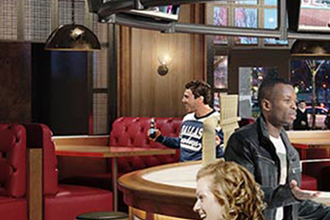 I’ve never seen someone so totally pumped to find an empty booth. 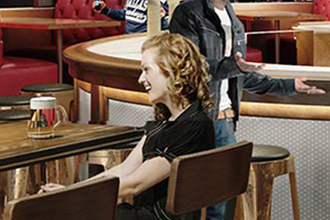 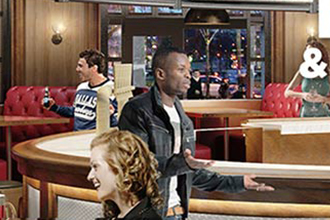 My man seriously cannot believe the grief that his lady is giving him right now. All he wanted was the opportunity to pair a world-class beer with an unparalleled dining experience. 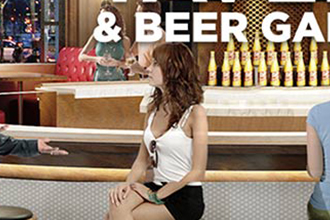 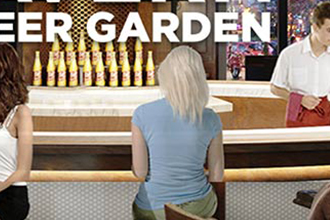 Here’s the lady my man is probably going home with, after he noshes on some Citrus-Infused Quinoa, Brown Rice, and Wheat Berries. Chicken or Salmon: his choice! 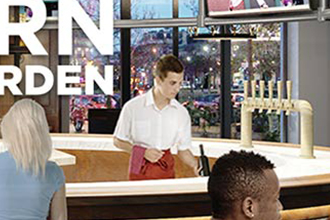 This bartender suffers from hallucinations. He is showing a bottle of wine to an imaginary customer. But we all now know that mental health is not something to joke about. He needs help. 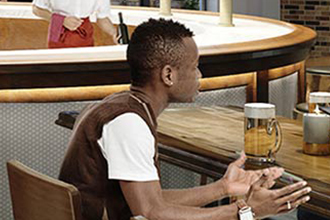 Some dude who digs sweater vests. 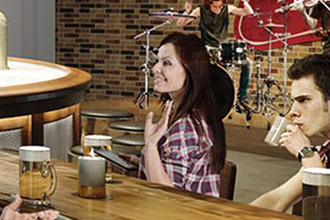 A lady waving to no one. 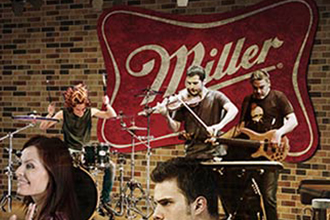 This band features drums, fiddle, and bass but no lead singer, and it appears that they are so bad that two customers just walked out, leaving behind their full beers. 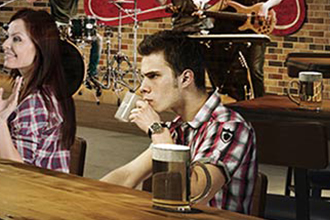 He has a full stein of beer, yes. But right now he needs a sip of coffee.

In summation, Miller Tavern & Beer Garden at Texas Live! creates a number of ontological and punctuational disconnections in my brain, if not my palate, given that I’ve never visited the place. But I’m glad that Rougned Odor turned his season around and finally started getting some hits. Go, Rangers!