Last year, my sister moved to Los Angeles and joined Soho House. Founded in London in 1995, the exclusive club effectively courted the young creative set, a group that tended to be famous. Recently, one of the club’s locations played a pivotal role in the courtship of Prince Harry and Meghan Markle. At Soho House’s Sunday brunch in West Hollywood this summer, my sister took a sly photo of Justin Bieber and Hailey Baldwin eating pancakes. (Cameras are strictly prohibited, but capturing that moment in celebrity history seemed worth it.)

Although Soho House has expanded to cities around the world, so far Dallas has been left off the list (Austin will be the first Texas location). But we may be getting something better.

By all accounts, Park House, a members-only social club constructed atop Highland Park Village, sounds a whole lot like Soho House. There’s a photo booth (Soho House’s branded booth is a clever marketing solution to the no-photos rule, which Park House will also enforce), a rooftop patio, and a junior membership option catering to the twentysomething set. But Soho House is hardly the only inspiration for the Dallas club, and the partners behind the project bring a particular expertise that may ensure Park House stands out. 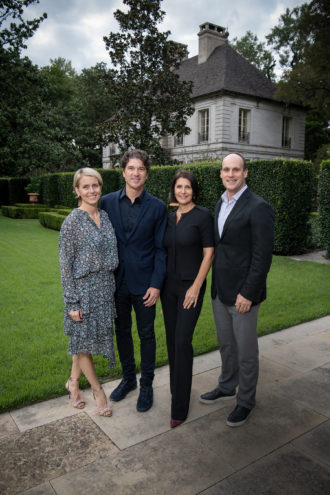 The four partners are comprised of two couples. One is entrepreneurial visionary Brady Wood and his wife, Megan, who own the hospitality, event, and marketing firm WoodHouse, the company that created Mexican restaurant José on Lovers Lane. The other couple is Deborah Scott and her husband, John, a former CEO of Rosewood Hotels & Resorts.

The Scotts’ return to Dallas was the driving force behind Park House. After four years in London, the couple had immersed themselves in the city’s club scene. “We enjoyed them and utilized them so much that we were worried about what we would do when we moved back,” Deborah says. “We had already been talking to Brady Wood, who had wanted to do something more like a Soho House concept, but when he found the location in Highland Park Village we wanted it to have more of an Arts Club aesthetic – something more refined. And Dallas just seemed like it was ready for it.”

Years of research and planning will be revealed to members when the club opens this winter. Anyone who has been to Annabel’s in London may find Park House’s Moroccan cigar lounge or peacock blue library similarly decadent. Fans of Chiltern Firehouse in Marylebone might recognize a familiar DJ setup or gallery walls reminiscent of The Arts Club in Mayfair.

The main difference may be in the company you keep. “We’re looking a little bit more broadly than Soho House,” Deborah says. “The No. 1 thing you have to be is interesting. You don’t have to be Old Dallas. We’re trying to do something that really brings a mesh of people together of all ages and backgrounds.”

For now, you can submit an application online (there’s already a wait list), but for what exactly remains to be seen. I’ve been to several Soho Houses as a guest, and, honestly, I’ve loved it. I’m not proud of the fact that in 2018, a year when so many of us are rallying for, among other things, inclusivity, I’d get such a thrill from finding myself at a members-only club. But one of those times, I did run into Reese Witherspoon.