When it comes to dress shirts, men are often forced to sacrifice functionality in the name of professional appearance. Mizzen+Main CEO Kevin Lavelle figured that by substituting performance fabrics for cotton, he could counter many of the undesirable aspects of the traditional button-down: the tendency to wrinkle, untuck, and put perspiration on display.

“When you’re working hard, our shirt’s going to move with you,” Lavelle says. “It’s never going to restrict you, whether that’s putting a piece of luggage in an overhead bin, running to the train, running to your car—and that’s absolutely essential for our guys.”

When we caught up with Lavelle around the recent opening of the brand’s West Village flagship store, he could not have been more enthused. “Dallas is our home base,” he says. “This is where we launched. This is our headquarters. This is us: Dallas.” 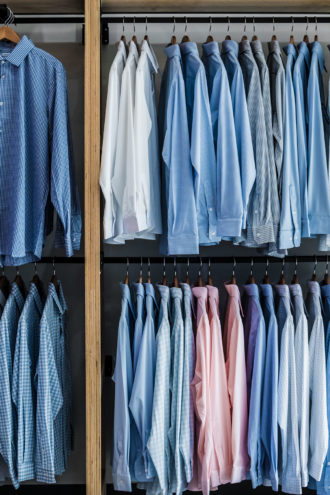 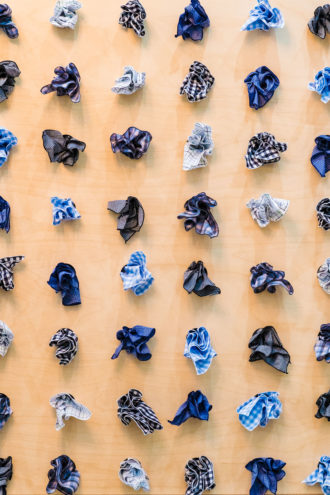 Elizabeth Lavin
The blues are still blue: Lavelle came up with the idea for dress shirts made from performance fabrics while a student at SMU. Mizzen+Main’s flagship store has a pocket square wall.

Lavelle conceptualized the Mizzen+Main brand as an SMU student interning in Washington, D.C. “I watched a guy run into a building soaked in sweat, and when he finally dried off about an hour later, he looked even worse,” he says. He wondered if performance fabrics, like those he had seen take over the golf apparel industry, could be the answer. The Mizzen+Main brand launched in July 2012, with the all-day dress shirt as its cornerstone.

Made from performance fabrics, Mizzen+Main shirts are inherently moisture-wicking and wrinkle-resistant, so they defend wearers against sweat stains and creases throughout the day. Four-way stretch gives wearers a full range of motion. Plus, they are machine-washable, which means no dry-cleaning bills.

On the Backs of Champions

Most of Mizzen+Main’s spokesmen are athletes, including golf legend Phil Mickelson, Houston Texans defensive end J.J. Watt, and Tampa Bay Buccaneers quarterback Ryan Fitzpatrick. Mickelson has even worn the shirts to high-stakes tournaments. “For us, athletes are a perfect demonstration of what our shirt is,” Lavelle says, “because these are guys who perform at the highest level of their sport, and our shirt performs at that level with them.”

Mizzen+Main shirts are currently sold at nearly 700 retailers nationwide, but the West Village store is the company’s first retail venue. In the loungelike setup, shoppers are served complimentary drinks as they peruse the pocket square wall.