Enjoy unlimited access to all of our incredible journalism, in print and digital.
Subscribe Now
Advertisement
Dog Friendly

The Lucky Dogs of Dallas

The Lucky Dogs of Dallas

2018, aka the Year of the Dog, is associated with good fortune, health, and love. With the city’s pack of canine advocates, dogpreneurs, pampering dens, and pooch-centric businesses, Dallas can enjoy all three. Time to meet some of the luckiest dogs in Dallas, along with the humans who love them. 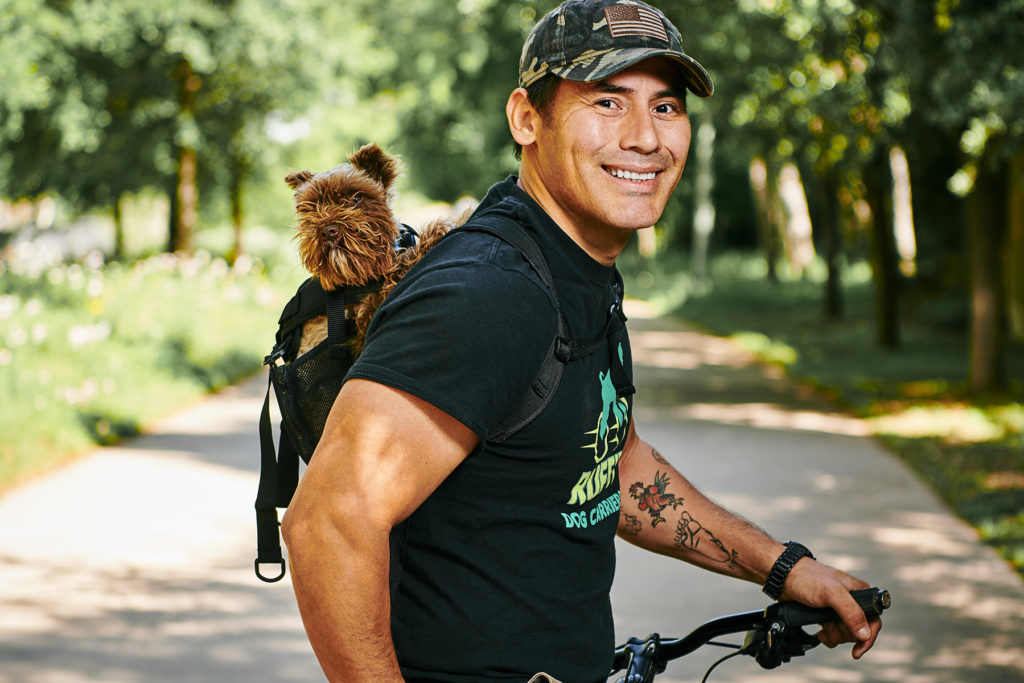 Jonathan Rivera was on a bike ride with his miniature schnauzer, Mojo, running alongside, when one of Mojo’s paws met the sharp end of a broken bottle. The then art director made quick use of his shoelace as a tourniquet and flipped up his shirt as a makeshift carrier. The idea for Ruffit Dog Carriers was born.

With that, Rivera quit his day job and created a pup pack prototype from an old suitcase, teaching himself to sew with the help of YouTube videos. It took four years to secure the three patents for his small-dog backpack ($70), which comes in four sizes and fits dogs 25 pounds and under.

In 2014, he moved to New York, and, in his first week in the city, met a woman on the street who introduced herself as Bobbie Thomas. Rivera told Thomas about his product, and she responded, “I might know someone.” “I actually thought she was hitting on me,” he says, unfamiliar with the Today show style editor. Within two weeks, Rivera was on air with Kathie Lee and Hoda. “We sold $30,000 in two hours.”

Rivera moved back to Dallas and grew the business. He swiftly realized Ruffit’s broader application for subway commutes and older or injured dogs. “It’s been a really interesting journey,” he says. “How often do you get to do something professionally that you love?” 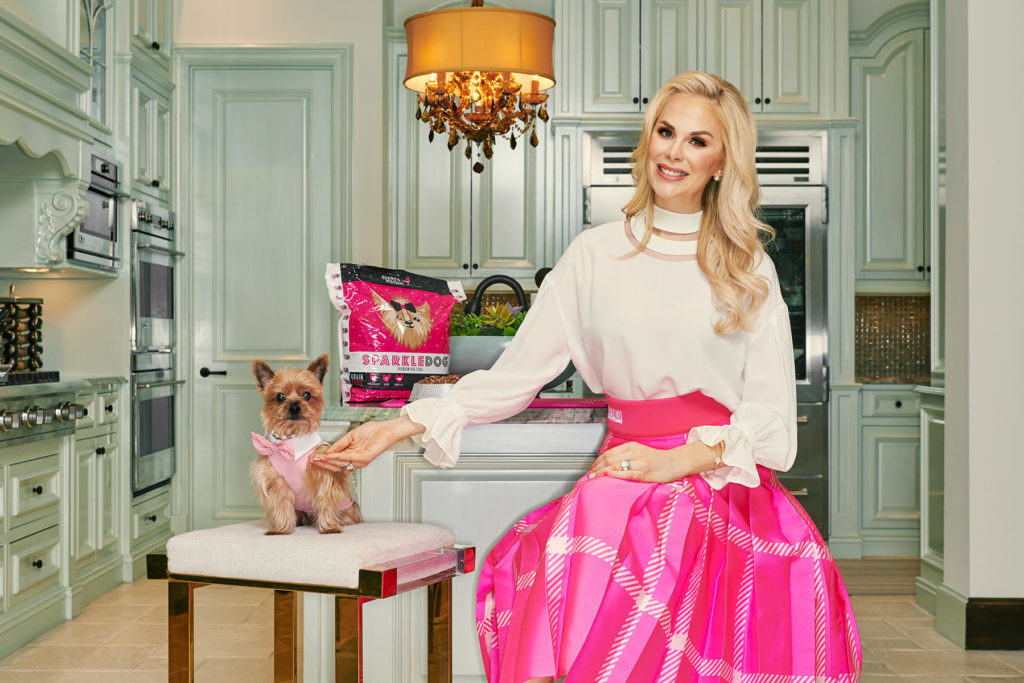 If you watched Kameron Westcott on last season’s The Real Housewives of Dallas, you’re familiar with the lithe blond beauty’s affection for the color pink. So deep is her love that she designed her line of SparkleDog pet food with heart-shaped bites in her signature shade. The posh chow came as a way to please her finicky Yorkie, Louis Vuitton Allen Westcott, who refused traditional options. “I thought, someone has to fashionize dog food!” she says. Then, a friend’s breast cancer diagnosis inspired a partnership with the Susan G. Komen foundation, another reason for the color choice.

With no business pedigree, the SMU fine arts grad and mother of two rolled up her designer sleeves. “I called 30 factories, and they all hung up on me,” she says. Westcott worked for a year with a pet nutritionist, a pet chemist, and a pet industry consultant to perfect the grain-free, gluten-free formula, which is produced in Texas. “Our first ingredient is chicken,” she says proudly. “There’s no corn, soy, or artificial ingredients.”

Admittedly, her fancy kibble has received mixed reviews on Amazon (she suspects some are brandished by fans of other RHOD cast members or competing brands). But this year, expect new protein sources, chews, treats, and doggy toiletries “like you’ve never seen before.”

Give a Dog a Bone 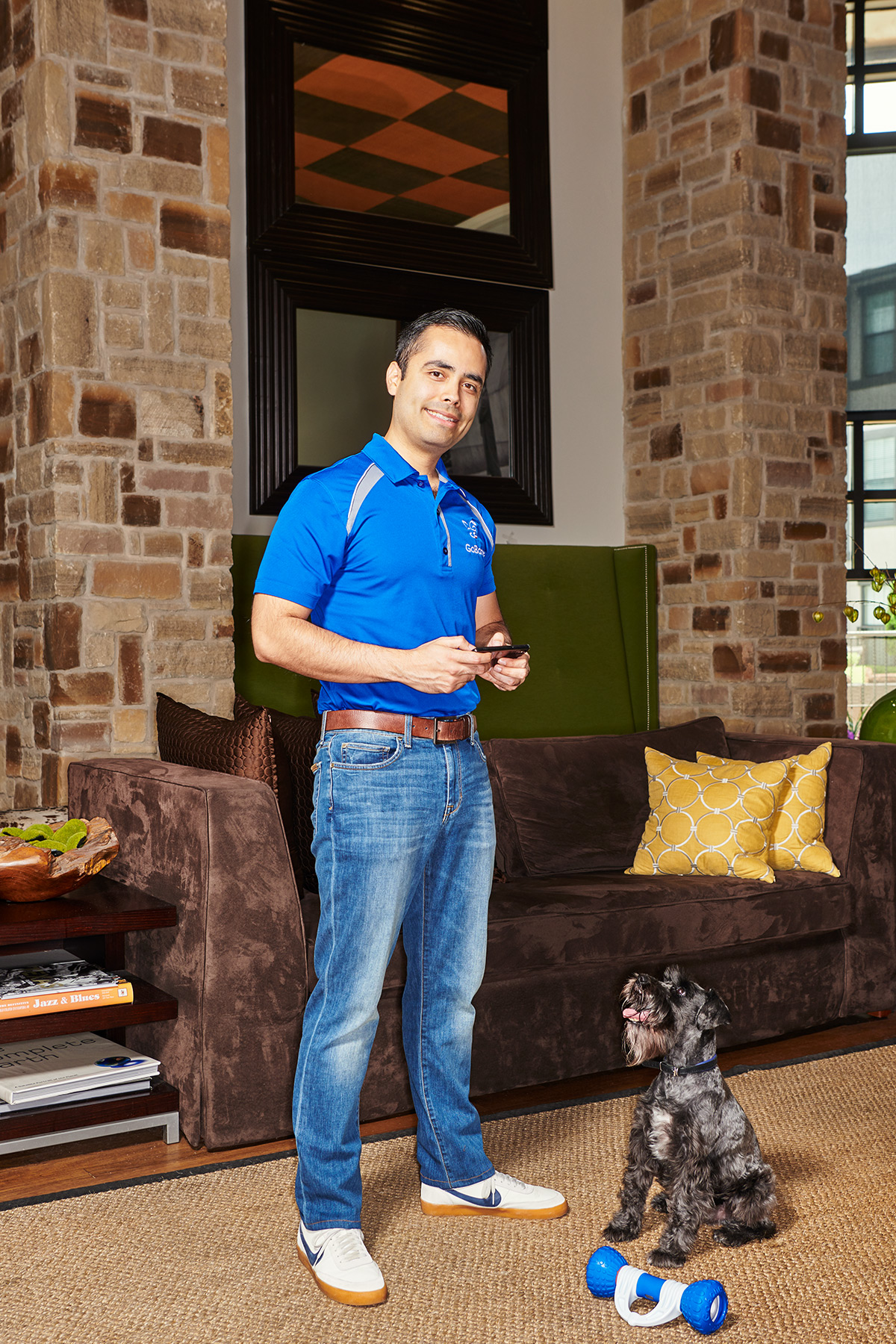 Move over Roomba. Dogs now have a new gadget of chronic fascination designed just for them. Santiago Gutierrez came up with the GoBone after finding it tough to entertain and exercise his beloved miniature schnauzer, Rufus, on busy workdays. His better hamster wheel? A rolling dog toy engineered with intelligent software that engages your canine automatically and autonomously.

“In the pet market, most of the technology involves cameras, but not in a way that entertains your pet,” he says. His locally manufactured smart bone can be controlled through an app and is rechargeable, generating eight hours of pet play. Algorithms automatically adjust to your dog’s age, weight, and breed. You can even record your pup’s daytime antics.

His high-tech, high-end toy ($199) is designed with a removable nylon exterior and replaceable parts in the event “it gets too much love.” The clever toy has already garnered some A-list attention, landing on Oprah’s list of her favorite things in 2017.

Gutierrez sees an additional beneficial use for his GoBone—in animal shelters—allowing visitors the opportunity to see a pooch at play, thus glimpsing its personality. The CEO plans to conduct studies to measure the impact of GoBone on adoptions. One thing’s sure: tails will wag.

Owner of The Kiki Style 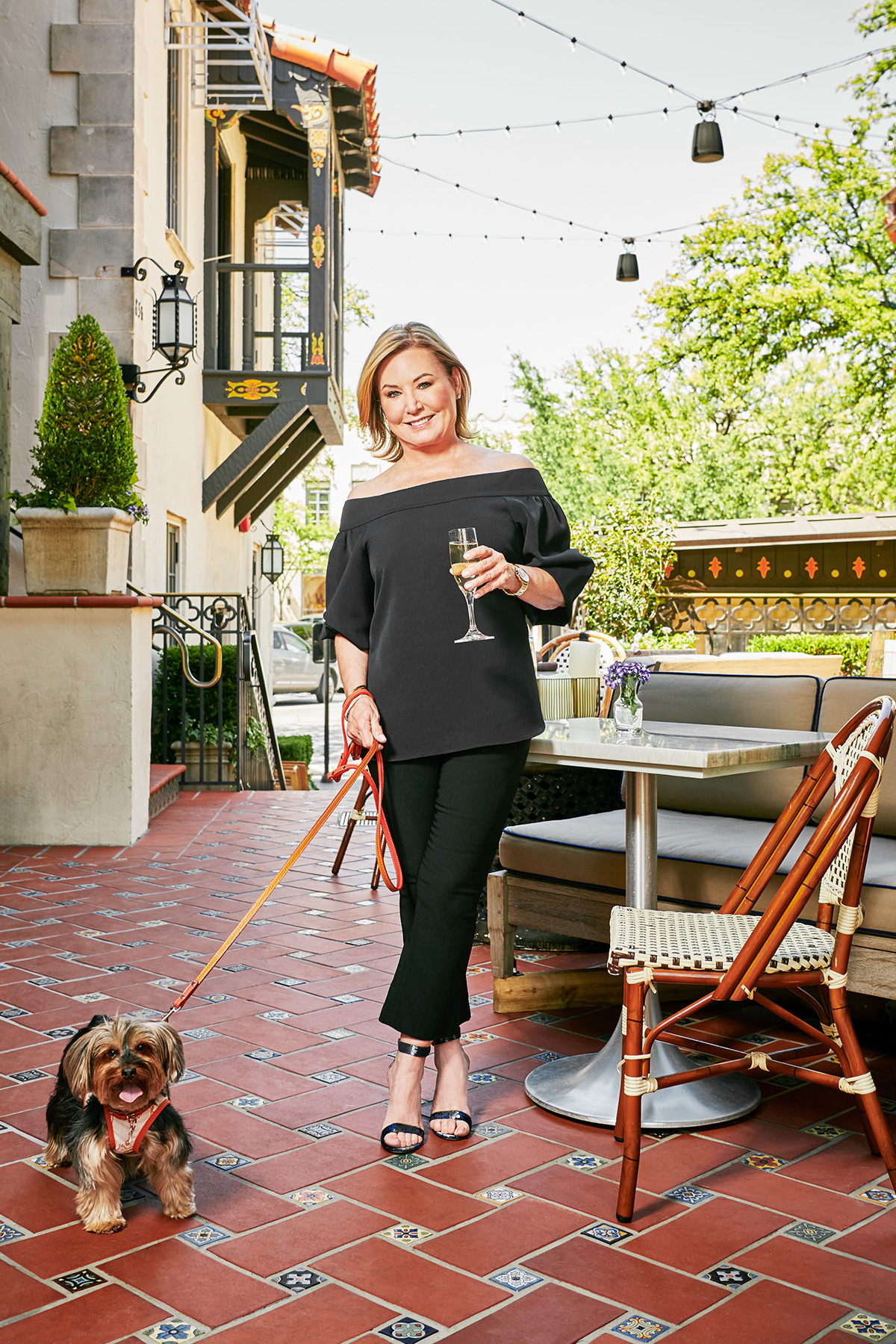 After Yorkie-mix Kiki slipped out of her collar during a walk, Jeanne Milligan realized the perils of controlling a small dog with a traditional collar—trachea damage or even death. She began searching for a harness that was both safe and stylish, and when she couldn’t find what she was looking for, the retired ad sales exec created her own line, calling it The Kiki Style.

The designer’s first collection of fashion harnesses, in embellished denim, faux fur, luxe silk brocades, and flannel plaids, debuted during the 2017 holiday season. “I’m a huge traveler,” says Milligan. “My designs are inspired by the places I go.” She found inspiration for her summer collection while traveling in Morocco. For fall, expect styles loaded with Parisian je ne sais quoi.

Milligan looked to Dallas-based David Sutherland for summer fabrics, and a collaboration of retail custom dog beds is in the works. “There just isn’t much out there if you want to match your decor,” she says. “Dog beds are always an afterthought.” Prepare to be bow-wowed. 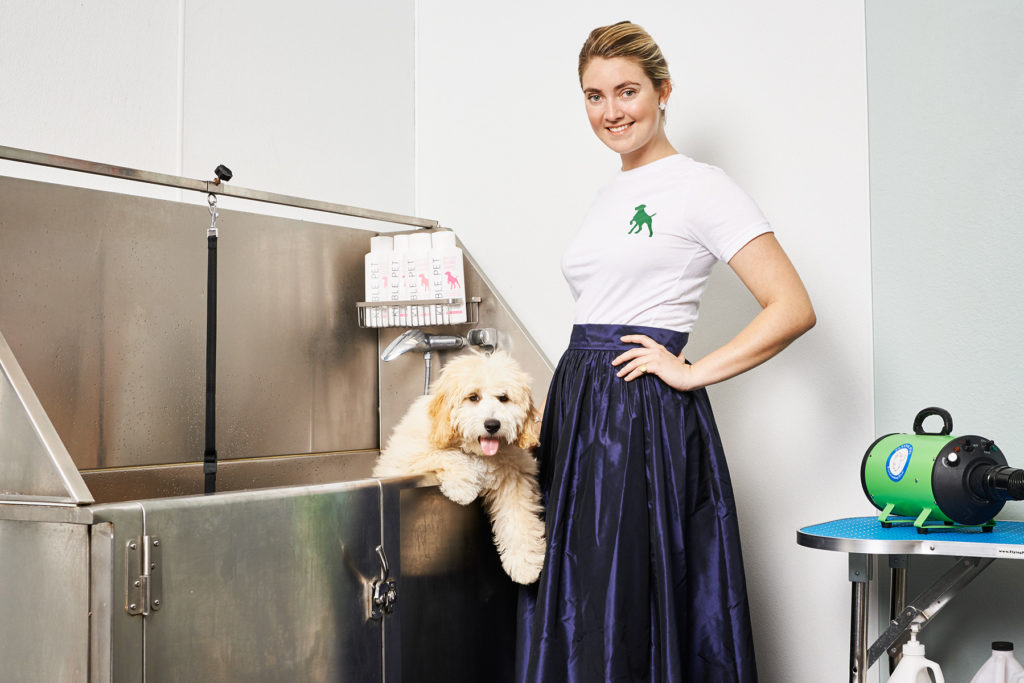 Much of Samantha Kent’s childhood playtime was spent in her mother’s hair and skin care product factory concocting her own batches from the shelves of goos and emulsions. Upon graduating from Parsons, the 23-year-old Florida native put her training to work in the development of organic, salon-quality products to expel the wet dog smell and impossible tangles from her two goldendoodles. “I couldn’t find a shampoo or dematter that did what it was supposed to do,” she says.

Kent launched Kibble Pet at the 2017 Westminster Kennel Club Dog Show. The brand borrows its name from the surname of Kent’s boyfriend, Matt, and his brother James, both of whom are investors in the company. In addition to shampoos and leave-in spray dematter, the line includes biodegradable soothing wipes and an organic balm ideal for cold climates where paws tread on salted streets. “I use it as a lip balm,” she says. The entrepreneur is now working on a shampoo and conditioning mask with diamond dust to strengthen the coat and impart a glimmer.

In June, Kent is set to open KP Groom, a posh pink-and-white dog-grooming salon on Sherry Lane. Owners can use the house iPad to select from a look book of doggy ’dos and choose from a menu of spa options: think blueberry facials and fruit enzyme treatments.

High-End Finds to Treat Your Dog