Enjoy unlimited access to all of our incredible journalism, in print and digital.
Subscribe Now
Advertisement
Personalities

How a Female Sportswriter Went From Covering to Coaching Football

After writing a WWII novel about a real-life female football coach, a Dallas sportswriter decided to become one herself.
By Kathy Wise | December 5, 2018|9:00 am

Subscribe
Advertisement
Marjorie Herrera Lewis discovered the story of her sportswriting career in her allergist’s office. The former Star-Telegram and Dallas Morning News writer had covered the Dallas Cowboys beat, breaking stories on contracts and trades during the Tom Landry years. But it wasn’t until she showed up for a pinprick test at her doctor’s office in Bedford that she found the inspiration for When the Men Were Gone, the novel she had always wanted to write and finally published in October.

Lewis’ nurse of more than two decades, Jean VanWaters, was trying to make small talk to distract her patient from the needle sticks when she noticed Lewis was wearing a Tulsa Golden Hurricane t-shirt.

“You like football?” VanWaters asked. “I love football, but all the women in my family love football because my great-aunt was a football coach in Brownwood, Texas, during World War II.”

Lewis was stunned. She knew all about legendary high school coach Gordon Wood, who led the Brownwood Lions to win seven state championships, but she had never heard of a female coach. She started peppering VanWaters with questions. Finally, she took a breath.

“I’m a sportswriter,” Lewis said. “Do you have a little bit of time so we can sit down? I’d like to write the story of your great-aunt.”

At the time, Lewis was no longer with the Dallas Morning News and was working on other writing projects. Over a series of lunches in Southlake, VanWaters told Lewis about her mother’s aunt, Tylene Wilson. VanWaters said that she and her sister spent summers visiting Tylene and her husband, John, churning ice cream in the backyard and listening to the grown-ups reminisce. Tylene was modest, but her family was well aware of her accomplishments. She had gotten a master’s degree in 1953, when a lot of women were lucky to graduate from high school. She taught at Brownwood ISD for 40 years, and for 18 of those years she was a principal. She didn’t have children, VanWaters said, so education was her baby. And so was football.

Tylene was in her late 30s when she stepped in to coach for one season, in 1942, after the high school football coach had enlisted. As VanWaters’ mother told her, “You just looked up and all the men were gone.” Tylene wanted to keep the football program alive because no one knew what would happen when they graduated. Tylene said she didn’t want them to resent their lack of a childhood when they were on the battlefield of Iwo Jima. 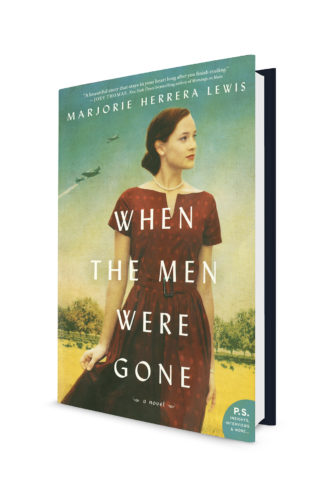 Tylene’s story resonated with Lewis. Like Tylene, she grew up playing football, learning how to throw a spiral from her mother, a rabid Notre Dame fan. As the first woman the Star-Telegram hired as a sportswriter, in 1984, Lewis experienced some of the same ridicule and skepticism that Tylene got as a football coach. And they both struggled to have children. Tylene was never able to have any, and Lewis endured a miscarriage and multiple hospitalizations from fertility treatments, all of which she hid from co-workers, before finally giving birth to two now-grown daughters. (Tom Landry called Lewis the day after the birth of her first daughter, in 1989, to congratulate her, saying, “I just hired a new coach. You’re missing all the action.”)

Lewis initially wanted to write a biography of Tylene, but when she started digging into Brownwood’s history, she discovered that the school’s records had been destroyed in a fire in 1960. With no background in fiction writing, she considered abandoning the project. But then she enrolled in the Mountainview M.F.A. program at Southern New Hampshire University and spent the next two years working on her manuscript as her thesis. Before the book was even finished, Lewis had an agent, a publisher, and a movie deal.

When the Men Were Gone isn’t marketed as young adult fiction, but perhaps it should be. With simple prose, Lewis creates a throwback heroine, dressed in white gloves and a pearl choker, who isn’t afraid to kick off her pumps to run down the field in her stockinged feet, despite the bullies and naysayers on the sidelines. Lewis sprinkles in historical details, such as the devastation wrought by the 1909 Zephyr tornado that killed dozens, the impact of segregated Army divisions in WWI, and the dreaded news delivered seemingly daily during WWII by soldiers on bicycles to the town on the outskirts of Camp Bowie.

But mostly the book explores a few life-changing weeks in Tylene’s life, as she prepares the team for its first game. It’s a story about what it took for a woman to walk into the principal’s office and tell him that she wanted to coach football, when no one thought a woman should. The book resonates because, even with the likes of Charlotte Jones Anderson in the owner’s box and Pam Oliver reporting from the field, football is still a male-dominated industry.

Which is why, after Lewis finished the book, she decided to coach.

when she was assigned to the Dallas Cowboys beat in 1986, Lewis was less than thrilled. At her first meeting with general manager Tex Schramm, he asked her how it felt to be assigned to cover “the best team playing the best sport in the world.” “I prefer college football,” Lewis recalls saying, in the postscript to her novel. “I didn’t ask for this assignment and I’d rather not have it.” Schramm called her a fool. Lewis snapped back, “Does the idea of a 29-year-old woman, 5 feet, 2 inches, give you comfort? Because if my appearance leads you to believe I’m a pushover, you do know you’d be wrong.” After that, she found she had the respect of both players and coaches.

With simple prose, Lewis creates a throwback heroine, dressed in white gloves and a pearl choker, who isn’t afraid to kick off her pumps to run down the field in her stockinged feet.

But there was a learning curve. Back in the mid-’80s, the team wasn’t accustomed to having women in the locker room. They had to put up curtains and signs warning players not to leave the shower area without some form of clothing. “The way the locker room was back then, instead of being one open room, it was divided into quadrants,” Lewis says. “I still remember, I was in one quadrant and Tom Rafferty, the center at the time, was sitting at his locker and I was sitting in a chair, talking to him. I had my back to the rest of the locker room. We’re talking, and at one point a rookie came up and tapped me on the shoulder. I turned around and he said, ‘I’m sorry.’ I said, ‘Sorry for what?’ He said, ‘I changed in your presence.’ I said, ‘I didn’t even know you were there.’ He said, ‘That’s why I changed. I knew you wouldn’t see me. But Everson Walls saw that I did that and he told me, “You go apologize. That was disrespectful.” ’ ”

Football itself was always the easy part for Lewis. Growing up before the enactment of Title IX, which was intended in part to provide equity in athletic opportunities for females, Lewis found there were no varsity teams for girls. So she played basketball and flag football on club teams and pitched on a boys’ softball team. She would sit in the car in the parking lot of the A&W and listen to college football games on the radio with her mother, who would explain the elements of the game.

Even though she couldn’t play tackle, Lewis was drawn to the warlike nature of the sport. “I love toe-to-toe competition,” she says. “I love the strategy, the moving parts. That’s what really appeals to me. It was like chess, from the perspective that I had. The football players out there, beating their brains out, aren’t going to say this is chess. But to a female, who didn’t have the access to playing and could watch it, it was, How can I outmaneuver you? How can I do something that you aren’t going to expect? How can I advance the ball? How can I beat you?”

She never thought she would coach. But shortly after finishing the book, Lewis heard that Texas Wesleyan University, in Fort Worth, was reviving its football program, which it had disbanded in 1941, when most of the football team collectively decided to enlist after the attack on Pearl Harbor. On December 7, 2016, 75 years to the day that lives in infamy and changed Tylene’s life, Lewis was accepted as a volunteer defensive backs coach. At the time, a reporter told her, she was the only woman in the country coaching college football.

“I knew I couldn’t just step in and start telling them techniques and all that kind of stuff,” she says. “My role was to observe. All those things that I had learned as a journalist—I knew what to look for. I knew what they’re supposed to do. So I was charting.” Quincy Butler, the defensive backs coach, would then use Lewis’ notes to determine his starting lineup.

Practices, which started at 6 am, were held at Poly High School, because Wesleyan doesn’t have a practice facility. “We would get there in the dark, under the lights,” Lewis says. “There was a rooster at somebody’s house that would crow during practice, in the dark. It was so surreal. We did that three days a week.”

On the first day of spring practice, Lewis was helping to set up the ball machine when she broke the tip of her finger on the first ball out of the chute. Then Butler asked her to throw some balls and have the defensive backs run routes. “Every release was excruciating,” Lewis says. “But I didn’t tell a soul. I have to tell you, that was one of the happiest days of my life. The pain only reminded me that I was a football coach. It was wonderful.”

Lewis coached for only one season. When she found out her book was due to be published in October, she decided to stop because she could no longer give it her all. But she hopes more women—like Tylene, like her, and like Jennifer Welter, a professional women’s football player and the first woman to coach in the NFL, for the Arizona Cardinals—decide to get into coaching. But, she says, it will take more than women simply taking to the field.

“It’s men who are going to give these women the opportunities, because there aren’t women there yet,” Lewis says. “I’m hoping that the men will say, ‘You do have something to bring to the table. You do have something that will make us better, regardless of whether you played or not, because you followed the game. You studied the game. You know the game.’ I’m hoping we’re on the brink of seeing that change.”

Get a front row seat to the best shows, arts, and things to do across North Texas. Never miss a beat.
Marjorie Herrera Lewis When The Men Were Gone

Every instructor has a favorite instructor.
By Estephanie Gomez
WTF