How many chandeliers? That is the first question anyone should ask on stepping into Nick Badovinus’ Town Hearth. Barring that, something about the incongruous pommel horse or the even more curious presence of a ’74 Ducati Sport.

At 8:30 p.m. on a weeknight, entering is like threading your way into a party already in full swing, the well-heeled and well-dressed a press of bodies at the eternally bottlenecked bar, where bartenders sling Aviations, sky blue with crème de violette, or Vespers twinkling with a slush of ice. The sommelier will tell you that the Chenin Blanc begs for lobster or Burrata (it does). The sparkling carbonic Sangiovese, served chilled, is a thing she calls “bro-sé.” These are better than a tiding over as you stand, your back jammed against the giant aquarium with a yellow submarine that offers a haven mid-chaos, as servers pull magnums of Champagne from silver basins piled high with pebbles of ice. Beyond them is the main dining room, with the drama of red leather banquettes, a silver MGB Roadster around which servers make intricate gyrations, and what feels like a million chandeliers. It is not a million, only 64. (The entire Timothy Oulton U.S. floor inventory, minus two destroyed in assembly.) In Badovinus’ windowless sanctum, 64 chandeliers—assembled by staff, crystal by crystal—add drama to excess.

Badovinus might be one of the savviest restaurateurs in town. With Neighborhood Services and Montlake Cut, he has garnered a loyal following that affords him quasi carte blanche. Now, like a big-name artist at the apex of his career, he’s built a monument to everything that’s come before, a volcanic eruption of stuff, a tower of glitz and kitsch that plays with the transportive power of a great restaurant. In the bathroom, there are razors and a voice on the radio that speaks to itself amid the white gladioluses, and, after a few cocktails, it is not difficult to imagine walking in to find someone shaving their legs over the sink, which is full of ice. Town Hearth is something like Badovinus’ unedited imagination and unchecked ambition, the place itself the definition of a mic drop.

If there’s one glaring weakness, it’s over-seasoning, a rookie mistake that marred a considerable number of dishes, particularly on my first visit. And Badovinus is certainly no rookie. In these moments I felt the downside of his bravado. (Throw more salt on it; crank up the music.)

Meanwhile, in this environment of big price tags and pedigreed meat put to an open flame, as at his other restaurants it’s Badovinus’ well-delivered retro classicism that tickles me. One of the simplest and loveliest starters is the Burrata served over a bed of greens. Oysters Rockefeller come tucked into the crevices of an escargot platter (because, why not?) on beds of silken creamed spinach. The carpaccio is aswirl with horseradish cream and the meatballs have dry-aged beef meeting smoked provolone—stupendous. Even the arugula and spinach salad is more interesting than it has any right to be. Some of these presage the meat to come. But first, concentrate.

There are many places to get a steak, but not with such swagger. Halfway down the menu’s second column, you come to the “primo” sides. This is where at other restaurants you might find truffle butter or artisan blue cheese. Here, “Oscar à la Plancha” means king crab nuggets, big as popcorn shrimp, that come quivering to the table over asparagus spears like a jewel-encrusted diadem lapped with Espelette-spiked hollandaise. (“Not since the fall of Rome,” you think—such decadence). One night, a special of “beef and broccoli” involves tenderloin and Szechuan pepper. This is also where you find (wink, wink) the sleek, silver ’74 Ducati Sport on the menu. It’s a joke, of course, but for Badovinus the machine’s appeal is not its flashiness but its simplicity, the epitome of the stunningly streamlined—quietly, confidently devastating. 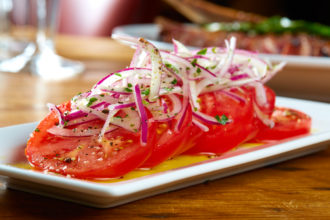 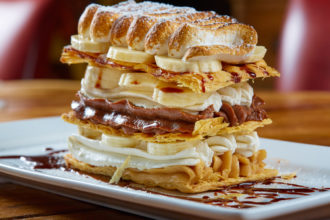 Simple sliced tomatoes provide the perfect bite paired with dry-aged beef; the King’s Napoleon, stuffed with bananas and peanut-butter mousse, is a worthy tribute to Elvis.

Remember this. Because now we come to the meat, a taxonomy of wet and dry aging. (Badovinus is committed to the whole animal, hence the menu’s liberal sprinkling of dry-aged beef that makes everything deeper and more resonant.) Here are all the classic, showpiece steakhouse cuts—strip, tenderloin filet, rib-eye. They join “rogue” cuts and meaty behemoths with names like Bistecca (a 48-ounce porterhouse anointed with olive oil) or Battle Axe, $125 of long-bone rib-eye, dry-aged 90 days, trailing an umami scent 6 feet behind, so potent you feel your whole frame thrill with an involuntary full-body shiver.

It would be almost impossible to go wrong. Nor will you be disappointed if you choose the whole trout almondine, its tender pink flesh accented by coarsely chopped almonds and a kiss of lemon butter sauce tang. Or the house-made fettuccine twined with Norwegian king crab, its carbonara sauce also rather brilliant.

Badovinus has long used steaks from Southeast Family Farms in Alabama at Neighborhood Services. Here, their Charolais-Angus cross, carcass-hung 21 days, holds a more prominent place. In the boneless entrecote (rib-eye), it isn’t the wintry depth and intensity of dry-aging that strikes you the most; it’s the way it feels in your mouth—a gush. Never has a rib-eye been at once so docile and full of flavor.

Most come boldly stripped of all ornament save a single grilled scallion. The house paradigm veers toward giving its meat a last rites sort of presentation—the green onion like a single lily you might lay on an altar. And so, among the sides—the cauliflower à la plancha that is ordinary, roasted corn served elotes-style that is Badovinus’ son’s favorite—seek out the simple sliced tomato to accompany your steak. They source five or six varieties, ripening them for another 10 days in the restaurant. Because this is a perfect bite: the funk of dry-aged beef; the ruby-red tomato; the pungent raw onion. In its simplicity—and in the middle of February—it’s decadent as anything in the decor.

When the meat was more dressed up I found it far less memorable, as in a wood-grilled veal chop bathing in an overbearing steak Diane sauce. Tender tournedos steaks were an unusual cut. Serving them forestiere-style with sautéed mushrooms and foie gras butter seemed a waste, over-gilding the lily. Even then, the kitchen almost—almost—gets away with it. You have to admire the romping audacity, the brilliant protein work, the appeal of the ethos—cheeky and irreverent.

One night, to finish, we ordered the King’s Napoleon, a tribute to Elvis, a stack of flaky-shaky pastry and peanut-butter mousse. Our appetites sated, our minds a-whir, we found ourselves spoon-deep in extravagant drifts, the hour edging further away from 10 p.m. and closer to midnight. My friend turned and asked, “Is there an afterparty?” There is no after. This is the party.