Errol Spence Jr. Might be the Best Boxer in the World

He knows Dallas is ready to embrace a local champion. On May 27, on Showtime, he’ll get his chance to give them one.
By Joe DePaolo | May 1, 2017|5:00 am
View Gallery
View Gallery

Errol Spence Jr. Might be the Best Boxer in the World

There’s nothing fancy about the R&R Boxing Club in Northwest Dallas. To quote one amateur boxer who trains there, “Air conditioning is when they open the door.” But then, it’s not supposed to be fancy.

You can smell the sweat the minute you walk into the place, which is largely occupied by 16 heavy bags suspended from the ceiling. There’s a speed bag on one end of the room and a full-size ring on the other. Boxing posters line the walls. Move the R&R to Philadelphia, and you can easily picture Rocky Balboa getting chewed out by Mickey.

“I like an old-school gym,” says Errol Spence Jr., the undefeated 27-year-old welterweight from DeSoto. “Hot. Grimy. Sweaty. Get water out of the sink. That makes real fighters.” 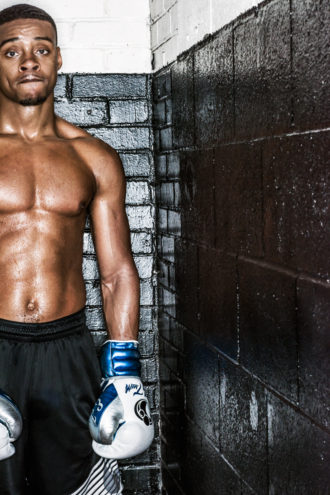 The sound of the buzzer echoes through the stifling hot gym, and the day’s training work begins. Spence floats to the center of the ring, circling Adrian Taylor, his sparring partner for the day. He eyes Taylor warily as he bounces rhythmically off the canvas, heels high in the air, content to simply dance around as long as Taylor will let him. This session is more for Taylor, whose upcoming bout is in a few weeks. Spence is operating at half-speed on this sweltering Saturday afternoon, throwing punches only sparingly in these early moments; even then, they’re mostly jabs. He’s only here today because he’s always here.

Even at nothing approaching his best, it is a thing of beauty to watch Spence navigate a boxing ring. Poetic, really. He prances about with fluidity, with grace. With the confidence of a man who knows he is in possession of superior, Baryshnikov-like gifts.

A boxer’s style can reflect his personality at large. Take, for example, the two greatest of their generation: Floyd Mayweather and Manny Pacquiao. Mayweather fights at a distance, not allowing anybody in, his guard almost always up. Pacquiao, conversely, often charges ahead, occasionally taking unnecessary risks, leaving himself exposed. Many would say the two men possess those traits outside the ring as well.

Spence’s style says two things about him that seem to be in direct conflict. The effortlessness with which he operates in the ring suggests an appreciation for comfort, a desire to stay with the familiar. Yet his aggression when pressed suggests a willingness to do whatever is necessary to succeed, however uncomfortable or painful it might be.

Taylor eventually engages. He throws several punches and leans on Spence, forcing him against the ropes. Taylor controls the action for the next several rounds until Spence decides he’s had enough. He starts to let his hands go, trading blows with Taylor in close quarters. Taylor takes the worst of it, even though he’s about 30 pounds heavier than Spence, whose weight class limit is 147. Frankly, that gap is the only reason this is a fair fight.

Errol Spence’s life will change dramatically, one way or the other, on May 27. That’s the night he is to fight International Boxing Federation welterweight champion Kell Brook, in Brook’s native Sheffield, England.

It is a match with enormous stakes. A loss would set Spence back, perhaps for years. At 21–0 with 18 knockouts, he is currently feared by many in his weight class. But if he emerges without a championship belt, there will be little incentive for prospective opponents to face him.

And make no mistake: Spence could lose. Brook has a stellar 36–1 record, with his lone blemish coming at the hands of the highly respected middleweight champion Gennady Golovkin. Brook moved up two weight classes for the opportunity to take that lucrative bout. He was competitive for five rounds before his corner threw in the towel. Against Spence, back in his proper weight class, Brook will be more dangerous.

A win over Brook on his home turf, on the other hand, puts Spence on a track for superstardom. It sets up potential multimillion-
dollar bouts in the near future, which is of paramount importance now that he and his girlfriend just welcomed their daughter Violet in January. The couple also has another daughter, 2-year-old Ivy.

“The stakes are a little bit higher now,” Spence says. “Two kids definitely make you a little more hungry, keep you more focused. This is the most important fight of my career. I have to show up for my family.”

But perhaps most of all, a win keeps alive the idea that Spence could become the best pound-for-pound boxer in the world. Skeptical? Ask the man who held the unofficial title of pound-for-pound king for much of the past decade.

Growing up in DeSoto, Spence was all about football. But he and his Jamaican-born father would watch televised fights together, cheering for heavyweight Lennox Lewis because of his shared Jamaican heritage. At 15, Spence tried boxing and took to it instantly. Just like that, his football days were over.

After becoming a success in local amateur competitions, Spence began training with Derrick James in 2008, when he was 18. Their partnership didn’t get off to the best start.

“I didn’t like him,” Spence says, laughing as he recalls the rocky beginning of a protégé-mentor relationship that has now lasted nearly a decade. “He was talking nonstop. ‘Do this. Do that. Do this. Do that.’ I was like, ‘Man, stop talking!’ ”

To hear the trainer tell it, they had worked together for three years before they had a conversation of any substance. Spence was fighting in the 2011 World Championships, held in the former Soviet republic of Azerbaijan. It was an expensive trip, so Spence went without James. The young boxer got homesick and began calling everybody he knew, just hoping to talk to someone. No one answered except for James.

“That was the first time we kind of, like, talked,” James says. “I don’t know what it was about, but we talked.”

The silence, on occasion, remains between the two. (“Sometimes we go to breakfast and there’s no conversation,” James says. “Not one word said other than what we’re ordering.”) But it’s clear that their relationship works. Just look at the results: under James’ tutelage, Spence won two U.S. National Championships and qualified for the 2012 Olympics, where he lost in the quarterfinals. Last August, his knockout victory against Leonard Bundu earned the largest television audience for professional boxing since 1998 with 6.34 million viewers.

James didn’t realize Spence was going to be this good when they first started working together, not long after James had retired from the ring. He boxed professionally from 1992 until 2008, and even trained with a young Floyd Mayweather back then.

“I could’ve never thought Mayweather would turn out to be that guy,” James says. “Just like him,” he says, pointing to Spence.

Spence has studied Mayweather’s career closely, hoping to learn from the best. “There’s always lessons to be learned,” he says. “He never got comfortable. Stayed hungry. Stayed dedicated.”

The trick will be to avoid the pitfalls. One crucial lesson from Mayweather might be to stay home. Mayweather, a native of Grand Rapids, Michigan, left for Las Vegas to further his career. But the bright lights and easy cash in Sin City changed Mayweather for the worse, according to many observers.

Spence says his circumstances are different.

“He had to leave,” Spence says. “There’s nothing really in Grand Rapids. For him to expand his career, he had to move to Vegas. But Dallas is huge, and it’s still growing. It’s a huge network out here, waiting for a star from Dallas to take over. That’s what I’m hoping to do.”

Which is why, six days a week, Spence comes to the R&R. More often than not, even when his training is done, he often stays for hours, giving interviews, taking pictures with fans, signing autographs. Doing the kinds of things that are about to become routine for a budding superstar, but haven’t yet.

It’s time to call it a day. Spence walks out of the gym into the scorching midafternoon sun. James follows him out, taking one last look around as he locks up, effectively turning off the air conditioning as he closes the door.

Be the first to know about Dallas' best events, contests, giveaways, and happenings each month.
Errol Spence Jr.

To Honor Him For Reaching 30,000 Points, Someone Sent Dirk Nowitzki a Potato

I SEE YOU, WEIRD POTATO!
By Zac Crain
Sports

We now return to YOGIMANIA, already in progress.
By Zac Crain
Sports

Whether the Rangers are good or bad, you can always depend on reporter Jim Knox to deliver. His interview with two (WINK) enthusiastic Irish fellas taking in their first baseball game definitely qualifies. Thank you Knoxie, thank you Killian and Shane, and thank you Deadspin.
By Zac Crain
D Magazine Directories