Several days before setting out on a hike in the Trinity River’s Lower Chain of Wetlands, I email Bill Holston, a mustachioed human rights lawyer and experienced trail-walker, to ask what equipment I will need for the journey ahead. Sandifer earns a living as an accountant, but this is his element.

Imagining a full inventory of survival gear—compass, flint and tinder for campfires, a machete to fend off wild beasts and hack through tangled underbrush—I am almost disappointed when he replies that I will require little more than pants, good shoes, and water. Because it snows the day before our scheduled hike in early January, and the weather forecast optimistically projects a morning low of 15 degrees, there is later some talk of long underwear.

After acquiring a pair of thermal long johns from Target, I begin to steel myself. Preparation, I vaguely know from my single year in the Cub Scouts, is important. My fear of snakes, surely prevalent in the forested areas of southern Dallas, is matched only by my fear of embarrassment. My time outdoors rarely extends past the trip between my apartment and the nearest 7-Eleven. I worry my distinctly un-Walden-like lifestyle of microwaved meals and fluorescent office lighting will be evident to the hardy bunch of naturalists graciously allowing me to tag along on their weekly Saturday morning hike.

So it is anxiety and cold, rather than a thrill for adventure, on my mind as I wake up hours before dawn and spend 30 minutes putting on boots, my brand-new long underwear, pajama pants, an oversize pair of jeans, a beanie, three undershirts, a sweater, a hoodie, and a pleather jacket. I put two pairs of socks on my hands and fill a backpack with protein bars, water, and a notebook before making the short drive from Oak Cliff to our rendezvous point, a parking lot near the Loop 12 boat ramp off of I-45, close to Little Lemmon Lake.

There I meet Holston, who carries a cedar walking stick and has a poet’s appreciation for the outdoors, regularly peppering his “Law Man Walking” column for D Magazine’s site with everything from Navajo prayers to Leonard Cohen lyrics. My own thoughts at this point are running in the unflashy prose of a newspaper article: “An early morning hike near the Great Trinity Forest ended in tragedy when a shamefully unprepared local reporter went plunging through a thin sheet of ice into an underwater nest of snakes.”

I am introduced to Alexander Neal, a student at Texas State University who, during his senior year at the School for the Talented and Gifted, wrote a 25-page report on the recreational, historical, and ecological significance of the Great Trinity Forest. We’re joined by Scott Hudson, director of the city of Carrollton’s environmental services department.

Our de facto leader, by virtue of his size and his Eagle Scout’s enthusiasm for kinesthetic learning, is Ben Sandifer. A 6-foot-8 accountant on weekdays, Sandifer sheds the suit and tie for hiking boots and flannels the rest of the time, and he may know the Trinity River corridor better than any man or woman alive.

Each of my companions are troves of environmental information, as are some of the other regular members of their usual hiking party, kept away today by prior commitments or icy roads: master naturalist Richard Grayson, the Catholic priest Tim Gollob, and Carrie Robinson, another master naturalist and Sandifer’s girlfriend. These are people who spend a lot of time walking or biking in Dallas, many of them meeting every Saturday to hike the Trinity Trails and elsewhere.

But it’s Sandifer who has become the unofficial guardian of the Trinity, taking the city to task for its repeated bungling of Dallas’ greatest natural resources—a giant pit, dug up for the construction of a golf course, is not far from the Loop 12 boat ramp—and evangelizing on behalf of one of the country’s largest urban forests.

His knowledge comes from experience, on weekend-morning treks like this one. As we walk north across Loop 12, past a sign that reads PRIVATE DO NOT ENTER, over a low iron fence, and into the wetlands, there is not another soul in sight. It’s so cold that one pond is coated in ice strong enough to carry a grinning middle-aged attorney, but I’m told the solitude is not uncommon, regardless of the weather. It is, of course, one of the reasons people get up at 5 am to go walking miles from the nearest wifi signal. 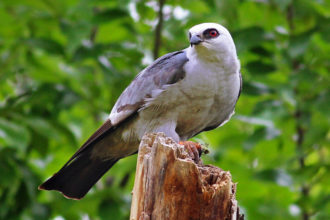 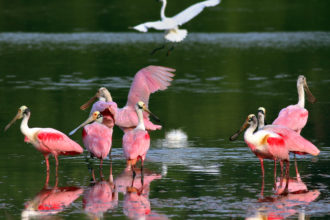 Winging It: Kite hawks and spoonbill cranes are just a few of the birds swooping around the Trinity’s wetlands.

There are sometimes fishermen from Joppa, the nearby community founded by freedmen in the 1870s. Sandifer has encountered Japanese tourists and bird-watchers, there for the rich avian life of the Trinity. Several years ago, before Dallas police began sending regular patrols along the trails at his urging, Sandifer recalls a couple of hairy run-ins with characters taking advantage of the isolation for less savory, more criminal means. But seeing other hikers is rare.

Walking along a paved trail and then further off into untamed, wooded areas, we occasionally come across the ugly detritus of human existence. The remains of the Riverlake Country Club, flooded and abandoned in the late 1950s, are close—Sandifer has scooped up old golf balls while walking here. Off the trail, we step over rebar left from the semi-aborted construction of the Joppa Connector Trail, partly intended to bridge this side of the river with the future site of the Trinity Forest Golf Club and the current site of its giant pit. Holston says in years past they would find trash, including broken-down Jet Skis and busted hot tubs, dumped by the trail entrance (across Loop 12 from the Trinity Forest Golf Club).

Mostly, it’s just us and the birds. I correctly recognize the ducks ascending and unfurling in large, billowing flocks; my companions, using binoculars and at least one magnificent camera lens, identify more. Early in our walk, we see a lone feral boar tumble across the path and into tall grass. It’s only later, after I ask whether wild hogs are an especially aggressive species—if threatened, or if an interloper in long underwear comes between it and its offspring—that Sandifer mischievously says he had tried to flush the creature out of the brush and toward us.

As we are heading back a couple hours later, we spot an osprey, floating with the showy confidence that belongs only to animals that kill from the sky. Ibis are also commonly seen around the Trinity’s wetlands.

There’s a sense of contentedness that comes from these walks, enjoying the subtle charms of the Trinity, Holston says. Every hike comes with new surprises, new things to learn, Sandifer notes. Walking alongside them, I learn that you don’t have to go far to get away. I learn about bur oak trees and ospreys and to appreciate the tranquility and the quiet adventure, watching mist rise off the water from a snowy bank.

I learn about the Trinity itself. It may never be called mighty or scenic, but it’s beautiful, and full of surprises. And, as Dallasites, Sandifer says, it’s ours.

This goes against much of what I believed about Dallas, growing up in its suburbs. Nature is for other cities, adventure for other people. Ours is a city of commerce and convenience, air-conditioned shopping malls and parks built on freeways. Our foundational myth is one of a middle finger toward nature. We conquer with concrete. We build golf courses out of forest and flood plain.

By 10:30, we are back at our cars. By noon, it’s warmed up close to 30 degrees outside and I’m in my long underwear eating pasta on the couch at home, 3 miles from downtown Dallas and 10 miles from the middle of nowhere. I think I will go back next week.