Four months after moving to Dallas, I stood at the reception desk at the Texas Health Presbyterian Hospital ER, struggling to articulate in a whisper, “I need to find the Dallas Area Rape Crisis Center.”

“I will get you a doctor,” the receptionist said, picking up a phone.

I’m Abi Grise, the hero of this story. I’ll spoil it for you: on nearly the three-year anniversary of escaping my rapist, I ran the BMW Dallas Marathon. But making peace with this city and reclaiming my body were more complicated than that.

I towed my Mustang from Kentucky to Old East Dallas on August 14, 2013, and moved into a century-old mansion that had been cut into studio apartments. The foundation visibly leaned, my bathroom door wouldn’t shut, and the landlord’s five dogs did their business in a bed of plastic flowers on the balding front lawn. Rent was $500, including utilities. I knew no one.

I was enrolled as a graduate student at SMU, but I quit on my first day of class after being offered my dream job as a copywriter for an advertising agency in Richardson. Things looked good, until they didn’t.

After the attack, friends suggested I cut my losses and retreat home to Kentucky. This wasn’t outrageous—I’d never had a positive relationship with my body, and forging through the freshman year of my career with post-traumatic stress disorder apart from a support system seemed unfathomable. NOT A SPRINT: The author, photographed at White Rock Lake with her medal from the 2016 BMW Dallas Marathon. She finished in the top 6 percent of women and top 14 percent overall.
Lucas Morgan

Some background: I started running in college for all the wrong reasons. I ran as a way to lose weight, even though I barely had any weight to lose. I ran for someone else, foolishly hoping to capture the attention of a friend I liked who dated skinny girls. I ran as punishment after a handful of Cheez-Its or a couple of cheap beers. I hated running.

After the attack, I didn’t run again for a year. Well-meaning people told me I was lucky to escape. The 911 operator, police officers, detective, nurse, DARCC therapist, my friends, my family. I said it, too. But I didn’t feel lucky. I woke at odd hours of the night, gasping from recurring nightmares of being choked to death. I backed myself into corners on the DART train during my commute, side-eyeing male passengers. Every time I shook hands with a man I’d never met, I’d wonder, Would he?

Along with a normal case of impostor syndrome at my first job, I quietly battled panic attacks in the bathroom. I confided in the wrong people. I made noncommittal friendships. I wondered if it would be possible to ever be inherently trusting again or feel at home in Texas.

After a year, I met a casual runner at Trees during an Ishi concert. We began dating and ran together along the Katy Trail. A boyfriend still wasn’t a great reason to run. It wasn’t until he quit the sport, the relationship fizzled out, and I continued running on my own that I accidentally fell in love with running.

Life is complicated. The strengthening of our muscles—including our hearts—occurs so slowly that we barely notice. Growth is nonlinear. Healing from PTSD, falling in love with running, and making Dallas my home were things I felt before I understood them. I was drinking water before I realized I was thirsty.

One mile at a time, the sharpness of PTSD softened. I attended free therapy sessions from DARCC in the offices of an old church. I walked to Deep Ellum and Lowest Greenville from my apartment, determined not to let one man scare me into becoming a shut-in. I explored the city, perusing the stacks of The Wild Detectives, going to concerts at The Kessler Theater, marveling at the taxidermic animals at Double Wide. I read Strange Peaches, Dallas Noir, and Love Me Back to study the nuances of my adopted city through other writers. I put in the effort to befriend co-workers. I doubled down to secure a promotion from junior copywriter to copywriter. I adopted a cat.

For years, I had assessed my body’s worth on sexual appeal. The attack was the breaking point. It took someone else reducing me to an object to understand that, unless something changed, I would never be happy. I had a choice: I could accept this man’s appraisal that my body was worthless and let him win. Or, I could treat my body as an extension of my spirit and feed it with kindness and patience.

Running made me health-conscious. I no longer cared about being skinny or pretty. I wanted to be strong. So I ran without makeup in old sweatshirts, with my hair in a lopsided braid. When it was cold, I blew my nose on my sleeve.

Running taught me patience. I forgave myself for walking. I bandaged my blisters. I sang to soothe myself as my toes turned pink during ice baths. I learned to listen to my body—cramping meant dehydration, sluggishness meant poor sleep, aches meant busted shoes. I noted the light of sunrise reflecting off street signs and car hoods, and the dew I kicked off blades of grass. I counted ducks, rabbits, squirrels. I felt my heart beat.

During the most difficult hours of running, I mouthed mantras. You’ve come so far already. You were born for this. Thank you. I gave thanks for my bad runs and my good runs.

Nearly every weekend last year, I hit the pavement for my long runs along White Rock Lake. Seven miles into the 9.3-mile loop, there is a part of the trail open only to pedestrians. As a ritual, I stop at a bench at the top of a small hill. In summer, sailboats glide across the skyline. In spring, Indian paintbrushes sway, and bikers whir on the path below. This is where I pause my music and my GPS app. I listen to my labored breath and feel my calves tingle. Then I list aloud, to my city skyline, at least three things I’m grateful for that day. It lightens my step for the last 2 miles. It is never a waste of time to reflect on the gift of your health and life.

After completing the Big D Half Marathon on April 10, 2016, I sobbed. For the first time in my life, I had done something with my body I was proud of, for no one else but me. I proved my attacker wrong, that this body was strong, beautiful, something to be revered. And I decided I wanted to run the full BMW Dallas Marathon on December 11.

Like many first-time marathoners, my goal was to finish. But I had other goals, too, such as being levelheaded, compassionate, and not assuming the worst in people. On the surface, it looks like these goals are not about a marathon. But, for me, running was therapy.

Hours early to the starting gun, I watched thousands of runners arrive. Some paced, jittery with nerves. Others stretched in custom t-shirts along the barriers. Running is a sport dominated by introverts, and I was surprised by the sheer mass of competitors drawn together after most likely training solo for months. By that point, I’d run 1,005 miles by myself.

I was placed in the first corral. Hundreds of toned, competitive athletes surrounded me. But instead of jealousy, I felt camaraderie. I knew the battles they’d fought to get here. Sprinkled throughout the marathon spectators were adults and children, arms outstretched, holding Tupperware containers of lemon slices. I had never heard of runners sucking on lemons, so at first I thought it was a joke. You know, “When life gives you lemons …” Turns out, runners suck on lemons for sugar, hydration, and to jolt themselves into a state of heightened awareness. If this isn’t a perfect metaphor for this story, I don’t know what is. 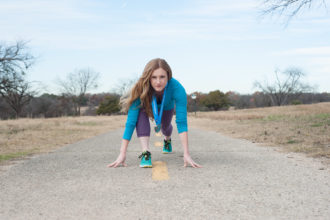 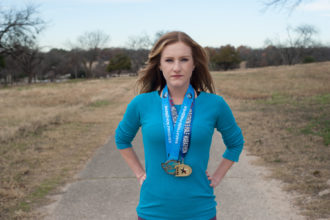 I have a secret to running fast. You ready? High-five the children holding out their hands along the course. Wave to spectators ringing cowbells and shouting encouragement. Thank every person offering Gatorade or Goldfish crackers from a folding table on their driveway. Gratitude gives you strength. Saying thank you is never a waste of time on your journey.

I finished my first marathon in 3 hours, 44 minutes. I ranked in the top 6 percent of women running the BMW Dallas Marathon in 2016, and top 14 percent of women and men combined. The numbers defied my expectations, but my real victories occurred while running at ordinary speeds, on weekdays I barely remember, in my ratty sweatshirt, around my apartment complex.

“If your legs are tired, run with your heart.” This was a sign I passed at mile 22. It’s true. The strength of your spirit carries you across the finish line. After all, the first marathon runner in Greece hadn’t trained for weeks on end. He ran for a cause.

At the end of the BMW Dallas Marathon, elite and Olympian runners—Meb Keflezighi, Desiree Linden, and Deena Kastor among them—stood at the finish line to present medals to the runners behind them. That’s when I realized I had a job to do. When we win battles, it is our duty to help others still fighting.

I didn’t choose to be assaulted. But I choose to share my story, to bring awareness to sexual assault, to show that PTSD is not a death sentence for happiness or success. Running a marathon hasn’t cured the lingering, possibly lifelong psychological and physiological effects of being assaulted. I’m jumpy. Catcalls terrify me. I can’t sleep in unfamiliar places. I close my eyes during violent movies. Nevertheless, I live a full life.

My story is bigger than my assault, just as the marathon was a fraction of the miles I ran last year. The highlights and shadows of our lives do not define us. This is how I honor those still fighting behind me.

My story is not extraordinary. One out of every six women in Dallas has been sexually assaulted. You ride next to us on DART, you pass us on the Katy Trail, stand behind us in line for lunch at Serj. We are your relatives, co-workers, friends. This is the tale of 1,183,799 women and 215,236 men in North Texas.

I moved to Dallas with the intent to earn my master’s degree at SMU and promptly leave. Three years was all I planned to give Texas. My story could have ended under a white flag after four months. But I stayed and made peace with this city instead.

As a result, my story includes drinking Blood and Honeys with friends at The Foundry, countless concerts at Granada Theater, hiking at Cedar Ridge Preserve, boogieing at Reunion Lawn Parties, wakeboarding at Grapevine Lake, Late Nights at the DMA, evenings at Bowlounge and Truck Yard, movies at The Texas Theatre, countless sunrises at White Rock Lake, throwing popcorn at Pocket Sandwich Theatre, eating foot-long hot dogs at Rangers games, writing fiction at the Creative Arts Center of Dallas, laughing to tears at the Dallas Comedy House, discovering mindfulness at We Yogis, eating deep-fried shrimp boil at the State Fair of Texas. And, now, running through the finish line at the BMW Dallas Marathon, with my hands in the air and my face lifted to the sky, saying thank you, thank you, thank you.

You can donate to the Dallas Area Rape Crisis Center at dallasrapecrisis.org. Abi Grise is the copywriter for D Magazine Partners, the parent company of D Magazine.