Mickey Ashmore left his finance job to sell his modern take on Aladdin slippers out of his Manhattan apartment. In December, the Dallas native brought his business home when he opened a second shop, Sabah House, on a quiet Uptown street.

How did you reinvent the Turkish shoe?

Sabahs are inspired by a traditional Turkish shoe that has a curly toe in the front and a pattern across the top. They’re leather-soled and more for indoor use. Turkey is very Western-oriented, so no one really wears them anymore. After college, I lived in Istanbul for work and dated a girl from the area where we now make our shoes. She gave me a pair, and I loved them. When I moved back to New York, the leather sole got destroyed on the streets, so I called the maker and asked him to make me a new pair. I asked him not to curl the toe up, sent him a nice piece of plain black leather, and had him stick a rubber sole on the bottom. That became my shoe. 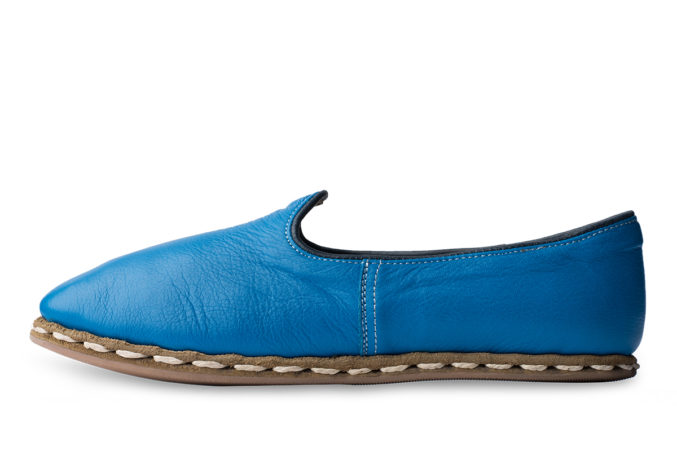 Then business grew out of parties, right?

I started having open houses every weekend. I called it Sabah Sunday. I would serve drinks, some food, and bring in music, and there were always shoes for sale in the background. When I would come home to Dallas for the holidays, I would always do a pop-up in my parents’ living room.

Where are the shoes made?

The town is called Gaziantep; it’s in the southeast part of Turkey about 75 miles north of Aleppo, along the Syrian border. It’s famous for pistachios, baklava, and meat. A byproduct of that is it’s also famous for leather. The place we make our shoes is just outside an old bazaar full of makers, so you walk through and one guy is melting metal to make a knife, there’s copper-making, and a big spice market.

And the workshop itself?

It’s in an old home that’s been owned by the same family for generations. It’s a long-standing workshop and one of the few left that makes shoes of this kind. When we started, we had fewer than 10 people, and now we have 25. Four of them are refugees from Aleppo. If you walk into that workshop, everyone’s drinking tea and there’s cigarette smoke. It’s old-world Turkey. When I go into town, we break bread together and have a meal. The energy and spirit of it are really beautiful.

What does “sabah” mean?

“Morningtime” in Turkish. My buddy said this was the shoe you put on in the morning. It just sort of stuck.