The green-tomato brown betty arrived in a pale slump, not pretty—we’d been warned—but how could we decline the challenge of a dessert that so blatantly played with the very notion of fruit? We fell on it like no one falls on green tomato, this jade-green mound, drizzled in cajeta, in tartness and texture masquerading as green apple, the mind abetting a trick of the taste buds. This was chef-owner Graham Dodds having gentle fun, the whole world of animal, vegetable, mineral a playground.

His new Greenville Avenue restaurant Wayward Sons feels too rustic to be trendy. Plaid banquettes in pea-green and yellow or nubby taupe and details like a framed cross-stitch of a mallard are not following a retro fad so much as warming a vast space with swatches of farmhouse (or is it dated ’70s lodge?) texture. Skill is paired with a refreshing indifference toward angling to impress. The sommelier is truly excellent, and he’s wearing a cardigan sweater. 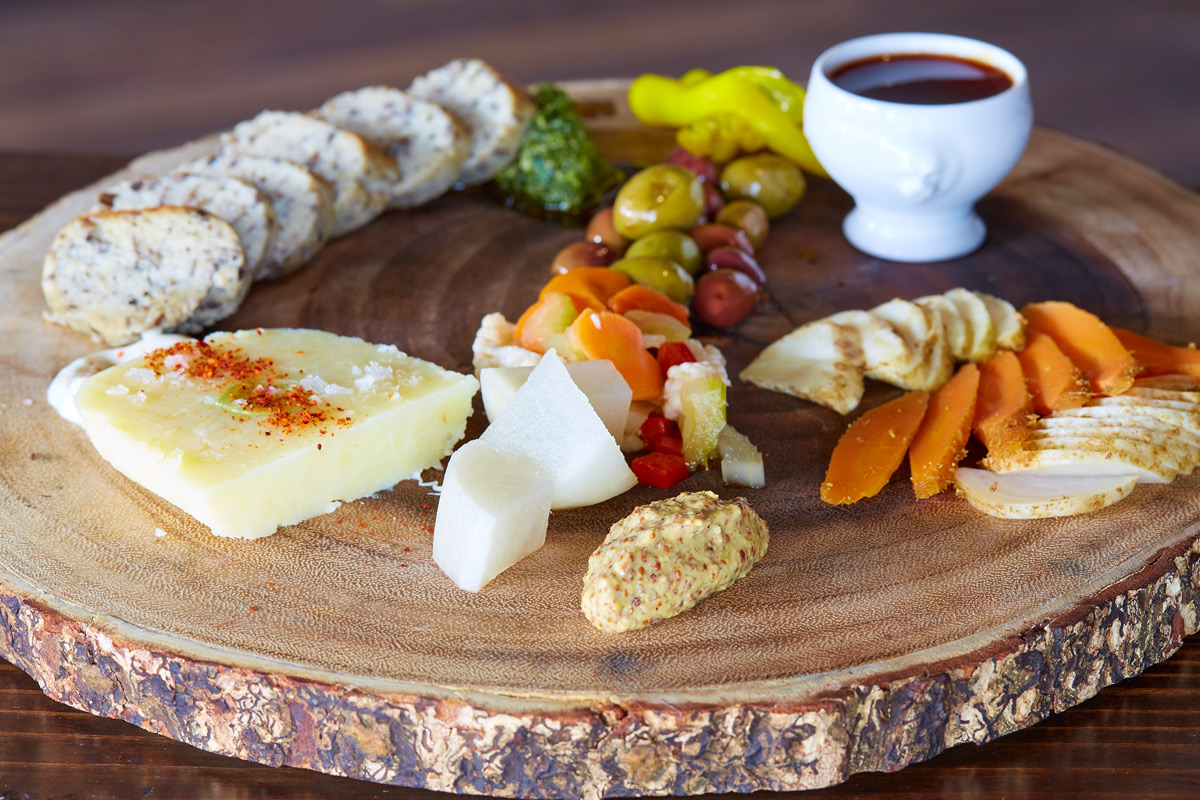 MEAT IS MURMUR: Dodds’ vegetarian “charcuterie” board might include lentil “sausage” and sunchoke “pâté.”
At the center is the bearded Dodds in his baseball cap—this uncannily compelling Pied Piper doing his own thing, perhaps here and now more than ever. With Wayward Sons, he collects what has defined him and presents it in a fresh, personal way, his mission still to make you fall in love with field and forest.

Anyone who has followed Dodds’ career will recognize the elements. The touches that reflect time spent in Switzerland and England, in Portland and on a farm-restaurant in Vermont, growing and foraging in various climes. You find the obsessively local sourcing he started at Bolsa, where he spurred Dallas’ movement toward the local and seasonal, and the moves he picked up at Hibiscus and Central 214, where he cured all manner of charcuterie. It all comes to a kind of fruition, with Texas as linchpin, a new lightness, and the European classicism that has always been his most natural vernacular. 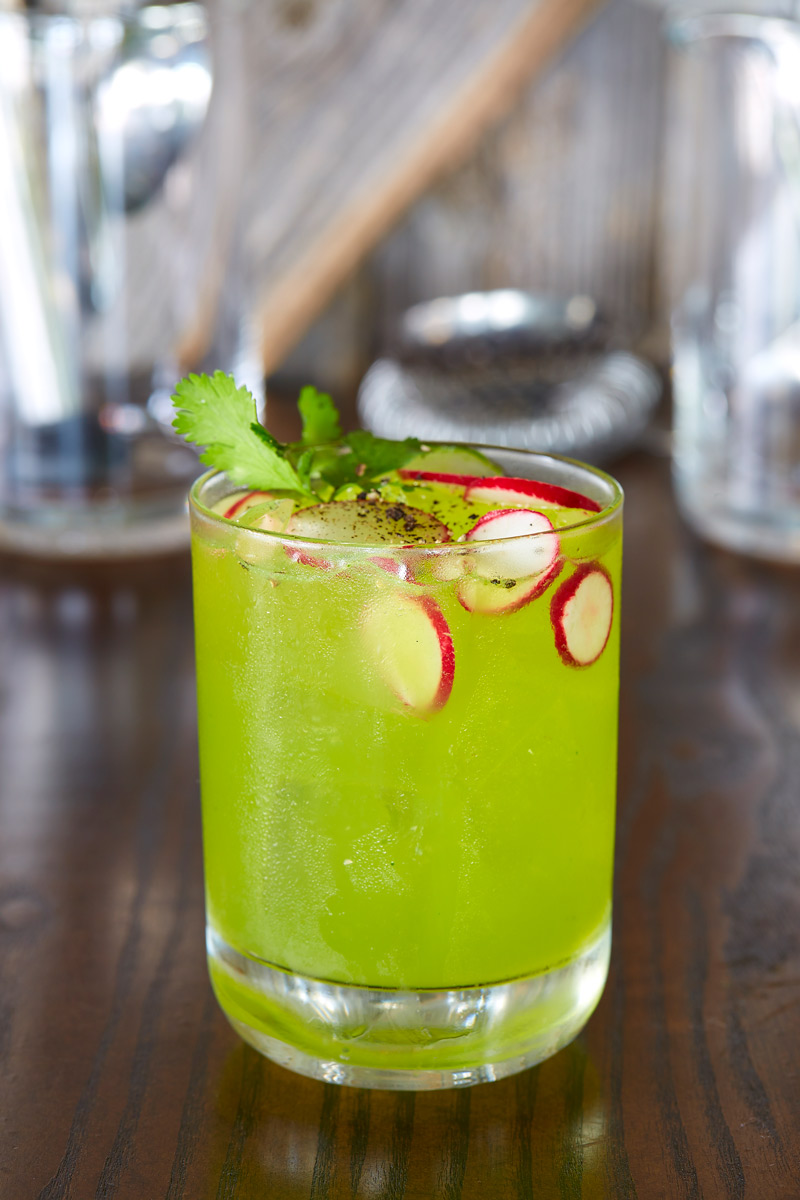 FLASH SOME GREEN: The signature cocktail—made for spring and summer with gin, Chartreuse, lime, and cucumber—is topped with radish slivers
Hence the fondue on the menu through early spring, velvet-bodied, made with local raclette, and served with cubed sourdough, but also green apple, Asian pear, and radishes in myriad pastel colors to scoop and swizzle. Dodds’ update, delicious and communal, made scenes at the bar look even more après-ski. A Waldorf salad of crisp, raw, julienned celery root with green apple and pine nuts was a cross, really, with céleri remoulade, its dressing a lightened apple cider vinaigrette with tarragon that nudges things even more French. “That’s what makes sense to me,” he says. “All these classics make sense.” He makes them his own.

The opening menu, transitioning from fall and winter, was the work of a root vegetable whisperer. They weren’t served roasted or in purées, bolstered with cream and butter, but as slaws, fresh and vibrant. For this to work, one needs exceptional vegetables, crisp and sweet. One of my favorites was parsley-root gnocchi. I live in admiration of a classic, light gnocchi. If possible, I loved these even more, executed à la Parisienne using pâte à choux pastry piped into soft eiderdowns in a whisper of leek broth with maitake and beech mushrooms, braised artichokes, and the shaggy, sloughed sheets of shaved ricotta salata, a tender dish like a dappled fawn.

The vegetarian “charcuterie” platter, about which much has been made, is not ultimately groundbreaking. Instead, it is more a natural extension of a sensibility written all over the menu, where slight reconfigurations pique interest.

Each visit, I found myself intrigued in small ways. A Gulf shrimp ceviche came mounded over a roasted half avocado, still warm and dusted with Espelette pepper, an unexpected balance of sultry and cool, with bright flashes of color from bell pepper strips ice-shocked into curls and little island sunsets of heirloom carrots sourced once a year from South Texas. 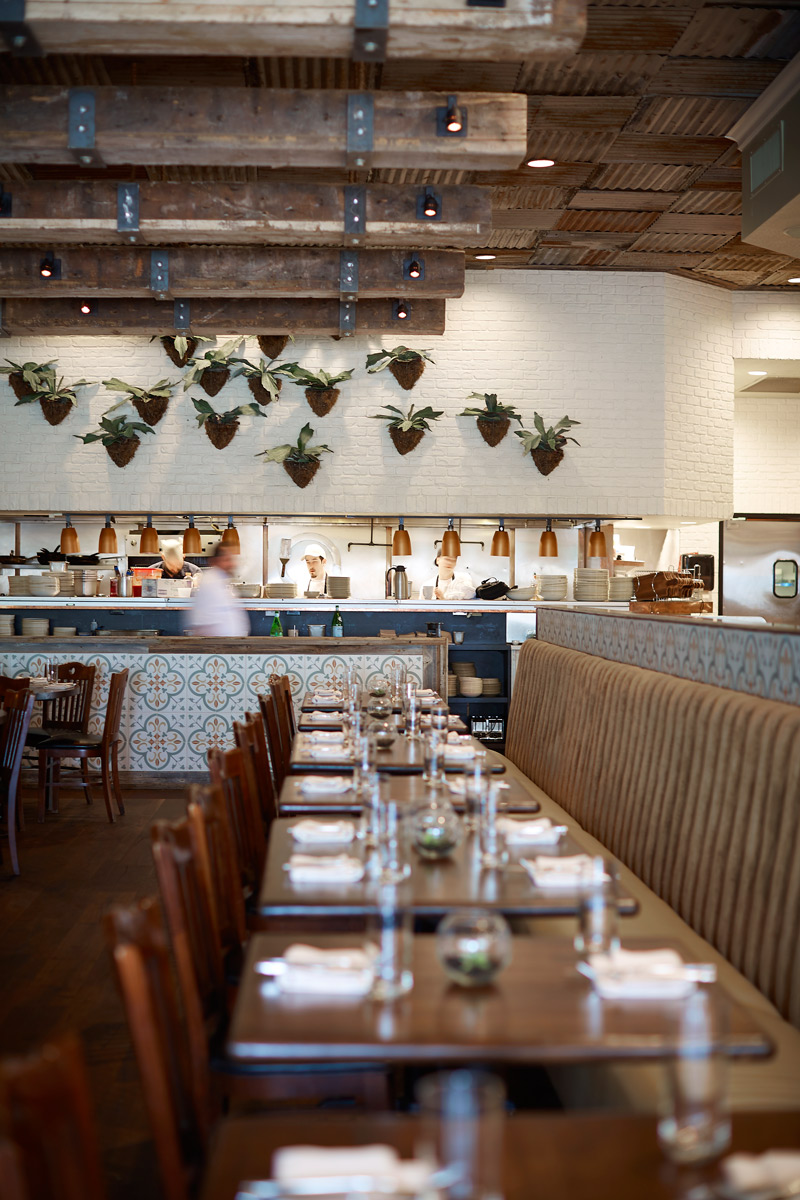 Plants grow above the open kitchen.
Bufala carpaccio wasn’t code for mozzarella Caprese. No, no, our server assured us, it was the water buffalo’s meat, far less common, not its milk. And here it was, tender, sweet, and so supple it gathered in soft rills at the nudge of a fork, the plate scattered with a dice of dried apricots and currants, popped farro that crunched, finely shaved San Isidro cheese, and something (what was it?) with a deeper resonance—almost-invisible flints of dark chocolate.

You will, meanwhile, find classic treatments of meat. At Hibiscus, Dodds had grown leery of sending out a 3-pound lamb saddle, 50 rib-eyes a night. Here, portions are slightly smaller. A lighter aesthetic reigns. Beautiful treatments of meat are likely to give equal attention to vegetables in polished ensembles.

Prime rib from Strube Ranch out of Pittsburg, Texas, a special one evening, came with carrots three ways: as a Bordelaise-like caramelized reduction, lush carrot-top pesto, and a pretty swish of shaved red carrots, carrot tops, and currants. A restrained horseradish crust undergirded the meat’s flavor.

Smoked lamb brisket’s marbling had the lusciousness of beef with lamb’s intense, delicious flavor. My friend’s wide-eyed leitmotif as she lifted morsels to her mouth—“It’s just like brisket!”—conveyed just what it should: the impact of a dish that registers as a small revelation. Elevated just a touch, chicken and dumplings spoke of celery and sang of comfort, with a silky, light velouté and tender pieces of Windy Meadows Family Farm chicken, the thigh confited and slices of the roasted breast delicately laid on top.

Dodds often reaches for currants for a touch of sweetness, and you’ll find little touches of the British scattered about, a testament to his roots. There are his mother’s preserves, inky purple, which she makes so you can spread them on flaky buttermilk biscuits.

If anything, my quibbles were about dishes that felt like slightly forced marriages. One evening’s special of rabbit had cool, anise-y flavors of tarragon and fennel seed. It came with shakshouka, that spicy, stewy Tunisian breakfast dish that’s so much fun to say, often spiced with harissa and cumin, here with Espelette pepper. Between the two, something was missing. The shakshouka’s spicing was wan. But mostly, it felt like two loves yoked without good enough reason.

So, too, a salad of three hearts of Little Gem lettuce drizzled with a light sauce. Someone wanting a Caesar may wonder where San Marzano tomato sauce and big, flat, oblong chickpea fritters came in. Partway through, it had dreamed of Provence.

And desserts can feel overly rustic, like a pretty, pink rhubarb pie with lemon curd and Chantilly that was less interesting than it looked, its lattice-work an echo of the trellises under which we sat, near the garden and where Dodds came out to chat. Dodds, at his best, has a singular ability to simultaneously make people feel at home and push forward. Trust him and he’ll lead, with the instincts of a mature chef, into experiences that are deeply intuitive and only gently surprising.