By 1937, the Southland Hotel couldn’t be called the best hotel in Dallas—the Adolphus held that title—but it served as suitable enough lodging for traveling salesmen and the like. Rising eight architecturally uninspiring stories at 1200 Main St. in downtown, the boxy Southland had a brown brick exterior and a lattice of fire escapes clinging to its front. County deed records didn’t reflect it, but police suspected that New Orleans racketeer Carlos Marcello secretly owned the building via the mobbed-up Maceo family of Galveston. The Southland’s bellhops could get you a hooker if you wanted, or some dope, and there was always a dice game going. Benny Binion’s dice game.

Binion wasted no time in setting up operations in the Southland once the city of Dallas ceased enforcing gambling laws. He located many of his dice rooms in downtown hotels, because downtown Dallas was a thriving, crowded place, day and night. Movie theaters lined Elm Street: the Rialto, the Capitol, the Majestic, the Melba, and more. Taverns were once again—with the repeal of Prohibition—open and busy.

To get to the Southland dice room, a gambler would cross the lobby and climb stairs to the mezzanine. At room 226, he pressed a button next to a door marked Private. One of Binion’s men slid a speakeasy-style vent, eyed the potential entrant, and decided if he would be allowed inside. On a normal night, the place filled with perhaps 50 men in suits drinking, laughing, and throwing dice. They played with chips stamped with Binion’s new trademark, a horseshoe logo. “We’d just have a big suite of rooms, have the tables in there, have a bar,” said Binion, who kept an office in a side room. “Everybody knew about it.”

Binion’s expanding operation quickly became known as the Southland Syndicate. In addition to the Southland Hotel, he and his partners operated or controlled gambling at the Bluebonnet Hotel, the Maurice Hotel, and at least 10 other spots in town. The Savoy, the Troxy, the Birdwell, and the Jefferson—all were his. Scattered across the city were dozens of others that he didn’t own but that paid him a 25 percent rake, the price of peace. It was no coincidence that those that didn’t pay were soon shut down by the police. Binion and Harry Urban also ran a slot machine company that serviced each of the gambling parlors. Bookies operated out of many of those same hotels, and Binion controlled them, too.

Many of Binion’s managers were veterans of his bootlegging network or were ex-cowboys too old and busted up to compete in rodeos anymore. Binion believed in the situational loyalty of these men and trusted them to take the necessary action—without having to call the law—when matters turned rough. Such was the case when, during a dice game at the Southland, some of Binion’s cronies found themselves in an argument with a player named Eddie Gilliland. One of them hit Gilliland in the throat, killing him on the spot. Then the crew loaded the body into a car, took it to the next county, and dumped it on the side of the road. Nobody talked about it, and few cared. “There will be,” an internal police report noted, “no solution to this murder.”

Some of the high-rolling customers who frequented Binion’s Top O’Hill club in Arlington became regulars at Binion’s downtown Dallas games as well. Howard Hughes, though one of the richest men in America, kept his losses at the table relatively small. “He wasn’t a high player,” Binion remembered. “I didn’t pay no attention to him … . I know he never lost $10,000. Might have lost $7,500 some time. It didn’t mean nothing to him.” H.L. Hunt, then amassing his fortune in the East Texas oil fields, had an office within walking distance of the Southland and would wander over at the end of the day. “When he wasn’t tired, he’d probably stay there and shoot craps all night. Daylight come, and he’d go home,” Binion said. Actor Don Ameche—he played Alexander Graham Bell in the 1939 biographical movie—was a repeat client. “He shot craps when he come to Dallas,” Binion said. “A crap-shooting son of a bitch, he was.” Local politicians showed up, too. “They’d come in them places. They didn’t give a shit much.” At least one Dallas County district attorney was among the regulars, personally escorted to the tables by Binion.

Not all of Binion’s customers were powerful officials or famous millionaires. Many came from a healthy subculture of professional gamblers. Dallas was boiling with them, their pockets stuffed with rolls of cash when they were winning, their heads full of schemes when they weren’t. Some of them plotted a dual income stream: either win money at the tables or steal it in a holdup on the street, often robbing other gamblers. When not serving prison time, these people were Binion’s bread and butter. One man who worked for Binion on and off for years said his boss made it a point to exclude working stiffs from his games. “Benny didn’t want truck drivers coming up there and losing all their family’s money,” he said.

The practice was part empathy—Binion never forgot the hard times of his youth—and part image control. He didn’t wish to be seen as someone running a fleece joint. Binion was, after all, a respectable businessman who counted among his friends the heads of some of the city’s biggest banks. “There was a group of bankers there, they were the most liberal, smartest bankers in the world,” he recalled. “There was never a smarter set of guys than them. They kept Dallas on top.” 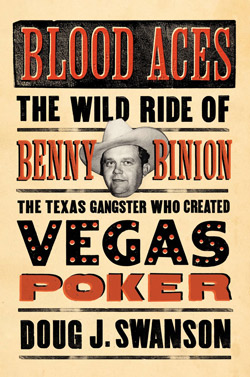 Back to Crime Issue