It’s quiet in this strip mall in Irving, which houses a Papa John’s Pizza, a karate studio, and an Indian place known for its goat curry and dosas. Inside Fortune House, red lanterns hang in a back dining room that feels like a treehouse, with views of the tufted treetops, water towers, and townhouses of Irving.

But we’re not there yet. My friend and I have planted ourselves before the window that looks into the kitchen, mesmerized by two women making dumplings, one deftly flattening circles of dough with a wooden dowel, the other filling and crimping with a thousand perfect pleats. The host, who has noticed our interest, disappears and returns with tiny balls of dough, which feel soft and silky between our fingers. “Chinese Play-Doh,” he says. 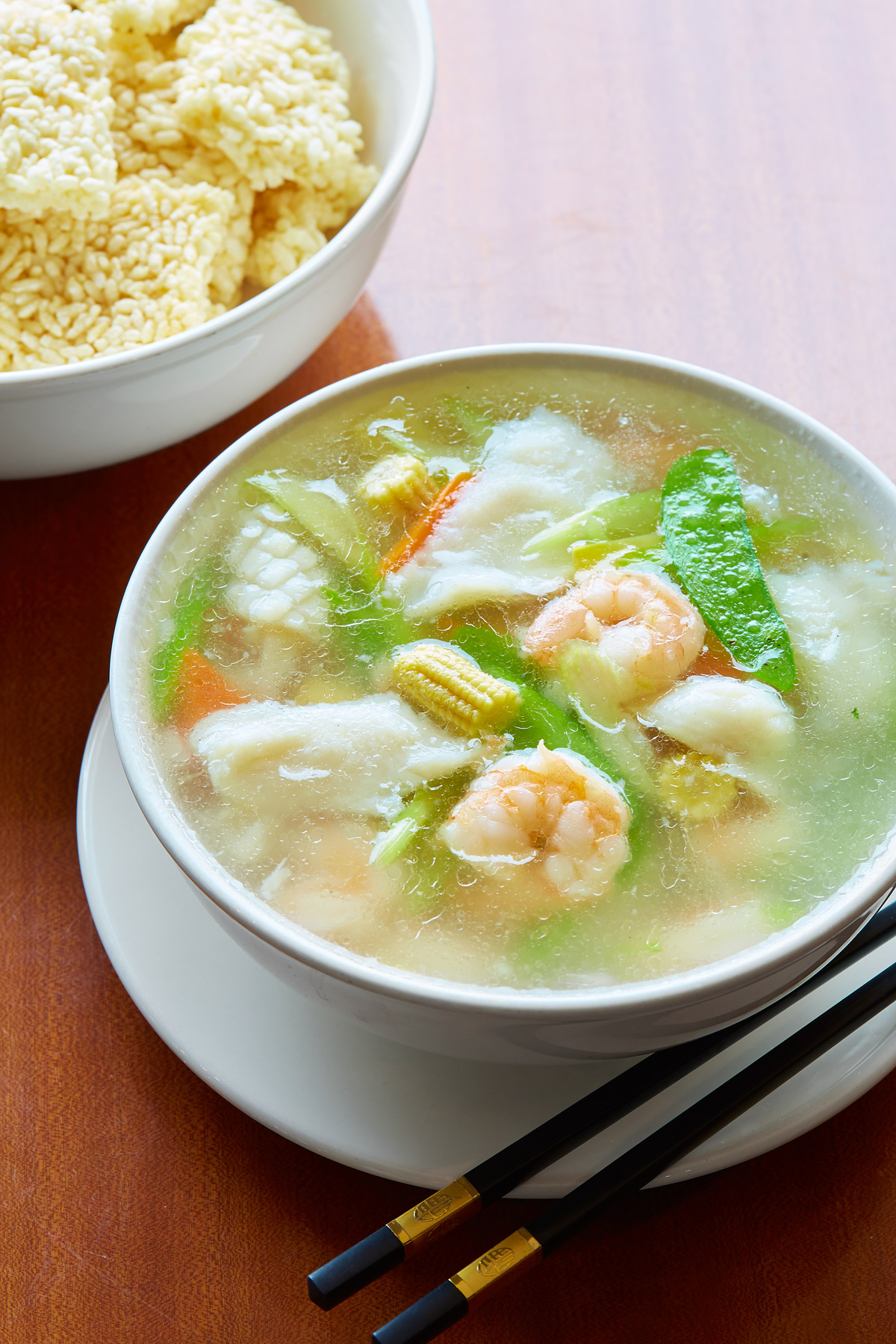 Crispy rice crackles as seafood and vegetables in broth are poured over it.
In juicy dumplings (more commonly known as soup dumplings), this dough accomplishes a singular feat, holding not only a pork-and-crab filling but also the golden elixir that emerges when the meat’s juices render. These dumplings are the reason we’re here. Nibble an end, and the broth spills into your flat spoon, silky-textured, with the natural sweetness of pork, the subtle flavor of crab. It’s buttery, liquid velvet. Saucers of chile paste and vinegar with strands of fresh ginger stand ready for dipping. I can imagine the noise and traffic of present-day Shanghai disappearing through the sheer transportative power of these parcels of goodness.

Shanghai is the capital of soup dumplings, where they are a subject of fierce connoisseurship, and rightly so. Fortune House’s owner, Lucy Yong, a Shanghai native who lived in Vancouver before moving to Dallas, craved these morsels most among her native city’s culinary treasures. “I missed the soup dumplings,” she says. “Shrimp Shanghai-style won ton soup and the Shanghai-style fried ribs—I missed this kind of food.”

Apparently, she is the kind of woman whose response to such longing is to lure from Vancouver her two favorite Shanghai-trained chefs—Ren Guoqing and pastry chef Zou Guifeng—and open a place that would re-create the flavors she craved.

Zou, with 15 years of experience, makes more than 100 orders of soup dumplings daily, Yong says, with eight to an order. “She is very picky. Other places, the skin outside is thick,” Yong says. “Hers are almost perfect: skin never broken, skin very thin, inside very juicy. Nobody can do it like her. She has some kind of secret.” 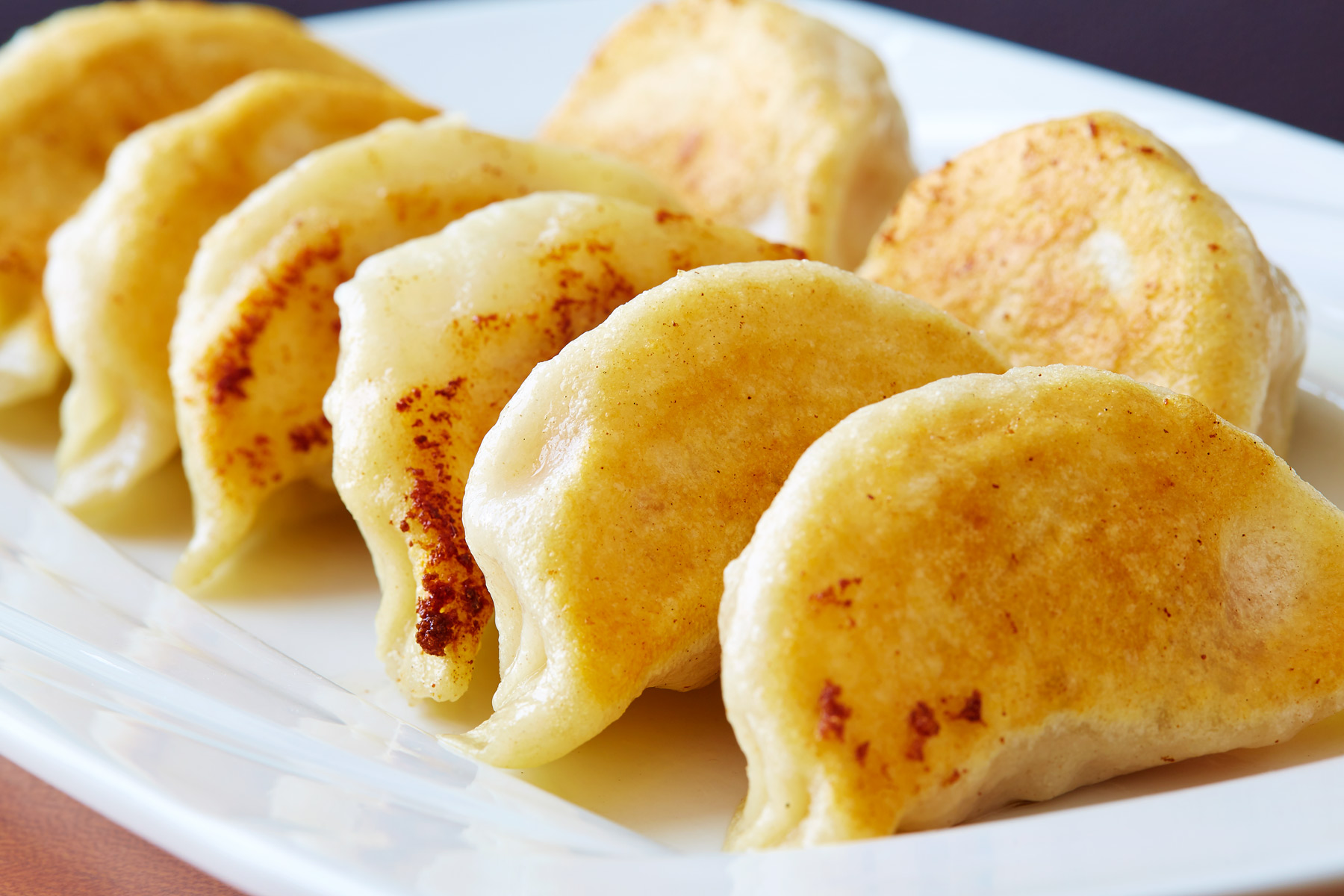 Pastry chef Zou Guifeng fashions a vast array of dumplings, like these filled with shrimp.
Everything that comes out of Zou’s phenomenal pastry workshop is delicious. Weekends starting at 11 am, there are Chinese doughnuts, long, fluffy-chewy tubes to dunk into bowls of freshly made soy milk, salty or slightly sweetened. The salted soy milk comes with chives, tiny crustaceans, and bits of doughnut floating like croutons. Oddly good for dunking, too, are giant rolls of sticky rice that hold a doughnut tube at their center and cotton-candy tufts of dried shrimp. Pan-fried turnip cakes, made to order—they take 25 minutes—are flaky, sesame seed-covered parcels stuffed with a wonderful mixture of shredded turnip, scallion, and finely diced ham. Stuffed pumpkin cakes are plump disks of rice flour filled with red bean paste.

“Nobody can do it like her,” owner Lucy Yong says of pastry chef Zou Guifeng’s dumplings. “She has some kind of secret.”

Yong has been looking for someone to assist Zou, particularly with soup dumplings, but without luck. “They can’t do it,” she says. “Not even close. I tried, too. It looks easy, but it’s not easy.”

To stay on Zou’s creations forever would not be an unrepresentative sampling of the treasures of Shanghai cuisine. But adopt a small-plate approach and you can discover more wonders, particularly if you stay close to the supplementary menu of Shanghai specialties.

Cold salads come in a range of flavors, quiet but distinct. Pale shards of vinegared jellyfish have a cartilaginous crunch. Cold braised beef shank, sliced, is like something you might put on a sandwich, with a hint of Chinese five-spice and sesame oil sheen.

Soybean curd comes in forms that reveal its intricacies. Spongy blocks, like bread cubes, had a sweet, almost bready flavor and soaked up the braising liquid in which black-capped shiitake mushrooms basked. Slices of firm, braised tofu sidled up to slivers of celery and carrot in a salad luxuriously accented with sesame oil. A plate of bright-green edamame was tangled with ribbons of bean-curd skin. Darker green flecks, the preserved vegetable indicated on the menu, tasted not pickled but faintly tart, like sorrel. “What is it?” we asked our waiter. He returned with a translation on his cellphone: potherb mustard.

Beyond small plates lies a world of hot entrées. Crispy rice cakes arrived in an empty bowl and crackled and settled as the waiter poured over them a prodigious quantity of seafood and vegetables. Their crunch was delightful, their flavor lightly toasty. “So the Chinese invented Rice Krispies,” my friend quipped. The broth, seafood, and vegetables were bland. But the experience of this crackling cauldron was special. 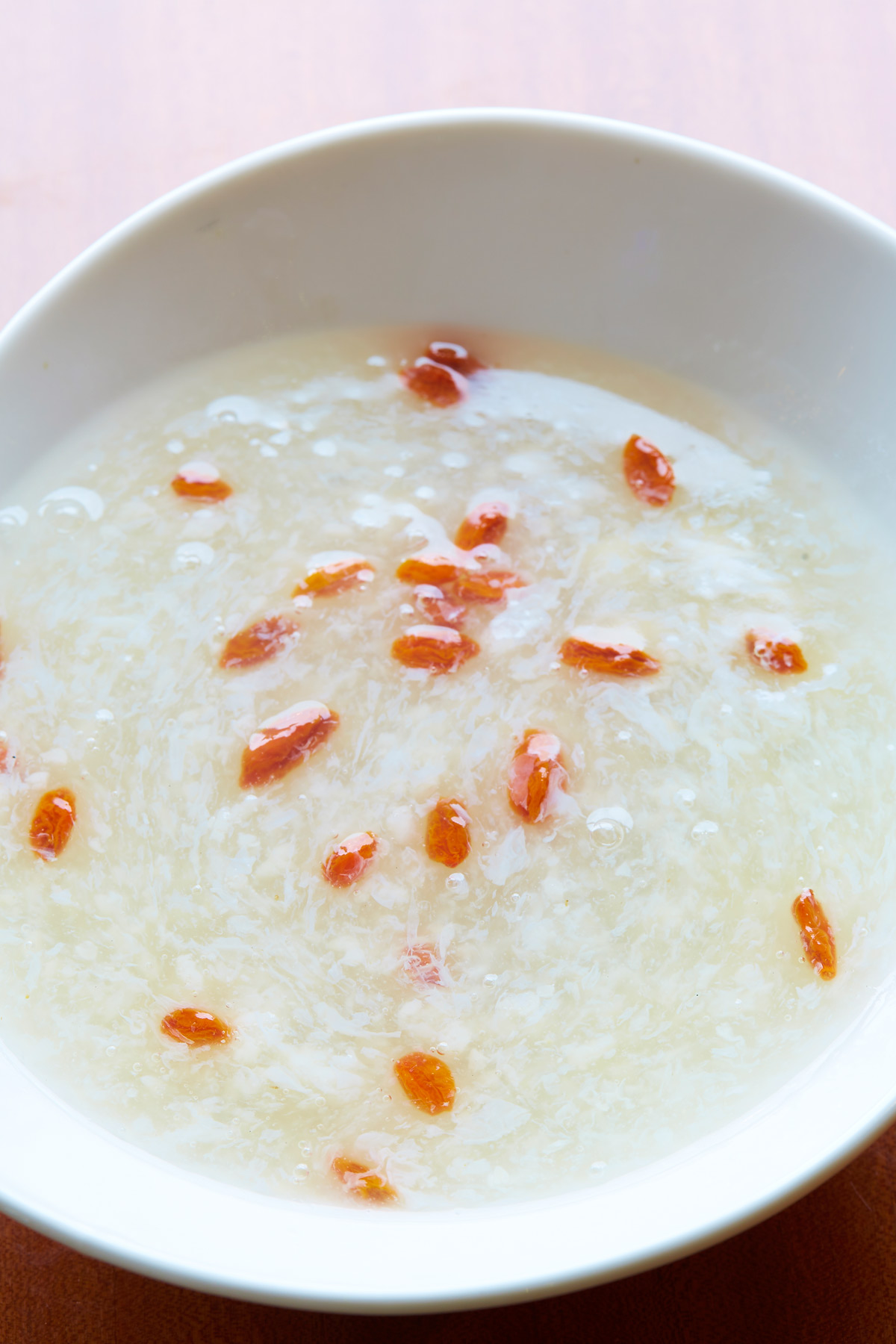 For dessert, rice-flour balls and egg float in a rice wine-scented broth with goji berries.
Many of the hot dishes’ flavors leaned bolder. Dandan noodle soup with pork and smoked fish (delicious, almost candied) had a richly peanutty broth and red sunset of chile oil. Knuckles of basil chicken crowded a clay-pot dish fragrant with garlic, ginger, and fermented black bean paste. Our waiter carved braised pork knuckle from the bone tableside, leaving slabs of tender, Chinese five-spice-scented meat to bathe with blubbery caps of mahogany-colored fat and strands of spinach in the slightly sweet sauce. Small morsels of the fat, stolen indulgences, were like savory, buttery caramels, and the dish, slow-braised to unctuousness, was like Shanghai’s answer to soul food.

The plates kept coming. Families fanned around Lazy Susans reached for flaky scallion cakes cut into triangles, fried rice, and dishes with big, flat noodles, where oil ran orange with chile spice. In Shanghai cuisine, sauces, heavily inflected with sugar and dark soy, are often reduced to sinister lacquers. And here is where I didn’t love the menu as
much, when syrupiness lacked complementary freshness.

Things almost ran off the rails with the sweet-and-sour grouper. It arrived gaping ghoulishly from under a nap of sticky-sweet, shockingly orange sauce, liberally thickened with cornstarch. We reeled back. The fish was tender, but the canned-pineapple creation was too much for us. (It’s easy to forget that this sauce, with its gelatinous consistency, is not just an Americanization.) The staff sensed and handled our unspoken panic by graciously removing the platter and quickly steering us toward a dish of boned whitefish with a simpler sauce of tomatoes, onions, peppers, garlic, and ginger.

For dessert, there is mango pudding, four vibrant yellow squares of gelatin and fresh mango flesh. Or a more unusual find: a bowl of tiny rice-flour balls in a light broth subtly scented with rice wine. As in egg drop soup, strands of egg coil like mermaids’ hair, and goji berries float on top. It’s a variation on the vast repertoire of lightly sweet dessert soups (often with red bean or tapioca). And should you desire, there are more dumplings, of course, lovely ones filled with sweetened black sesame.