In the center of a 14,000-square-foot warehouse that was once a Ford Motor Company plant in East Dallas, a massive hunk of aluminum sits like a twisted starfish on a concrete floor. Its silvery arms are tarnished, and inner surfaces that were once covered in gold leaf are corroded and rust-colored. This is artist José de Rivera’s sculpture A Wishing Star, and it was once the glamorous center-piece of a courtyard in the Statler Hilton hotel in downtown Dallas. For the last few decades, however, A Wishing Star has been stored in the backyard of a home in East Dallas. When the cracked and corroded artwork was rediscovered by the developers behind the Statler redo, they knew just where to turn: Michael van Enter.

Since arriving in Dallas in 1999, van Enter has become the city’s go-to man for art restoration, salvaging much of Dallas’ oft-discarded and forgotten cultural history. The native South African has worked with most of the local museums (not to mention MoMA), services major collections like the Rachofskys’, and is responsible for saving a number of artworks that nearly fell to the wrecking ball, like the mosaics now housed in The Joule hotel and artist Octavio Medellin’s glass windows now on display in Dallas City Performance Hall. 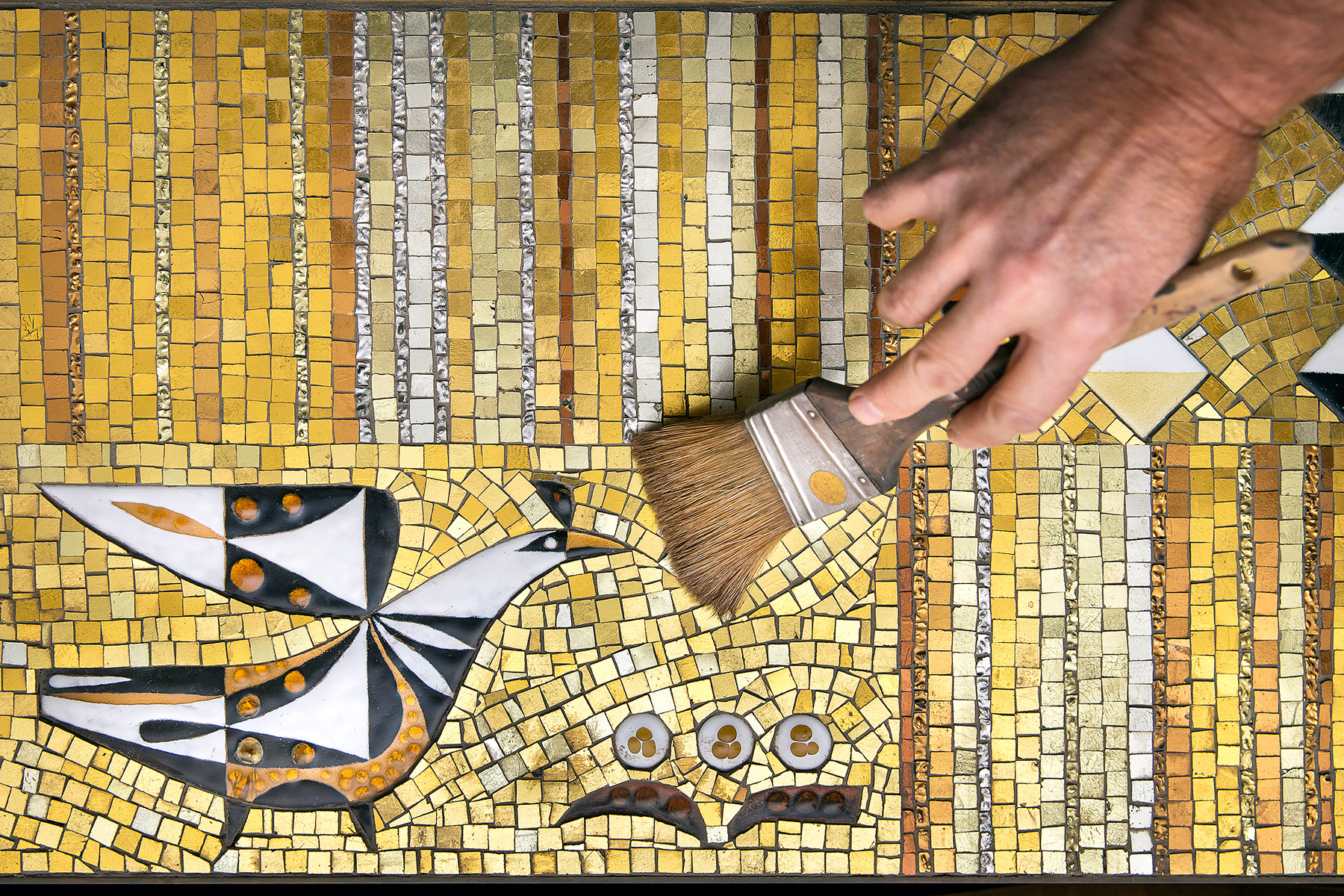 HEADY METAL: Van Enter credits growing up under apartheid with his ability to fix everything from mosaics to José de Rivera's "A Wishing Star." "You had to get resourceful," he says.
I meet van Enter in his workshop and apartment in a converted warehouse in East Dallas. A stocky, balding man in his mid-50s with a triang-ulated Vandyke beard, van Enter is friendly and eager but admits that a quick temper comes in handy in a line of work that demands exacting precision from his employees. In the corner sits the real secret to van Enter’s success—an MV Agusta motorcycle. Though he comes from a family of artists, van Enter’s restoration work has been aided by the fact that they were also all avid motorcycle racers.

“Milling, machining, and welding exotic materials I know from having motorcycles,” he says. “A motorcycle is made of 12 different metals. You can’t just specialize in stainless steel welding. You have to be a bit of a master in everything.”

Another unconventional contribution to his education: growing up in South Africa during the apartheid sanctions. “You couldn’t just go to the shop and get a spare part for a car,” he says. “You had to get resourceful. You had to learn how to weld and fix things.”

To fix A Wishing Star, he will have to cut it open, re-weld it, and re-polish the aluminum, a metal he doesn’t particularly enjoy. “Great for motorcycle engines but rubbish for sculpture,” he says.

Van Enter reaches out and touches the sculpture, examining a spot of corrosion with his forefinger.

“But it will look like new when it is done.”