One morning last December, Dr. Christopher Crow leaned forward in a plush chair and jammed a finger down at the crowd seated below him. Crow was onstage in a room at Union Station for a Dallas Regional Chamber of Commerce healthcare meeting, and he had the ears of representatives from banks as large as Comerica ($69.2 billion in assets) and Frost ($28.6 billion), consulting shops like Accenture (more than 370,000 employees and clients in 120 countries), and law firms like Jackson Walker (350 attorneys in six cities). “The act of understanding how healthcare costs work in America, and certainly in Dallas-Fort Worth, our level is an F. And that’s you,” he said, gazing at the 200 or so businesspeople in front of him. “I’m going to give you an F, I’m going to give our doctors mostly an F, I’m going to give our staffs an F.”

They’d gathered that morning for a panel on how healthcare organizations in North Texas are helping dial back medical spending. Baylor Scott & White’s chief quality officer told a story about how the state’s largest nonprofit hospital system has whacked away at medically unnecessary imaging services. Dr. David Hayes was in town from the Mayo Clinic’s Minnesota headquarters to talk about partnering with the Methodist Health System to share best practices and identify cost savings.

But Crow was the only person onstage who put the onus back on the people watching him. Wearing a tailored navy suit with no tie, he casually hung his right leg over his left knee and kindly implicated everyone.

“Has anyone seen the ridiculous proliferation of 24-hour, on-the-corner ERs? Why? You ask the question: Why is that happening? It’s because they’re making a hell of a lot of money. Now how do we connect that to us? Have anybody’s rates gone up over the last couple years?” The crowd sighed affirmatively. “That’s one example. I’m going to give you 10.”

After the panel ended, the Plano-based physician and entrepreneur had a line of about 20 people waiting to speak to him.

For the past decade, Crow and a cohort of fiercely independent men and women have been quietly building a healthcare ecosystem in Collin County and North Texas for like-minded doctors in private practice. Their ultimate goals haven’t changed—“helping communities thrive” by improving value and access to care—but the scale certainly has. What started as a midsize independent practice has grown into three brick-and-mortar locations, a physician services company, and a network of more than 300 primary care providers.

Nine years later, there are about 40 providers at the three medical villages in Plano and McKinney.

Around 2005, Crow and six other primary care doctors began planning the formation of a physician group known as Village Health Partners. Two years later, they began seeing patients in Plano in what they coined a “medical village.” During his medical residency, Crow says he noticed inefficiencies and waste in the way patients received healthcare. It was rarely easy to access and often placed an undue burden on the patient, especially those with chronic conditions that were managed by a melange of prescriptions and specialist appointments.

The medical village housed those services in one place. Need a cardiologist? Head up to the second floor. Need to fill a prescription? The pharmacy is on your way out, to the left of the glass double doors. Village Health was an early adopter of what’s known as a patient-centered medical home, a coordinated model of care that allows every caregiver in the building to collectively focus on the patients. In 2008, there were just 214 certified doctors practicing in 28 care sites across the country. By 2014, there were more than 44,000 physicians and 8,828 locations. Village Health was the first organization in the Southwest to achieve the highest possible accreditation from the National Committee on Quality Assurance for medical home certification.

The industry jargon for these sorts of strategies is “value-based” care. Through nearly all of the history of American healthcare, however, the delivery strategy has been driven by volume. On its face, that makes sense. Doctors get paid for their time—money for every visit, for every procedure, for every patient who walks through their door. But this fueled a major run on services. Because everyone still got paid, there wasn’t much of an economic incentive to address it.

Healthcare now accounts for nearly 18 percent of the country’s gross domestic product. Medical bills fling more Americans into bankruptcy than any other cause. The cost of common procedures varies so strikingly across the nation that a patient in Dallas could pay $46,000 to get their knee replaced despite the national average being near $33,000. (That’s according to Guroo.com, a database that identifies prices based on 40 million patient records offered by the country’s largest insurance plans.)

The Affordable Care Act, enacted in 2010, aims to curb the volume-based payment models and modernize the delivery of care. It mandates that patient records be managed electronically. It dings providers for readmissions and rewards them for favorable outcomes. And it has fueled an unprecedented rush of consolidation. Independent providers now have an increased administrative burden that goes far beyond hiring an office manager. Practices now must analyze data and have the infrastructure to transition thousands of paper records to electronic. IT used to be a near-zero line item on their budgets. Now it can be up to 10 percent of their revenue.

And the large health systems are circling overhead like hawks. They’re buying independent physician practices that have all but collapsed in the post-Obamacare environment. The costs of providing healthcare are now so high that employers and insurance plans are demanding that the providers show their value. 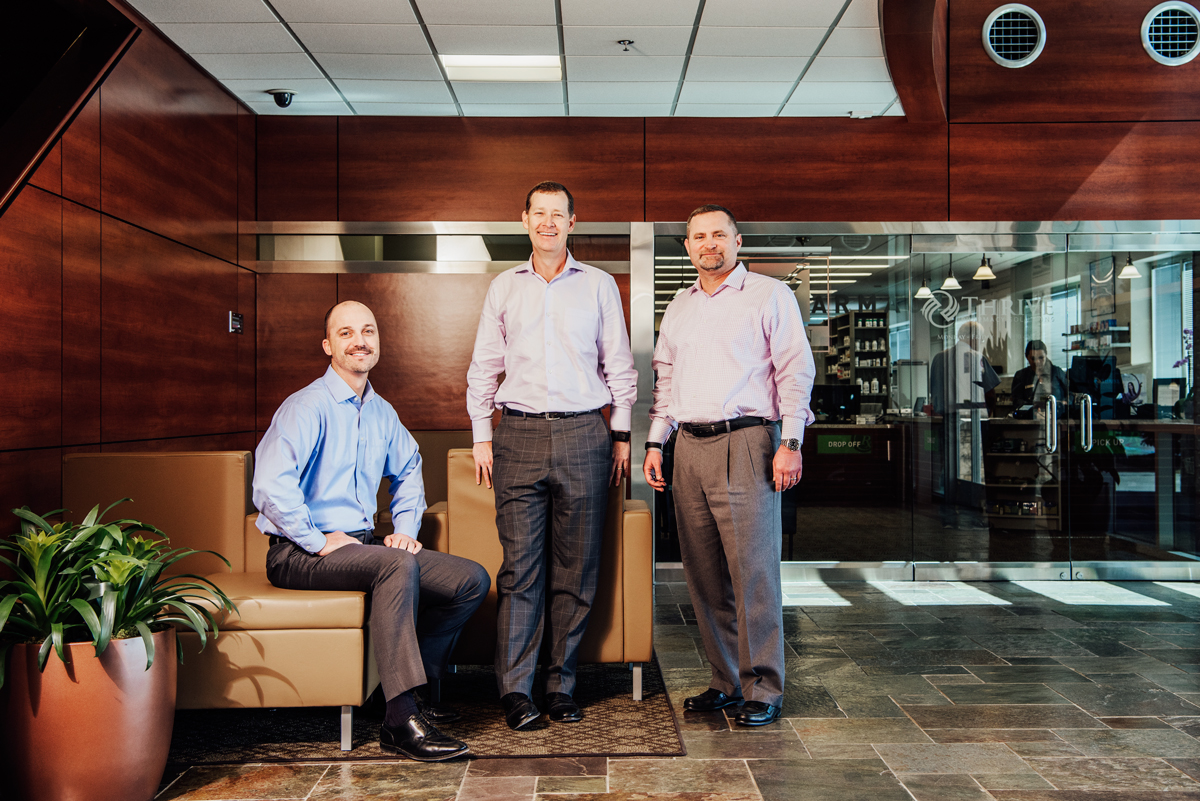 He and his partners didn’t know it in 2007, but they were building a model so independent physicians could punch their way out. Village Health started with seven family doctors who wanted to treat patients in a coordinated way. They attracted various specialists to the medical village in Plano, doctors who saw the potential in having what essentially amounted to an in-house patient referral base. Nine years later, there are about 40 providers at the three medical villages in Plano and McKinney, if you toss in the on-site nutritionists, dietitians, and counselors.

“The things we are able to do—the cost savings and having the best outcomes—were noticeable with all the payer sources,” says Dr. Jamison Albracht, the president of Village Health Partners and one of its co-founders. “They were wanting us to grow.”

The data that Village retained proved its value. Large employers and insurers—Crow declined to name exactly whom—began asking them to consider spreading south into Dallas, maybe out west toward the Mid Cities. But merging practices is a difficult slog. There are cultural hurdles and high capital demands. Replicating the model across Dallas and Fort Worth wasn’t feasible, Crow says. But it got him thinking.

In the early 2000s, before Village, Crow enrolled in an executive MBA program at the University of Texas at Dallas. It opened his eyes to the operations side of his practice. He began looking at the data, and it gave him new insight on where to improve. When the large employers began calling, he realized that the majority of independent physicians in the market aren’t looking at their data in this way. Crow and his team decided to see how far they could stretch their tentacles without setting up a chain of brick-and-mortar medical villages.

“Just like most every other business in this country, you’ve got to show that you have value,” Crow says. “It’s hard for a four-man group to prove its value.”

Research has shown, though, that independent physicians can be more productive than their employed peers. A 2014 study in the highly regarded Journal of the American Medical Association found that doctors in California spent 10.3 percent more per patient when they were employed by a hospital system compared to their independent counterparts. To maintain its autonomy, Village Health Partners had been contracting since 2007 with a physician services company, then called StratiFi Partners, which provided the group with financial services and high-level consulting similar to what a chief financial officer would provide.

In 2012, Crow approached StratiFi Partners about merging. It made sense. Village Health Partners and StratiFi offered complementary services that could help independent physicians withstand the hurricane of consolidation and get help with administrative tasks like IT and payroll. They merged in 2013, creating StratiFi Health. StratiFi’s clients are now located in 18 cities in North Texas; their cumulative operating revenue is nearly $250 million, and they have a total patient population of 167,239.

“Those market influences were creating all these dynamics where physicians were running scared—primary care and specialists alike,” Crow says.

In January of last year, Crow and his team took on another venture, launching the Catalyst Health Network. Targeted at independent primary care providers—much like those who started Village Health Partners—the network groups the providers in a coordinated model of care and secures value-based contracts with insurance companies that reimburse for outcomes. It is the broadest strategy yet that Crow and his team have developed to help small groups show their value. What makes Catalyst stand out is that it does not mandate how physicians reach their goals, adhering to the independent philosophy that drives its members. So far, 300 primary care physicians have enrolled, amounting to about 170,000 patient lives attributed by insurance companies.

“I don’t know if it’s the answer,” says Jeff Lawrence, executive director of Catalyst, “but I’m pretty sure it’s an answer.”

One afternoon in February, about a dozen Catalyst employees sat around a long table discussing a few of these patient lives. Crow likes hearing stories about how the patients are impacted by the system. Today, he hears of a Type 1 diabetic who showed up in the emergency room of a Texas Health Resources hospital. He wasn’t following his treatment regimen. Because Catalyst is wired with the hospital, it was notified that the patient had sought emergency care and been discharged with instructions to follow up with a primary care doctor. A coordinator called the next day. The patient blew her off, but something in her voice caught his attention. He called back and asked her to set up a doctor’s appointment. He was re-engaged.

“Every other way that patient would’ve slipped through the cracks,” Crow says.

It’s not complicated. But the fact remains that about 5 percent of the population accounts for more than half of all healthcare spending. By managing patients in a network like Catalyst and giving appropriate care in the appropriate settings, they can cut down on unnecessary readmissions and catch illnesses before they become so severe that they require a trip to the ER. And when employers can spend less on healthcare, it frees up money to pay for other things. That’s what Crow is eyeing.

“I was talking about this with one of the members of the Plano school board, who told me, ‘Wow, we haven’t been able to do much in after-school programs or student-teacher ratios in a while. If healthcare spending is our No. 2 line item behind people, if we were able to change that much, even just a teeny bit, that spins off lots of dollars to do other things,’ ” Crow says. “What would that do to their education system? That’s helping communities thrive. Boom.”