Never take a DART train to the State Fair. Don’t even consider it. You’ll think it’s quicker (or at least more convenient) and less expensive than parking, but it’s neither. It’ll ruin you on the entire experience, which we swear is pretty good. If nothing else, at least promise you won’t ever attempt to take DART to the Fair during Texas-OU weekend. Promise.

Avoid gridlocked southbound commuter traffic on Central Expressway and Dallas North Tollway by taking Preston Road all the way. If you’re trying to go from East Dallas to Oak Cliff without using the frequently congested I-30, take Columbia Avenue, which turns into Main Street, then Canton Street, then Young Street, then Wood Street, before it deposits you at South Houston Street and the North Zang Boulevard bridge. Running late for a flight at DFW? Hit Northwest Highway and head west until it ends.

Which Road is Which?

Most people in Dallas call the various highways by their names—Central (U.S. Highway 75), LBJ (I-635), Stemmons (I-35E through Dallas), Woodall Rodgers (Spur 366, the road that passes under Klyde Warren Park near downtown), and so on. Some people call them by their numbers. But no one ever uses “the” before the number. You would never say, “I’m going to take the 635 to Midtown.” Since we’re here: Central is named after an old train line, LBJ is named for the president, Stemmons is named for developer John Stemmons, Woodall Rodgers is named after a mayor, and the Dallas North Tollway is named after itself. 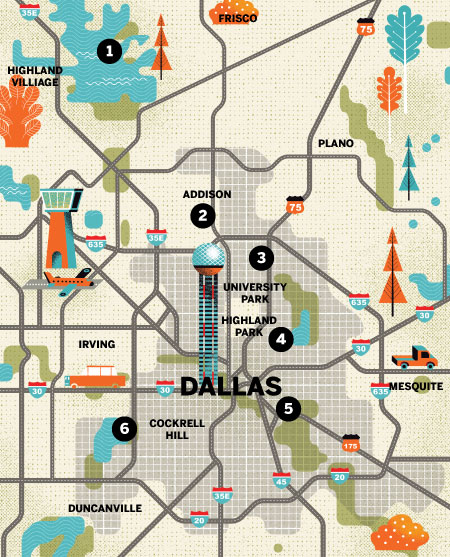 Lewisville Lake is the site of a troublesome dam where repairs were recently begun on a 161-foot landslide. Also, plans are afoot to start fracking under the lake. Also also, it is the home of the infamous Party Cove.

When traffic is light on the Dallas North Tollway (not the North Dallas Tollway), don’t be surprised if a Lamborghini or McLaren blows by you at 120 mph. It is Dallas’ richest, fastest road.

You can take the President George Bush Turnpike to U.S. Highway 75, which becomes the George W. Bush Expressway near SMU, and then exit onto SMU Boulevard and drive two blocks to Bush Avenue.

There are three municipalities that are surrounded by the city of Dallas. North of downtown, you’ll find the wealthy enclaves of University Park and Highland Park. You’ll see fewer Jaguars in Cockrell Hill.