The image of the horse with the small white splotch on its brow comes from the Y-6 Ranch in Valentine, Texas. The ranch—as photographer Laura Wilson explains in her new book, That Day: Pictures in the American West—is about as far from the world as you can get without dropping right off the face of it. In another image from Valentine, ranch hands sit atop their horses, framed by a landscape that feels as desolate and alien as the hazy red mountains photographed by the Mars rover. 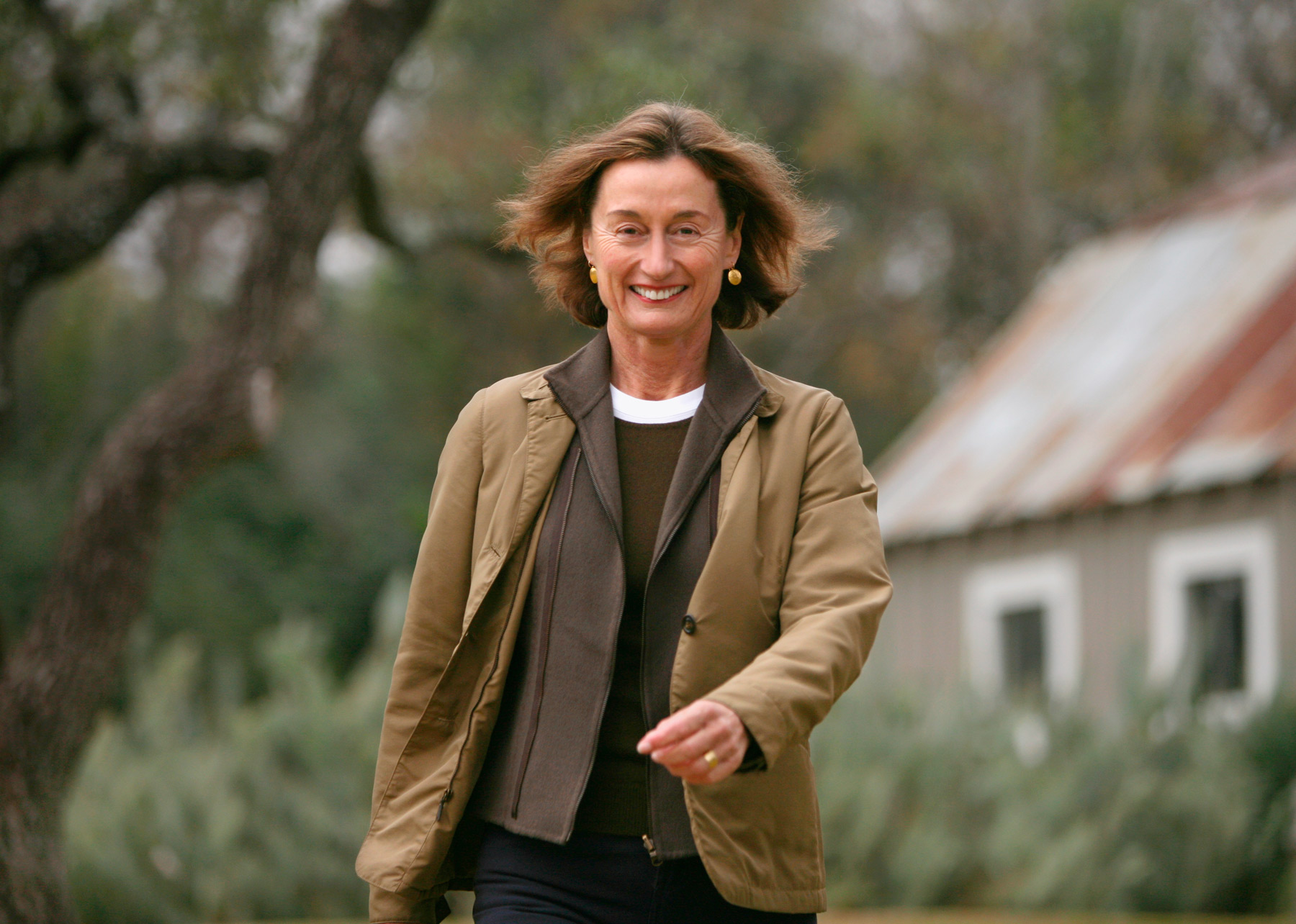 What is it that attracts our attention to these images and so many others that fill Wilson’s book and career-spanning survey exhibition that opens this month at the Amon Carter Museum of American Art? The Dallas photographer—and mother to actors Andrew, Owen, and Luke—has spent much of her career trying to answer that question by staying in pursuit of these kinds of spaces and the people who populate them.

It was a journey that began in 1979, when she first worked with legendary photographer Richard Avedon on his own series about the West. The fashion photographer’s unique approach had Wilson scurrying around tiny towns, scouting for faces that Avedon would then capture in isolation, framed against a white backdrop, emphasizing all their rugged, gothic expressiveness. Wilson’s own project retains some of this grit but expands the focus. In her photos there is a stark realism that plays in tension with the way these subjects and settings resonate with the myth of the West.

The idea for the retrospective exhibition began not in isolation but at a cocktail party in Wilson’s home on Strait Lane in October 2011. That’s where Andrew Graybill, the new co-director of the William P. Clements Center for Southwest Studies at SMU, saw one of Wilson’s images framed in her dining room. Seeing the image in that setting, Graybill notes in his foreword to That Day, showed “a West that is unfamiliar and riddled with paradoxes.”

Dallas’ own relationship to the West is one of paradox. A frontier town shaped during westward expansion, it is a Southwestern city whose civic ambition and desire for cultural sophistication found it often looking eastward for inspiration. It is not surprising, then, that it is through Wilson—a native New Englander who has lived much of her life in Dallas—that the West takes a form that feels both familiar and foreign, exploiting photography’s power to convey a sense of intimacy with subjects we might otherwise avoid or not notice.

In the following pages, we have reproduced a selection of photographs from That Day: Pictures in the American West, accompanied by Wilson’s own words, in celebration of her career. From the realities of immigration and the fervency of evangelical Christianity to the enduring appeal of the man who first drew Wilson to the mysterious West, her images reveal a contemporary landscape that, though seemingly remote, participates in the shaping of our own. —Peter Simek 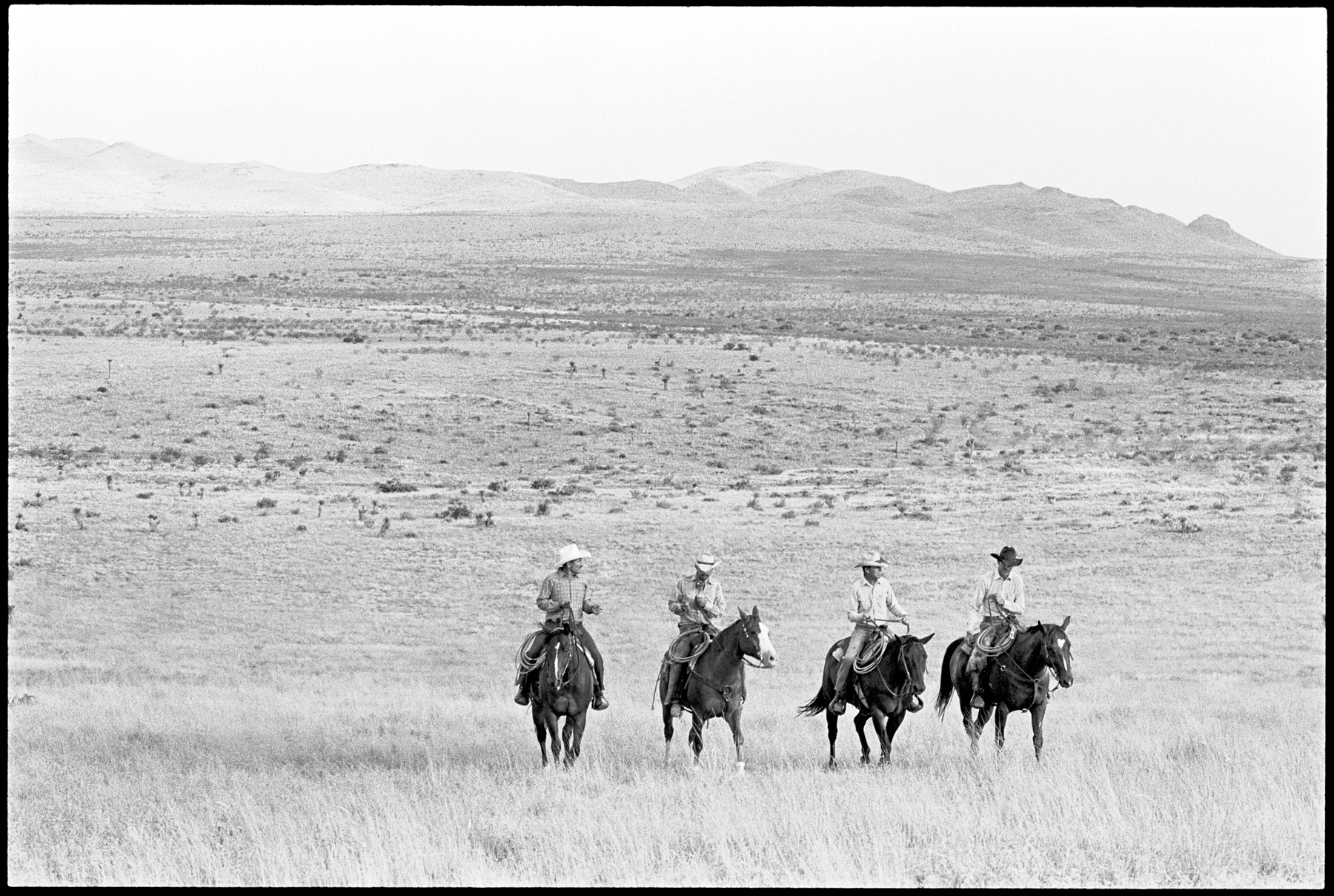 It is as much Mexico as it is Texas. it’s the wonderful country of Tom Lea, the “cruelly civilized” land of Cormac McCarthy. It’s arid desert, and it’s not going to change anytime soon. In other parts of Texas, ranchers say that oil and a pump jack make a fine cross with a Hereford. But here in Jeff Davis County, where there is no oil, ranching is a hard way to make a living. The margin of profit on cattle is so slim that the Means family can barely hold on to land that they’ve worked for three generations to put together. Yet the land has a grip on them. They come from men and women who felt that land was the only measure of wealth. Alf Means’ great-uncle was the famous Texas Ranger James B. Gillett. Born in 1856, 11 years after Texas was granted statehood, Gillett wrote late in his life, “Oh, how I wish I had the power to describe that wonderful country as I saw it then.”

I photographed the Means men apart from the women, the father and son each with a vaquero, or cowboy. The men spoke Spanish mixed with English among themselves. They were out on the land all day, working cattle, providing supplementary feed, tending water pumps—whatever it took to squeeze some value out of 60,000 acres.

I photographed the women with their husbands, but the stronger portrait seemed to me to be the one of the women and girls together, separate from the men. On the Y-6, the women led more traditional lives within a domestic setting. They tended to their families and kept their households running, and on the Y-6 that’s a big job—it is, after all, a 120-mile round trip to the closest grocery store in Alpine. To ward off the isolation in their lives, there was a necessary closeness among the generations. —Laura Wilson 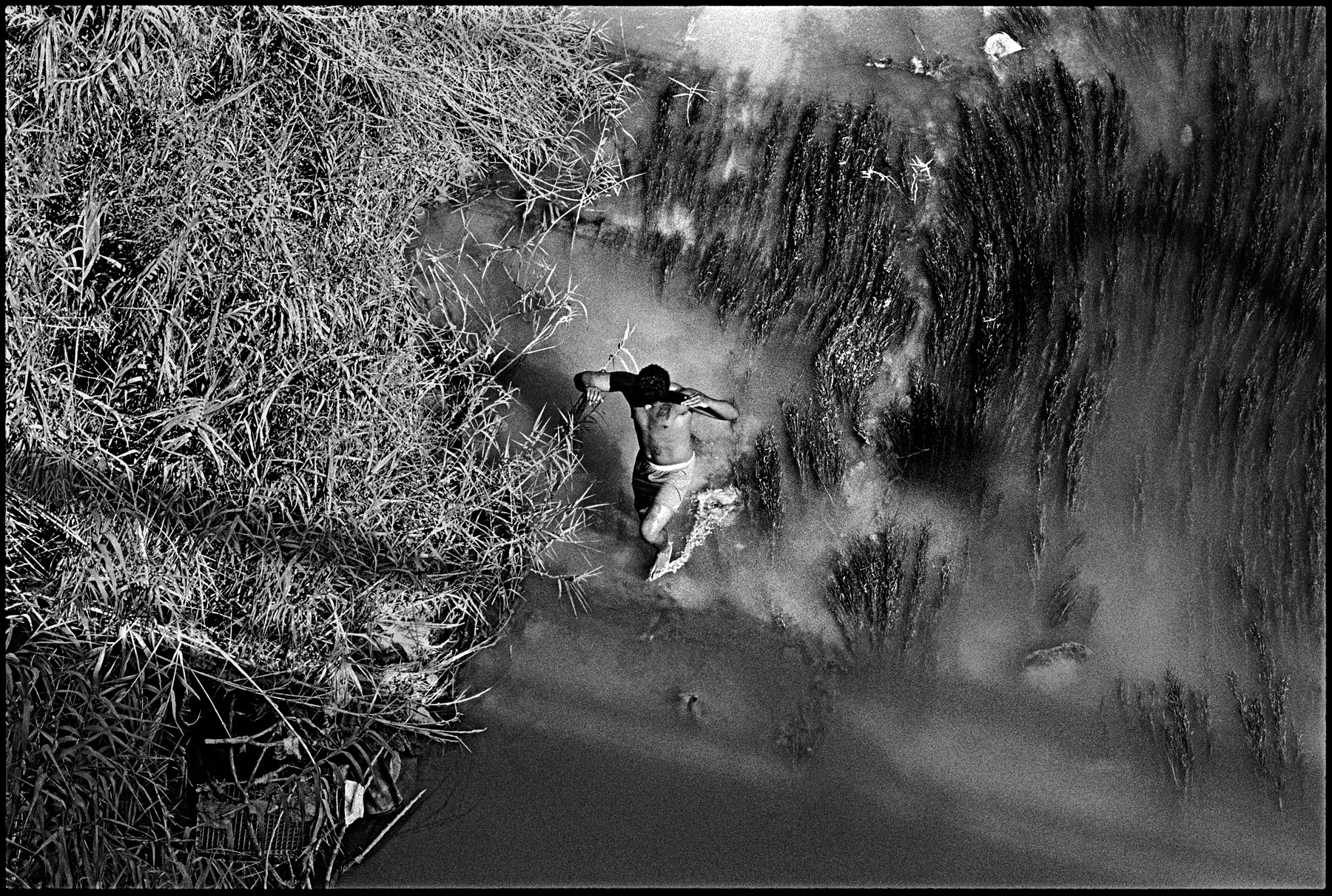 I followed Texas Ranger Doyle Holdridge up a bluff overlooking the Rio Grande in Webb County. From that vantage point, Holdridge used binoculars to scan the river and the thorny brush on its banks looking for undocumented immigrants and drug smugglers. The Rangers and Border Patrol have worked for decades to halt the influx of illegal traffic, but it’s not easy. The rugged border, 1,954 miles from Brownsville and Matamoros on the Gulf of Mexico to San Diego and Tijuana on the Pacific Ocean, is the most heavily crossed border on earth. It has proved impossible to seal. From season to season, climatic conditions change, and the number of migrants and the smugglers’ routes varies accordingly. Even the looping bends in the Rio Grande rearrange themselves in certain areas, making the border fluid. The U.S.-Mexico boundary has always been porous. In spite of billions of dollars allocated for manpower, fences, drones, cameras, and helicopters, lawmen like Holdridge know that the border will remain forever permeable. The Border Patrol uses trained dogs to root out drugs in vehicles passing through security checkpoints, and to find people hidden under tarps on trucks in the dark of night. Yet attempts to cross the border are unending, even though only a lucky few are successful. On the same day that I watched a man swim across the river from Nuevo Léon to run into dense brush on the Texas side, I saw another man floating facedown, dead in the Rio Grande.

I’ve been paying attention to border issues for a quarter of a century now. I’ve seen Mexico’s various attempts to build some kind of democracy fail, and I’ve despaired at the continuing rise of corruption in the government, enabling narcotics to become that country’s primary export. Corruption, collusion, and poverty have combined to make the country incurably unstable and the border with the United States una herida abierta, “an open wound.”

The writer Gloria Anzaldúa speaks of the border as a place “where the Third World grates against the first and bleeds. And before a scab forms it hemorrhages again, the lifeblood of the two worlds merging to form a third country—a border culture… . The prohibited and the forbidden are its inhabitants.” —L.W. 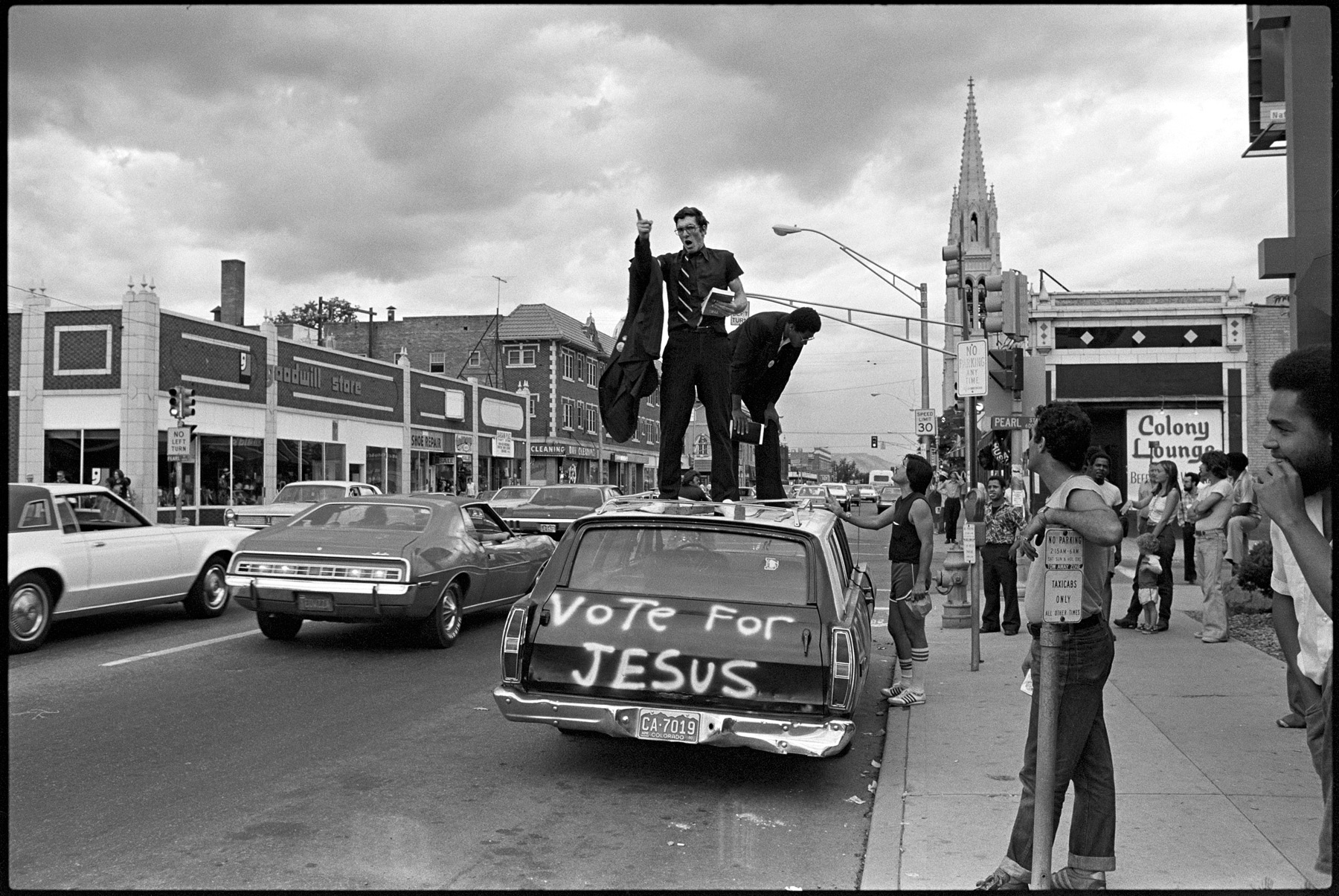 Photo from Laura Wilson's 'In the American West'
The Glory Riders made a striking appearance, riding briskly in formation on white horses with white crosses on their saddles and costumes. Joy West, the group’s leader, was adamant in her explanation of its mission: “We are not a riding club. We’re a ministry. We’ve teamed up with the Lord Jesus Christ to go where He sends us so we can share His love with all.” The group had been riding for glory in parades and rodeos since 1989. I first met West when she and her Glory Riders took part in a big, impressive parade celebrating the opening of the National Cowgirl Museum and Hall of Fame in Fort Worth. I then followed the group to Nocona for another parade, and caught up with them again in Fort Worth a year later.

The popularity of the Glory Riders seemed to me to be a reflection of the growth of evangelical and Pentecostal groups. Over 15 years, on frequent drives on the highways and byways of the West, I watched the expansion of the fundamentalist Christian frontier. The number of small places of worship seemed to triple. They often lacked steeples and stained-glass windows, but they always had a cross. —L.W. 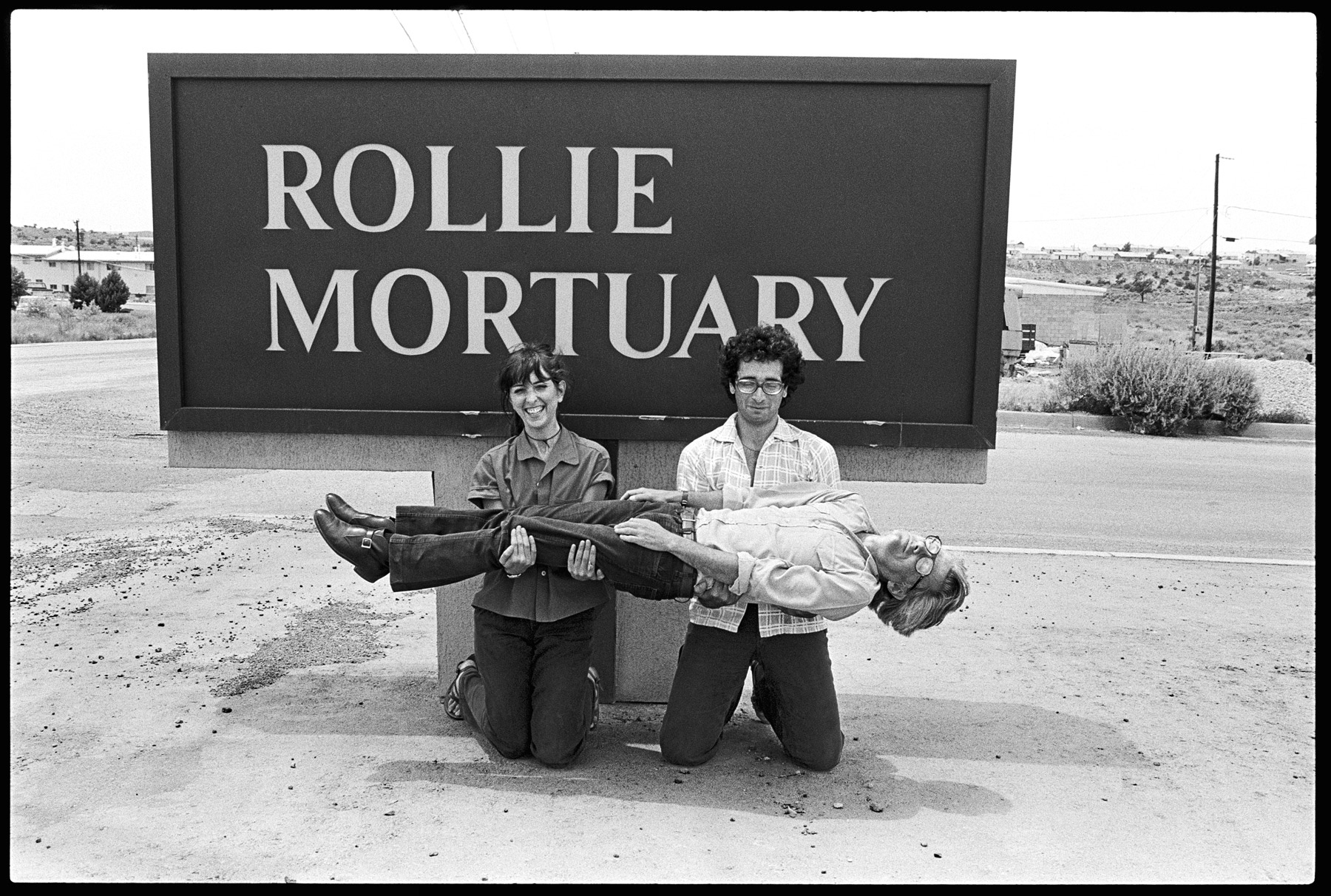 The photographer Richard Avedon came from New York City to the West in 1979, and hired me to assist him on a project that would become the most significant series of portraits in his long career. One June day, Avedon abruptly stopped the car in Gallup, New Mexico, and jumped out. He wanted to have his picture taken beneath a large sign that had caught his eye announcing the Rollie Mortuary. For 30 years, his camera of choice had been a Rolleiflex, commonly known as a “Rollei.” “This is where I want to be buried,” he said. His camera assistants held him stretched out prone beneath the sign.

In 2004, when Avedon was 81 years old, he asked me to help him once again, this time with a project for The New Yorker. He wanted to return to the West to round out a series of portraits he called Democracy. We spent two days at Fort Hood in Killeen, Texas, and then went on to San Antonio to Brooke Army Medical Center, the U.S. military’s leading burn-treatment facility.

That night, Avedon and I made plans to meet the next morning to review his layout of the story, but when I went to his room early that following day, I found him unsteady and confused. He said sadly, “I couldn’t sleep. I kept seeing the burnt faces of the soldiers, even those bandaged faces I could not see.”

Moments later, he lost consciousness. He had suffered a stroke. He was rushed to Methodist Hospital in San Antonio but died of a cerebral hemorrhage there five days later. Avedon’s life as a photographer was far-ranging and obsessive. Right through to his last portraits for The New Yorker, he never stopped working. And he got his wish to die in the West, although not under the Rollie Mortuary sign. —L.W.