It is no surprise that the Dallas hot spot for jay-walking citations is the intersection of Pacific Avenue and North Lamar Street, in downtown. It is probably Dallas’ most-walked space. Thousands of commuters pass through here every week as they transfer between buses at the West Transfer Center and trains at the DART’s West End Station. And yet you’d be hard pressed to find a place that is more irrationally designed and difficult to navigate. There are no crosswalks that directly connect the DART station and the bus station. Street paint is faded. Streetlights are confusing and poorly timed. As a result, most people jaywalk. Not only is jaywalking the most intuitive way to cross the street at this intersection, sometimes it is the safest.

Jaywalking laws don’t exist in places like the United Kingdom and Scandinavia, and they have been around in the United States only since the arrival of the automobile. Take a look at any old photo of any city in the United States taken around the turn of the century, and you will see what looks to the naked eye like a chaotic mix of pedestrians, horses, carriages, hand-pulled trucks, and streetcars. Largely at the insistence of automotive companies and the American Automobile Association, states and cities began cracking down on this kind of streetscape as part of a systematic effort to turn over streets to cars. The result is a policy that favors automobiles over people.

In recent years, however, urban planners have argued that jaywalking laws seem to be an ineffective means of keeping pedestrians safe. For one, forcing pedestrians to cross at intersections makes it difficult to spot turning cars, and difficult for drivers making turns to spot pedestrians. Others argue that jaywalking is an organic form of traffic calming. When drivers are anticipating pedestrians and not blindly following automated traffic signals, they take more personal responsibility for how safely they drive. Finally, those photographs of the chaotic streets? They actually represent the kind of vibrant urban street life so many people want to live near these days, the type of streets that are a boon to economic development.

The way the city of Dallas enforces jaywalking citations also suggests that these laws aren’t even used as a means to protect citizens but are perhaps a convenient tool to pursue ulterior agendas. In 2013, the city of Dallas issued 801 citations, more than all the other years between 2010 and 2015 combined, as part of a jaywalking crackdown. At the time, media reports suggested that one of the motives was nearby businesses complaining about the people populating the crowded space around the West End train and bus stations. Further analysis of the data shows that a disproportionate percentage of all jaywalking citations issued in the city of Dallas are issued to African-American males. This data is all the more troubling when you consider that jaywalking laws have been cited as a tool in the so-called “broken windows” policing policy that addresses perceived “disorder” as a means of combating crime.

So is it time to repeal our jaywalking laws? That may be going too far. But if the laws’ purpose is to make streets safer, then at the very least, the history of their enforcement suggests that they are not very effective at doing that job. The futility of jaywalking ordinances is just one indication that it is time for Dallas, along with all American cities, to rethink how it designs and manages street life.

WHERE JAYWALKING CITATIONS ARE ISSUED…

A map of four and a half years’ worth of jaywalking citations, found in the Dallas Police Department’s records, offers a glimpse of where some of the more well-walked areas of Dallas are—with some glaring exceptions. While it makes sense to prohibit crossing at major highways, most citations were issued in predominantly lower-income areas of Dallas, while upscale or better-designed walkable zones, like Bishop Arts and Uptown, appear to be safe for jaywalkers. 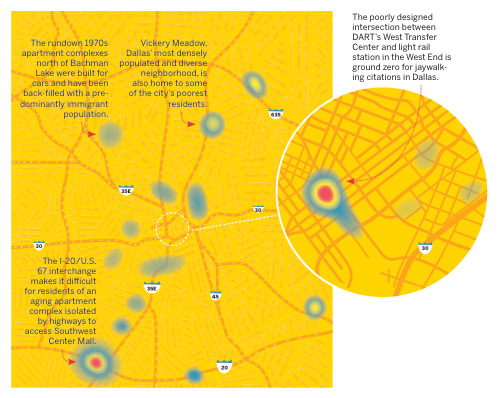 … And WHO GETS THEM

Citations spiked when the Dallas Police Department decided to enforce jaywalking. In 2013, police issued two and a half times more citations than in 2010, 2011, 2012, and 2014 combined. Furthermore, when you break down enforcement by race and gender, the statistics are not reflective of the Dallas population. The suggestion is that jaywalking laws are a means to enforce a “broken windows” crime policy that disproportionately affects African-American males.