The first time I cruised by The Grove at Harwood, the lot was full, and the side streets were crammed with cars. The white-and-blue wooden picnic tables were packed, and men in cutoffs and barefoot women dominated the volleyball courts.

The following Saturday evening, I checked back at the Grove, fully prepared to fight through crowds of outdoor-loving Dallas yuppies. Instead I found only a handful of cars in the parking lot. I passed the empty volleyball courts and made my way to the bar.

“Everyone is busy watching the UFC fight,” Rachel, the pretty brunette bartender, told me. “If I wasn’t working, I’d be watching it, too.” 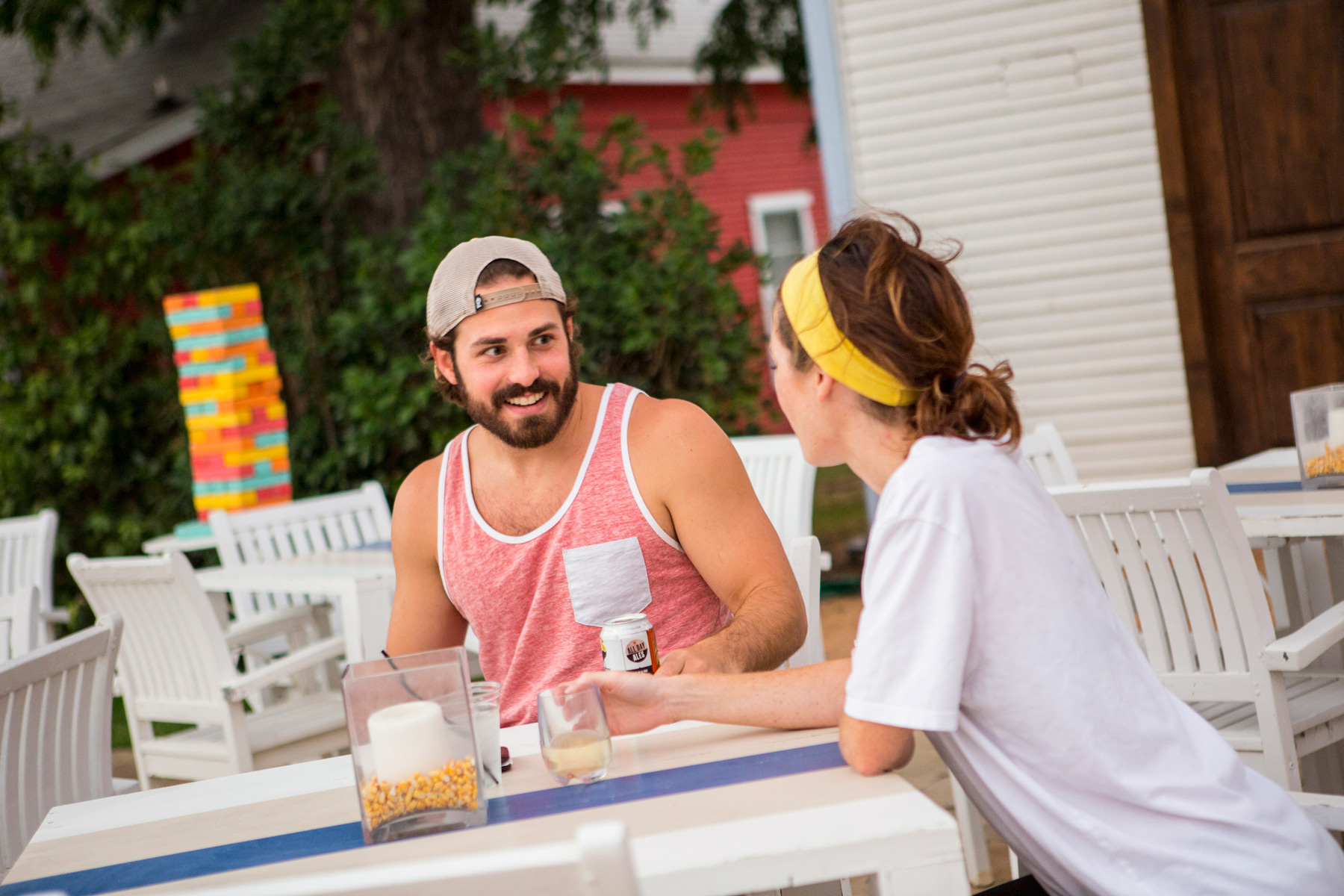 BE HERE NOW: Some might say the Grove, with its laid-back vibe and plentiful foliage, is an oasis amid all the steel and concrete of Dallas. Photography by Jeremy Sharp
Photography by Jeremy Sharp
I had noticed by now that the Grove is entirely outdoors. The “bar” is actually just a classy concession stand. I figured the 90-degree temperatures probably weren’t helping to bring in the crowds, since it’s not easy to enjoy a drink while you’re drowning in your own sweat.

Grumpy to be outside in the eyeball-scorching summer heat, I studied the menu. There’s an assortment of healthy appetizers and panini sandwiches. The alcohol options include beer, wine, and margaritas. I perked up when I noticed an additional menu taped to the bar: snow cones. Specifically, alcoholic ones. Vodka flavors included cherry, bubblegum, grape, root beer, and mango. There was even a surprisingly delicious bourbon-and-Coke option for my companion.

We grabbed a picnic table near the cornhole game and crunched down on our alcoholic ice. Straight ahead was a bocce ball court and two hammocks slung between tall trees. The faint glow of downtown was partially visible through the foliage. A canopy of fairy lights glowed overhead, and large oscillating fans dispensed a misty breeze so strong that I didn’t even feel warm. The wall of the building was covered in mounted pots filled with purple plants, and between the cute centerpieces and hand-drawn wooden signs, it felt a little like going to a Pinterest-inspired party in your richest friend’s backyard.

Meanwhile, two couples began a heated cornhole match—though their beanbags mostly missed the boards entirely. A pair of pretty young women previously sharing a hammock abandoned it to grab margaritas. I decided to investigate the alcohol content of my snow cone. It may have been the cool breeze, or the laid-back vibe, but I was feeling a little too good.

Bartender Rachel told me that each snow cone contains about a shot of liquor. While I considered my next flavor, she explained that on non-UFC fight nights, the place is usually quite packed. I asked when the Grove opened.

Obviously, you can’t go to a place that sells alcoholic snow cones and not indulge. Try the Drunken Smurf, a sweet and refreshing mix of blue raspberry flavoring and berry vodka. A word of caution, though: you may not notice that your lips are blue until you get home.

“Around the end of May,” she said, shrugging. “But it was raining a lot then, so —” Ah, yes, that time when torrential downpours transformed our fair city into a muddy, unforgiving jungle.

“I have a vitamin D deficiency,” an older, well-dressed lady at the bar interjected. She was sipping Bud Light from a can and tapping away on a MacBook. “I moved down from Ohio around that time. I came here to see the sun, but all I got was rain.”

“I’m not an indoor person, so I’m fine as long as I’m outside,” she said. “I’m glad I found this place. It’s an oasis in all the steel and concrete.”

The lady went on to suggest that the Grove host a masquerade party for dogs, but her oasis-amid-the-city observation seemed rather insightful. Whether full of sporty young people or sprinkled with just a few Saturday night drinkers, the Grove just might be the green escape that Dallas needs.