Albert Black, the 56-year-old former chairman of the Baylor Health Care System, leaps from his chair to do a squat thrust. His eyes are closed, but he smiles as he pushes all 6 feet, 2 inches of himself to his full height. His back remains ramrod straight. He then eases into his chair and whips his leg over his knee, hiking up his suit pants just enough to show that his initials are stitched into his cowboy boots.

Don’t underestimate the significance of this movement. About a decade ago, the bulging discs and damaged vertebrae in his back made walking a nearly impossible chore. He could stretch out fully only while lying down or floating in a swimming pool. His palliative care morphed into an opioid dependency. His condition, compounded by inflammation in his brain stem, caused memory loss and blackouts—so much so that he says he doesn’t remember portions of his life.

The pain was a cruel remnant from an adolescence and college career spent on football fields. He began noticing it in 2002, when his Oak Cliff company, On-Target Supplies & Logistics, began a 24-month trudge of no profits following an economic downturn. That pain followed him onstage as the first black chairman of the Dallas Regional Chamber. It was there as his kids grew older. And that pain made him withdraw.

“I was not doing a lot with my daughter, who was the last of three children, that I did with my sons,” he says. “They knew me pre-excruciating pain. She doesn’t. Until now.”

Black is a southern Dallas success story. He grew up about a mile southeast of Fair Park, in the Frazier Courts housing project, a complex of about 500 brick units built in the ’40s and ’50s, modeled after military barracks. They all came down in 2005, replaced with grant-funded single-family townhomes. Black’s father was a downtown Dallas hotel doorman who instilled a deep motivation in his boy to aim high. Chores didn’t earn him an allowance, but reading the Dallas Times Herald and the Dallas Morning News did. Today he’s intensely dedicated to southern Dallas, even locating the headquarters of his logistics company between tufts of elm trees off Clarendon Drive in Oak Cliff, just west of Interstate 35E. His company now employs 173 men and women who last year oversaw $36 million in logistics sales with companies such as AT&T, Oncor, and Texas Instruments. On-Target was successful enough to relocate anywhere in the city, but he chose to stay south of the Trinity so he could bring jobs there. 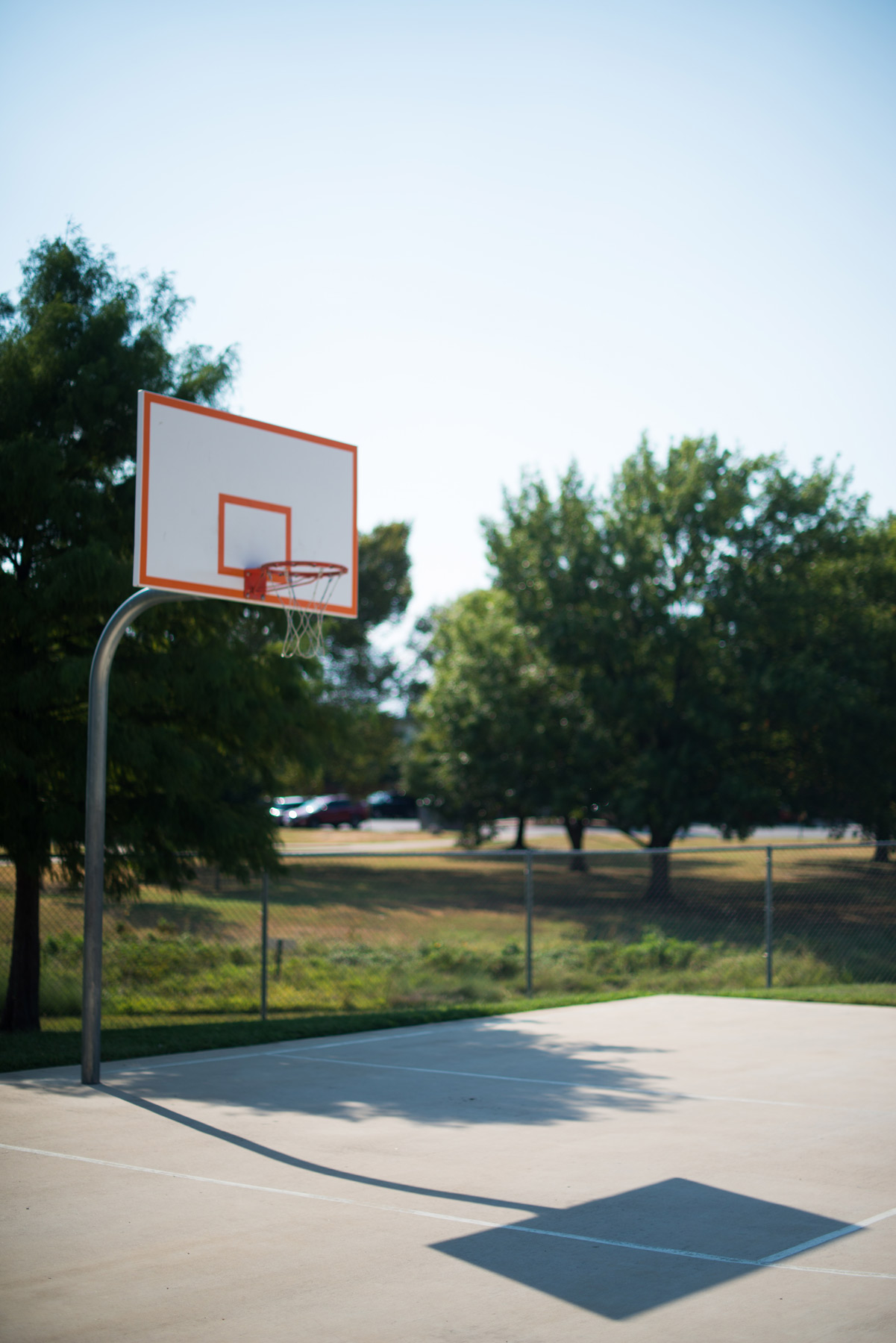 AND ONE: You’d expect to find a basketball court at the Juanita Craft Recreation Center in Frazier Courts. Because of Black’s prodding, in 2010 Baylor opened a dedicated diabetes wellness center there, too.
In 1971, 17 years after Brown v. Board of Education, a young Albert Black became one of the city’s first boys to board a desegregated bus. He headed to his seventh-grade classes 4 miles away, at John B. Hood Middle School, named after the Confederate general and bedecked with rebel regalia as its symbol and mascot.

“Sometimes God blesses you with a burden,” he says. “The burden God blessed me with was the understanding that it had to be better and that I had to be involved in it.”

Primary care services have a dismal history in southern Dallas. In the 1980s, Dr. Ron Anderson, Parkland’s longtime chief executive, went to work convincing the county to fund a series of clinics in underserved regions of the county. They’d provide preventive services to patients regardless of their income or insurance status. Parkland didn’t build near Fair Park or Frazier Courts. But a federally funded facility, the Martin Luther King, Jr. Family Clinic, did open in 1986, the first such effort to reach that community in decades.

“There were no healthcare agencies,” Black says. “We believed my doctor was Parkland Hospital, and we’re the first generation that could say that. Before that, ‘my doctor’ was a midwife. ‘My doctor’ was someone on the block that could take care of it.”

That sentiment followed him out of Frazier Courts, nestling up alongside the back pain that seemed inexorable for all those years. Southern Dallas remained a healthcare desert throughout the 2000s. A Dallas County survey in 2013 found that southeast Dallas had 54 primary care physicians per 100,000 residents. Southwest Dallas had 36. The national average is 226.

There is no grocery store, and jobs are scant. The median household income in 75210 is about $15,000. Black knew this data set well and saw healthcare as an engine for development. As Baylor’s chairman of the board, he pushed and pulled and prodded until he gained unanimous approval for a dedicated diabetes wellness center in South Dallas. In 2010, The Baylor Diabetes Health & Wellness Institute opened in the Juanita Craft Recreation Center in Frazier Courts. It would be the first specialty center in his home neighborhood, possibly ever. And Black believes it can bring about an economic renaissance.

“The idea that we’re going to build workforce housing and then industry would build itself, that was not it,” he says. “We needed to build an industry that is, by its nature, paid above the poverty line.” The 2014 national average healthcare salary was $76,010. The current poverty line for a four-person household is $24,250. “Now you’ve got people getting six figures working, and nowhere else in the ZIP code do you have that.”

The changes are evident in that neighborhood. Just look a mile south, where the Rev. Parish joined with the nonprofit Frazier Revitalization (which is led by former Trammell Crow CEO Don Williams) to buy up a tract of land that included a hot-sheet motel, an illegal nightclub, and a convenience store that was a front for drug sales. It took years, but the nonprofit mowed those down and eventually secured the capital to build a $19.8 million health center. It opened in May, and Parkland picked up the lease to operate it.

“For this area to be so prone to health problems and not have enough health practitioners, it really does create a problem,” Parish says. “It’s just a way of life for some people; they don’t go to the doctor until they have a health issue, and the health issue has to be severe, to where it’s disabling.”

Black hopes it goes beyond this. He wants to see the best practitioners staffing areas like Frazier Courts to provide the appropriate care. He points to his own story. Between 2002 and 2012, he had four major surgeries on his back and a dozen invasive procedures. He was on a slew of prescription painkillers. Then he hit a breaking point.

The oxycodone and inflammation make this memory a blank space, but his good friend Dr. Peter Dysert has filled him in. The story goes that Black walked into the Baylor chief pathologist’s office wearing a tracksuit instead of a pressed suit and tie, a rarity for the man who held the system’s highest-ranking board position at the time. He rambled on for hours about his severe pain as Dysert took notes. He fidgeted as he sweat in his chair and struggled to focus. Dysert recommended a woman named Dr. Carolyn Matthews, a gynecologic oncologist whose own brush with cancer prompted her to begin studying what’s known as integrative medicine.

Think of it as an even more prodding, holistic form of primary care. The physician dives deep into the patient’s lifestyle via a lengthy intake form. What did you snack on yesterday? How is your sex life? How are your relationships with friends and family? They employ Eastern practices like acupuncture, if appropriate. They analyze the chemicals in your blood and can connect them to behavioral health issues. Matthews does this through the NutrEval, a broad analysis of blood and urine tests that she describes this way: “It’s like looking at your car exhaust and working backwards to diagnose.”

This sort of research has a significant public health component for communities like Frazier Courts. Writing in the journal Environmental Research, economist Rick Nevin linked lead exposure—not poverty or drugs or overpopulation—to the crime wave of the 1960s that lasted through the mid-’90s in New York City, a plague that terrorized many of America’s largest urban areas. Black’s NutrEval turned up high levels of lead and mercury, which Matthews said would explain his lifelong battles with attention deficit disorder and depression. Imagine what could be accomplished in an impoverished community with access to tests like this.

“When I saw the report and it mentioned all those things and it didn’t know me, I started looking around, and I said, ‘You’re spying on me!’ ” Black says.

Matthews helped him change his diet, introducing fruits and vegetables and nuts and organic meat. She got him off his routine of using the elliptical, which put too much stress on his joints. He began exercising on an upright bike rather than a stationary, which was compounding the problems in his lower back. She had him stop using the treadmill on an incline, and he gets in between 15,000 and 20,000 steps per day.

His new regimen has helped him return to a normal life. He hasn’t taken a painkiller in months. He no longer has trouble walking or sitting for long periods of time. Plus he’s sleeping well.

“It’s a transformation,” Dysert says. “He’s back to being the person we knew was there, that we know and love and respect.”

But Albert is acutely aware that his experience is not the norm, especially among residents who remain in Frazier Courts. He has a saying that comes off a bit corny until you think of his life story. It’s a formula: the three E’s plus H plus T equal S. Education, exposure, experience, humility, and time added together will equal success. He hasn’t lived in Frazier Courts in decades, but he hasn’t forgotten that he’s still his father’s son.