Matthew Brinston died when he was 20. The Lancaster native and his band, Fever Dreamer, were on the verge of breaking out, having just signed a record deal with Sumerian Records. But on November 2, 2013, after a night of partying at his band manager’s house, greater forces brought his plans to a screeching halt, then threw them headfirst into a DART rail station near Fair Park.

Brinston was a passenger on a motorcycle that crashed, leaving him with a broken neck and a subdural hematoma. Doctors at Baylor University Medical Center shaved the curly hair from the right side of his head and made a 4-inch-long incision in his skull to drain the blood from his brain. As doctors would tell him later, for a short period during his nearly two-week hospital stay, his heart stopped. It was then, Brinston explains, that he had a spiritual experience.

“Jesus was right in front of me, looking down,” he says. “He gave me this smirk—this smart-aleck smirk—like, ‘What are you doing?’ ” 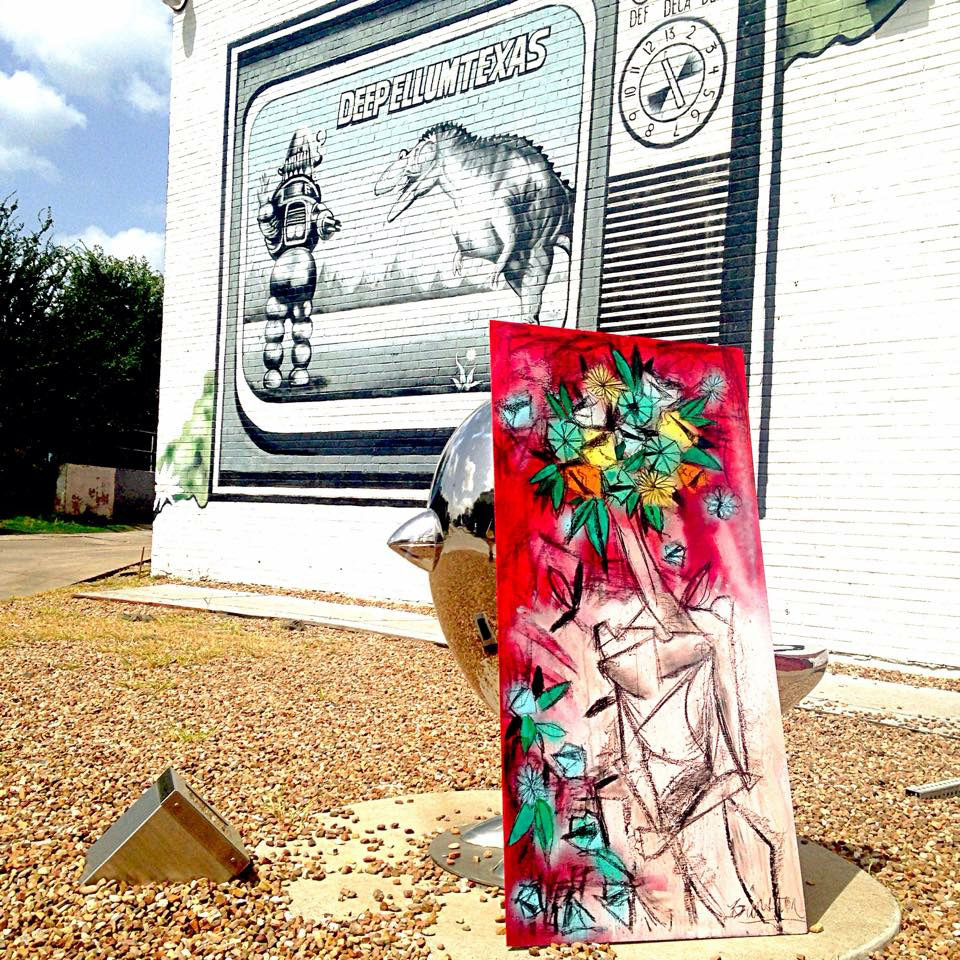 Brinston periodically leaves free paintings around town for people to find.
Brinston recovered, forever changed by the experience. He gave up drugs and alcohol and strengthened his devotion to Christianity. He also took up painting—something a high school teacher who’d noticed his knack for drawing had encouraged him to do—as a way to keep his mind off things. It quickly grew to be more than merely a distraction.

In January, Brinston plunked down the entry fee for the Dallas Observer Artopia show, figuring it would be $50 down the drain. To his surprise, he sold several pieces. By March, he’d landed a solo show at Deep Ellum’s Mokah Gallery. A chance coffee-shop encounter led to a collaboration with Bonton Farms, a food-desert-relief project in South Dallas, for which he contributed two murals this summer.

More than just a way to make ends meet—and he does, living solely off sales and commission pieces—Brinston views his art as a way to give back, whether through works like his Bonton Blessing mural or more direct routes. In June, he began leaving original paintings around town for passersby to find and keep, announcing the whereabouts of each drop on social media. “This dude messaged me like an hour after I put my last one up and said, ‘I just got a speeding ticket trying to get from Las Colinas to where your painting was,’ ” Brinston says, laughing.

Rather than let the hair grow back around his scar, he prefers to leave it exposed—a physical reminder of a painful past. Having been given a second chance, he’s determined to make the most of it.

“I’d never, ever felt like I was doing the right thing before I started painting,” he says. “I’ve never felt as at peace with what I’m doing as I do now.”