We parked in a muddy lot and followed the sound of thrumming Latin music until we came to a rope separating us from the entrance of LEVÚ Discotheque.

“It’s international night,” the bouncer said, checking our IDs. We begrudgingly dropped $10 each for cover and walked inside.

The French-inspired space is long and narrow, with a rectangular bar at its center. Beyond the bar, the glow from columns of LEDs and bursts from strobe lights illuminated a packed dance floor. A portrait of Napoleon Bonaparte hung on one wall. Nearby, a bachelorette party smashed a glass.

My friend and I backed away from the shards only to be engulfed by a cloud of hookah smoke. “Sex on the Beach” is the most popular flavor, but it’s an off-menu secret.

A bottle of Belvedere Vodka with a sparkler in the top brought to your table by an attractive young woman wearing impossibly high heels. She might even flirt for a minute if you’re lucky.

To see Belvedere Vodka and more of our favorite drinks, check out our Cocktail Hour gallery.

I couldn’t commit to scented smoke, but I’d need a drink if I planned to hit the dance floor. French text (some from the poem “Parfum Exotique”) lit up the sides of the bar. We fought the crowd and procured drinks from the bartender. When I sipped my vodka tonic, I recoiled so hard that I spilled some on my notebook. One does not visit a nightclub for craft cocktails. One visits a nightclub to tear it up on the dance floor and hopefully hook up off it. Still, my drink cost an unforgivable $9. My friend offered: “Mine tastes like diesel gas and Coke.”

Icicle-like lights dripped over the crowd of dancing partiers. We surveyed the floor: salsa-dancing couples; a woman wearing leather chaps; a guy with slicked hair and a woman in red dancing (well, making out) so fervently that she dropped a glass. When the dude carried-slash-dragged the lady away, she kicked my friend in the shin. 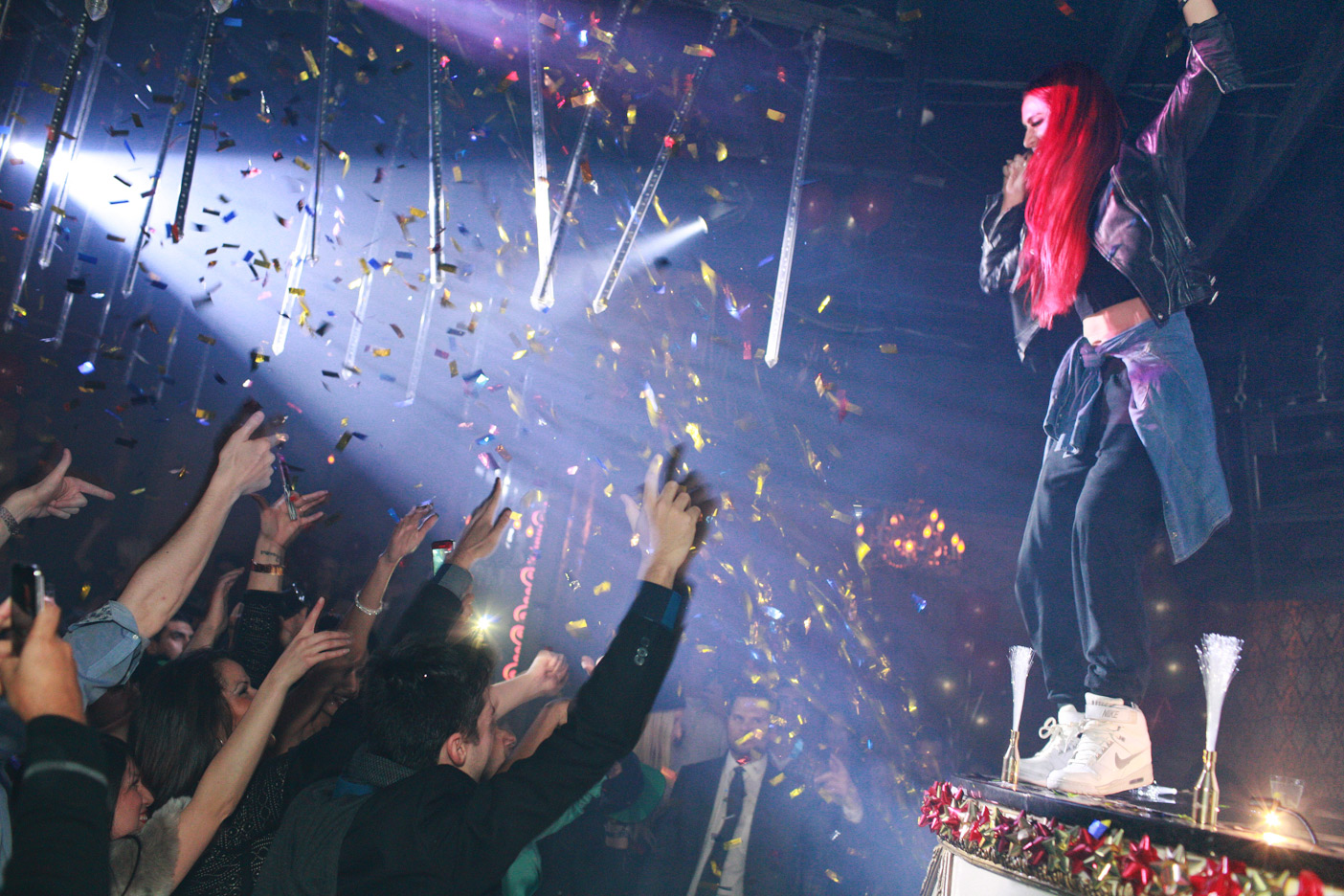 But he was distracted from the pain when two women in crop-tops and miniskirts leapt up to the back of the nearby booth and began gyrating. We pretended not to watch the sexy spectacle, but I caught the eye of the dark-haired girl and raised my glass appreciatively. She smiled back. Soon, the dancing ladies pulled a woman in a black see-through frock up into a three-way grind. When the DJ played Pitbull’s “Como Yo Le Doy,” we couldn’t help but dance a little, too.

I decided to find the boss. Dodging broken glass and perilous stilettos, I chased down a bouncer who led us into a little hallway. Avi Adri, the club’s owner, was on Facebook when we barged into his office. He told us he’s worked in Dallas clubs since he was 16, more than 20 years.

“I have family who work in developing apartments,” he told me, explaining that he could make more money doing that than running LEVÚ.

According to Nightclub & Bar, LEVÚ did between $20 million and $25 million in sales in 2014, making it the highest-grossing bar in the state, coming in at No. 13 in the publication’s annual ranking (by contrast, the Round-Up Saloon came in at No. 85, with $3 million to $5 million). My friend pointed at something on Adri’s desk: “That’s literally a money counter.”

“Still, what I like most is seeing people happy,” Adri said.

As we talked, people wandered in, friends who just wanted to say hi. One guy pointed out that Adri’s fly had been down this whole time. He zipped up, laughed, and looked at us: “Who wants a shot?”

Back at the bar, we clinked shots of bourbon and tossed them back. One more of those, and I’d be ready to give that dance floor another try.