My first time at Ten Ramen, I committed a cardinal sin of ramen-eating. I failed to finish my bowl in five to 10 minutes. I chatted. I dawdled. Rather than catch the noodles at their springiest, I let them expand in the broth.

It’s not my fault. Or, rather, I hope to be pardoned. Ten has created an ambience of neighborly comfort around food that is meant to be eaten quickly, slurped while standing at a counter lest carefully calibrated consistencies be lost. You’re pulled two ways. You want to linger; you can’t waste time. It’s a terrible, wonderful paradox.

The tiny West Dallas outpost’s atmosphere is casual. Tattoos peek from under t-shirt sleeves. On a warm night, bowls are slurped at a crouch near the stoop. Inside, a couple nudges their stroller under the counter, the sole dining surface, and the baby sleeps while they pull toward them the broad-lipped, hand-thrown bowls that feel good in your palms. Inclined toward their companions, leaning on elbows, people converse. Or couples face the open kitchen, eyes down, silently communing. There’s a subtle acknowledgment of others—the person at your elbow who reaches for the garlic press or jar of togarashi spice or basket of shallow spoons. These touches of social grace have a warm cast of urban living, of shared space deftly navigated.

The place resembles a Tokyo ramen counter at lunchtime, when patrons eat quickly in silence after ordering from a wall-mounted machine. “In Tokyo in 1970, people were running around, the economy was great, people busy,” says chef and owner Teiichi Sakurai. “That’s the style in Tokyo—just stand and eat and then go back to work. That style, I grew up with it.”

You want to eat the ramen properly—promptly—to relish its quality. Since he opened Tei-An in the Arts District, in 2008, Sakurai has been making Japanese food that’s remarkable in its authenticity and refinement. Meals at Tei-An are some of the best I’ve had in Dallas. To head his ramen venture, Sakurai chose Matthew Hoa, previously at Tei-An. Hoa is joined by sous chef Christian Koelling. The duo charms with earnest passion and off-beat banter. Sakurai spearheaded recipe development and sourcing. But now, six days a week, it’s just Hoa and Koelling making really good ramen. 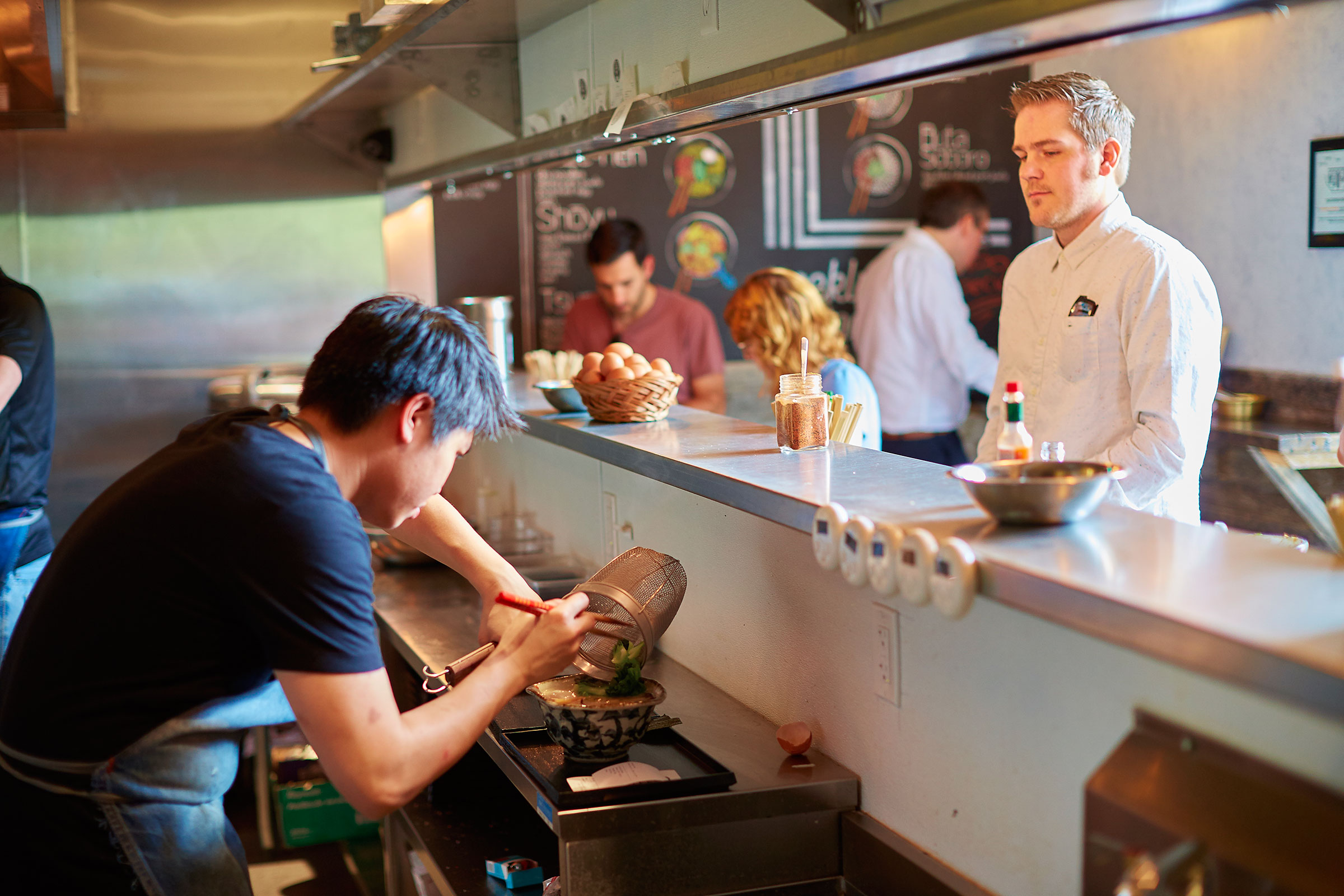 Ramen—the marriage of broth, noodles, and toppings—is not monolithic. In Japan, the dish varies by region: heavy and pork-based on the southern island of Kyushu, lighter and miso-based on Hokkaido. In U.S. cities such as Los Angeles and New York, there’s a trend toward such distinctions.

With its light, clean, pure flavors, the ramen at Ten reflects Sakurai’s Tokyo-influenced palate. Each component should be well executed and distinct but with a subtle enough touch that flavors don’t joust. Instead, they form a harmonious whole. “What you’re thinking about is the negative space between things,” Koelling says. His description reminds me of a Japanese Zen garden, each plant and rock connected but separate enough to meditate upon individually. “It’s easy to get wrong,” he says, “to mess up one component so it doesn’t come together.”

“That’s the style in Tokyo—just stand and eat and then go back to work,” Sakurai says. “That style, I grew up with it.”

This is why ramen breeds connoisseurs and fanatics.

Primordial is the broth, especially classics like tonkotsu and shoyu. Ten’s tonkotsu is not the hearty style from Hakata, with broth that’s opaque from boiling pork bones for hours, collagen and marrow turning it milky-creamy. For less oily, aggressive flavor, they use concentrated pork base rather than pork bones. The carcasses they boil down are chicken. Kombu (seaweed) adds depth. Silky soft without coating the mouth, the broth is lighter, subtle, and soothing. (At Tei-An, soba cooking water lightens the tonkotsu even more, for an effect like liquid gossamer.) But I wanted one final flavor note for impact, for roundedness like the ringing of a bell. I made a mental note to order extra pickled ginger.

The shoyu (soy) broth, Tokyo’s classic, is also chicken stock-based, with clear, concentrated flavor and soy that’s mellow and complex. Avoiding the pitfall of salty flatness, it’s limpid but well-rounded. They skim the fat from their stocks and replace it with judicious amounts of something more intense, like house-made chicken schmaltz accented with white and black pepper. Floating in small droplets, this forms an olfactory welcome mat, preparing you for what lies beneath. 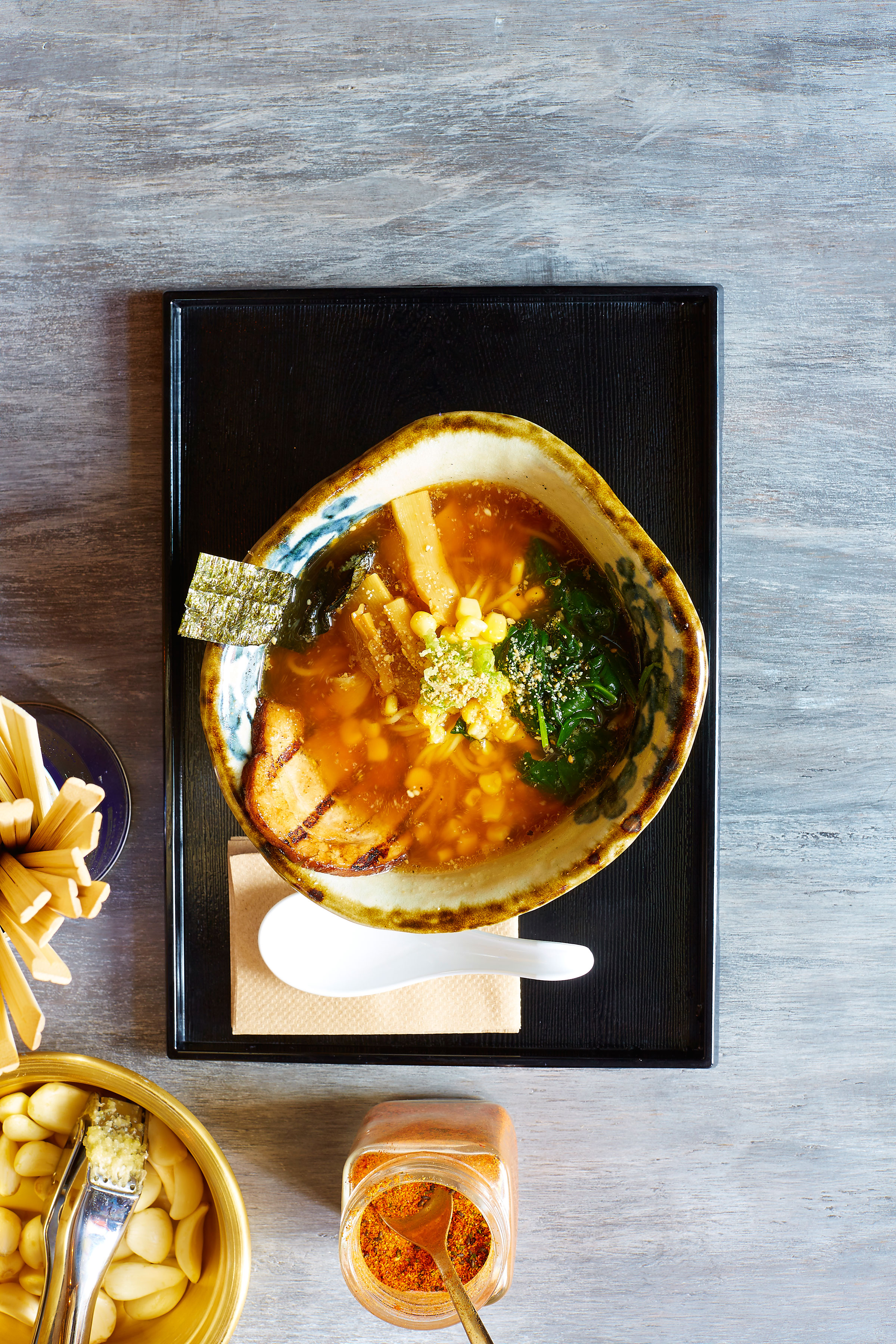 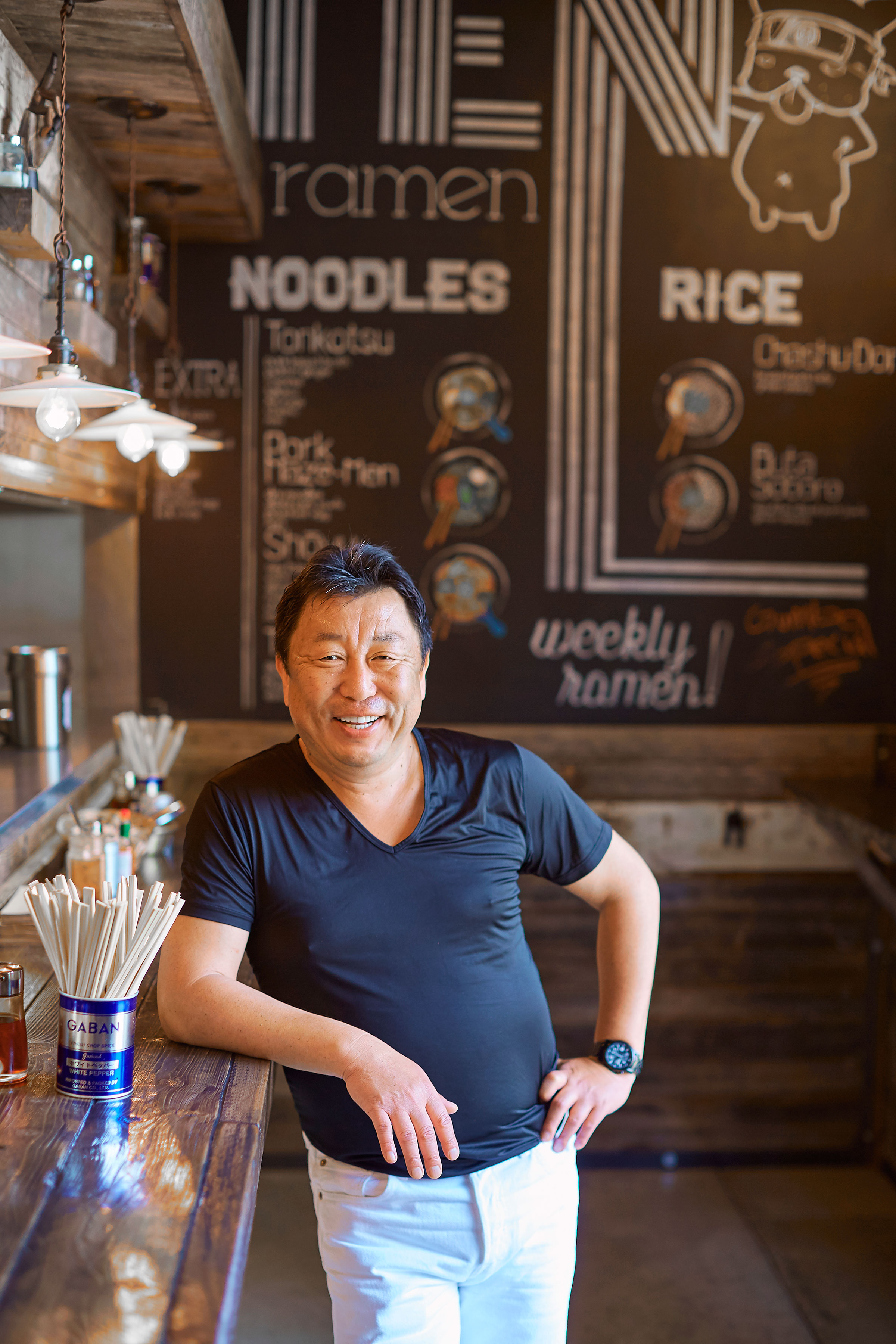 Chef Teiichi Sakurai
The noodles are made especially for Ten by Sun Noodle in California. Sakurai customized more than a dozen parameters, from thickness and cut to weight, edge, bite, and cooking time. The noodles are lively and bouncy, with the eggy richness, density, and slight alkaline quality for which good ramen is known.

Koelling says he will add an egg to anything. But know that it will come slow-poached, not, as in many places, soy-marinated and soft-boiled. The yolk is runny; it asserts itself, changing the broth. You have to want that. There are cases when its velvety decadence might throw off a balance you enjoy. (And, in one case, an egg left too long in the ice bath cooled my broth dramatically.) But you will never regret a second slice of chashu. The same for additional bok choy or spinach, without which I found there was too much noodle and not enough green. At several dollars per addition, the price rises fast. Ultimately, these are small quibbles. They’ve nailed it. The architecture of their classics is sound.

With specials, they get to experiment. Roasting cabbage for hours gave a vegetarian special’s broth bold, earthy flavor. Grilled eggplant on top was flabby and slightly bitter. But olive oil droplets whispered of sautéed garlic. The tofu I added—and livened with chile oil—was custardy. And a crush of fresh garlic partway through completed the comforting, vegetal roundedness.

For lobster ramen, Hoa roasted lobster heads tossed in chile oil and togarashi spice, then married them with a miso broth fortified by sake and mirin. The result, multifaceted and delicious, was topped with delicate crab in a pungent house-made XO sauce. “The man who ordered the last of the batch ordered three bowls,” Hoa says. I can believe it. 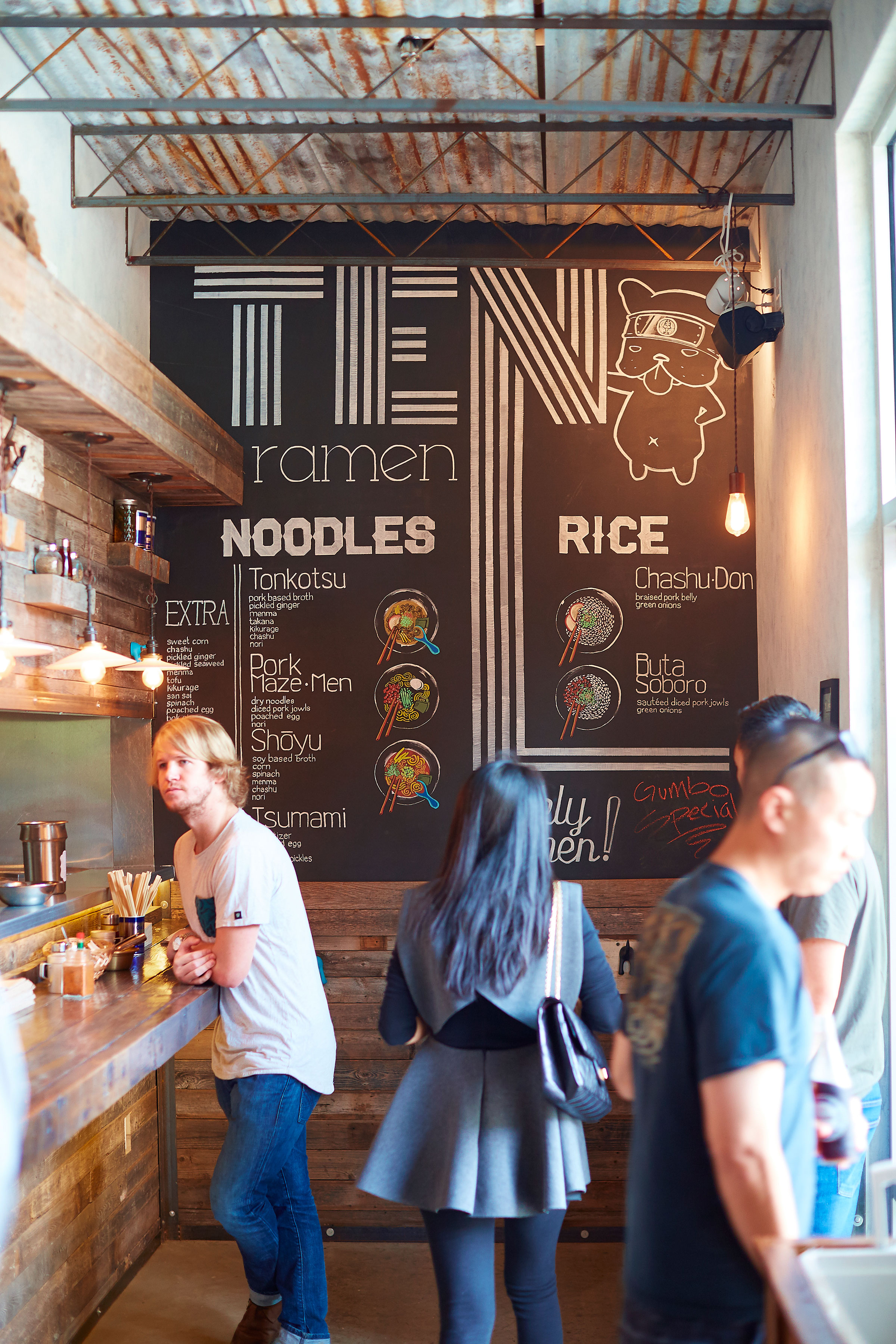 Why venture, then, beyond the brothy brotherhood? Because of the mazemen, a “dry” ramen. Without the broth as a flavor element, layered and complex, chefs must coax flavor from elsewhere. They pull that off marvelously. Under scallions, fried shallot, and long slivers of fresh cucumber, marinated diced pork jowl has been caramelized in a pan with soy, sake, and mirin for an exquisite balance of rich, bright, and boozy. And that umami undertow? Smoked bonito flakes give the oil in which the noodles are tossed a deep, oceanic funk. Break the egg, let it run like a sauce, slithering its way toward the pockets of sake-mirin brightness. Add spinach, and the mixture is magic.

This and two rice bowls, and you’ve run through the menu. But these chefs love a challenge. “We have a bunch of ingredients back here,” Hoa says, inviting special orders. Japanese lunch-break risotto? Bring it on.

This goes hand in hand with the culture of regulars they’re creating. As in cheesemaking or winemaking, manipulating so few ingredients hones a fine practice of appreciation. One evening, I lingered late and ogled regulars’ variations on themes. I felt myself getting bolder, noting flavor patterns, starting to scheme. In time, I’ll figure out my special request. I’ll throw down the gauntlet. And I will try not to dawdle.