In February, Nate Fielding’s company, based in Cambridge, Massachusetts, offered him a relocation. There was 5 feet of snow in Massachusetts; it was 85 degrees in Dallas. Fielding chose Dallas.

Walking to work was important to Fielding, so he focused his home search downtown, choosing The Kirby Residences on Main, which he moved into in March. “In a month and a half, I now know 20 people in the building,” he says. “Everyone’s really friendly here. That’s a big plus for me.”

Fielding, a 30-year-old security engineer, is one of the 8,200 residents living in Dallas’ core, which has a rental occupancy of 93 percent. Fifteen years ago, Fielding would not have found many restaurants or bars to walk to. People simply weren’t thinking about downtown as a residential option, so those businesses didn’t flourish. That’s changing. “We’re focusing more on experiences as it relates to getting more people here and, very importantly, keeping the people we’ve got as they continue to make changes in their lives,” says John Crawford, president and CEO of Downtown Dallas Inc., a nonprofit focused on all things downtown. Crawford no longer talks about the Central Business District as its own entity, referring instead to downtown as a 15-district area that covers an expanse from Deep Ellum to the Design District, from Uptown to the Cedars. More than 40,000 people live in that area. Crawford says they are millennials, empty nesters, a few families, and people searching for low-income and work-force housing options. 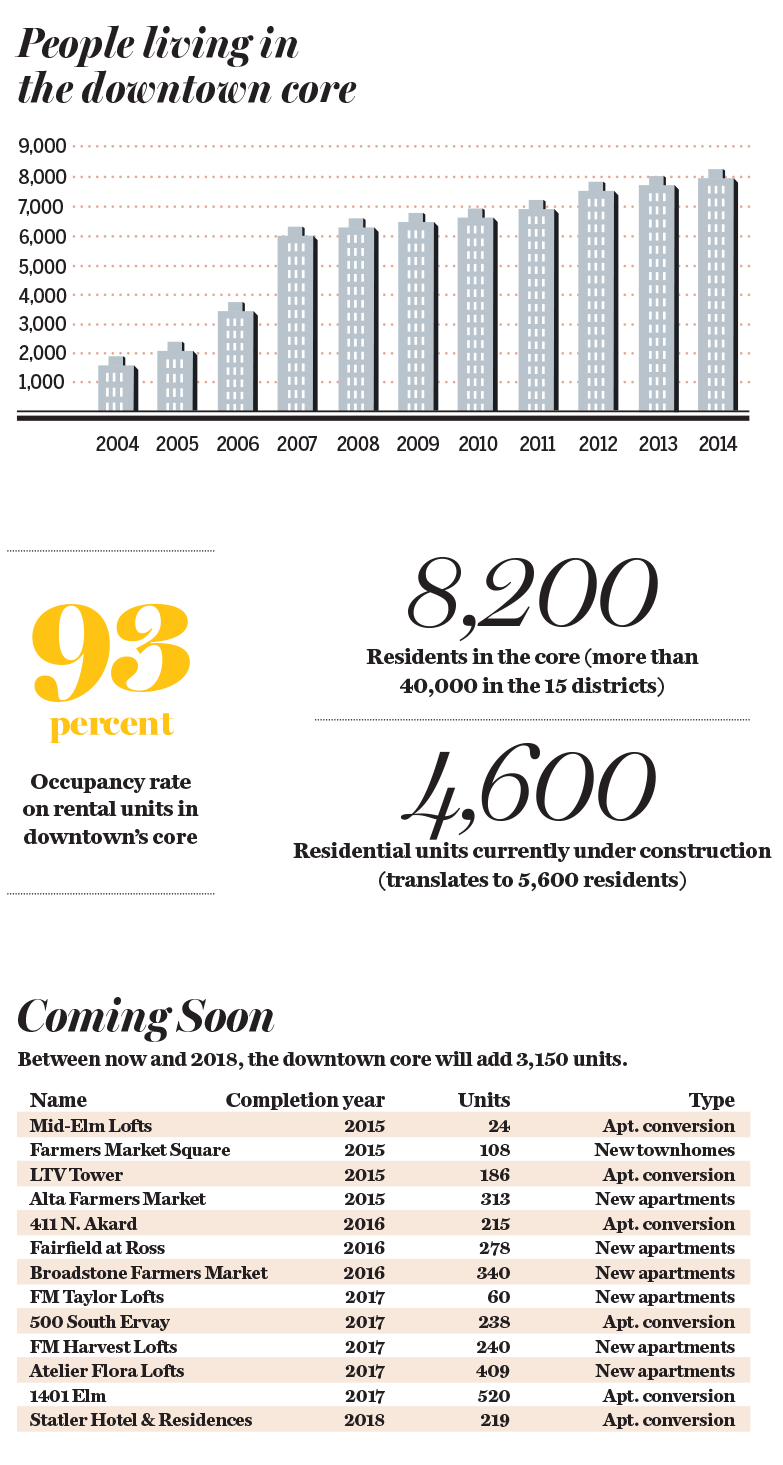 Early downtown developers are starting to see their investments pay off.

When Shawn Todd graduated from Baylor in 1985, he took a job with a development company. “The day I started work was the first day the real estate market crashed,” he says. But he held onto his job for a few years before he was finally let go, in 1990. That’s when he started his own real estate company, Todd Interests. Todd built his company by acquiring hundreds of acres of land in Collin County and buying broken retail centers, rehabbing and selling them.

In 2006, he turned his attention to downtown Dallas. His first project: turning the 1930s U.S. Post Office and Courthouse into 78 units with retail. He began the work when, for a second time in his career, the economy fell out. “I sold everything I had,” Todd says. A few years later, in 2011, he finally opened 400 North Ervay. It was 100 percent leased in six months. “At the time, literally, it was said that you couldn’t get greater than $1.60 per foot rent in downtown Dallas,” he says. “We opened averaging north of $2.”

Following that success, Todd took on another challenge: the I.M. Pei-designed One Dallas Center across the street. Built in 1978, the mixed-use building was completely renovated by Todd Interests. In late April, Todd got his certificate of occupancy for the final floor of the building. By that time, it was already 60 percent leased.

He credits his success downtown to the people who live there. “There’s been a vanguard for downtown that’s said, ‘There’s a legitimate community for our city for which we want to live.’ That’s huge,” Todd says. “All God’s people need to be downtown.”

Critical mass for the core itself is said to be around 11,000 people. Once the city hits that, more retail, more restaurants, and maybe—finally—a grocery store will move in and succeed. Currently, land prices are high and rents are low, though rates per square foot have increased from $1.10 to $1.50 per square foot five years ago to $1.30 to $2 today. Many new building projects are subsidized by tax increment financing, which is a public financing method used for redevelopment, as well as historic tax credits. And the core is out of old office buildings to repurpose. But that’s okay, says Jack Gosnell, senior vice president of CBRE/UCR. “It’s all renovation work right now,” he says. “That’s the stage you go through before you start building ground up. Now what’s going to happen is we’re going to start eating parking lots.”

Outside of the Farmers Market, where developers built the first phases of townhomes as early as 2001, downtown offers only a handful of units for sale. Gosnell says that TIF-funded buildings and buildings funded with historic tax credits tend to have a mandatory lease period of five years. At the end of that five years, landlords can start selling units.  “At some point in time, those buildings will be converted into for-sale,” Crawford says. “It’s all based on supply and demand, timing, and success for that to happen. So we’re probably very, very early into the stage of building for-sale units.”

Plans have been announced to create 4,600 more units in the next two years (equivalent to 5,600 residents). That—along with a proposed bullet train between Dallas and Houston, thousands of additional hotel rooms, and additional retail and restaurants—should propel the 15 districts’ population, already more than 40,000, past critical mass. “I can’t overstate the importance of residential in terms of where we’re headed,” Crawford says. “It’s made a huge difference in helping to get downtown re-established as a place to drive to rather than drive through.”