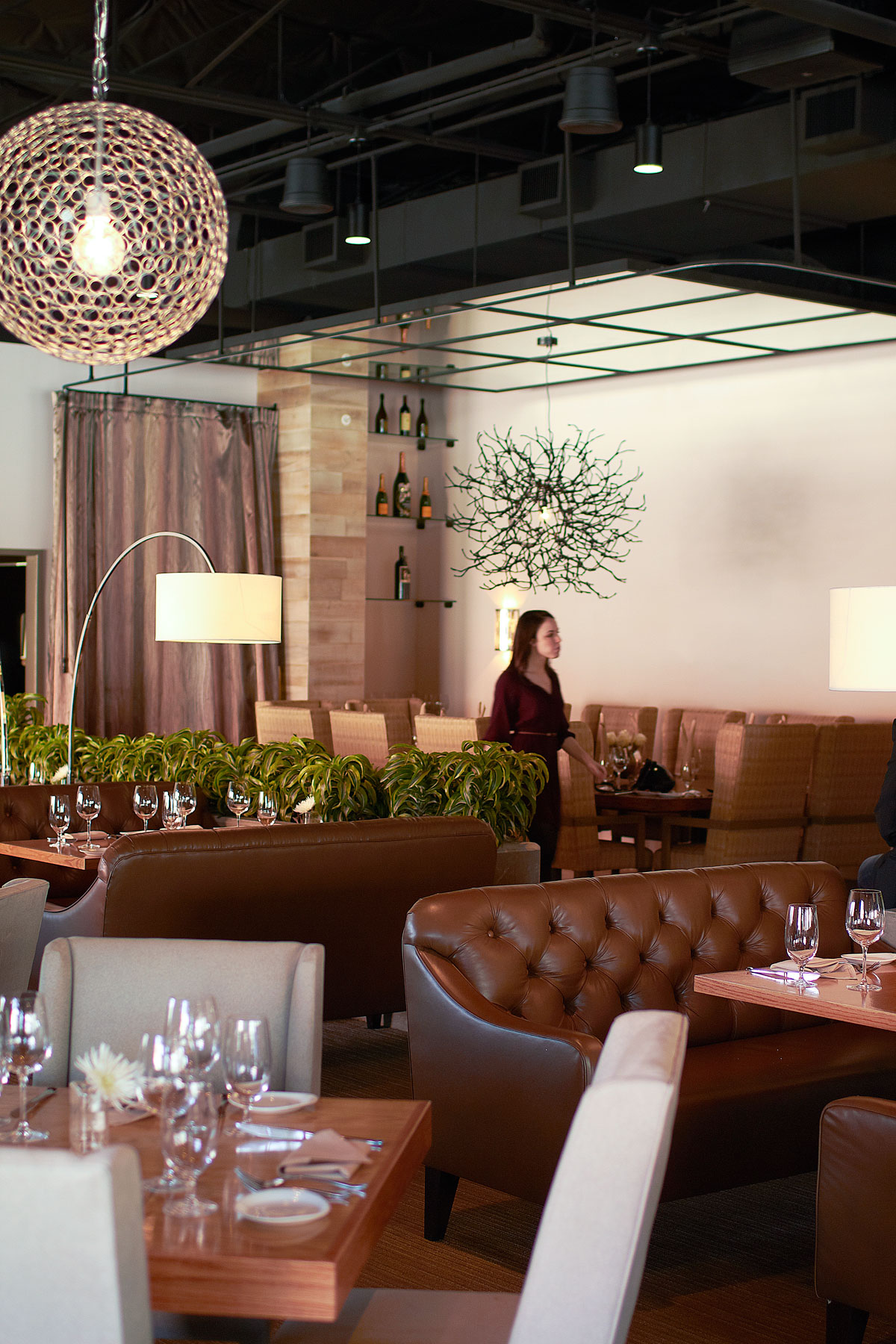 Oak. Photography by Kevin Marple
Photography by Kevin Marple
On a chilly November morning, the corner of Hi Line Drive and Slocum Street is one of the most tranquil in the city. Low-slung buildings sit back from the tree-lined boulevard, with its well-manicured median and meandering sidewalk. This is one of the city’s premier shopping destinations, but it has none of the hubbub of NorthPark or the glitz of Highland Park Village. You can hear the faint buzz of cars on nearby I-35, and even though you can’t see the Trinity River levee, you can almost pick up the scent of the grassy wilds of the floodway.

The area appears not unlike it has for the past 40 years. The single-story warehouses with front-facing offices and easily accessible loading docks, while quaint and out of date compared to modern-day warehousing facilities, have proven surprisingly versatile through the years, easing the transition from an industrial zone to a trade-focused design and showroom hub, and finally to an emerging urban neighborhood. Up the street, though, there are indicators of change. A glistening high-rise development shoots up from the ground, overlooking the highway. There are new apartments, restaurants, and cafes.

That the Design District is becoming more of what developers like to call a “live-work-play environment” is not surprising. Like Uptown, it enjoys close proximity to downtown and North Dallas. But instead of master-planning development and scraping antiquated buildings for cookie-cutter versions of urban streetscapes, the neighborhood has grown organically—unlike most of Dallas’ newer urban communities. Apartments fill in and around the existing buildings; warehouses and showrooms close and reopen as restaurants. And that evolution doesn’t look like it is going to stop anytime soon.

In November, an investment group featuring some of the biggest names in Dallas—Tim Headington, Ray Washburne, the Hunt family—gobbled up huge tracts of real estate, including the Dallas Design Center and the Decorative Center. In total, they purchased about 33 acres and 700,000 square feet along Hi Line, Oak Lawn, and Stemmons Freeway, with a plan to develop more high-rises as well as find uses in the existing buildings for designers and other tenants. In a way, the investment in the Design District brings the area’s history full circle, a history that began, like this new chapter, as a real estate play. 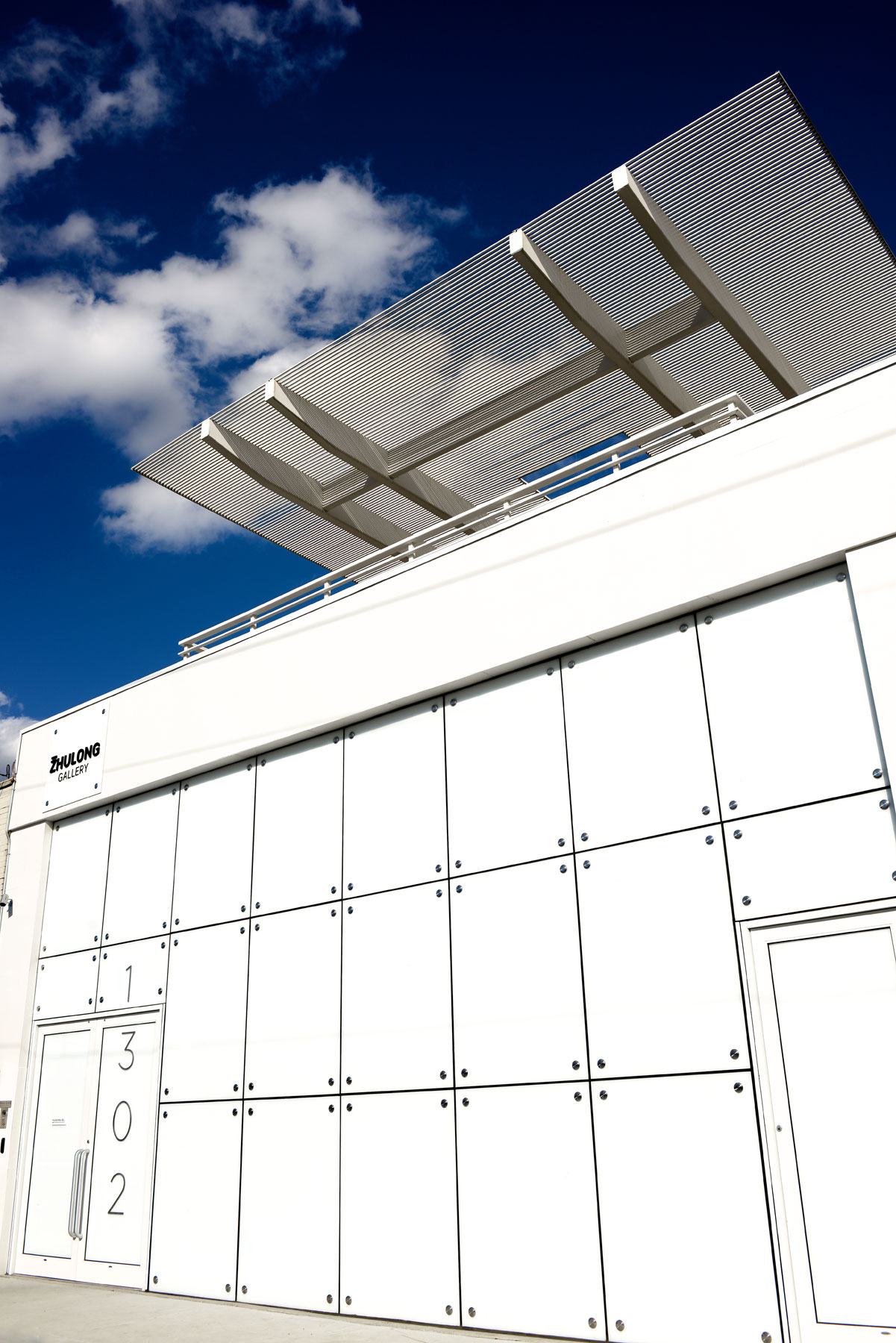 After three days of unrelenting rain, the Trinity River was, at points, 1.5 miles wide and more than 52 feet deep. It ravaged adjacent neighborhoods, including downtown. More than 4,000 people were left homeless. Damage was estimated at about $2.5 million (about $60 million in today’s dollars). Five people died. When the flood waters finally receded, city leaders knew a long-term solution to flooding was paramount to the city’s future.

At the time of the flood, Leslie Stemmons was a fire insurance and real estate salesman working largely in Oak Cliff. In the years after the flood, he would develop neighborhoods like Winnetka Heights and areas around Bishop Avenue. But perhaps his most influential contribution to Dallas would come from serving on the Ulrickson Committee, which was formed in 1927 to implement George Kessler’s 1911 plan for Dallas. Kessler, considered one of the leading urban planning experts at the time, had been hired by city leaders to come up with a master plan for Dallas, but it was only sporadically implemented, and it was revised again in 1918. By the late 1920s, the city was finally ready to act on a river rerouting component, and Stemmons recognized an opportunity.

He rallied fellow business leaders to back the sale of bonds that would fund levee construction and then formed the Industrial Properties Association. When construction of the levees finally began in 1928, the association divided the land in the former floodway among themselves. Stemmons believed moving the Trinity could spark a real estate boom north of downtown. His instinct was right, but his timing was off. A year after the formation of the Industrial Properties Association, the stock market crashed, and the country settled in for the Depression. Leslie Stemmons died in 1939. It would fall to his son John to turn his land grab into a financial windfall.

Between 1930 and 1950, Dallas’ population grew from 260,475 to 432,805. The city tripled in land mass, from 45 to 120 square miles. And after the war, people and investment came pouring in to the city with a reputation for a freewheeling business attitude. John Stemmons began to find developers interested in his family’s land. But it was a 33-year-old grain salesman named Trammell Crow who would realize its full potential.

Crow began developing warehouses on parcels he acquired from Stemmons. After a few successful deals, he realized demand was so high that he could build warehouses before he had tenants lined up to lease them. This aggressive approach to development was nearly unheard of at the time, but it wasn’t the only innovation that Crow introduced to real estate through his work in the Design District. Crow helped design the warehouse spaces, making them single-story structures with offices in the front. The straightforward simplicity of the buildings helped lure tenants out of older, multistory brick warehouses.

The biggest boon for the area came in 1952, when Stemmons donated more than 100 acres to the Texas Highway Department for the construction of Interstate 35. Later renamed Stemmons Corridor, in honor of Leslie, the road was a godsend to the warehouse district. It became the dominant model for postwar growth: adding highways to create value on previously undervalued land. Crow used these strategies to create the world’s most successful real estate empire. But his business acumen extended beyond the nuts and bolts of the real estate industry. When he was in Chicago during World War II, he visited the Chicago Merchandise Mart and its trade shows. Crow decided to replicate the model in Dallas, leading to the development of the World Trade Center, the Decorative Center, and the Dallas Design Center. It helped re-create a second wave of tenant interest in the Design District after the initial industrial users.

It was the Market Center development that would end Crow and Stemmons’ long partnership. Stemmons, still remembering his father’s struggles during the Depression, couldn’t stomach the high interest on the Crow investment. But the success of the Dallas Market Center would set the stage for subsequent rebirths. The Design District’s showrooms and trade-only design shops would eventually attract additional designers, galleries, and other creative industries to the area. 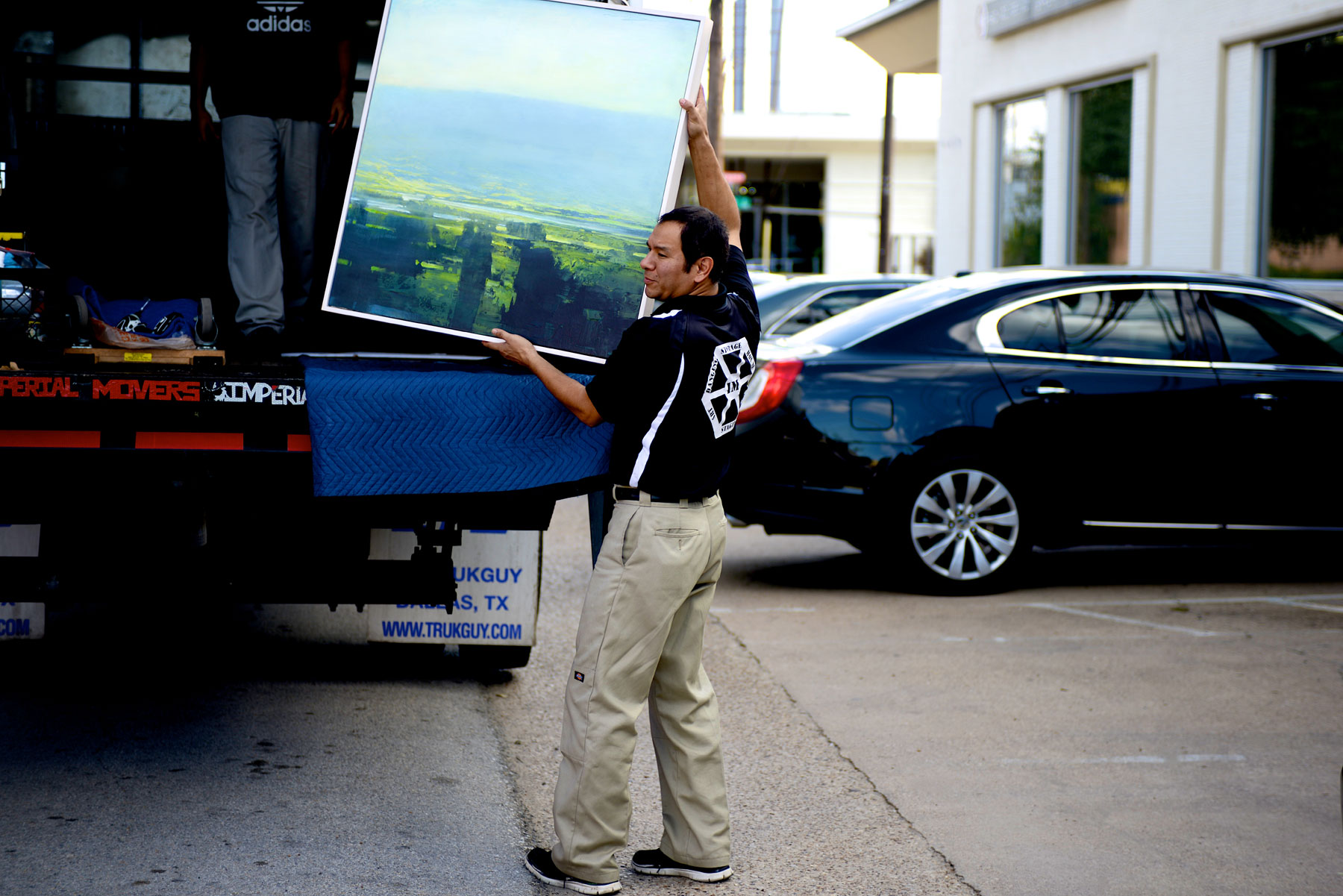 Photography by Kristi and Scot Redman
Photography by Kristi and Scot Redman
Trammell Crow created the model of the typical developer, so it is ironic that the developer who purchased some of the last Crow family holdings in the Design District was not your typical developer. Mike Ablon trained as an architect and engineer, studying in Paris and Rome. Beginning in the mid-2000s, he and his Lionstone Group assembled about 30 acres and 39 buildings. Unlike Crow, Ablon didn’t believe I-35 was the most important road in the Design District. Rather, he saw that Hi Line looped underneath the highway and connected to Victory and the Katy Trail, and that Oak Lawn Avenue also ran under the highway and connected to Uptown. The intersection of those two streets, he thought, could become the nexus of a new urban neighborhood.

At the time Ablon moved into the area, his vision of a mixed residential and commercial neighborhood wasn’t convincing—or even necessarily appealing—to a lot of the designers and other long-term business owners who had built and thrived on the Design District’s reputation for high-end and trade-only offerings. But Ablon proved that the two brands weren’t mutually exclusive; in fact, he believed they could help each other. Ablon had a few ground rules: no national chains, no mixed-use developments, and no razing of buildings. He wanted to capitalize on the area’s art and design reputation to lend it a cool factor.

Since Ablon began bringing in new kinds of tenants to the Design District, the area has boomed. Other developers—including Jim Lake, the developer behind much of the Bishop Arts District and another long-term landowner in the Design District—have built residential units and leased space to restaurants and retail. The result is something rare in Dallas, a new neighborhood that is rising out of an old one, yet not trampling it in the process.

That has its shortcomings. The streets are still designed for trucks, and much of the high-end retail is essentially located in refined strip centers. There are loading docks, set-back parking lots, and awkward intersections. The remnants of 20th-century development models are everywhere. But that roughness and lack of preciousness are what lend the area its charm. The Design District has shown that it’s possible to create something new and distinct by incorporating—and not destroying—the old.

Back to The Insider Guide to the Design District