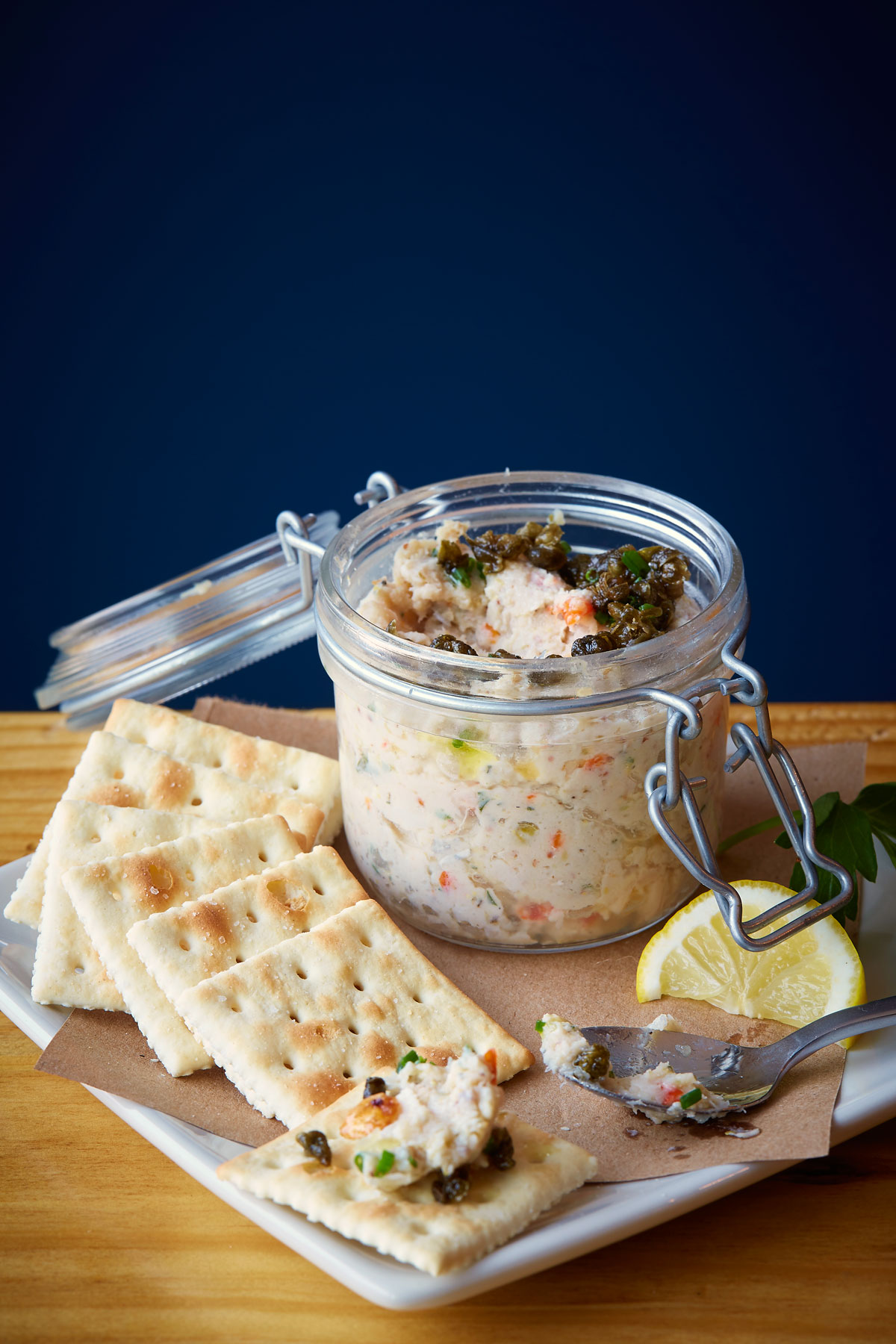 SURF AND TURF: Smoked catfish dip with fried capers
The specialty at Clark Food & Wine Co. is smoked meat, but I fell hard for the fish. It arrived on a board: a quarter-pound of Arctic char, perfectly cooked, its color like a shell, soft coral pink, pale guava, showing its stripes somewhere between salmon and trout. The center was silken, buttery, and yielding, the skin crisped and topped with a light mustard glaze. Cold-smoked 10 minutes, then finished in the oven, this fish, with its soupçon of smoke, was sublime.

In its execution and restraint, it was also emblematic of what chef and owner Randall Warder wants for his restaurant. The dish, added late in the planning, shows the synergy he’s seeking between the Old World and Texas, the classic and the new.

Smoke seduces him, too. He started in restaurants at 15 and has worked in Washington, D.C.; Cabo; Santa Fe; and Vegas. He has done private aviation catering, redone cruiseship-line menus, and launched restaurants from the humble to the five-star. He has traveled the world and fallen for the food of Spain, Italy, and France. But he remembers Gus, the diminutive butcher at the Mansion, where he worked nine years under Dean Fearing. 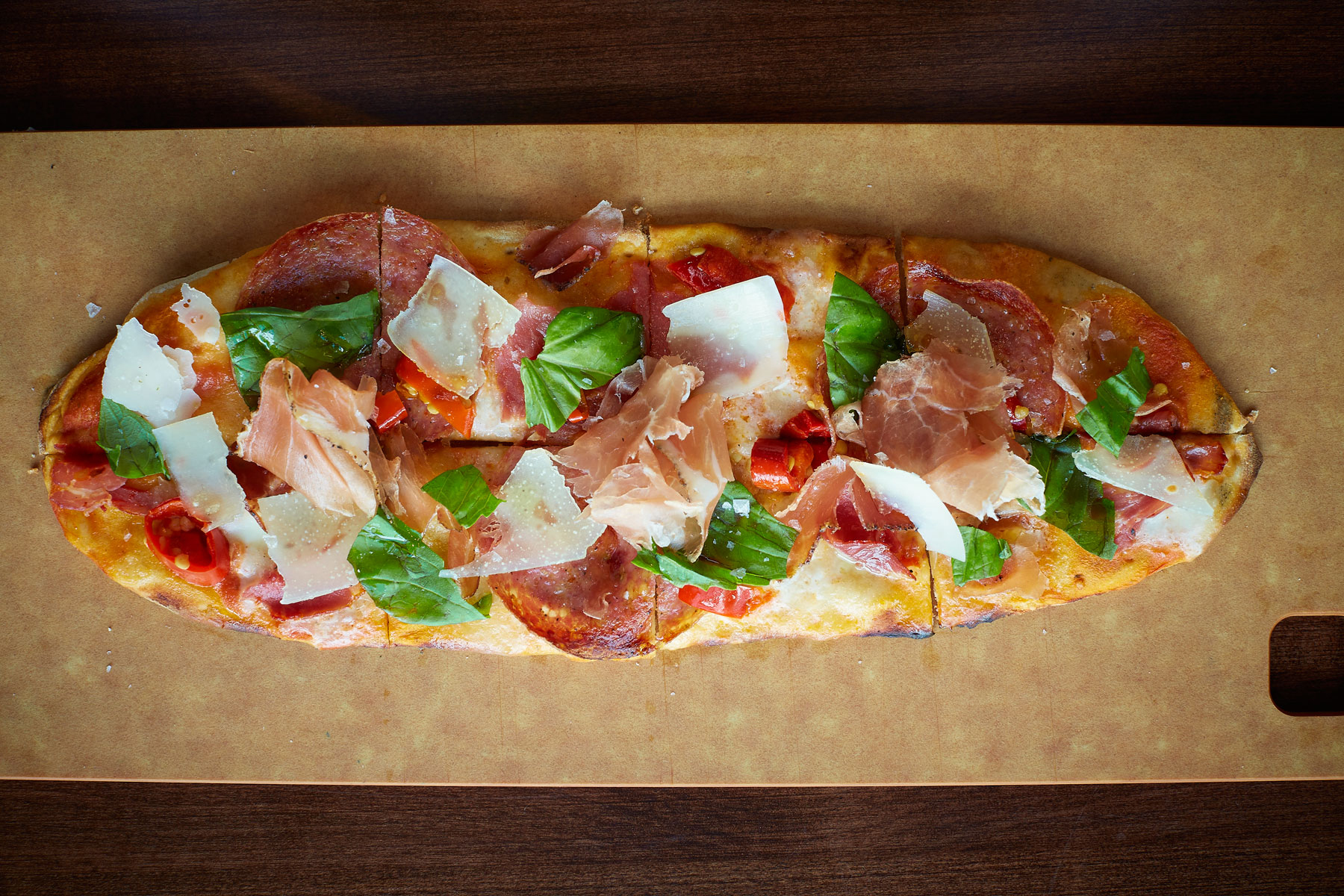 “Gus, he taught me how to break down everything from 109 ribs to wild boar saddles and venison saddles,” Warder says. “I got this real bug. We got a smoker and started making our own bacon—Canadian smoked bacon, lamb legs, and wild boar legs. We ran them as specials. Honestly, I have missed it since. Coming back to Texas, I thought, ‘Alright, this is an opportunity to do that piece that I liked so much before.’ ”

In trendy Lowest Greenville, it can be hard for a newcomer to distinguish itself among the tastefully reclaimed industrial spaces and menus of flatbreads and specialty smoked meats. What will stand out at Clark is a certain finesse—though, at times, restraint falters and things turn to noise.

The decor is modern, with soft, gentle touches. Lights glow above the bar; an array of mason jars with cucumber slices, olives, and maraschino cherries forms a rainbow across the quartz counter. Like an echo, a distressed pine wall glows back. On one night, from my seat, I could see into the open mouth of the gas-fired pizza oven. Warder is aiming for a menu that feels European, yet his eclectic offerings include a list of “Texas smokehouse” meats smoked over cherry, apple, and pecan woods. A roll of butcher paper lists rotating cheese and charcuterie board offerings. Items like mortadella venture beyond the usual prosciutto, but some staples seem translated for an American palate. The cheese board was lovely, with almonds and honeycomb, toasted baguette, and flatbread warm from the oven. But it was not adventurous. 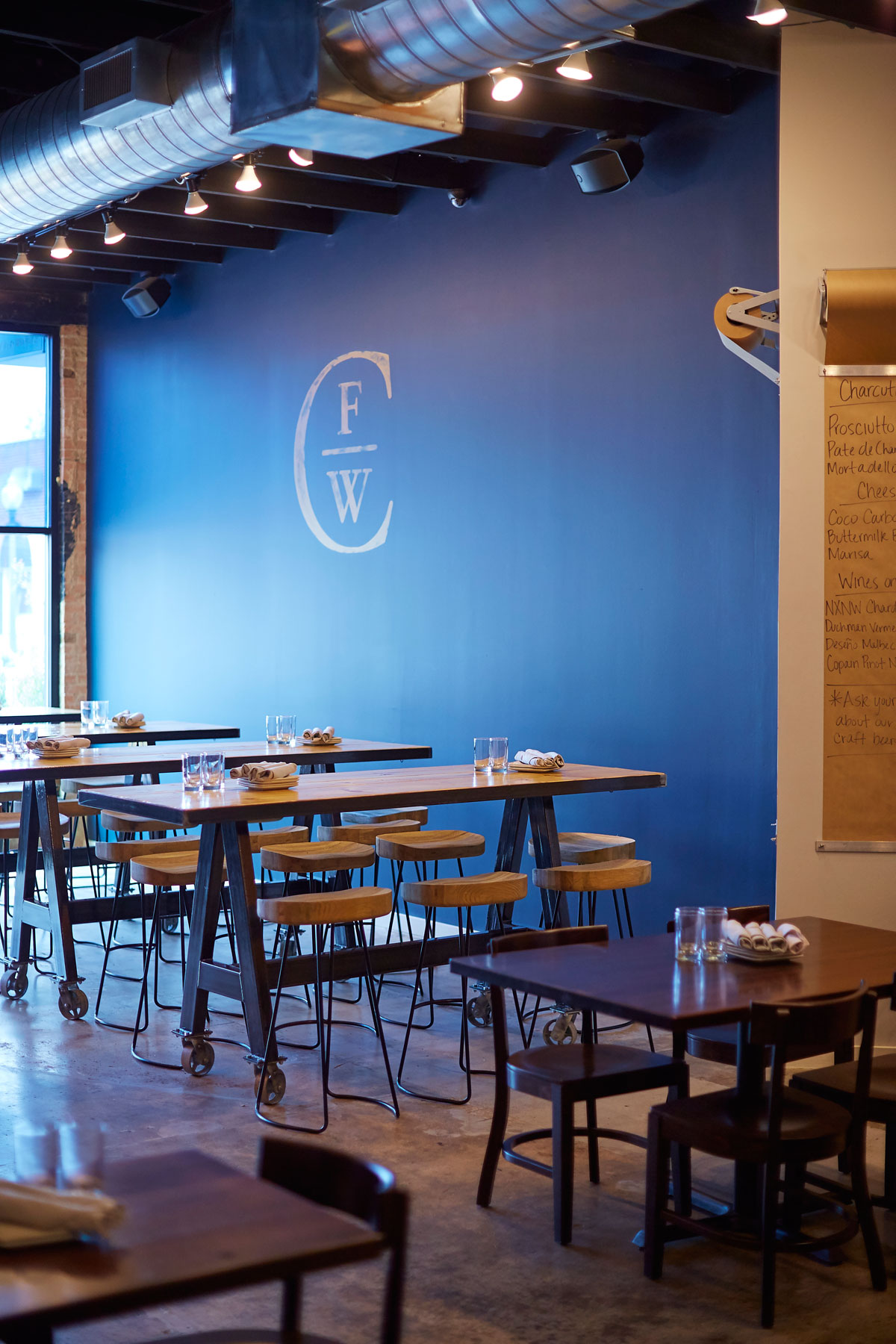 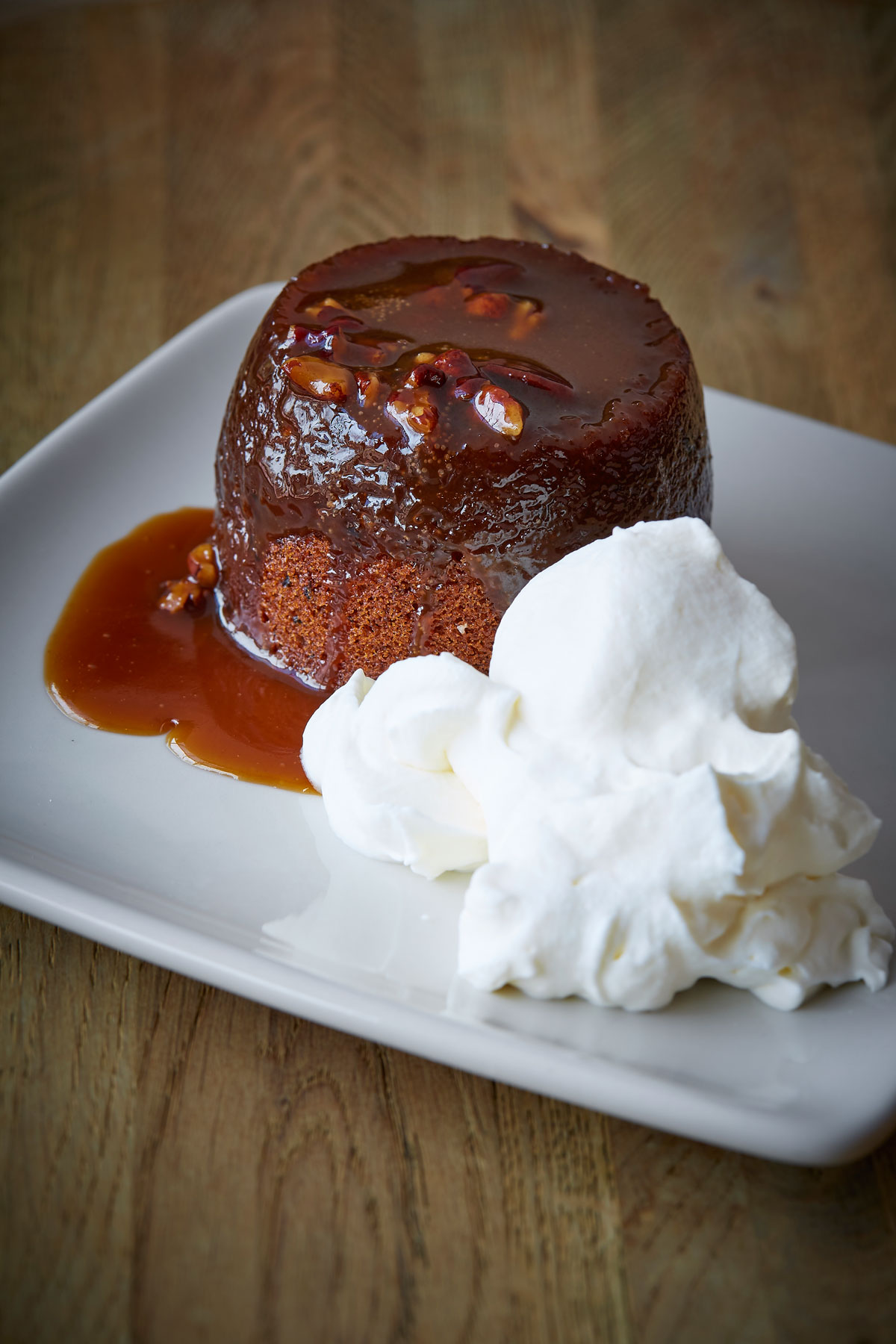 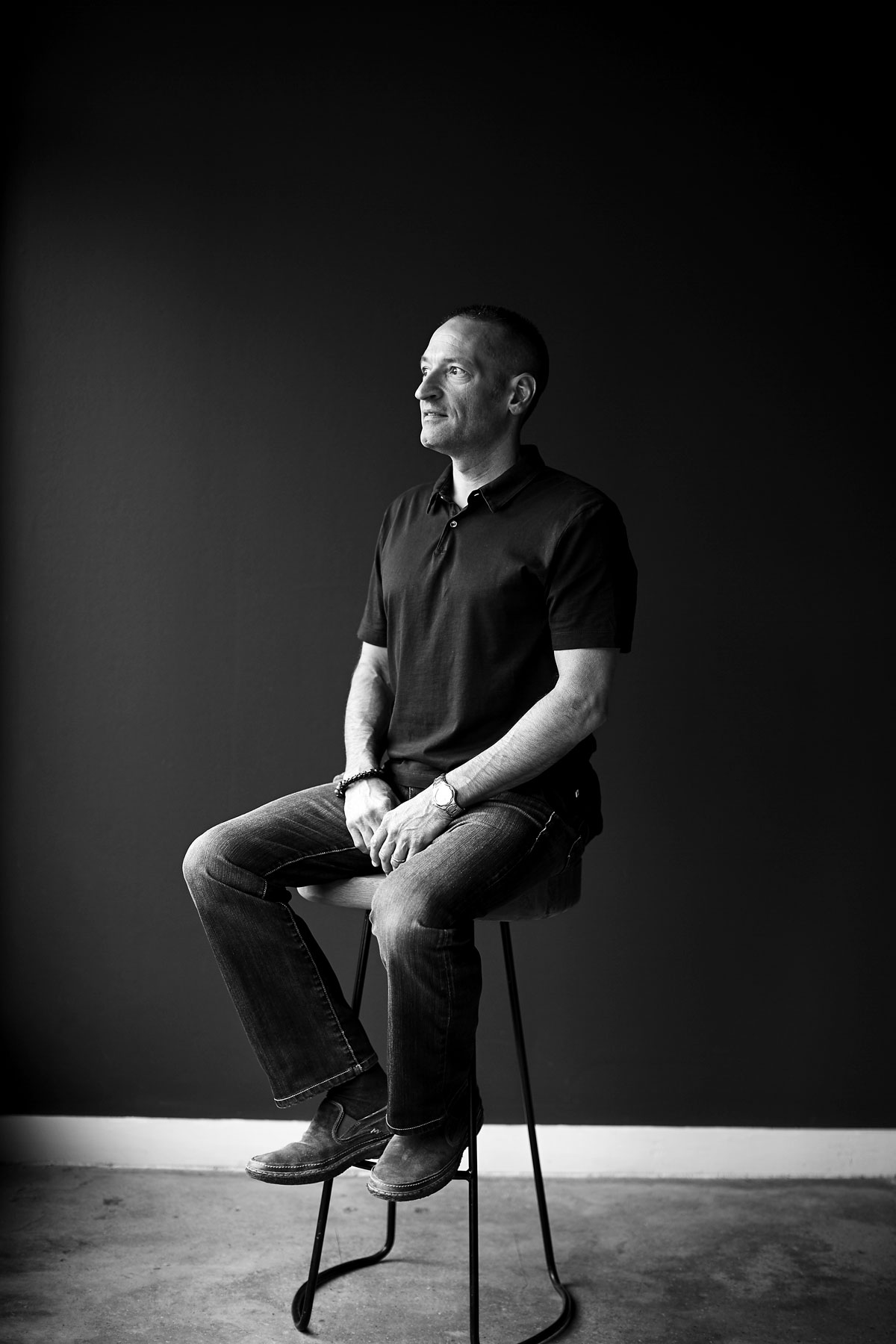 Chef and owner Randall Warder
On one visit, a side dish captured European simplicity: unity of flavor and refined technique. Asparagus spears, a poached egg, cherry tomatoes grilled to near candy sweetness—the flavors melded while remaining distinct, enhanced with a hint of truffle oil that lent depth. The dish was restrained yet complete, like the transcendence of a Margherita pizza.

You can also go classic American: a beer, burger, and fries. The list of brews is smart and well-sourced, privileging local favorites that pair well with food. My friend, a burger purist, praised the juicy patty and toasted brioche bun, the herbs and truffle salt that gave the fries zest. Sharp white cheddar played well against the savory beef. But he lamented that the burger came on a too-tiny board, no catchment for the gourmet beast’s stray sauce and accoutrements. Ingredients announced their extraneousness by falling out at first bite.

The service, too, oscillates between thoughtful and too much. Never have I had leftovers packaged with more care. Little foil cradles separated items in one case. But in their eagerness to attend and inquire, the staff has a talent for interrupting mid-sentence, mid-gesture. Was everything delicious? Were the flavors on point? I’d rather they just let us talk. On a busy night, the concrete floor does no favors. We had to screech to be heard.

This is Clark’s other face, one of distractions and simplicity derailed. The avocado toasts, for example. On slices of toasted baguette, altogether too much was going on: soft cheese, cured capicola, and grilled tomato, but also avocado purée, sharp manchego, and pepitas. Over everything, a balsamic reduction. It would have made two excellent toasts. Together, the maelstrom of flavors was like two people talking to each other in different languages: just noise. The BTC flatbread was equally busy: smoked bacon and cheddar and roasted grape tomatoes, whose juice, when they burst, mingled with the heat from sliced jalapeños. That was fine. It was the lemon aioli, in swizzles and swirls, that put things over the top. No unity here. It was carnivalesque. The piling-on problem is clear from the menu, where some descriptions read like shopping lists. The impression with these dishes is of a fussing in the kitchen that fails to bring out simple flavors.

The siren song of smoke itself was elusive. Avocado drowned rather than complemented the Chopper Salad’s assertive smoked brisket. I couldn’t get enough of the brunch menu’s grits. With their beer reduction sauce and al dente texture, they were uncommon and terrific. The accompanying smoked shrimp was underwhelming, though tender. The smoked pork rillettes were flavorful, but the texture was wrong. They stiffened quickly as they cooled, turning heavy and dense. The smoked catfish dip was the only disaster. Unfortunate and gelatinous, it was pure bottom-feeder blandness, with no discernible smoke.

But when the dessert menu comes, say yes. It’s another of those moments where the edges go soft and the world disappears. The sticky toffee pudding was a splendor, its stippled crumb springy, the crusty outside softened and lapped by a caramel sauce that was salty and decadently sweet. The rotund chocolate marshmallow cake was doused in chocolate sauce and topped with a marshmallow drift. Its crumb, like the sticky toffee pudding’s, was perfect—moist, spongy, everything a cake should be.

Also at hand after dinner is a selection of three styles of sherry and two dark, rounded ports that are refined and distinct. The Quinta Noval Black Douro port was smooth and wonderful, with notes of raisin and plum—no mustiness, no dust. They’re good enough to sip plain in lieu of dessert. A space opens up around moments like these. The world may be busy. Certain things—a fine wine, a good talk, that marvelous char—are luminous and cut through the noise.