Eric Justice is one of those frightening CrossFit people. With a white t-shirt and a gold hoop earring, the bald 47-year-old would have his Mr. Clean costume all set for Halloween. And, really, if it weren’t for CrossFit, North Dallas might never have landed the delightful new restaurant called Spork.

Justice started in the restaurant business when he was 16, washing dishes and cooking at Cyril’s Delicatessen outside of Houston. After graduating from the Texas Culinary Academy, in Austin, he went on to work all across the country, mostly for large chains, rising to vice president for Pei Wei Asian Diner and P.F. Chang’s China Bistro, doing menu development and opening stores. But about three years ago, he grew bored with it all. So Justice struck out on his own as a consultant. If you’ve been to Mexican Sugar, in Plano, or Ascension Coffee, in Dallas, you’ve seen his menus.

Hey, listen, as one dad to another: don’t skip the cocktails. The Pink Lady made me happy to let my son drive home. Good stuff.

Justice wanted a place to call his own, though. That’s what he’d ponder on the way to his CrossFit gym, near the intersection of Preston and Frankford roads. He often got stuck at that light. Waiting for green, he’d stare at an abandoned Sonic Drive-In. The empty space spoke to him. If he could only come up with the right concept.

Fifteen years earlier, when Justice opened a new restaurant for E-Brands on Knox Street called the Samba Room, he met a guy named Chris Jeffers. Jeffers was a barman. He showed promise. Justice took him around the country as he opened more Samba Rooms, and if there was a store whose operations needed adjustment, Jeffers was Justice’s man. 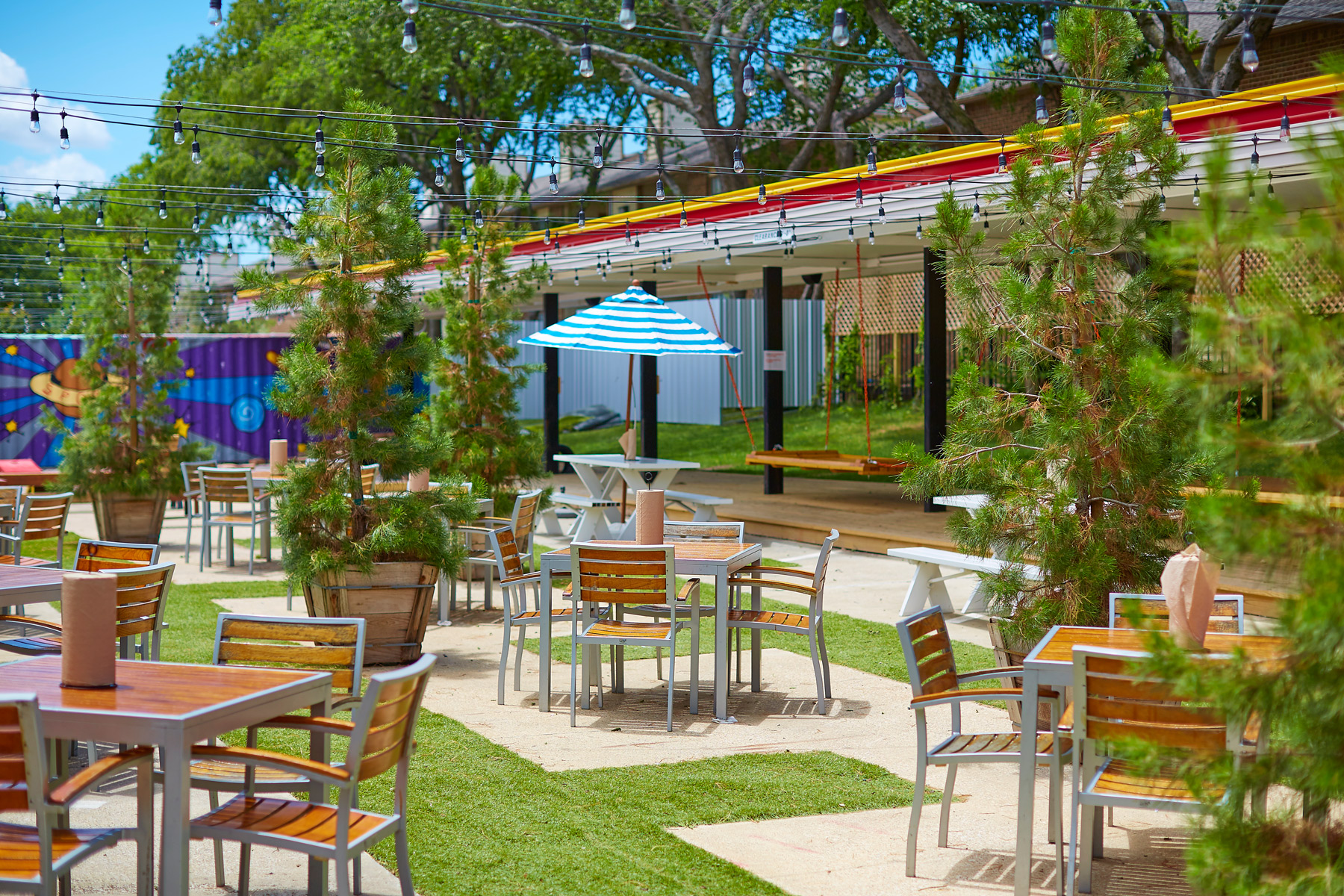 That’s the Reader’s Digest version of the story of how Justice, Jeffers, Zielke, and Byres came to hold a business meeting one day in a coffee shop next door to an old Sonic in North Dallas. In 15 minutes they had a partnership hashed out. Then they walked next door with a piece of scratch paper and sketched out their designs for a new restaurant in the Sonic’s shell. The whole process lasted about an hour. You could say that Spork took decades to develop—and then happened all at once.

On the first night I visited, I brought my 16-year-old son and 9-year-old daughter. Spork is a kid-friendly joint, and I wanted their take. If there’s such as thing as a breastaurant (I’m told there is), then this is a bratsaurant—leaning in to the most endearing sense of the word “brats.” There’s a smallish indoor dining room with televisions hung overhead and retro red chairs clustered around wooden four-tops. White high chairs at the bar sit under hovering lights that evoke spaceships. It’s inviting. But the spacious patio, beyond glass garage doors, is where the action is at. 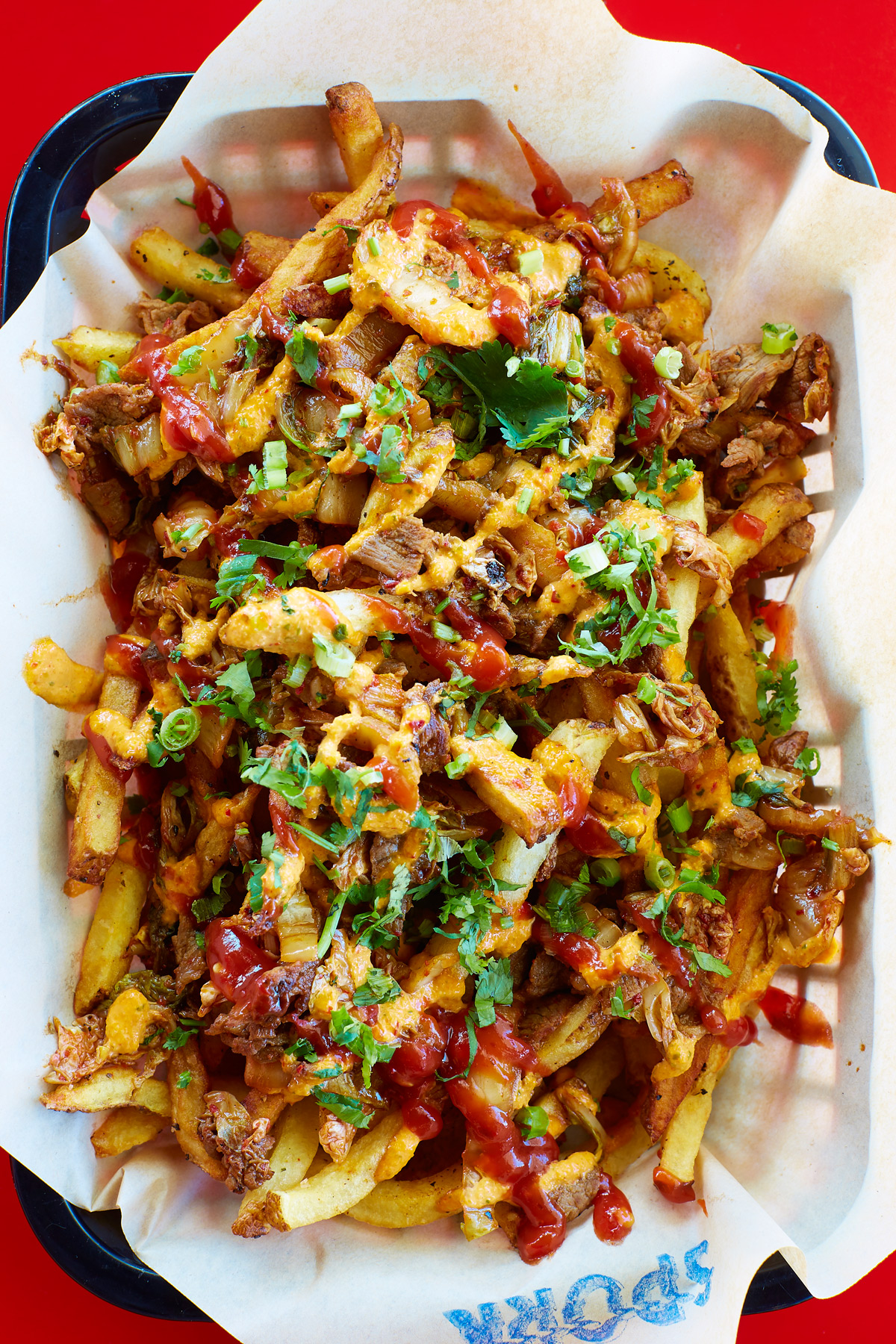 Kimchi Fries Photography by Kevin Marple
Photography by Kevin Marple
A wood deck gives way to the concrete of the original Sonic parking lot. The white stripes of those parking spots still peek out from under the wood deck. Now tables sit where cars once idled. Through the middle of the lot runs a rectilinear strip of AstroTurf. Standard four-tops and white picnic tables are offered relief by the faux grass and strategically placed potted conifers. At dusk, strings of white festival lights crisscrossing the space spark to life.

Listening to the Flaming Lips’ “Turn It On,” I watched young dads in flip-flops play cornhole, pints of Peticolas’ Velvet Hammer in one hand as they sent their beanbags sailing with the other. I am guessing, obviously, about the terroir of their suds. (Spork offers a tightly edited but wide-ranging selection of beer that includes the previously mentioned local Hammer on tap; a Conroe, Texas-made Southern Star Buried Hatchet in can; and a Wisconsin-made Mickey’s malt liquor in bottle. But the dads were clearly dads. I could see it in their eyes, happy to have their kids occupied on adjacent cornhole courts, playing on a comically long 10-man foosball table, or else awaiting their turn at a game of super-size Jenga.

Hey, listen, as one dad to another: don’t skip the cocktails. The Pink Lady (gin, applejack, lemon, grenadine, egg white), the Rusty Tango (Cazadores tequila, lime, agave, Cointreau, red sangria), and a few others I tried in the course of performing my duties over several visits all made me happy to let my son drive home. Good stuff.

Food, yes. Please start with the bulgogi kimchi fries, an appetizer that feels like a Pei Wei hangover cure for Justice. Though he doesn’t allow his kimchi to ferment underground for months, in the traditional fashion, he can be forgiven. It’s irresistible, salty and sour and sweet and impossible for this dad to quit. The kimchi and nearly everything else are made in-house—the Korean pickle and sesame bean sprouts on the Niman beef dog, the Japanese red chile mayo and the nine other burger sauces from which one can choose. Those burgers are a blend of chuck, brisket, and skirt that Justice grinds himself. Only Empire’s brioche buns, delivered seven days a week, are someone else’s doing.

You’ll be happier if you avoid the pork carnitas sandwich, which came to my table as a stringy, dry mess, perhaps because an effort had been made to turn pulled pork into a patty, which is a thing that shouldn’t happen. Too, my son wasn’t pleased with the overly salty pretzel-crusted chicken tenders. The straight-up version, ordered on a subsequent visit, was no doubt the way to go.

A final suggestion? After you’ve chosen a main (e.g., beef or buffalo burger, grilled cheese, Gulf catch), a sauce (jalapeño blue cheese, tamarind ketchup), and a cheese (Herkimer white, Humboldt Fog, Emmi Gruyere), you’ll have the option of adding an extra, one of which is a crispy fried egg. Do this. It is a soft-boiled egg that has been cooled, peeled, and fried with Japanese breadcrumbs. There’s a gent who regularly dines at Spork and orders nothing but six of these as a meal. He is a genius.

Be patient during peak hours. The comfortable price points at Spork don’t draw professional, life-long servers. On my visits, that sometimes meant waiting a bit for a drink refill or a dessert order taken. But those waiters are, in some cases, neighborhood kids who are learning their first jobs. It’s easy to overlook sluggish (but cheerful) service when the guy or girl schlepping the Gulf shrimp ceviche is your neighbor.

Those neighbors are lucky to have Spork in the hood. It’s as if someone took a tiny piece of funky Oak Cliff and dropped it in staid North Dallas—which, come to think of it, is pretty much what happened. It’s Chicken Scratch with better parking. (And, yes, I’m aware that Chicken Scratch isn’t in Oak Cliff.) If you live within a 15-minute drive of Spork, there is no reason it shouldn’t be in your regular rotation, especially if you’re any good at cornhole.

If you don’t live near Spork, just wait. The Three Kings and Justice, they have an idea. Spork isn’t just a repurposed Sonic. It’s not even 10 such Sonics brought back to life. That would be too easy for the chain builder and his partners. They envision, perhaps, a second-generation Taco Bell serving Spork Mexican. Jeffers says his white whale would be a Spork seafood in an old Long John Silver’s with a shipwreck entrance. If they hand out paper pirate hats, I’m in.