Jon Stevens smiles as he stands in front of the exhibition kitchen of his new restaurant, Stock & Barrel. He’s dressed in faded jeans and a grayish-blue shirt, and his salt-and-pepper hair is cut short. From afar, he appears to be just another boyish fortysomething customer waiting for a place to sit, someone lured here by the restaurant’s “Kitchen Americana” cuisine, which features fancy meat-and-potatoes dishes alongside a few unusual appetizers, sides, and desserts. 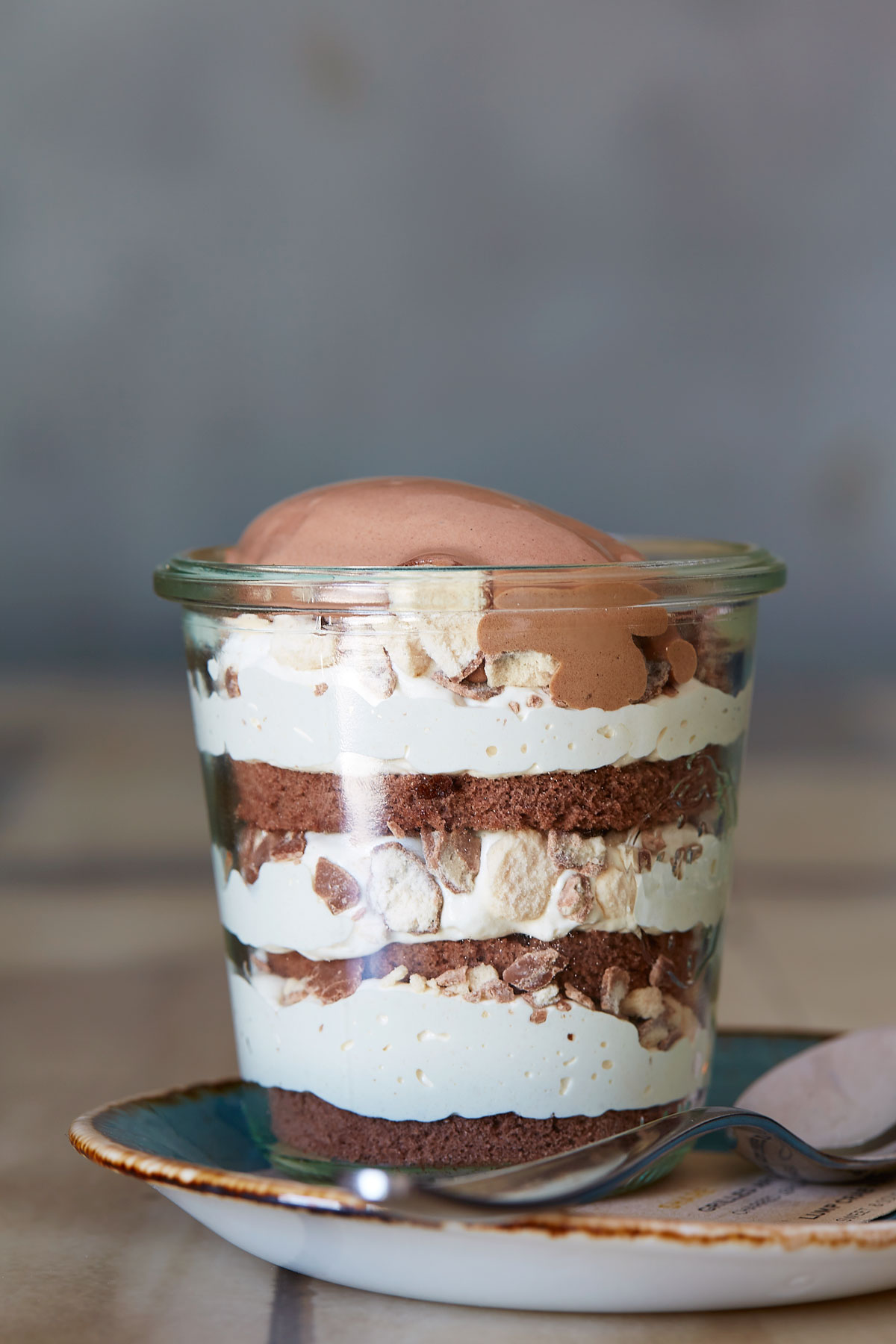 Chocolate trifle
But Stevens’ cover is blown as patrons make their way across the dining room’s 2,800 square feet to greet him. He has made many friends—and fans—since moving from San Francisco to Dallas in 2000. His first job here was as chef de cuisine at The Mercury. After three years, he joined Avner Samuel in the kitchen of Aurora, one of the finest dining destinations in Dallas. When the economy tanked, Samuel closed Aurora, and Stevens moved back to California for two years. He returned in 2007 and cooked at Mignon and Neighborhood Services before he reunited with Samuel to open Nosh Euro Bistro.

Now that Stock & Barrel is up and running, Stevens has reason to smile. Reservations for a table in the industrial-chic, concrete-and-wood dining room aren’t easy to obtain during peak hours. Luckily, they built a huge bar where the post-work cocktail crowd blends with those waiting for a table. The bartender recommended a drink made with one of their infused spirits. I chose the Obligation, a mandarin orange-infused vodka shaken with St. Germain liqueur, lemon juice, and honey, and poured with Prosecco into a long-stemmed coupe. The concoction was refreshing without being overly sweet, a dangerous quality when consumed on a hot summer night. 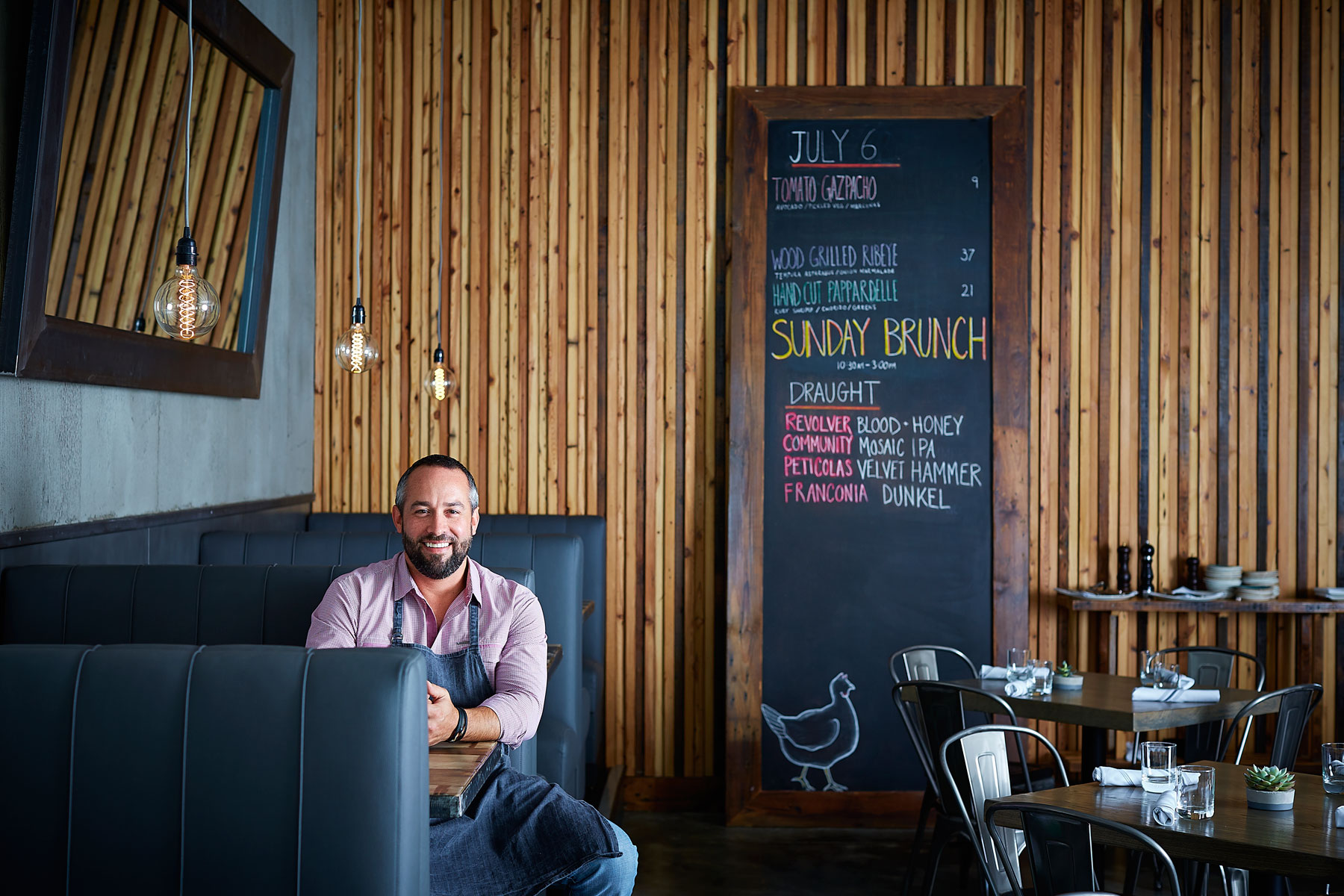 The first time I visited Stock & Barrel, my friends and I were swept away by the energy and the menu. “Look at all of the vegetarian options,” one said, as she read from a list that included foraged mushrooms, grilled asparagus, and roasted Brussels sprouts. “I could eat everything on this menu,” another exclaimed. By the third time I’d paid a bill at Stock & Barrel, I’d tried almost everything on the menu and was ready to move on to another taste profile.

“Please, whatever you do, save room for dessert,” our waiter said. “Our bread pudding is better than God.”

Many of the major ingredients are repeated in sections of the menu, and the majority of the selections are heavy, almost wintery offerings. Deliciously tender pork cheeks braised in Dr Pepper and red wine are served with hearty, cheesy grits. As soon as the thermometer drops below 40 degrees, I will head back for the comfort of this dish. Until then, I recommend you pay attention to the specials, especially those featuring seafood.

Or you could build a meal out of lighter appetizers and shared plates. I could have eaten 10 pieces of toast slathered with a mixture of puréed fava beans and mascarpone cheese, covered with thin slices of speck ham, and decorated with drops of an almost sweet balsamic reduction and a hint of citrus. If the gazpacho soup is available, snag a bowl. The velvety blend of cherry tomatoes is poured over gypsy peppers and avocado, with crunch from Marcona almonds. Our server demanded we try the grilled artichoke served with what the menu billed as a “charred lemon mayonnaise.” Minutes later, three small artichoke halves sprinkled with plump flakes of fresh Parmesan arrived. A pinch of sea salt helped bring out some flavor, but a jazzier, perhaps smokier dip would elevate the experience.

Brussels sprouts make several appearances on the menu. One version is simply roasted with scallions and sweet chilies. Another is a spectacular salad of shaved sprouts and stalks tossed in pine nut vinaigrette with plump, sweet currants, bacon, and goat cheese. Potatoes get their own section. “Consider these for noshing while looking over the menu with a cocktail,” our waiter said. Neither the house-made potato chips smothered with blue cheese, bacon, and scallions nor the “classic Russets” (fries!) with white truffle mayonnaise were meant to be enjoyed with a mandarin orange-infused cocktail.

Instead, snack on golf-ball-size goat cheese dumplings surrounded by hen-of-the-woods mushrooms and braised greens. Skip the ceviche. Whatever minced octopus there was in the bowl was masked by too much fresh mint, parsley, and grape halves. I couldn’t see the octopus, but I knew it was there because occasionally my teeth hit something rubbery. 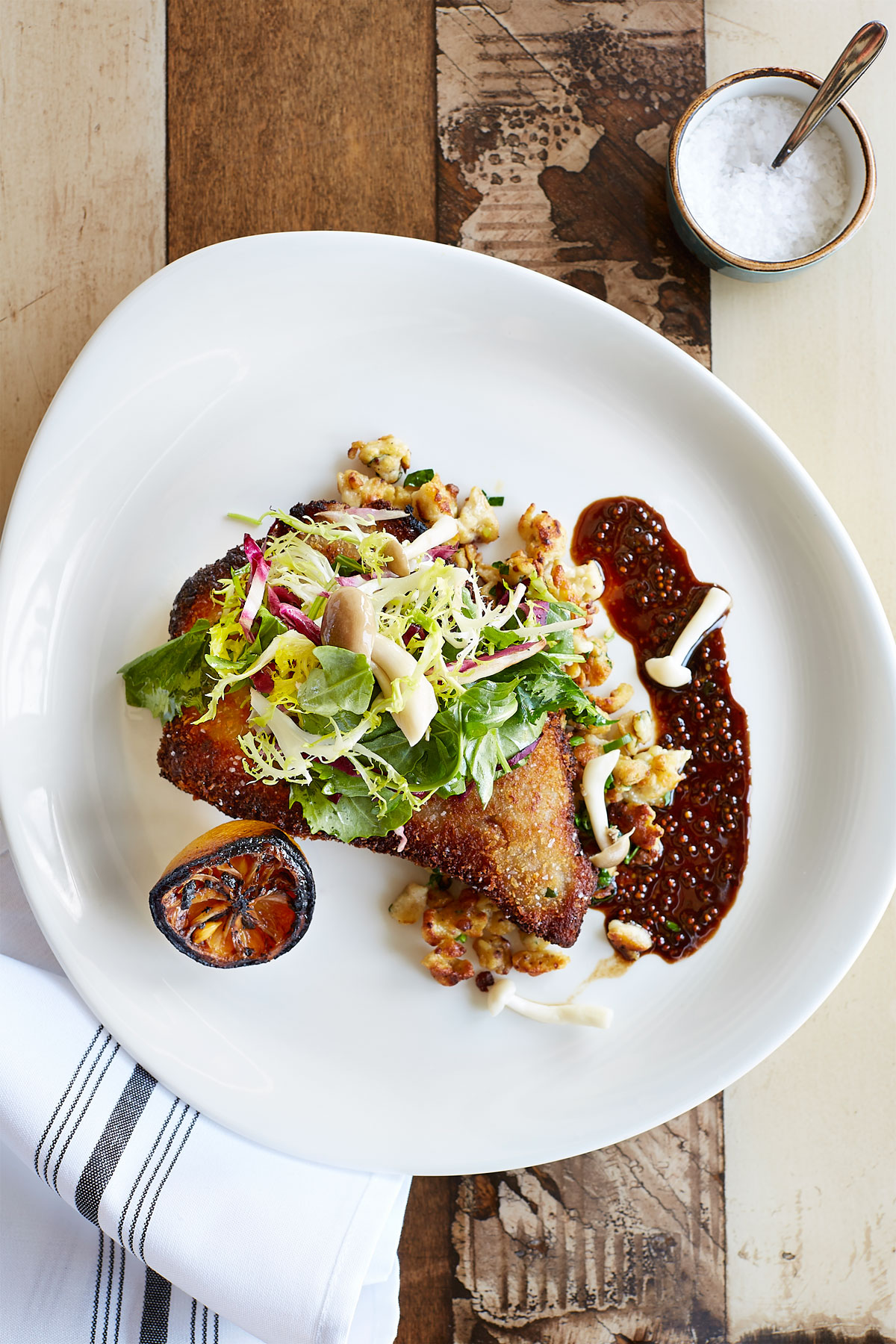 Pork schnitzel with spaetzle, pickled mushrooms, arugula, and mustard jus
Three two-bite scallops ($28) were nicely cooked but seemed out of season when paired with a thick, creamy cauliflower sauce. The recommended meatloaf—two discs of ground wagyu beef mixed with breadcrumbs and cream—was severely overcooked and dry. The inspiration of surrounding the meat with an elegant peppercorn sauce is lovely, but the night I tried it, the dish was a failure. It was pushed aside to make room for a brilliant bronzini cooked on the grill, bathed in tarragon butter, and served with fennel, tomatoes, and zucchini.

Someone has invested a lot of time and money into building this restaurant, but he didn’t put much effort into creating an enthusiastic wine list. Like the menu, it is comfortable and unpretentious. The selections cover the basic varietals with widely recognized retail names such as Butternut Chardonnay and Owen Roe “Sharecroppers” Cabernet, but there’s no spark. Educated and adventurous eaters will be disappointed. 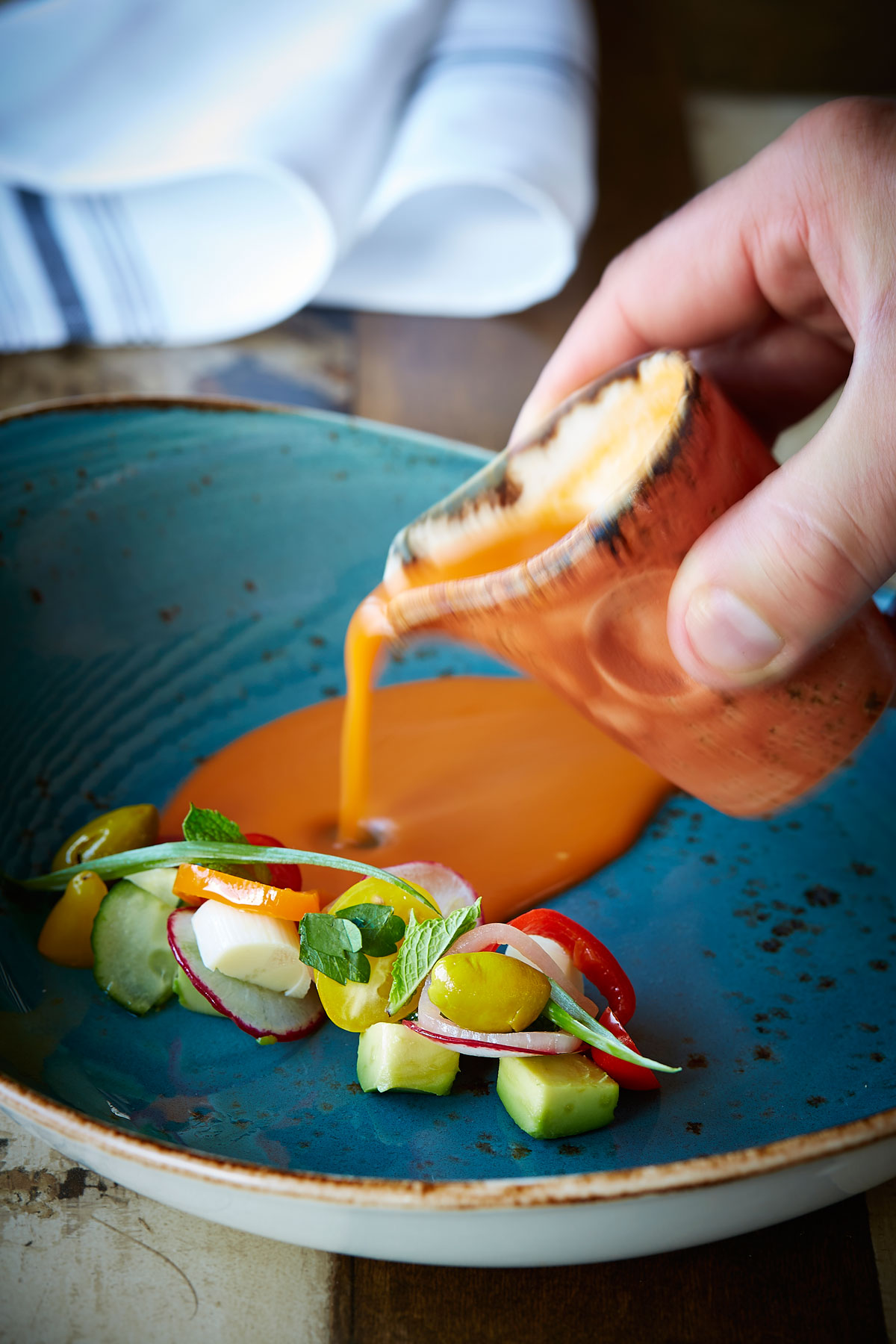 Tomato gazpacho
I can’t speak to the overall quality of service at Stock & Barrel, as I was served by the same person three times. He was smart, swift when he needed to be, and familiar with the menu. The first time I listened to his well-rehearsed spiel, I was impressed. As he began his third recital, I mouthed along with him. He threw me off my mark, however, when he got around to describing dessert. “Please, whatever you do, save room for dessert,” he said. “Our bread pudding is better than God.”

I’m not quite sure how the bread pudding rose from a mere mention to godly status, but I’m here to tell you his assessment is only a slight exaggeration. Instead of using leftover bread, they break up fresh croissants, bake them in cream, and cover it all with crushed English toffee. A scoop of house-made salty caramel ice cream melts down the sides and onto the plate decorated with little circles of warm toffee. Unlike most bread pudding, the pockets of air in the croissants keep this heavenly version light. The pudding dissolves in your mouth and doesn’t hit your stomach like a sack of cement. Other parts of Stevens’ menu might need some fine-tuning. But he better keep his hands off this.