Looking at herself in the tall, wide bridal-shop mirror, Amanda Barbour couldn’t help but smile. This was what she’d dreamed of. The big, bright satin dress. The flowers. The beautiful church wedding. She was 36, and for years, she’d imagined herself marrying a pastor and helping people with her story of redemption. Now it was all so close.

The ceremony was just three weeks away, and this was her last chance to make any significant alterations. She admired her dress, running her hands across the embroidery, the pearls, the beaded florets. She practiced walking, then sitting, with the long lacy train. As the seamstress marked small changes and explained how to fasten the bustle, Amanda’s face beamed.

She was excited for her dad to see the dress. She imagined walking down the aisle with him. She pictured the father-daughter dance they’d share. She’d always felt so close to him. Even when the rest of the world seemed so hard, he could make her feel like a princess.

Standing there in that dress shop in Deep Ellum, she felt lucky to have been given a second chance, a resurrection of sorts. She thought about the long, strange journey that had brought her to this point. She was finally content. And she wanted her father to be proud.

Be confident of this, that he who began a good work in you will carry it on to completion until the day of Jesus Christ.

Both of Amanda’s parents come from dysfunctional homes. They did their best with Amanda and her siblings, but there was a lot of chaos in the house. Her older sister was beautiful and popular. She and her older brother had a tumultuous relationship. Amanda was in the background, quiet and sensitive.

She felt like the only one who understood her was her father. He was the constant, the rock of stability. On weekends, they’d have daddy-daughter time, when they’d go for walks or he’d paint her toenails. He worked in the finance department of a car dealership, and when he worked late, Amanda refused to go to bed until he got home. He’d pick her up and carry her into the bedroom. He’d tuck her in and remind her that she was loved.

They lived in a small town in Ohio, where she went to Catholic school. She got good grades, but she wasn’t great at making friends. Her family was Catholic but didn’t go to church much. Except Amanda. She’d often ride her bike to Mass on Sundays alone. She liked church. The quietude, the ritual, the liturgy. She found it comforting.

As a teenager, she also learned that people liked hearing her sing. Amanda had a cousin who was an opera performer, and that appealed to her. So she went away to college and majored in vocal performance. It was a chance to escape some of what she’d later call “the craziness at home.” She liked being away so much that the summer after her freshman year, she signed up for a choir tour that would take her all across the country.

After her sophomore year, in the summer of 1998, she took a job working at an amusement park in Sandusky, on the shores of Lake Erie.  One night she went out with a co-worker, then back to his place, where he forced himself on her. She didn’t tell anyone and for weeks walked around in a daze. People noticed the change in her demeanor.

Finally, one of her roommates, a woman named Shannon, came to her demanding to know what was wrong, what was making her so distant. Amanda explained that she’d been raped, and Shannon put her arms around her.

She begged Amanda to file a police report. Amanda didn’t. She felt guilty, somehow responsible. But Shannon didn’t blame her. She made her feel better. She helped her realize this wasn’t her fault.

The rest of that summer, the two of them would stay up late talking. Amanda would wait for Shannon to get off work, and they would go for walks. They talked about their families and their childhoods. About music and life. They’d smoke cigarettes in the sand and watch the sun come up over the lake. In the afternoon, the park was dense with mobs of humanity. But in the early morning, as the soft light broke through the darkness, there was peace.

At some point, Shannon came out to her. It didn’t seem like anything changed when Amanda learned her friend was attracted to women. It’s not like Shannon was hitting on her. And after the assault, the last thing Amanda wanted was to be intimate with someone. Their relationship just wasn’t romantic.

It happened at a Sarah McLachlan concert, during the song “Adia.” It was August, and the summer was almost over. They’d been together all day, smiling, laughing. It felt like something was building. There was nervous excitement. In that moment, during that song, everything seemed so right. Amanda felt so free. She leaned in and kissed her friend.

She could feel the blood rushing to her face. She could feel her stomach flutter. As their lips connected, she thought: Oh my God. Oh my God. I can’t believe I’m doing this. She’d never really thought about it much before, but she wondered now if maybe she was a lesbian, too.

The relationship continued into the fall, when they went back to school. They ate together, studied together, sang in the choir together, spent every weekend together. For the first time in her life, Amanda was in love. That’s when she decided to tell her parents.

In the two years Amanda had been away from home, her brother, then in the Army, developed a drug problem. When he got out of the Army, he dedicated his life to Jesus, and he stopped using. Seeing the power of Christ—and wanting to be supportive of their newly sober son—Amanda’s parents started going to a new church. They went every Sunday and spent time reading the Bible. While Amanda was falling in love with a woman, her parents were becoming dedicated Evangelicals. 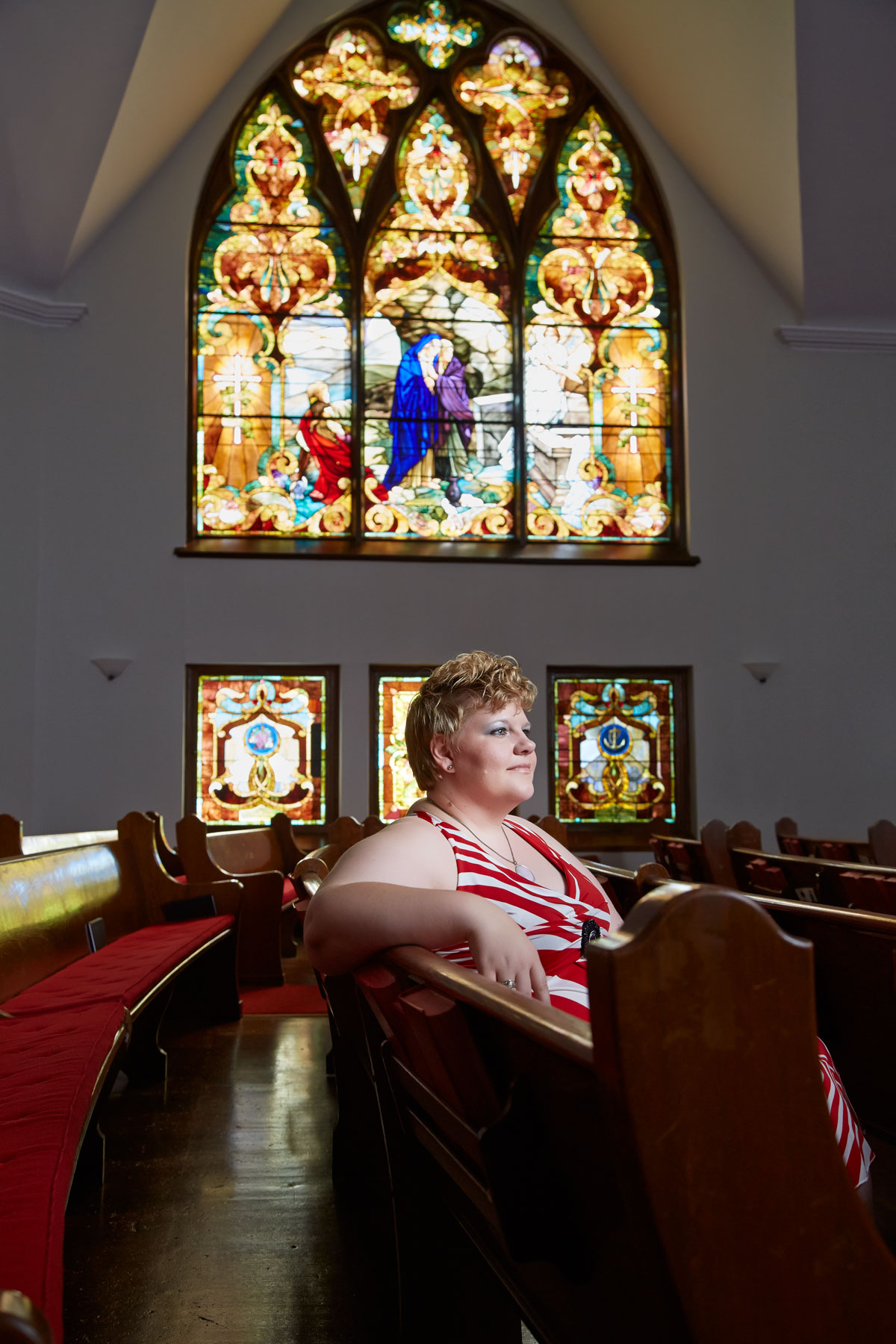 FAITH HEALING: In conversion therapy, Amanda Barbour believed if she prayed enough and followed all the rules, God would reward her with the life she so desperately wanted. Photography by Billy Surface
Photography by Billy Surface
She left school on a Friday and drove three and a half hours home. As she got closer, as she anticipated what she’d say, Amanda could feel her heart beating inside of her chest. She took a deep breath at the front door and walked in. Her father was sitting, reading. Her mother had been taking some college classes and was studying Bram Stoker’s Dracula at the dining room table. And before anyone could even say hello, Amanda blurted it out.

She’d remember looking at her father—her sensitive, gentle father, who’d always been there for her. He looked at her with so much love in his eyes. But he didn’t understand. His little girl. His princess. All the things he had planned for her. And all those things he’d heard in church about homosexuals. She’d remember him sitting there, confused and crying. He seemed so disappointed.

They wanted to know who had done this to her. They implored her to leave Shannon, to never see her again.

Amanda drove back to school. She didn’t know what to think. By turns she was hurt, then angry, then paralyzed by despair. Sometimes she felt naïve for thinking it might have gone well. She felt dread, wondering if she’d ever see her parents again. It weighed on her, and she didn’t speak to them for weeks. As mad as she was, though, she still missed them. She ached for their love and support. She just wanted things to go back to the way they were before.

Then one day her mother called to tell Amanda that if her father didn’t stop crying, she was going to divorce him. So Amanda drove home again to spend the weekend with her dad. She wanted to reconnect. She wanted to make things right.

Her father took her to meet their pastor. Amanda, headstrong 20-year-old that she was, wore her black leather jacket with all the zippers and didn’t take it off the whole time.

“I understand that you think that,” the pastor said. “But let’s just talk. Let’s talk about how you got into the situation. Let me get to know you.”

Amanda went back to school and told Shannon that she couldn’t see her anymore. It was agonizing. Shannon cried so violently that she began to retch. Still, Amanda was firm.

Amanda felt empty. Without Shannon, she felt like she’d never be strong again. For weeks, she subsisted on coffee and cigarettes. And when the semester was over, she left school and moved back in with her parents.

To them, this wasn’t too different from her brother’s addiction. They encouraged Amanda to meet with their church’s pastor again. The pastor introduced her to a local Exodus group, which taught that homosexuality is a sin and preached that with conversion therapy—also called “reparative therapy”—God can change your sexual orientation.

She’d remember looking at her father—her sensitive, gentle father, who’d always been there for her. He looked at her with so much love in his eyes. But he didn’t understand.

Her first group was small, just Amanda and two mothers looking for help with their gay sons. She didn’t feel comfortable, but now that she told people she wasn’t gay anymore, her family seemed to get along a lot better. Her mother started telling her aunts and uncles the story of how Amanda had “escaped that lifestyle.”

She went to a national Exodus conference in Chicago and met other people struggling with the same issues. She found an online forum where she could connect with young people who understood what she was going through. Participants weren’t allowed to share last names or email addresses, for fear that a relationship might turn inappropriate. But Amanda would stay up all night writing there, explaining the power God had displayed in her own family. She’d write about her battles with same-sex attraction, about sermons she thought were helpful, about Scriptures she found inspiring. To someone new, she’d close her message with:

“Be confident of this, that he who began a good work in you will carry it on to completion until the day of Jesus Christ. Philippians 1:6.”

Once in a while, when nobody was around, she’d call Shannon and sit silently on the phone—before the days of caller ID—just to hear her voice. Sometimes she’d call and hold the receiver up to a speaker and play Sarah McLachlan. For the most part, though, she bought into conversion therapy. Homosexuality had almost broken up her family. She knew something had to change.

She hoped that if she prayed enough, God would reward her and heal the broken things inside of her. She was told she had something called “arrested psychosexual development.” She heard experts point to her parents, suggesting she hadn’t had the right bonding structure with her mother. Amanda knew she’d always felt closer to her dad.

Plus, it was pointed out to her that her first lesbian experience came not long after being raped, proof of a trauma that needed healing. It all seemed so logical. The way she understood it, if she could connect with the woman God wanted her to be, then she could assimilate, she could fit in the way she was supposed to. She just needed to fix what was broken. She needed to be repaired.

PEOPLE ARE TELLING US…