John Tesar grew up roaming the beaches of Long Island. When the waves were cranking, he’d grab his custom Swallow Tail Thruster and spend the day surfing off Jetty 4. He hung out with fishermen, and his mother cooked a lot of seafood. His nickname was The Fish.

Tesar parlayed his knowledge of preparing swimming things into Spoon, a bitchin’ seafood restaurant in Preston Center. How does a guy called The Fish with an award-winning seafood restaurant end up as the chef at Knife, the trendiest steakhouse in Dallas? “It took practice,” Tesar says. “A lot of practice.”

Management at the Hotel Palomar, now the Highland Dallas Hotel, tossed Tesar an offer he couldn’t refuse. “They said, ‘Here’s a million dollars to build a steakhouse and renovate the lobby and the restaurant,’ ” Tesar says. “If I make it work, I’m a hero. If not, I’ll get thrown out.”

Tesar traveled across the country and studied traditional chop houses and modern restaurants experimenting with alternative cuts of beef. His brief consultation on the menu at Dallas Chop House helped. He gained some knowledge on the peculiarities of dry-aging meat, but at Knife Tesar wanted to take his meat to the max. His goal was to serve a 240-day dry-aged steak. 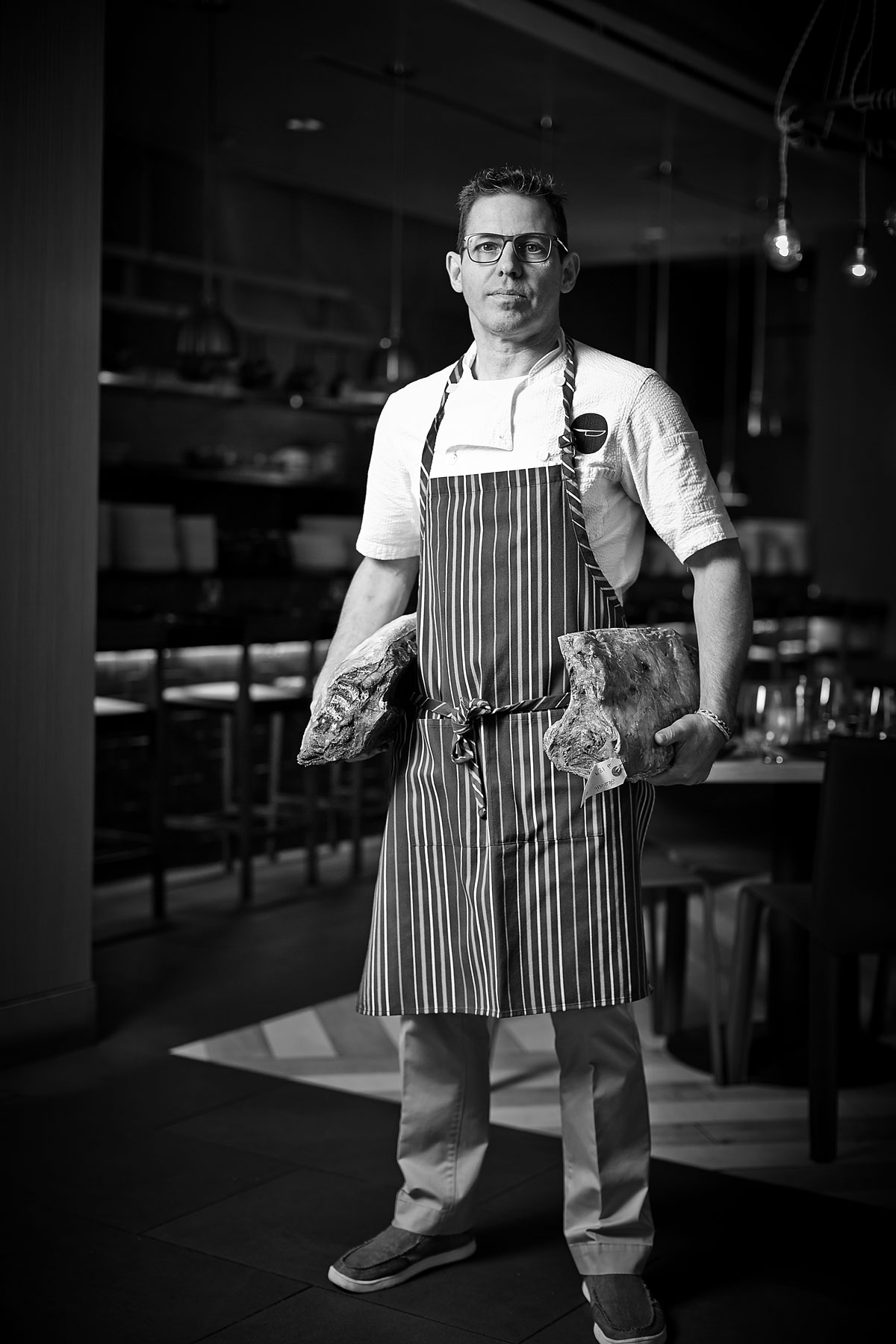 His ambitious menu—with prices that range from $12 for a cheeseburger to a $95 steak—divides the meat into three categories: “new school,” “old school,” and “exotic.” New-school cuts include not-your-usual-upscale-steakhouse fare such as sirloin flap, tri-tip, flat iron, and culotte. These less tender meats are done sous vide, vacuum-bagged and slow-cooked in a water bath to break down the tissue before they are grilled over red oak.

I love the idea of adding less glamorous steaks prepared with a chef’s sensibility alongside the usual high-priced Prime suspects. The effort offers customers a $25 option. Of the three I tried—sirloin flap, culotte, and flat iron—only the culotte, also referred to as a cap steak, stood out. Tesar confesses he’s still tinkering with the sous-vide temperatures and cooking times. If he gets this figured out, these steaks will make dining at Knife an even more affordable adventure.

The majority of familiar steaks—filet, sirloin, bone-in rib-eye—are listed under “old school.” Most of them are dry-aged in Tesar’s meat locker, located just inside the front door. At any given time, it houses about $30,000 worth of aging beef.

The “exotics” section includes slow-roasted bison rib-eye, a 32-ounce Akaushi rib-eye, and the aforementioned 240-day dry-aged rib-eye for $80 an inch. These are cooked in a traditional steak broiler. Tesar is still trying to get the hang of rotating the meat aging in the locker, so many of the dry-aged steaks, including the 240-day, were not available when I visited. Pay no attention to the $95 price tag of the Akaushi rib-eye. The tender Kobe-style beef is pre-sliced and arranged around the bone and is more than enough for two. The silky smooth meat, seasoned simply with salt and pepper, melts like butter on the tongue.

At Knife, Tesar wanted to take his meat to the max. His goal was to serve a 240-day dry-aged steak.

Sourcing a consistent product has been one of Tesar’s highest hurdles. He uses Niman Ranch beef from Montana and 44 Farms, a working ranch in Cameron, Texas, where, Tesar says, the grass-fed Black Angus bulls are “raised like racehorses.” The Akaushi comes from HeartBrand in Flatonia, Texas.

If these choices don’t satisfy your carnivorous cravings, Tesar offers “slabs” and “slices”: a 21-day brined pork belly, a crispy pig’s head, a charcuterie plate, a bacon tasting, and a ham tasting. The bacon tasting turned into a feisty board game. A large butcher block lined with five generous slices of glistening, crisp bacon sat before us. From left to right, the contestants were North Country cob smoked from New Hampshire, Moody’s lightly smoked from Massachusetts, Nueske’s applewood smoked, Nueske’s cherrywood smoked (both from Tennessee), and a slice of Spain in the form of Ibérico bacon. We closed our eyes and sampled each one. The winner, and my newest obsession: Ibérico bacon.

Tesar also brings back some of his greatest hits. Groupies will recognize the burgers, avocado fries, and Johnny’s Mac & Cheese from The Commissary. I thought I’d never order mac and cheese again in my life, but his blend of Vermont white cheddar, New York sharp cheddar, and Parmesan cheeses mixed with cream and a touch of nutmeg is not a homey concoction of globby melted cheese; it is refined. There’s also a sprinkling of Spoon-esque items, such as tuna tartare, pepper-crusted blue-fin tuna, and a 2-pound poached lobster. The high-style desserts at Knife are created by Spoon pastry chef David Collier. I recognized the magnificent oxtail ravioli from Tesar’s menu at the Rosewood Mansion on Turtle Creek. I would go back just for this dish. 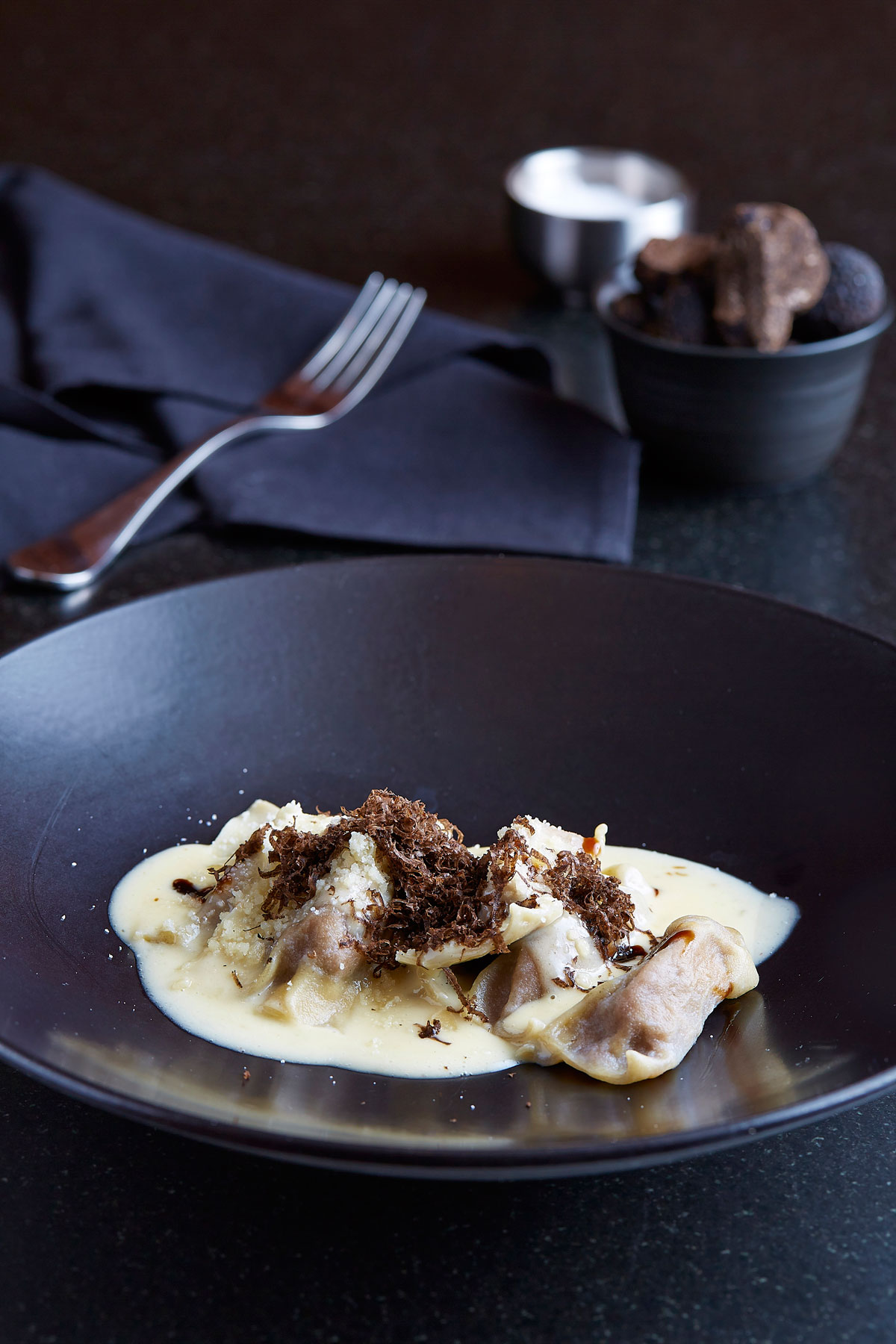 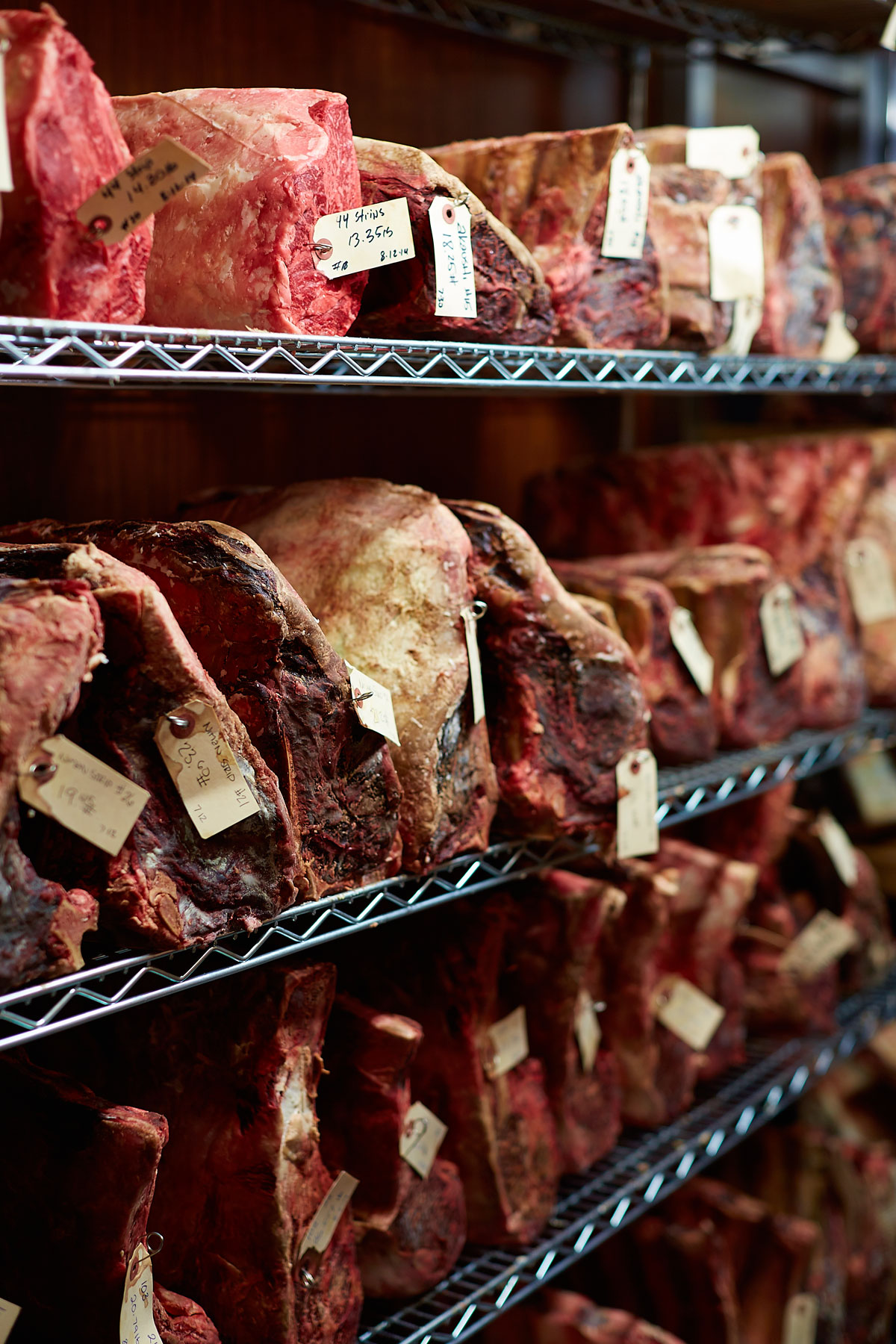 But Knife would be a nifty concept even without any nods to Tesar’s former kitchens. The interior, finished out in warm wood tones, is clubby and inviting. The exhibition kitchen is framed by dark, kelly green subway tiles. It’s easy to settle in for a long, relaxing meal, which should start with one of the splendid cocktails designed by mixologist Michael Martensen.

A long meal may not always be your choice. Tesar has done his homework and graduated with honors, but the staff needs to go back to Service 101. I experienced botched orders, staggered delivery of entrées, and plates slung on the table Denny’s-style. One waiter described Collier’s Peach Five Ways dessert as “peach ice cream, peach cake, and three other ways.” He left the table before I could speak.

On another visit, I ate in the bar. The space, just outside the dining room, was a buzzy scene of hotel patrons and a few well-known locals, including a TV anchor. My dining companion and I ordered a glass of Sancerre and a glass of Rosé. Both were presented to us at room temperature. When we told the waitress, she said, “Yeah, we didn’t have any chilled yet.” She offered us ice. Instead, we plunged the small carafes of wine into a bucket of icy water and ordered appetizers.

Sommelier Sabrina Snodderley’s wine list, delivered on an iPad, is ample and includes sophisticated Old World and New World wines. I have asked for Snodderley’s advice when she was at Spoon and again when she worked at Gemma. I was never impressed with her suggestions or her energy level. The one time I managed to snag her attention at Knife, I asked her to suggest a French wine under $100 that she might consider unique. She flipped around the iPad, which drives me nuts because it’s impossible to compare different bottles side by side. Without asking me to refine my question and with all the charm of a schoolmarm, she suggested a 2007 Château Hortevie red Bordeaux ($68), a medium-body blend produced in the Saint-Julien appellation in France. 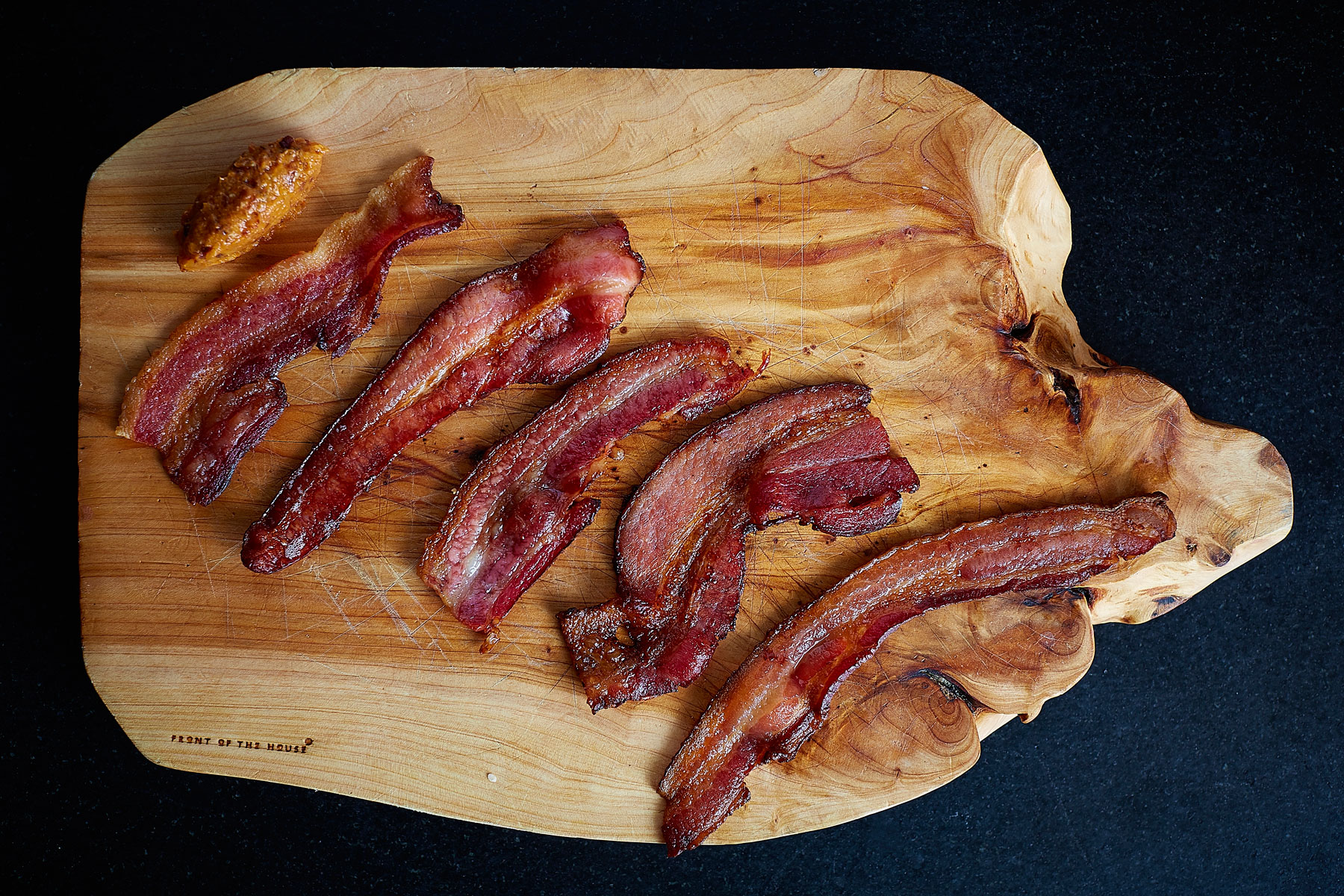 If you can overlook the service gaffes, you will have a fun, fulfilling, and certainly filling meal. Tesar’s side dishes are splendid. One evening, pea tendrils sautéed in oil were offered as a special. Seasoned with sea salt, the tender greens were a slightly sweet, yet peppery, almost bitter delight.

Pea shoots star in a sassy salad mixed with slices of salty country ham and a dollop of cold pea sorbet tossed ever-so-lightly in Green Goddess dressing. Another salad spotlights heirloom tomatoes grown by Kent Pirkle, a farmer in South Texas. Round slices of yellow and red tomatoes are decorated with cubes of compressed watermelon. Both are gently touched with sea salt, rice wine vinegar, and Spanish olive oil powder. Tesar dresses a vegan-friendly tangle of watercress and toasted walnuts “as little as humanly possible” with a blend of Sherry vinegar, olive oil, and warm shallots.

But of course, it still comes down to the steak. After dining at Knife, I called Tesar to ask if he’d made any changes. “I’ve found that dry-aging the better cuts of beef between 45 and 60 days makes them fantastic,” he said. “But after 60 days, the ends are dried and there is no blood and it eats dry. It’s like wine. You have to lay it down until at least 180 days to get the concentration. At 240 days, it’s sweet, with the tastes of popcorn, blue cheese, and truffles.”

That’s some crazy meat jive from a surfer dude called The Fish.