This is a mum: a maternal figure.

This is a mum: a widely grown flower with close-clustered petals.

This is a mum: carefully constructed layers of craft material given to a girl by a boy on the occasion of a high school homecoming football game, in Texas. Varying lengths, colors, and thicknesses of ribbon—fat, thin, curling, wire—are sandwiched and stapled in an inverted fan between circles of white cardboard. Two names are spelled out vertically down one of these ribbons, in sparkly stick-on letters. A fake mum flower is attached. A bear (it’s usually a bear) is nestled into its off-white petals. There’s a rope that loops around the owner’s neck, so as to distribute the weight more evenly. (This idea has saved many a dress from the stick of safety pins.) There’s a cowbell. Plastic trinkets. LEDs. 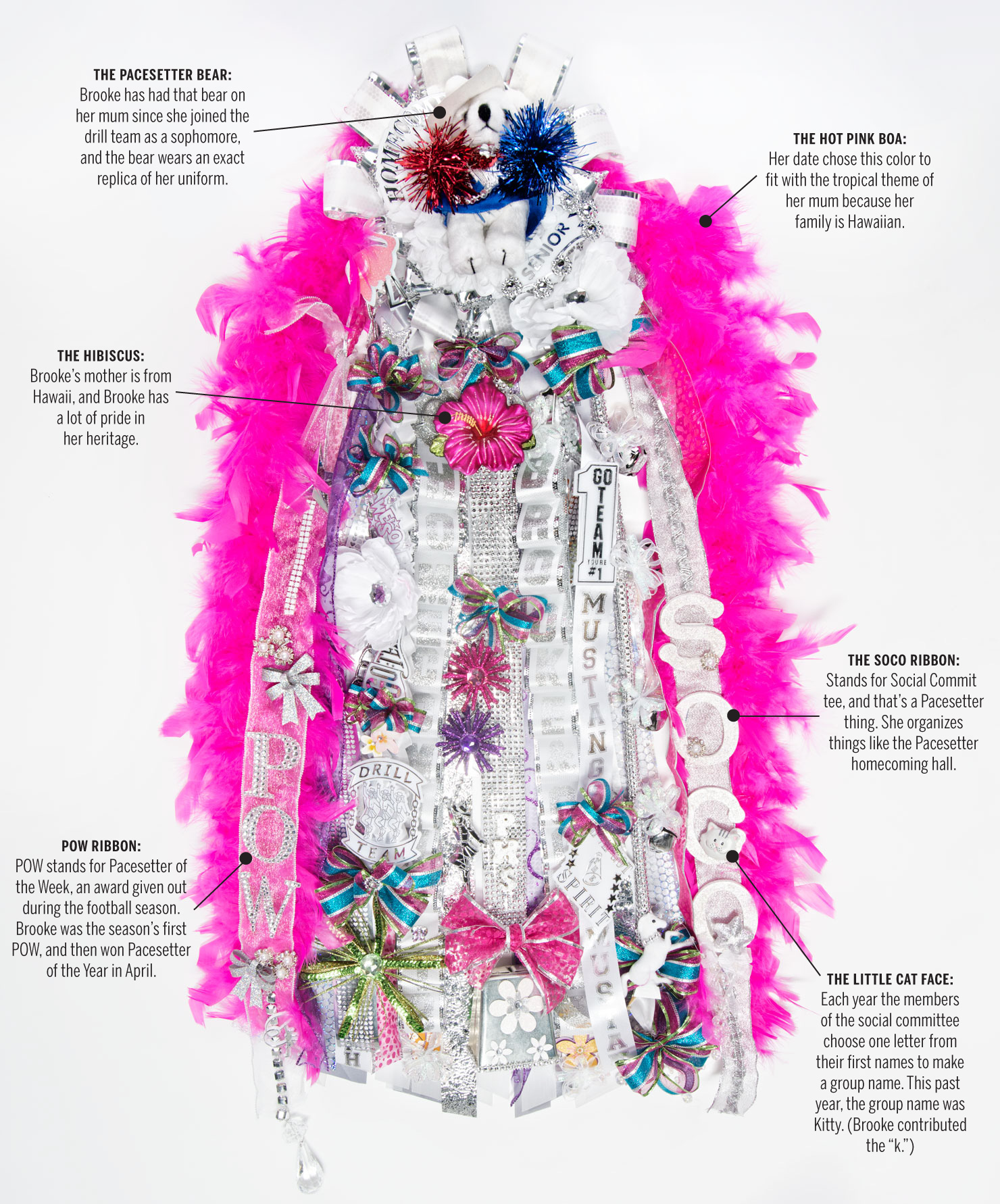 This is the last mum Brooke Bruneman, who graduated in June, received. Its sentiment started 12 years ago, when Brooke enrolled at Brentfield Elementary School in Richardson. If her family had just stayed in San Diego, where she was born, she wouldn’t be part of a tradition so specific that it can only be strange to people who didn’t attend high school under the near-tyrannical thrall of fall football.

Connor Follis, a slender, clean-cut 18-year-old with a quick smile who loves sushi and hates hot dogs, has been friends with Brooke since first grade. They went to the same middle school. J.J. Pearce High School was a natural progression. Connor played football for the first three years, but neither his build nor his attitude lent itself to serious athleticism. At the end of junior year, he tried out to be a Wrangler, one of 11 goofballs on the football field who amp up the crowd with various antics. He made it.

Connor and Brooke, who was a member of the Pacesetters, Pearce’s drill team, decided to go to homecoming together about three weeks before the dance, which would take place on September 28, 2013. It wasn’t, Connor and Brooke told me, the official homecoming “ask.” The ask comes just a few days before the dance, after everything is already planned. The desire to meet a girl’s expectations beats out the element of surprise.

“It’s fun because guys aren’t crafty,” Brooke says. “At least not my friends. It’s really nice to see how much hard work they put into trying to make us happy with the mum.”

Friday night was warm and humid, and Eagle-Mustang Stadium smelled like it should, like sweat and nachos.

The process is straightforward. A basic mum starts at $55. To customize, there’s a detailed form. The orderer chooses a specialty bear and then goes down the list checking off trinkets. One that says “I [heart] My Team” costs $1. Most cost less than $3.

By the time Connor was done filling his bag, he’d spent $120. Maybe more. There’s a reason he placed his order early. He knew Brooke’s senior mum meant a lot to her. It would be terrible if the shop were to run out of something your date wanted on her mum. A total disaster would be if the guy failed to put the order in on time and his date didn’t have a mum at all. A friend of Connor’s accidentally ordered his date a “friendship mum,” which is shorter than the normal one girls receive. This hiccup caused all sorts of problems.

But the mum is also a symbol, a snapshot of who a person is and how far she’s come each year. Growing up. Growing apart. Freshman year, Brooke added a little iPod ornament to the fake flower, just to make it unique. “You don’t know anything, and so your mums aren’t that big,” she says.

The pieces add up to something eventually. The ability to navigate friendships and extracurriculars is reflected in the ribbons. The size of the mum indicates a certain amount of thought and expense. Brooke’s specialty bear got to put on a tiny red, white, and blue Pacesetters uniform at the same time she did. Feather boas turned out to be a fun addition. But the most awesome mums, the silver and white behemoths, belonged to the seniors. Brooke wanted hers badly.

The people who put these mums together were PTA parents and student volunteers. Mostly women, but a few fathers got involved. They spent countless hours toiling in a storefront in a shopping center at the corner of Campbell and Coit, next to Natural Grocers. By the end of a season, they had churned out thousands of mums and garters, the slightly less elaborate version of a mum that boys wear around their arm. Brooke, who completed 480 community service hours her senior year alone, spent several summer days there with her friends, stapling ribbons to earn hours for Pacesetters and National Honor Society. 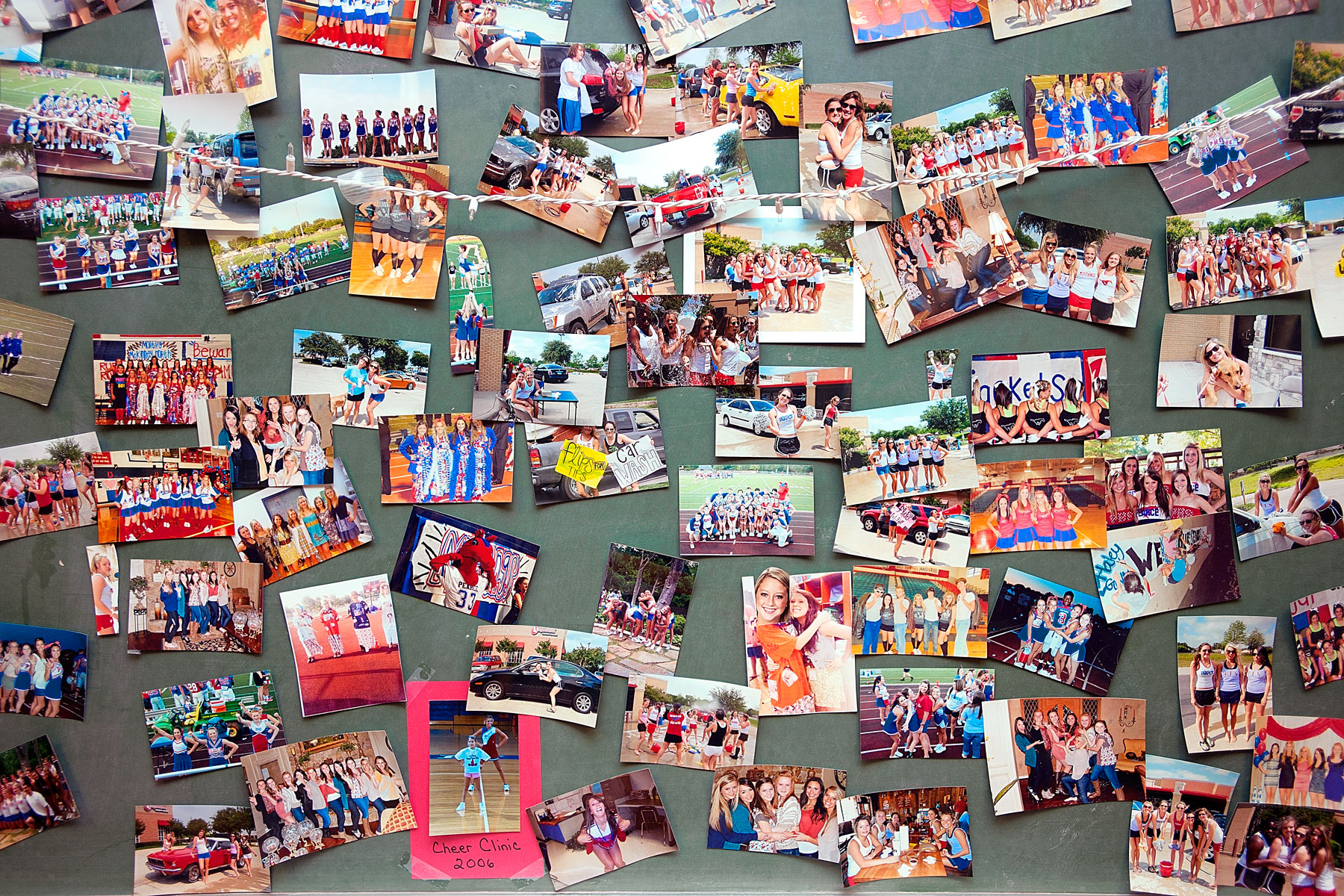 LAST RIDE: A wall in the drill team practice room.

Her mum had spirit charms, a drill team hat, and other drill team paraphernalia. It glittered in a way Connor knew his friend would like.

But it wasn’t quite done. Connor and his mom added a hot pink feather boa and a beautiful, glass hibiscus flower in honor of Brooke’s Hawaiian heritage. They added pineapple charms and tiki torch charms, a tiny ukulele and little palm trees. Meanwhile, elaborate plans for the official homecoming “ask” were waylaid. Brooke, who also danced competitively outside of school at Revelation Dance Studio for eight years, had sprained her foot practicing the Pacesetters’ special homecoming routine.

Brooke saw her senior mum for the first time on September 24, in the large, shaded backyard of her paternal grandparents’ house in Addison. She loved it. It was tropical and huge and perfect. It was the best one.

Pana, Brooke’s mother, had told me what a big deal the reveal was for the girls. She suspected that the guys could take it or leave it.

The mum exchange is also where Connor ended up making his move, which he knows was a tad cheesy. He borrowed an apron from his dad, plopped on a chef’s hat, and displayed a homemade recipe for the perfect homecoming—great friends; a game against Pearce’s rival, Richardson; sushi for dinner.

“It was very thoughtful,” Brooke says.

The group, nine couples in all, posed for photos with their mums and garters in the fading light. Parents milled about. The teenagers wore their custom sea-foam green homecoming t-shirts. The shirts indicated that they belonged together, united one last time. The topic of college, what everyone would be doing in a few short months, floated.

Before it went around her neck, Brooke’s mum dangled on a white wire hanger from a limb of a tree. A breeze rattled the enormous cowbell and picked up the silver and white ribbons she had wanted so badly.

Moments earlier, her mother had knelt on the concrete of the patio, stapling on a shiny strip that dared escape. 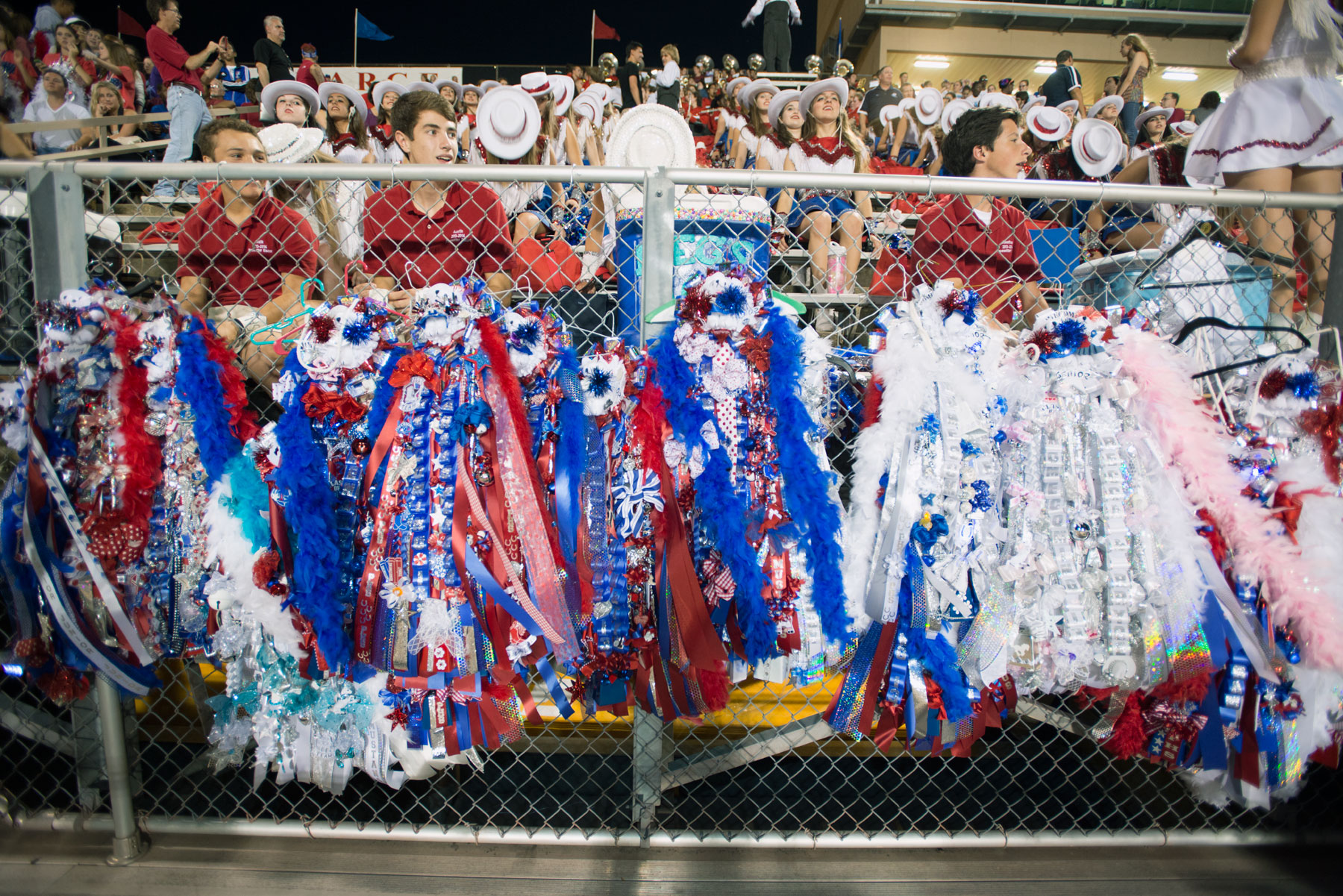 CHEERS: Students display their mums on a fence facing the field during the game.
Brooke, who turned 18 in July, only just started driving. She was so busy with activities and dance and schoolwork that she never found time to get her license. She was also okay with not having the responsibility. Still, she made it to Pearce by 7 every morning in time for Pacesetters practice, dropped off by her mother piloting a burnt orange Hummer.

The Friday of the homecoming game, both parents arrived to secure seats on the gym bleachers for the early pep rally. Brooke was performing. So was her younger sister, Paige, a sophomore who followed in her dancing footsteps.

The day of the homecoming game was the mum’s shining moment. It was Brooke’s, too. She’d worked until 10:30 the night before, decorating the Pacesetters homecoming hall she oversaw as part of her duties on the social committee. (Her mom had been there, too, painting like mad.) She looked forward to her classmates’ reactions. She loved overhearing students in the hall, saying that the Pacesetters hall was the best one.

The school was a chattering sea of blue and white and red. The seniors, with their silver and white ribbons and non-regulation accent colors—that hot pink boa is a perk of age—really did stand out. After the rally, Brooke hung her mum around her neck and went to class, the cowbell thumping against her shin.

“I don’t think I ever got bruises from it,” she says, “but it was definitely in the way.” 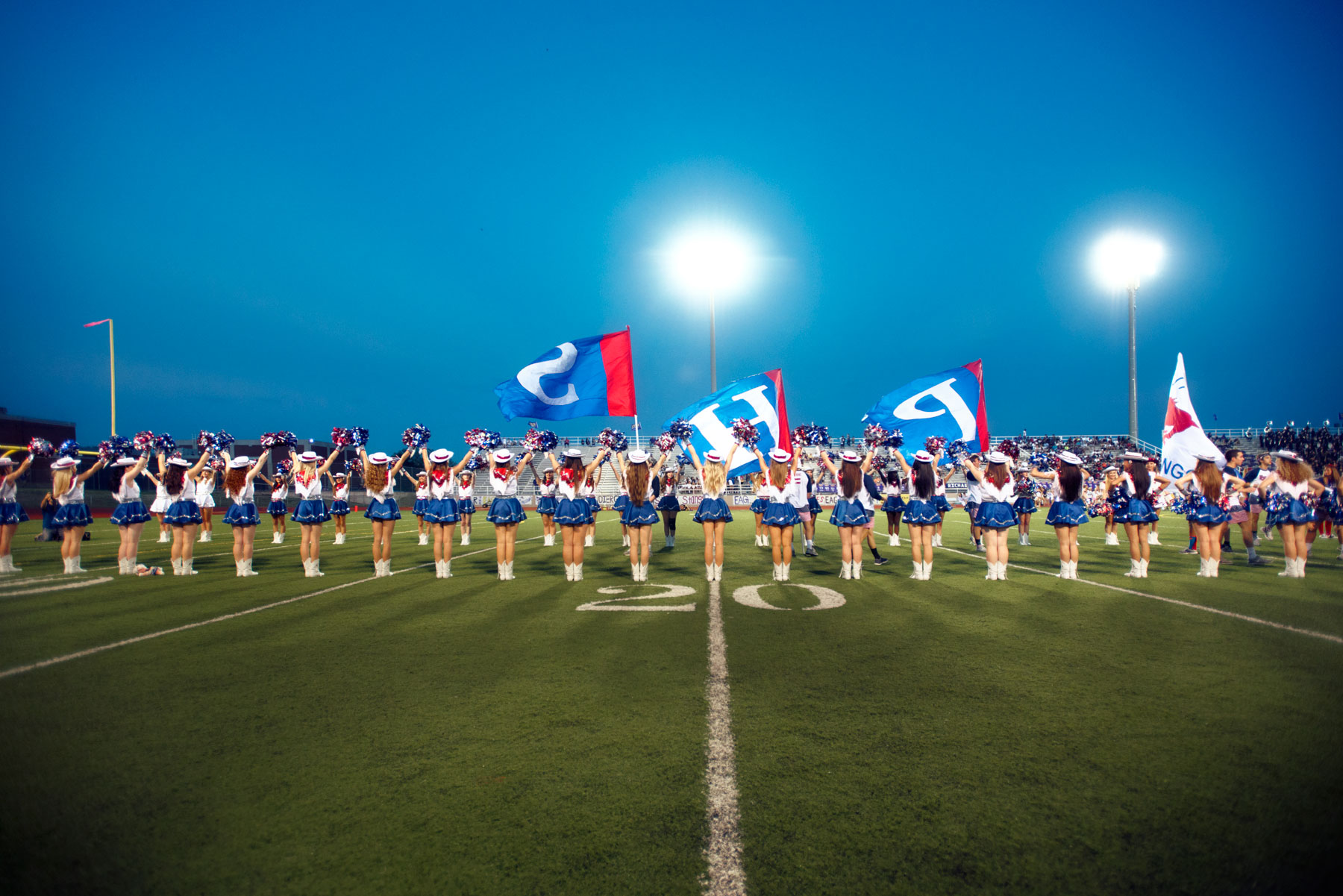 Friday night was warm and humid, and Eagle-Mustang Stadium smelled like it should, like sweat and nachos, celebration and something bittersweet.

On the Pacesetters bus on the way over to the stadium, there was singing and amateur football strategizing. Brooke, for her part, was pretty confident that Pearce was going to win.

At the game, Brooke’s mum found a temporary home among many others on the chain-link fence near where the Pacesetters sat and cheered in the stands. Down on the field at halftime, Brooke performed the horseshoe routine, a dance she’d learned the summer after her freshman year, for the crowd.

“You don’t understand why it’s special. You just accept that it is because everyone tells you that it is,” Brooke says.

The first homecoming a Pacesetter does the horseshoe is magical. The last time draws tears.

After the game, Brooke’s mum went back to her house on Van Hook Drive, where it would stay. The mums and garters did not go to dinner the next evening, at Bistro 31, or ride in the dark blue Hummer limo with zebra stripes, or make an appearance at the dance, which was considered a necessary evil, or to the homecoming after-party at her friend’s lake house.

There is, however, a nice wall near the entrance to Brooke’s tidy, lavender-hued bedroom. There are three red, white, and blue mums up already, and now her collection is complete. She’s glad it’s done. The unevenness was getting to her.

It’s fun to see them, all together on the wall, and look back on the summation of her high school years. Different dates,
different moments. But already her priorities, the trinkets, the bits that make up a life, are shifting. She has selected biochemistry as her major at the University of North Texas. She’ll go pre-med, graduate in four years, then apply to UT Southwestern.
She won’t dance much anymore. She’ll rush a sorority. She’ll actually watch a football game.