Georgianna McKee woke in the dark to the sound of an old cast-iron dinner bell tolling low, growing faint, and finally falling silent. She felt the mattress moving beneath her body. She sat up and tried to be still. And she listened for footsteps outside.

But on December 8, just after midnight, out in the northeast corner of Parker County, the only sound she heard was her own breathing. With a hitch in her step from a worn-out hip replacement, McKee, 78, moved through the small house her late husband built with stone slabs pulled from the pasture. She hit the floodlight switch in the kitchen and peered out the windows. No one was there. The bell was still, anchored to a cedar post sunk deep in the loamy soil. It was heavy enough that even the most violent storms couldn’t make it ring. The only time it sounded was when she pulled the crank and called her husband to dinner.

“He’d be down at the barn, fooling with his horses and yelling at them, but he could hear that bell.”

She pulled a jacket over her nightdress and stepped outside with a flashlight. She swept its beam over the trees, the creek running past the house, and the dinner bell, adorned with a fading eagle she’d painted years ago. There was scarcely a breeze. McKee shuddered in the cold and ducked back inside. For another hour she lay there, too stirred to sleep. This was the strongest one yet, she thought.

The next day, she made a point to watch the news, as she always did after nights like this. In the day planner that tracks her schedule and doctors’ appointments, she also dutifully penciled in the dates, times, and magnitudes of each earthquake she felt. Last night added a 3.6 to her running tally.

In the nearly 35 years since she’d anchored her dinner bell on these 11 and a half acres, she’d never felt an earthquake until November 6, 2013. She could look back 150 years, and the historical record would bear no evidence of seismic activity in the area until now. Yet in the last month, there had been more than 20 quakes.

“Boy, that’s the big conversation at church and everywhere else,” she says. “What’s going on?” 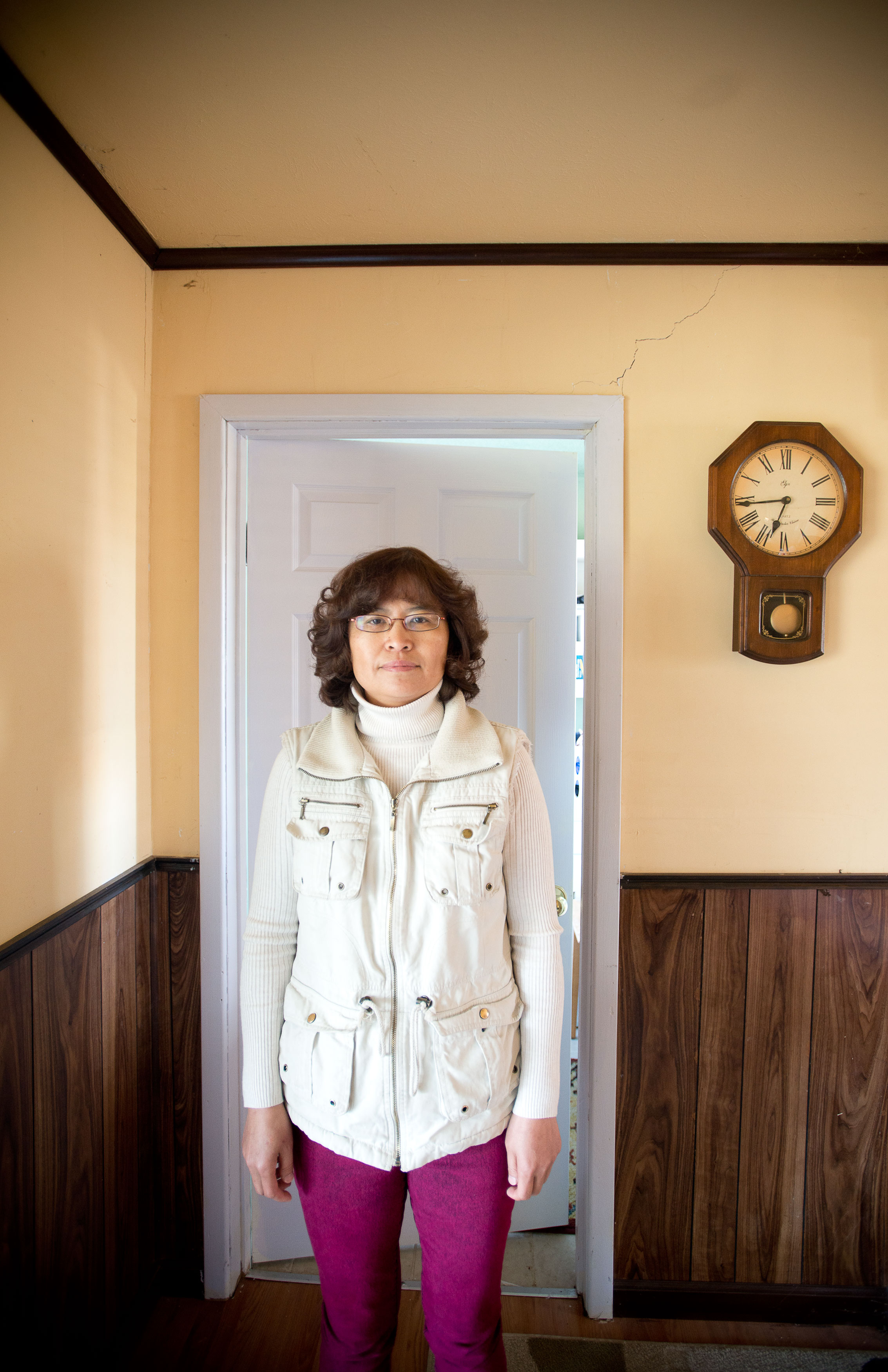 DAMAGE DONE: Shallow earthquakes near Mingshu Yin’s parents’ house—a mile away from a disposal well—have cracked walls, split rafters, and ruptured a sewer pipe.
Overnight, something shifted beneath the oak and juniper hills about a half-hour northwest of Fort Worth, near Eagle Mountain Lake. Even the oldest of old-timers said they’d never felt anything like it. They’d always taken for granted the ground under Reno and Azle, two working-class towns with a little more than 13,000 residents between them. It was a fixed point in the community, worthy of remark only as it pertained to drought, or to the productive shale that underlies the whole land.

Now, it was as though something sleeping beneath had roused. It shook them awake in the night and scared their children.

When the tremors came, the people heard a concussion like thunder. Some likened it to a sonic boom. Others to a muffled explosion. It rattled windows in sills and pictures against walls. At first, a few would report sprinting outside, looking for the trucks that had surely collided with their homes. After a while, they marked the passage of each quake with weary resignation, wondering if perhaps this is how it would be now.

Out on Cardinal Road, where the population gets sparse and the space between neighbors grows, Meredith Hull swore she could predict the tremors by keeping an eye on her donkeys, Larry, Moe, Curly, and Pinto. “Three hours before the quake hits, our animals go nuts. The horses and donkeys head to the north pasture and run and run. Our goats make all sorts of racket.”

Through November and December, sometimes they experienced several a day. Sometimes a few days would pass in between, and all the while, the unlucky ones would trace lengthening cracks in their walls. Keding Yin, a retired coal mine engineer from northern China, bought his little piece of Texas next to Hull, and a few goats, too. He’d come here with his wife, Jie Chen, in 2001 to be near their daughter, Mingshu. “The first one, Daddy didn’t know what happened,” Mingshu says. “He thinks it’s a bomb and called 911. Police came and said, ‘What’s going on?’ ”

She had lived through the bucking and rolling of earthquakes in Los Angeles. This felt altogether different, like a single, violent dislocation. Mingshu, a GIS analyst at an engineering company, pulled up USGS’ website and was struck by the shallow epicenters it detected near her parents’ home. “A natural quake is like 10 miles down,” Mingshu says. “This is three kilometers.”

As the country west of Eagle Mountain Lake trembled with stunning regularity, Yin watched the damage accumulate. He found a rafter in the attic split right down the middle. A sliding-glass shower door shattered during one of the 3.6s. In the kitchen, the ceiling separated from the wall. And outside, a fracture splintered through brick and mortar alike, from roof to foundation. Every door in the house facing north and south wouldn’t close. Yin knew his sewer pipe had ruptured when the scent of human waste wafted up through the floor. He and his wife stayed with Mingshu in McKinney, their home temporarily uninhabitable.

In Reno, residents were advised to boil their water when a 10-inch main broke in two places and 40,000 gallons emptied into the earth. In Azle schools, the children practiced taking cover beneath their desks, just in case the big one struck and the roof collapsed. Whatever novelty the earthquakes held at first had been dissipated by claims home insurance wouldn’t cover and the sound of thunder in a cloudless sky.

By then, the seismic activity wasn’t so mysterious. Folks in town were talking about the natural gas wells drilled all over Parker County, within eyesight and earshot of their homes. The word “fracking” crept up in conversation. The papers printed interviews with geophysicists who believed it was likely connected to faults triggered by deep oil- and gas-field waste disposal. These disposal wells ring Azle and Reno.

Back in 2001, when the Barnett Shale gas play first moved into northern Parker County, McKee and her late husband, Eddie, turned down lease agreements and the sums the landmen offered. But she knew now that a fenceline would not isolate her home from what was taking place around it. “Enough is enough,” she said.

“The first one, Daddy didn’t know what happened,” Mingshu says. “He thinks it’s a bomb and called 911. Police came and said, ‘What’s going on?’ ”

All along, the Railroad Commission, the state’s oil and gas regulator, maintained it had “not identified a significant correlation between faulting and injection practices.” But when the shaking didn’t stop, it tweaked its stock statement in December to say that the correlation was not “definitive.” Yet it remained at odds with everything else McKee had heard, not just from folks at church, but from the USGS.

Finally, she read in the Azle News that Railroad Commissioner David Porter would host a town hall meeting in the Azle High School auditorium on January 2. McKee resolved to go, determined to win back her quiet country life.

That day, a passerby might have been forgiven for assuming the football team was about to play for the state championship. The parking lot around the stadium was almost at capacity, and still more vehicles were idling, waiting for the line to move. The antennae of news vans from Dallas and Fort Worth rose into a clear winter sky. Inside, state troopers, sheriff’s deputies, and local police lined the walls as people filed in, until the murmuring of some 800 or more swelled to a din and filled the auditorium. They swapped earthquake stories and damage descriptions. They shook hands with neighbors. And they waited for someone in power to explain what had changed beneath their towns.

Commissioner Porter, a mild, graying former oil and gas
accountant from Midland, took the podium. The two other commissioners were absent. Chairman Barry Smitherman, then a candidate for state attorney general, was speaking before a Republican organization in Houston that afternoon.

Porter thanked the audience in a soft, flat voice ill-suited for public speaking. “I also want to let you know that I am very concerned and involved in this issue,” he said, interrupted by a raised voice from the crowd.

“Who are you?” a man called. Porter started again, haltingly. “No, seriously, who are you?”

“David Porter, Texas Railroad Commissioner,” he responded to lusty applause. He continued. “But we have to base our actions on sound science and proven facts, not speculation that appears in some newspaper articles and some blogs. That’s why we’re here, to hear from you about your experience.”

He took a seat at a table on the stage, flanked by commission staffers and local officials. First in the audience to speak was a big man in a ball cap named Jim Lasater. Gesticulating nervously, he asked how he could depend on the unbiased conclusions of the state, “since there’s so much oil money that goes into the campaigns of elected officials.”

Lasater waited a few moments, the cheers of a restive audience at his back. When it quieted down, the event moderator, Porter’s chief of staff, informed him that the meeting was for listening to residents, not for answering their questions. The mood turned, and the auditorium rang with boos and derisive laughter.