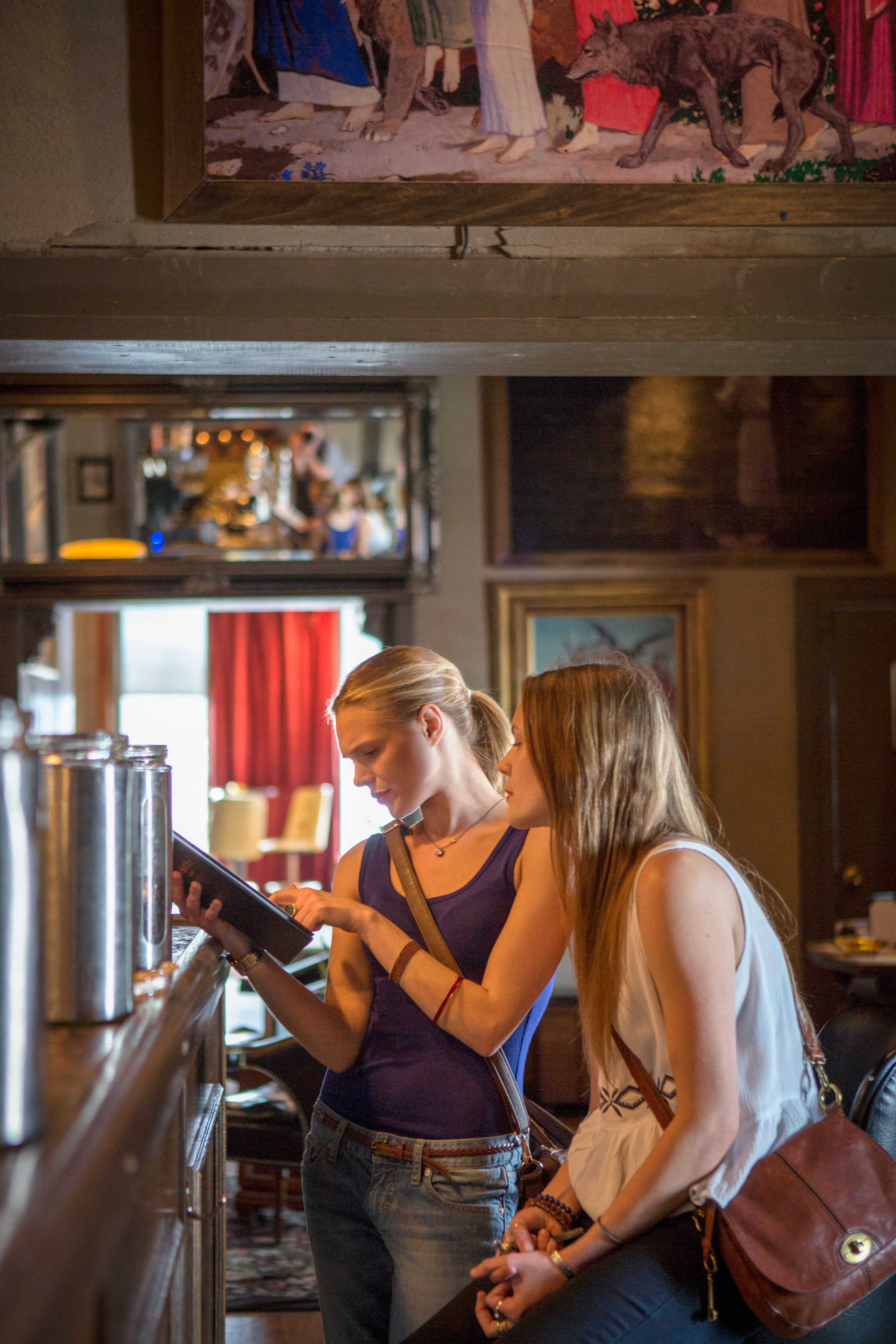 The unmarked wood door was easy to miss. I walked past twice before identifying it as the portal to Denton’s (obviously) low-key Paschall Bar. When my bearded friend pointed out that the door is plain on purpose, my frustration vanished. Who doesn’t love a secret bar?

After climbing a tall, steep staircase and opening another door, we found a low-lit and smoky space with dark woods, red drapes, and walls covered with portraits and traditional European-style art. People seated on long leather couches played chess and flipped through books pulled from huge bookshelves that line the walls (I spotted everything from a collection of English literature to the Encyclopedia of Organic Gardening). There are dartboards, Persian-style rugs, and a vintage wooden bar.

Bartender Thomas told me that Denton folk-rock band Midlake opened the bar in October 2011. Paschall may still be a secret to some of my Dallas friends, but here in Denton, word’s gotten around. The line at the bar was growing fast, so I settled in to wait for a drink. I watched as the bartenders shook, stirred, spritzed, and even set things on fire (more on that in a minute). Paschall’s menu boasts a slew of specialty cocktails with names like the Spiced Iris and the Jack Rose, plus a selection of martinis, mojitos, mint juleps, and craft brews. My friend opted for a White Russian, but I still hadn’t made up my mind. The tattooed bartender said I couldn’t go wrong with the Smoking Jacket. James, a tall man standing behind me, agreed: “It’s really good.”

As the bartender mixed, James and I chatted. He used to be in the military, but his passion is writing. He told me he’s been working on a novel for eight years. “I used to write whenever inspiration struck me, but Stephen King said that’s for amateurs,” he said. “Now I write whenever I can.”

We agreed that, with its mountain of books and sultry allure, Paschall Bar is literary inspiration waiting to happen. I turned back to the bartender just in time to watch her create a small bonfire with a mini blowtorch. Then she placed my glass upside down over the smoking maple wood before pouring in the concoction.

Back at my table, I sipped my smoky cocktail and studied the crowd: mostly local grad students and young professionals. There were plenty of people in skinny jeans, and at least one group of middle-aged couples. Nearby, four bespectacled men in hoodies politely clinked glasses.

At the far end of the bar sat two trendy regulars. She had dark red hair and square-framed glasses; he was slim with tight, red pants. They said they were recent graduates of the University of North Texas and live nearby. The redhead ordered the Spiced Iris, which came lilac-colored and fragrant.

“The drinks aren’t cheap, but we don’t come for cocktails,” she said. “We come for masterpieces.”