The trees and rolling hills lend a warm, suburban vibe to Marion and Larry Pollard’s West Arlington neighborhood. Shouts of children from a nearby elementary school waft in on waves of heat as you step inside the foyer of their comfortable ranch home, where you’re surrounded by portraits of the grandkids—eight of them, ranging in age from 5 to 22.

To the right is the Pollards’ office, looking like any pastor’s study, with a desk, a trio of chairs, and bookshelves lined with Bible commentaries. A box of tissues sits discreetly beside one chair. A football-sized terrier named Bella bounces in and nestles behind you when you take a seat.

You won’t hear bland Bible homilies in this place, however. The Pollards are exorcists, practitioners of an ancient specialty mostly lost since the early days of the church, and their job is to cast out demons. The demons come out through gagging and coughing and shaking and yawning, with minimal histrionics, because Larry “binds” the theatrical antics of demons, such as flinging bodies across a room. They call it gentle deliverance.

Pastors and Christian mental-health professionals from all over the country quietly refer clients they just can’t help to the Pollards, after trying everything. In the 15 years or so since the Pollards started their ministry, there has been no shortage of tortured souls.

For the next four hours, I will witness an exorcism—or, as they prefer to call it, “deliverance session”—and it will blow my mind. Not because I haven’t seen a deliverance before. I have, but it was while on Christian church missions in Nigeria and Botswana. I’ve never seen this: the juxtaposition of these plainspoken, ordinary West Texans and the Dantean drama that plays out in front of us, via the soft frame of a 38-year-old suburban mom we’ll call Ruth.

Ruth bounds in with a smile and a designer bag, hugging the Pollards, winking at her own jokes, and getting comfortable in a cushioned chair next to the tissues. She pulls out a zebra print-encased iPhone and reads her notes of a recent dream in which a big, angry boss man appeared, telling her she had no right to take over his place.

The Pollards say they never employ hypnosis. Neither do they make suggestions. “We don’t lead them in any way,” Larry says. “Because that would be us and not the Lord.”

Larry, 68, who looks like a giant garden gnome with his white hair, beard, and boxy physique, jots notes on a yellow legal pad, then calls on the Holy Spirit to protect everyone present. Then he homes in on the culprit. “Get up and face me,” he commands, in a Texas drawl. “I want the one that is trying to intimidate, to act like the big boss. Get up here and face me right now. I call you to judgment.”

Genial, wisecracking Ruth vanishes. A metamorphosis takes place, with subtle changes in voice, movement, and expression. Her head begins to shake and bob. Her arms tense up and straighten. Her fingers stiffen and arch upward. Her head jerks to the left, avoiding Larry’s steady, unsmiling gaze.

Marion, 65, looks on beside them, praying quietly.

“Turn the head right now and look at me,” Larry demands. “Who are you?”

The head snaps forward and drops. The mouth lets out a long sigh—ahhhhh. A robotic, vaguely masculine voice responds: “What do you want?”

“What is your function?” Larry asks.

“I have no function except to torment,” the voice answers. The eyes are fixed in a way that is glaring yet vacant.

“Yes, I have,” the voice says, in a clipped, mocking tone.

“What is your right?”

“Her sexuality,” the voice groans, drawing out the consonants with a hiss. “I take all of their reproductive organs. Everyone gives to me.”

“How long have you tormented her?” Larry asks.

“Foreverrrr,” the voice says, breaking into a growl. “As long as I want to.”

“That ain’t the answer,” Larry interjects. “Do you want me to punish you?”

As he does many times on this April day, Larry calls on the angels of God to torment the demons with flaming swords until the spirits speak truthfully or depart altogether. After considerable interrogation, and after Larry repents on Ruth’s behalf for the sins that allowed this demon to take residence in her, the thing apparently leaves. Ruth bobs her head and exhales.

She plucks a tissue from the box and dabs a tear.

“I felt it leave,” Marion says, speaking for the first time. “Thank you, Jesus.”

Let’s just say that Hollywood got a few things right. The demon voice, the jerky head movements, that quavering growl. The empty look.

Through multiple grueling hours, stopping between demons for Ruth to compose herself and take a swig from a 44-ounce McDonald’s iced tea, I learn that Ruth and her siblings were physically abused by their father. Protecting herself, their mother thrust Ruth on the old man, using her child to absorb his Jekyll-and-Hyde ragings. “Go make Daddy happy,” she’d say.

Ruth is paying for it today. She estimates she has spent “20 to 25 grand, minimum” on counseling, with little to show for it. She struggles with anger, emotional coldness, the need to control. She watched her daughter and niece develop severe panic attacks. Although she has been successful in business, Ruth describes her old self as a “witch.” She knew it was time to take on the family demons.

Her sister directed her to the Pollards’ Comfort My People Ministries. After five sessions with Larry and Marion, she’s a happy customer. They accomplished in one session what years couldn’t do in counseling, she says. The first appointment weirded her out, she admits, but she felt good afterward, so she came back.

Dozens of what appear to be demons manifest and depart during this day’s session. Larry coaxes out their names and functions, a veritable pantheon of entities known and obscure: Maranthia, who cuts wicked deals; Horus, Egypt’s falcon-headed god; Molech, who the Bible describes as “the detestable god of the Ammonites.”

Ruth morphs into another person altogether when Larry commands these spirits to manifest. Either she is an Academy Award-winning horror-film actress, with Ferrari-smooth shifts of body and voice, or she is encountering something in a subconscious realm. At one point, she speaks the name of a demon in a distinctly foreign voice: “Ba-al.” Later, in casual conversation, the pronunciation comes out differently: “Bail,” with a bit of a twang—the name of a Canaanite god mentioned numerous times in the Bible.

She describes the experience as sitting in a passenger seat, watching things unfold beside her as though another part of her brain controls them. “It becomes our little scavenger hunt,” Ruth says cheerily. “What’s the crazy little person inside me going to say next?”

The climax of the day is wrought with emotion. Ruth sees herself transported to an ancient mountain, where she observes blood and people screaming. “They’re trying to sacrifice up there,” she says in a raised voice. She puts her face in her hands and rocks side to side. “Please forgive us,” she says. “Oh, God, forgive us. Oh, God, forgive us!” She breaks into racking sobs. “Have mercy on my family!” she cries out.

When Larry casts out the last demon, Ruth crumples in tears, with Marion cradling her head and singing softly in her ear. 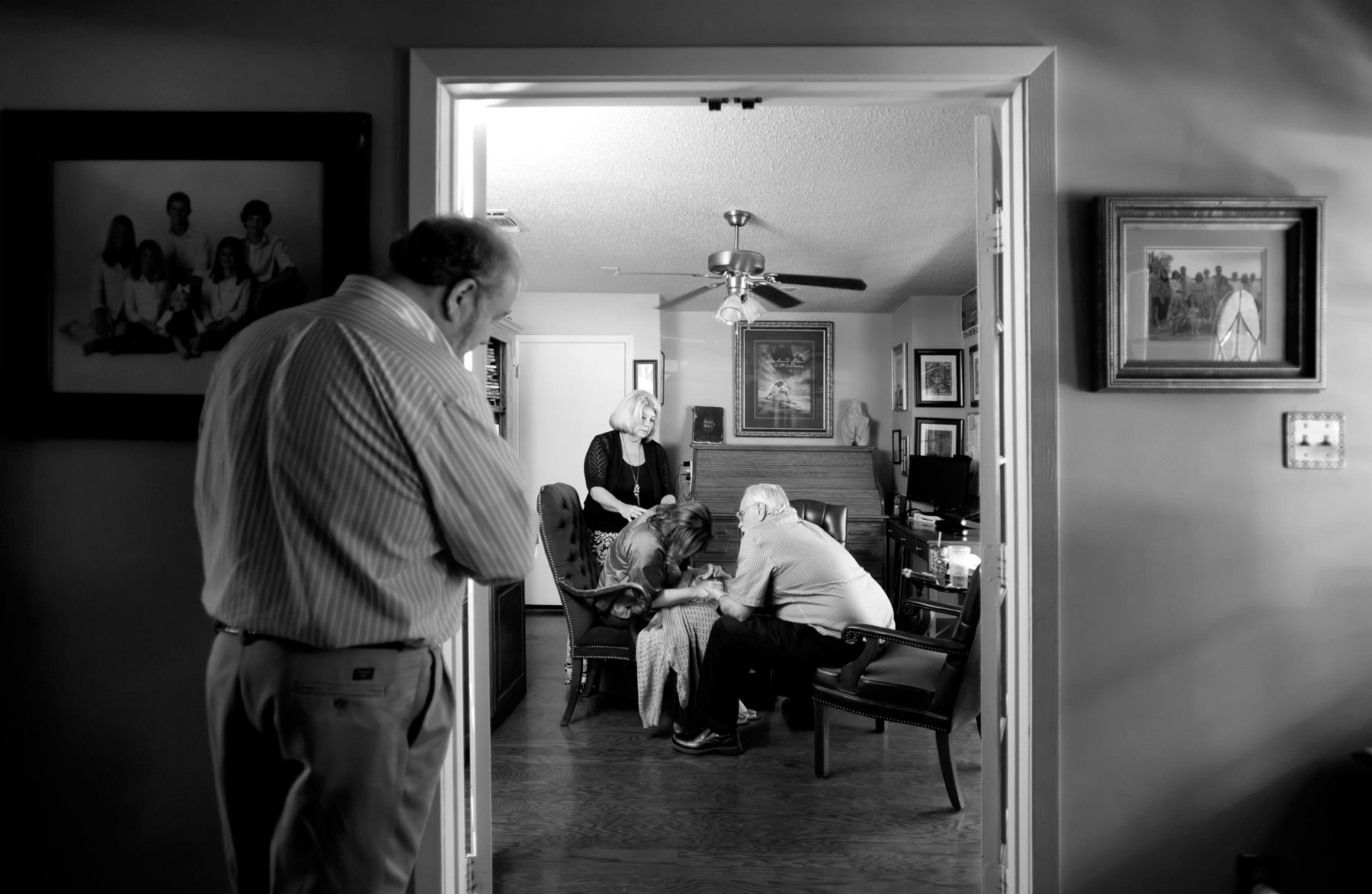 SIGH OF RELIEF: The Pollards say that a burp or a yawn might signal an exiting demon.
The early Christian church had its hands full with converts from paganism. Consider believers in the ancient city of Corinth, with its Wild West atmosphere and famed temple of Aphrodite. In this Greek crossroads city, a reported 1,000 male and female sacred prostitutes did their thing beneath the glowering eyes of idols. Along with the ritualized lust and occult practices came demons—so exorcists played a prominent role in such churches. Exorcisms were “possibly the most highly rated activity of the early Christian church” in the eyes of outsiders, writes Yale University professor Ramsay MacMullen, one of the world’s foremost scholars of ancient Roman history, in his book Christianizing the Roman Empire.

Church fathers Tertullian and Justin noted that pretty much any old Christian was able to cast out demons in the name of Jesus Christ, and Saint Irenaeus observed that successful exorcisms were the impetus for many conversions. Miracles, healings, and exorcisms characterized church life at least through the mid-third century, MacMullen writes—then something happened.

That something was Constantine—the Roman emperor who declared Christianity the state religion in the fourth century, says Steve Woodward, a board member of Comfort My People with a Ph.D. in New Testament from King’s College of the University of Aberdeen, Scotland. No longer subject to waves of deadly persecution, Christianity “lost its edge,” Woodward says. Exorcists receded to the margins of the faith, where they have generally stayed ever since.

Scott Horrell, a professor of theological studies at Dallas Theological Seminary, explains why you’ll seldom hear mention of the demonic in American churches today. “Because we are rationalists, we are of the Enlightenment,” he says. One well-known Christian authority went so far as to tell Horrell, “I’ve never seen a demon possession that a pill could not cure.” But Horrell observed otherwise during 18 years of ministry and teaching in Brazil, where a syncretic religion called Umbanda—a mix of African tribal religions, indigenous Indian religions, elements of Roman Catholicism, and Kardecian Spiritism from Europe—is widely practiced among all strata of society. Demonic oppression “is reality in other parts of the world,” Horrell says, “and I’m quite convinced it’s reality here. And there are probably many in our psych hospitals who are medicated to suppress what appear to be the outcroppings of possession, and the spiritual dimension is never addressed. It’s just never even looked at.”

Through travels with church groups to Nigeria and Botswana, I’ve also seen phenomena I cannot attribute to natural means. I watched a boy of 10 or so who fell to the floor and began speaking in a guttural, grown man’s voice. Although I was among ordinary Nigerians who converse in broken, heavily accented English, the boy orated with precise British diction. At another time in the same place, a woman rolled and flailed with such force that she sent plastic chairs scattering.

At a small urban church in Gaborone, Botswana, I was plunged into a Boschian tableau in which several young women jerked and flopped on the floor, rolling their eyes, kicking up dust. One smacked me in the face so hard that my glasses went flying several feet away.

Perhaps they were all faking it and were pitiably suggestible, or perhaps as a Christian myself, I am biased (and not a little naive). Or perhaps there’s a pseudo-intellectualism that causes us to consign things we don’t understand to the rabid imaginings of benighted people in faraway lands.

Which isn’t to say it’s all real. There are kooks out there, screaming at imagined demons and drawing attention only to themselves. And there are the guys in Gaborone, who called themselves ministers and took the opportunity to manhandle young women in supposed ministrations of prayer. The demons manifested, but they never seemed to leave. The men appeared to get a kick out of the chaos.

So if I have a bias, it’s this: I’ve seen enough to convince me that personal forces of darkness are at work in an unseen spiritual realm. When a friend told me the Pollards were the real deal, deliverance ministers who get verifiable results, I resolved to check them out.

NEXT HE’LL CHANGE HIS NAME TO MARLON,

What Next? Tornado Monthly?