Late last spring, I took my 15-year-old niece, Hannah, to an event at the Winspear Opera House, just one of the splendid venues in the AT&T Performing Arts Center. We left her home in Far North Dallas early enough to have dinner at One Arts Plaza. After I paid the bill, we strolled across the campus of Booker T. Washington.

We passed a grubby young man dramatically stroking a wooden wand in the air. His head tossed back and forth, then side-to-side like a mad man as he practiced conducting an orchestra. A group of thespians sat under a tree and listened as a young man read from a script. The afternoon sun lit his face like a peach-colored spotlight. He only managed to recite, “To be or not to be” before a bearded student with a saxophone snuck up behind him and blasted a faintly discernible jazz riff. They wrapped tattooed arms around the disheveled Hamlet and pulled him to the ground and collapsed in laughter. My niece was spellbound. 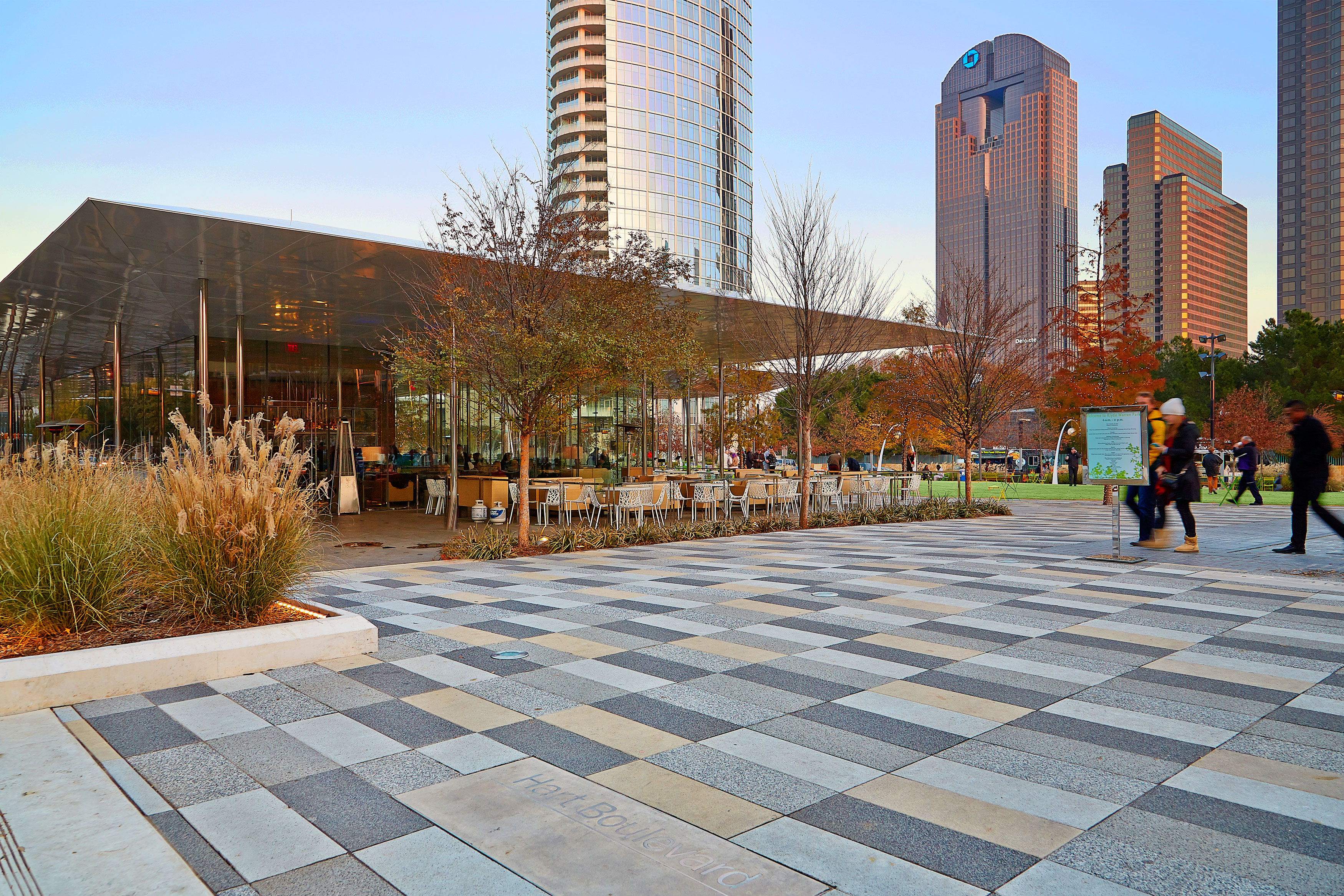 DINNER WITH A VIEW: Savor in Klyde Warren Park
Downtown Dallas was marvelous when I was a child. In the late 1950s, my father’s business was located in the turquoise building at 211 North Ervay. I loved going to the office with him. He thought nothing of letting an 8-year-old cruise up and down Main Street alone. The streets were filled with pedestrians, restaurants, theaters, and shops. Then my family, along with a majority of others living inside-the-loop before there was a loop, moved north. The nightlife in downtown slowly dwindled until it was almost extinct.

Over the last 10 years, billions of dollars have been spent to develop the northern side of downtown. The Dallas Arts District, Perot Museum, elegant high-rise condos and apartments, and public transportation have changed the image, but the addition of Klyde Warren Park sparked the fire of activity that now rages between Uptown and downtown.

It is hard to believe that a 5.2-acre public park built over a freeway would have so much impact on the soul of a city. When the weather is mild, the grass field fills with families, couples, and office workers of every race, creed, and income level. 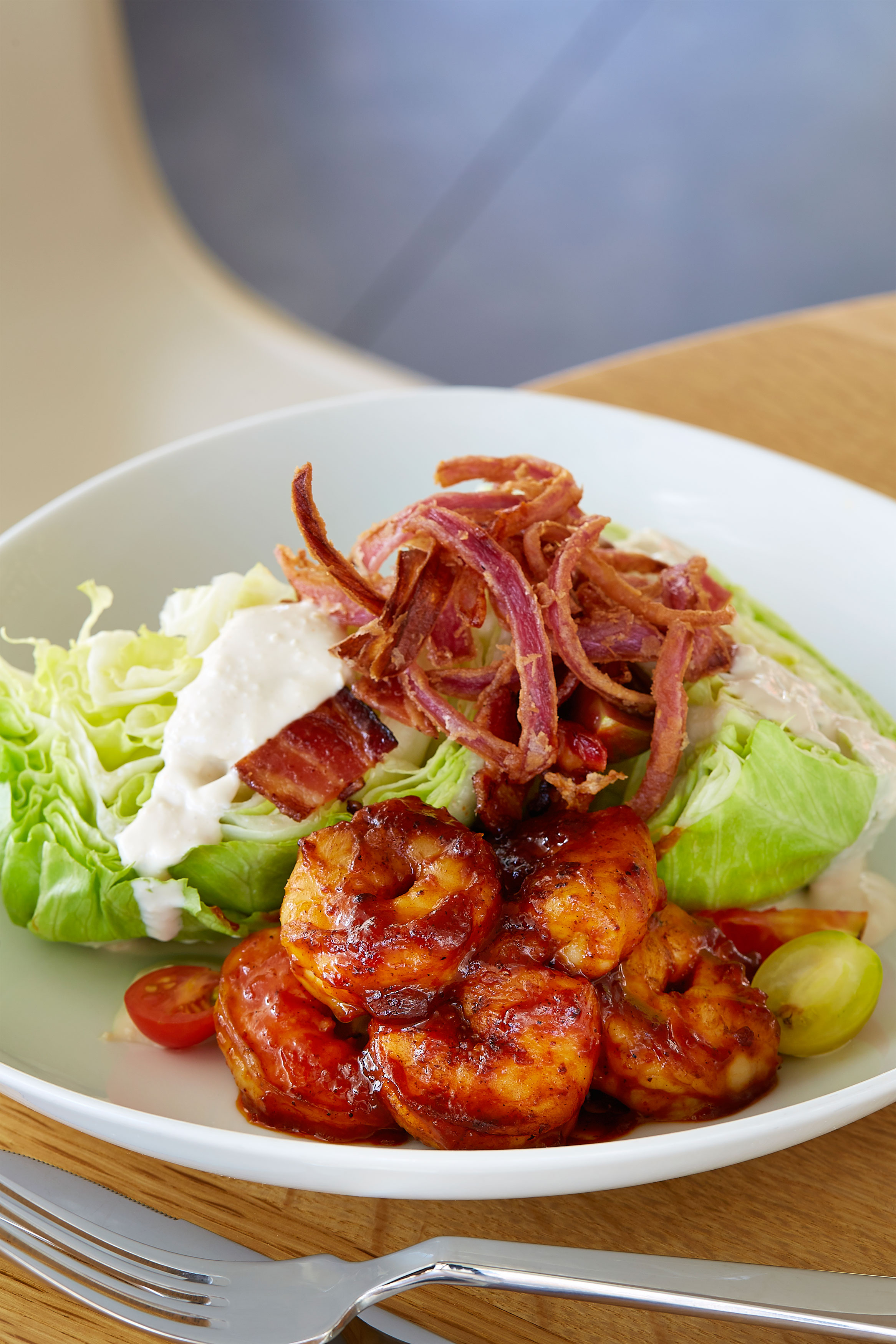 Barbecue shrimp and wedge salad
When the park opened in October 2012, food trucks provided nourishment and refreshments for frolickers. The food trucks remain along the southwestern end of the park, but last September, Savor, the first sit-down restaurant in the park, opened. It’s a 325-seat bobby dazzler.

The rulers of this elegant 12-foot glass-walled roost are executive chef John Coleman and chef Joe Scigliano, formerly of The Ritz-Carlton Hotel in Dallas. Coleman was the executive chef and director of food and beverage; Scigliano was the executive sous chef. They left their jobs to team up with John Muse, partner and chairman of HM Capital Partners and a member of the Woodall Rodgers Park Foundation. Today, they are chef partners at the most talked about restaurant in town.

Their vision for Savor was to create a sense of community like the gastropubs in England and Ireland. When Coleman was developing the menu, he described the fare as American Social Food. “I’m trying to balance artisanal with commercial appeal,” he said. “I will do fun things with deviled eggs, sliders, meatballs, shrimp, and calamari.”

The kitchen is doing all of the above and more, but the quality of the food and service is shamefully inconsistent.

On three separate occasions, the deviled eggs were overcooked and rubbery. I bounced them through the pepper relish and specs of spiced pecan brittle on the plate. One night, the tempura-fried shrimp and calamari was delivered chewy and tough and overcoated with a cloying Kung Pao–style sauce. A week later, the same dish was delectable: the crunch of charred calamari against warm, firm shrimp was enhanced by a gentler kick of sauce.

The chopped salad was equally erratic. Once it was delivered as a lovely plate of semichopped romaine mixed with a light vinaigrette and generous slabs of soft avocado, olives, and cucumber. On another visit, the salad was nothing more than ribbons of sliced-past-its-due-date browning lettuce and scattered bits of tomato, cucumber, and radishes. The aroma of the produce was so foul I feared consuming it and felt compelled to inform the server. She apologized and promised to take it off the bill. The unremoved $10 charge was paid.

Dinner entrées ranged from a nicely grilled flatiron steak with a light chipotle sorghum glaze and a scrumptious creamed spinach fritter to a disastrous oversmoked salmon which, after three bites, was dispensed to a to-go box. Slow-braised short ribs served over hot Orecchiette mixed with melted aged black cheddar and cream cheese was delicious. So was the grilled red snapper scented with saffron pepper relish and served on a pile of puffy quinoa with toasted almonds and fresh mint. The best dish I tried was a special for the evening: a grilled, bone-in pork chop served with persimmon chutney, balsamic marinated cherries, butternut squash, and a drizzle of ham jus. 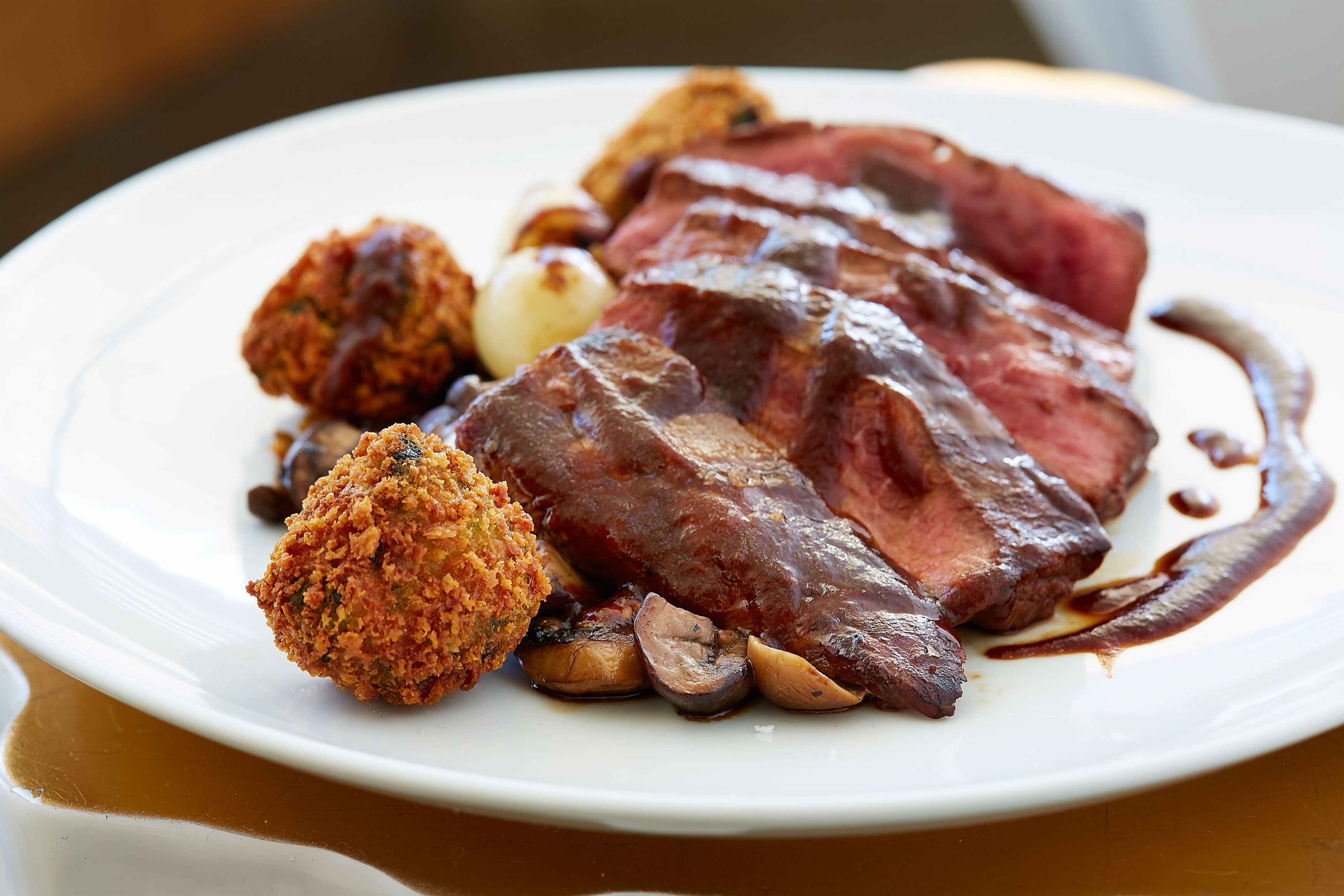 Flatiron steak
Desserts are gimmicky and reminiscent of those served on a banquette buffet. The portions and prices are small. They offer them for $3 each, three for $8, six for $16. The German chocolate cake, advertised as “ooey gooey,” was bouncy, almost spongelike, and even with a touch of caramel, it fell short of luxuriating in the mouth. An ice cream sandwich made with ginger snaps and lemon ice cream fared better.

The kitchen and the staff manage the lunch menu and masses more efficiently. The menu is short and includes a sinful toasted sourdough bread sandwich with braised short rib Sloppy Joe meat between thick layers of melted cheddar and Monterey Jack cheeses. The burger patty is a blend of short rib, chuck, and brisket meat and cooked to your specifications. Mine was delivered medium rare plus and covered with tomato jam, aioli, and bacon. The “ooey gooey” menu verbiage should be moved to the burger description.

My biggest issue with Savor is the service. I realize they have been slammed since they opened, but unless you go after 1 pm on a weekday, you are likely to hit service lags and snags. I wonder if the complications of staffing a restaurant with 175 seats inside and 150 outside are the source of the problem. It may be difficult to predict Dallas weather, but it is even more problematic to schedule staff to accommodate the swift changes. 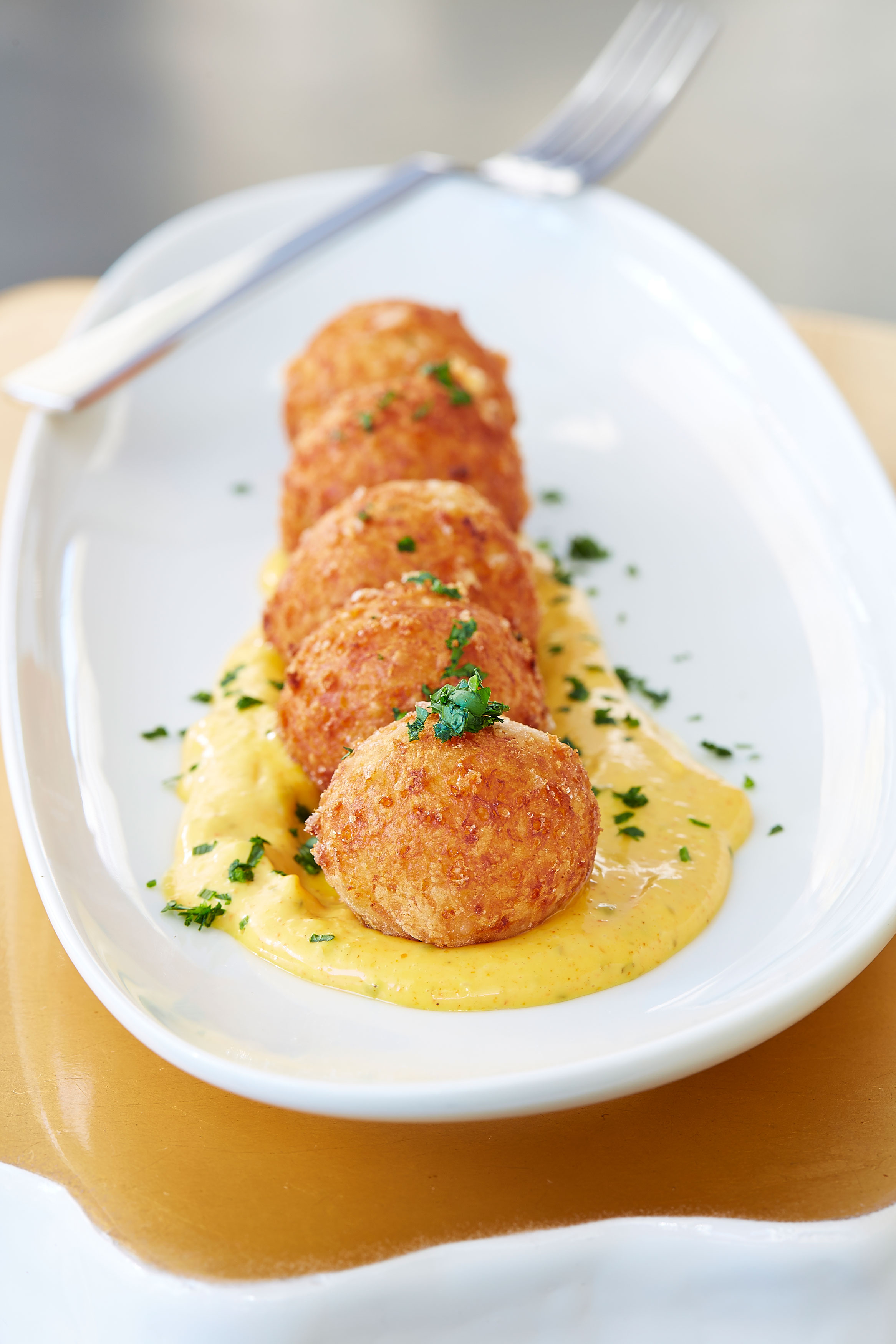 In early December, three of us sat on the patio on a glorious 70-degree evening. We sipped wine and watched a group exercising on the lawn. Dogs and their humans roamed beneath the white twinkle lights. A group of carolers surrounded the Christmas tree. The skyline of Dallas provided the backdrop. The restaurant was understaffed, and the meal took three hours to complete. The constant struggle for attention marred what could have been a lovely experience.

A week later, a cold snap prohibited outside seating, and the service was smooth. Our server, however, was new and had to run back to the kitchen to get answers to our questions.

Despite the aggravating service and the schizophrenic food quality, I’d go back. The restaurant, designed by Bill Johnson of The Johnson Studios in Atlanta, is stunning. The exterior walls are glass, and every seat has exquisite views. The flat roof extends out over the patio and appears to rest on top of the rectangular glass box. The interior walls are white oak; the floors, dark gray concrete. 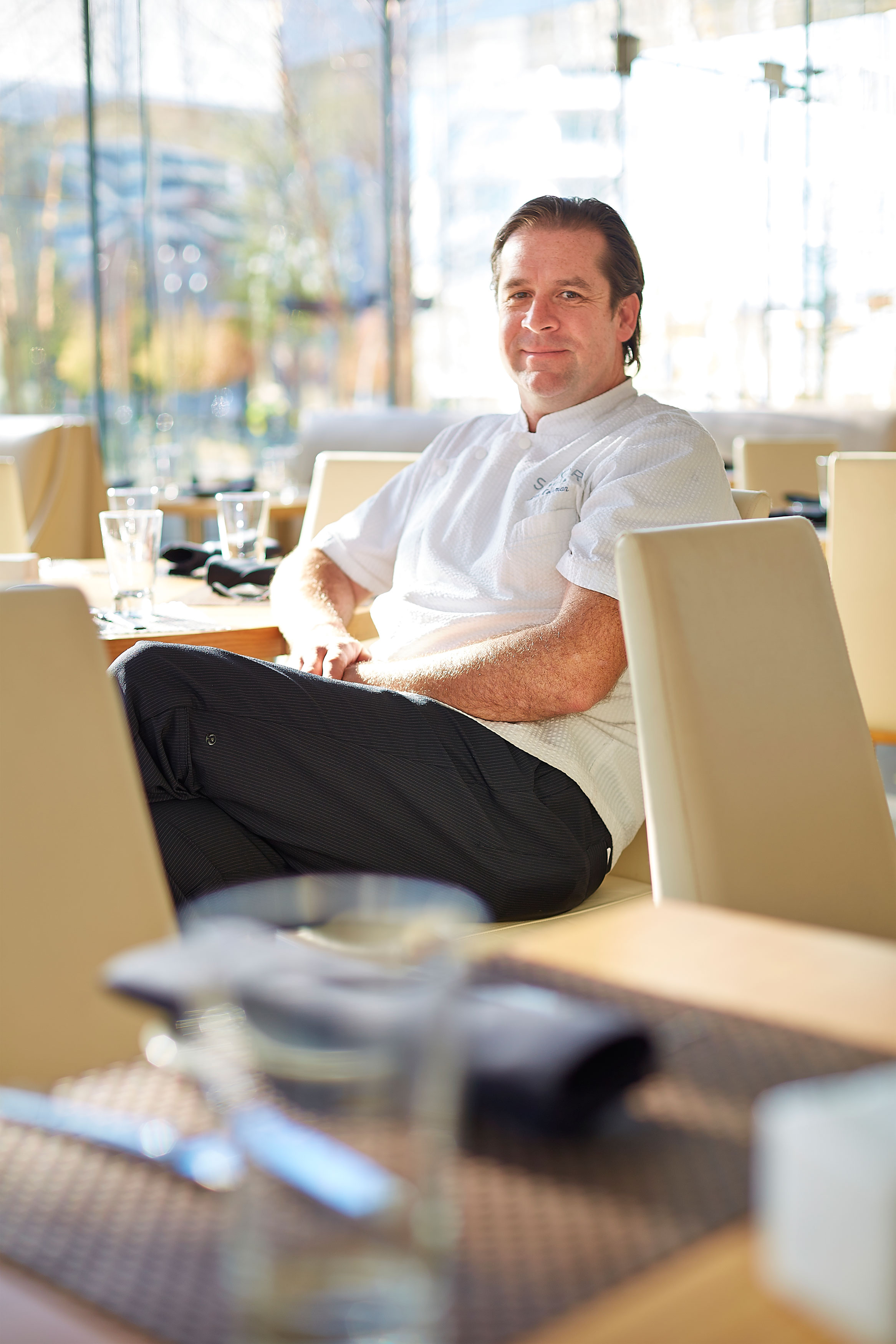 SITTING PRETTY: Chef John Coleman
The kitchen and back of the house are in the middle of the restaurant and divide the space into two areas. In the front, a kidney-shaped bar overlooks a large patio with couches and a firepit. The bar top is almost transparent and backlit with soft white lighting. The edges are wrapped with brown leather. The back section features a chef’s table, which sits in front of the exhibition kitchen and overlooks a smaller patio that is open to the sky.

Savor is more than a restaurant. They’ve installed power, water, and gas hookups to the side of the building facing the park. This makes it easy to cater special events: just pop up a tent and run lines to create satellite kitchens or extra bars. Brilliant.

Go to Savor, but make a reservation. Even with one, be prepared to wait. The bar is a marvelous place to people watch. They offer 16 wines (eight red and eight white) and 12 beers, both on tap, which, to me, doesn’t qualify Savor as a true gastropub.

Muse, Coleman, and Scigliano have completed their vision of creating a sense of community. Savor is a classy restaurant in an urban park where my niece can meet her friends and, one day, walk home to her downtown condo.