Upon entering Harvest Seasonal Kitchen, the new restaurant off McKinney’s historic Chestnut Square, the first thing you notice is a shelf where chunks of cucumber, watermelon rind, and strawberries hang suspended in mason jars. Here and elsewhere, spirits are infusing, pickles pickling. You’re seeing an ethos, not just an aesthetic. The watermelon to which those rinds belonged may have grown in a field 20 minutes away. 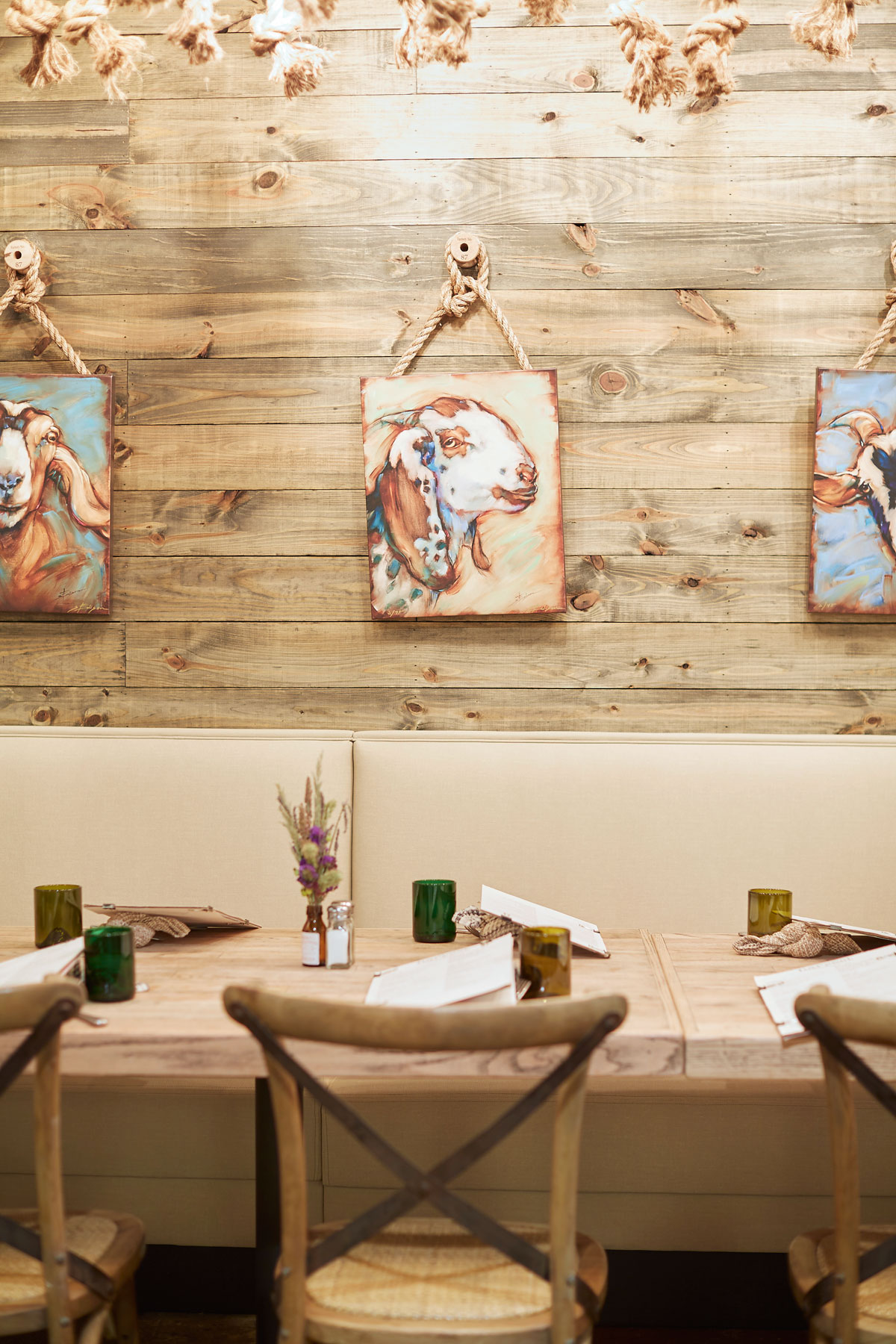 There’s a tradition of restaurants that are provincial in the best sense of the term: removed from big cities, closer to the producers and the land. Recent lists of world bests include out-of-the-way places, up fjords and across sounds, where chefs forage for wonders in the woods. Harvest stands to occupy that place in the suburbs. Andrea Shackelford is the young chef driving a farm-to-table menu on which almost all of the meat and three-quarters of the produce are local, and the list of beer, wine, and whiskey leans Texas.

Shackelford has the right credentials. She grew up in Lake Highlands, but her grandmother’s house in Houston sat on a big lot with fruit trees. Visits there were her first experience with eating what you harvest. “Mostly greens, vegetables, salads,” Shackelford says when we speak by phone. Later, she worked with Tim Bevins and Graham Dodds at Hotel ZaZa, then with Bevins at Craft. In 2008, she helped Dodds open Bolsa, whose menu was one of Dallas’ first to reflect seasons and local sources. Now she’s visiting farms, harvesting honey. “I’ve gotten inside the head of a farmer,” she says. “I’ve learned about the produce, about the seasons, the trials and tribulations. It’s humbling. A lot of people don’t realize how much time goes into that one little piece of produce.”

“I’ve gotten inside the head of a farmer,” Shackelford says. “I’ve learned about the produce, about the seasons, the trials and tribulations. It’s humbling.”

But it’s not just about bringing the best from the farm; they must transform it. The challenge: to be both the beautiful specimen and the light piercing the jar. It’s a challenge Harvest takes on, even if it doesn’t always meet it.

On our first visit, we got an auspicious start. In the best appetizers, no detail is extraneous. I was curious to see how the boudin fritters would incorporate sorrel, a tart green I deeply love and rarely see used. I expected a purée. Instead, the fritters came topped with a fresh sorrel chiffonade, whose distinctive zing complemented the sharp lemon aioli and utterly made the dish. The mixed charcuterie and cheese board had gems like a juicy salami, a nutty Veldhuizen Gruyere, and instead of the usual accoutrements—nuts, dried cherries—a fresher ensemble of pickled peppers, mustard grain, green apple, and wisps of dill. We loved everything about the deviled eggs, nestled on kale pillows and topped with pickled onion, mustard, and candied pecans. (Check for differences in the eggs—the farm-to-table reality subtly revealed.) The fried green tomatoes, meanwhile, didn’t measure up. Despite a remoulade and corona of greens, what lingered after each bite was the taste of bland batter—flour and fat. 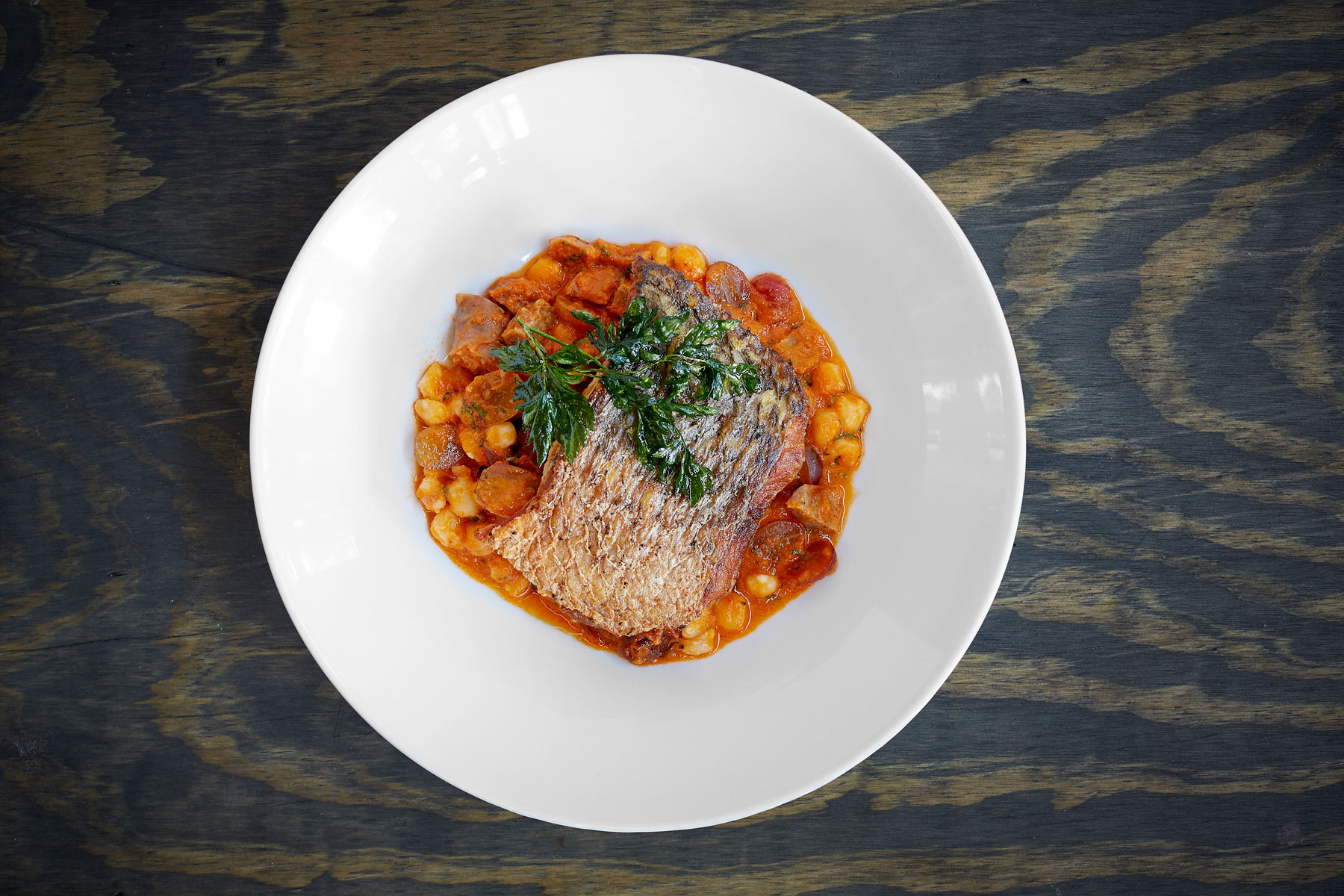 Given Shackelford’s background, I expected the salads to speak to her penchants. The Cobb was a masterpiece. Two slices of bacon, demurely crossed like folded arms, rested on some of the softest, creamiest Bibb lettuce I’ve had, accompanied by cherry tomatoes, cucumber, generous chunks carved from a block of Maytag blue, and an ethereal avocado purée. Delightful and refreshing, down to the last smear of buttermilk dressing.

She’s a fan of grains. Sometimes it works: creamy oat groats in the kale salad, a comforting underlayer to a well-balanced dish. Sometimes it doesn’t: delicately smoked grouper competed with farro that was distractingly undercooked. The worst played into beet-quinoa-blue-cheese fatigue. “I felt like I was eating something good for me, even if it didn’t have much flavor,” said a friend. The Serrano Caesar, though, proved Shackelford can make ingredients sing with a light touch.

Nowhere was this more evident than in the rib-eye, smoked over hickory to perfection. We marveled at the way deep, campfire smokiness suffused each bite, even when it was perfectly rare. The accompaniments—carrots with tarragon and subtle jalapeño heat, fingerling potatoes, béarnaise sauce, a branch of fried tarragon—formed a symphony: the smoke, the distinctness of the herbs, the slight heat, the richness. Each bite renewed the revelation, expressed a sensibility.

Another triumph: the farm egg with griddled wheat, which turns a speckled puck of glorified cream of wheat into something elegant and delicious. The wheat cake, deeply browned, is topped with an oozing sunny-side-up duck egg and bathes in a buttery sauce with pungent shiitakes. Set off with peppery baby greens, the dish is inspired. 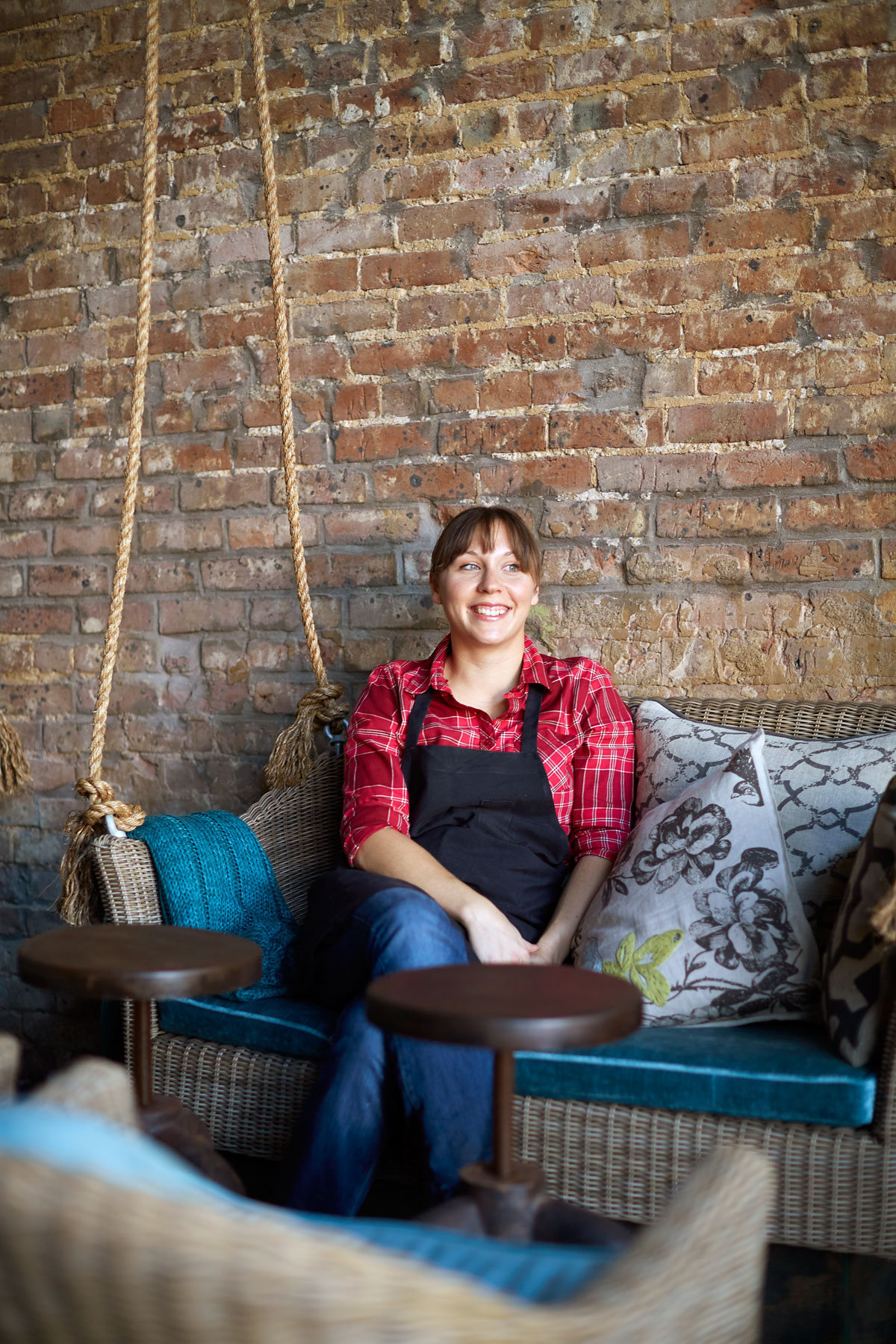 BRICK AND MULLER: Shackelford gives much thought to the provenance of her ingredients. 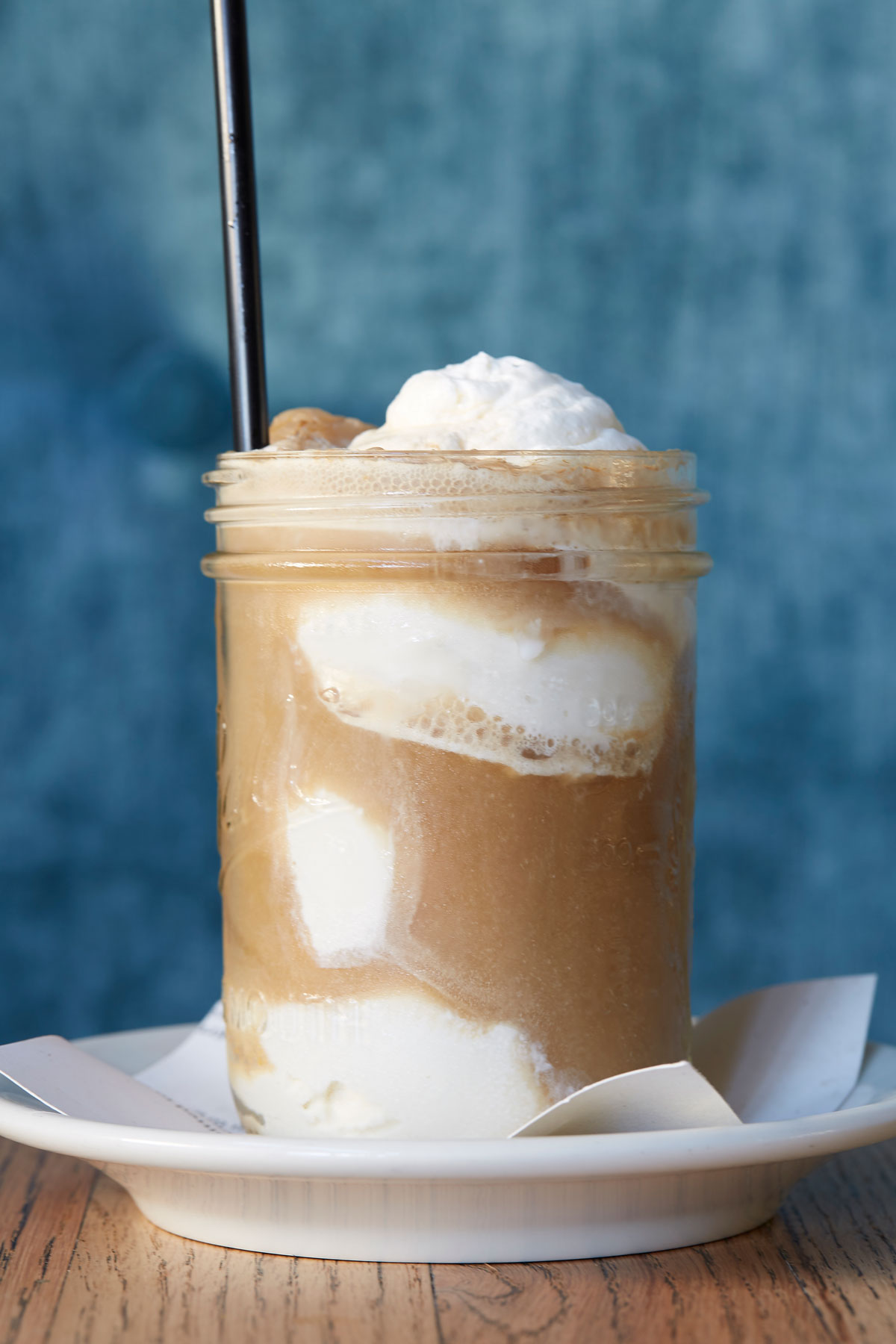 Root beer float
As for things from the sea, order the red fish, which can be boring, but not here. It came brilliantly paired with a ragout of warm, Mexican-inspired flavors in which hominy played a star role, its comforting, nutty flavor awakening a love I didn’t know I had. Sautéed grapes were the surprise, adding a beguiling sweetness.

Other dishes weren’t conceived as well. The house bratwurst fell flat. “It’s a little—” “Dry?” the waiter offered, seeming to anticipate our request for mustard. The beef belly was good, but too big a portion for something so rich; a few bites and we tapped out. The same was true of the fried half chicken, irreproachable but massive in its personal skillet. Similarly with vegetables—more from the farm is not better if it lacks finesse. Though the place clearly reveres vegetables, one entrée’s pile of garbanzo beans, cubed squash, and carrots resembled another’s mound of fall succotash. Sweet potato greens appeared in one special, sultry-silky like spinach but more pungent. They caused a few raised eyebrows at my table, but I loved getting the whole plant on the plate. (The dish came with a citrusy sweet-potato purée.) Shackelford had also done with kohlrabi what few can do—the texture was just right.

When the cooking is so simple, execution is crucial—cooking times, consistency, seasoning. Collard greens were too sweet on one visit, fine on another. A special of delicate Gulf black drum was inedibly salty. The chef-driven restaurant has its heart in the right place, but it takes a team to tend the details. The service, too, needed tuning. The staff was kind and eager to please, but at times befuddlingly slow. The pace was more country stroll than big-city bustle.

Despite errors, you feel the potential, the gravitational pull. Harvest could be that restaurant in the suburbs that draws crowds. Come here to fall in love with hominy, oat groats, underdog greens. To admire the honest-to-goodness goat-cheesiness of a lemon-goat-cheese tart. We agreed we’d drive twice as far for the rib-eye. There’s something magical, too, in the change of pace. As you go out into the night after your meal, there is the courthouse, with its round, lighted clock. Because the night is lovely and because you can, you walk around the square. Some shop doors hang askew on their hinges. Tucked into your pocket is the swatch of wildflower seed-paper they gave you as you left—so you can take the country home with you.