Entertain, for a moment, the idea that the NBA’s Dallas Mavericks had an ace up their sleeve during their fabled 2011 championship run. Listen to the then-38-year-old point guard Jason Kidd days after beating the Heat in Miami, running his jaw to ESPN Dallas: “We thought it was our secret weapon.”

Now, imagine that the folks who put that silver bullet in front of the Mavs brass had discovered “it” stuffed away in a nondescript shopping complex in North Dallas. “Nobody knew [the Mavericks] were using it,” says Mark Murdock, one of two men who introduced the NBA team to the secret weapon called whole-body cryogenic chamber therapy. “The whole time, the announcers kept saying things while they were watching the game like, ‘It looks like Jason Kidd has found the fountain of youth.’ ”

In reality, the “fountain of youth” was a vertical chamber that spits out nitrogen vapor below 200 degrees Fahrenheit, engulfing whoever’s inside for about three minutes. The person in that frigid tube is naked, except for his or her underwear and the woolen socks and gloves that keep the extremities from becoming frostbitten.

The person’s socks and gloves and underwear have to be dry, though. The American sprinter Justin Gatlin climbed into one of these chambers in 2011 and suffered frostbite on his feet due to his sweaty socks.

The technology was created in Japan in 1978 for individuals suffering from rheumatoid arthritis.

So, what exactly is whole body cryogenic (pronounced kry-o-GEN-ic) chamber therapy? “We are sending all the blood to the core for three minutes while they’re in this unit,” Murdock explains. “What we’re also doing is stripping the tissue, skin, surface tissue, and muscle tissue around the surrounding joint space of everything that causes pain and inflammation that slows recovery.”

Proponents of “cryo” therapy say it shifts a person’s post-workout recovery process into overdrive, doing in three minutes what typically takes the human body 48 hours. Its critics say it’s a waste of money, that the science to support the claims is questionable, and that people like Murdock are selling icy snake oil vapor.

Murdock and his business partner, Eric Rauscher, own Dallas-based CryoUSA, a therapeutic center boasting a pair of cryogenic chambers. Since its founding, CryoUSA has become a vendor as well, selling the Ukranian-made chambers for between $45,000 and $50,000 each. Murdock says he has sold at least 70 chambers to buyers across the country, including to 10 NBA teams. The New York Knicks, he says, have two.

The 46-year-old Murdock is wiry and fit, the result of all those rope climbs and power cleans and kettlebell swings he does in the CrossFit gym a couple times each week. Discussing CryoUSA’s brand of physical therapy, his speech speeds up, as though he’s trying to fit in as many words as he can between breaths.

When he finishes a thought, he often smiles and sums up his explainers, like this: “We are taking the process that God designed that takes 48 hours and shoving it into three minutes.”

TECHNOLOGY FROM JAPAN
Murdock first stepped into a cryo chamber in 2009. He was skeptical, he says, until hours later. Back then, he was running between 13 and 22 miles each day. He spent the remaining day “wrecked.” This time, he did his standard 13, then drove to North Dallas and got the therapy.

“I got out [of the chamber] and thought, ‘OK, my legs feel completely fresh,’” he says. Then came the doubt: “This is in my head, it’s psychosomatic. I’m not a Kool-Aid drinker, I’m very pessimistic about this.”

He had heard his friend Rauscher proselytize about getting in that odd therapy tube at the behest of his Ukranian father-in-law, who’d listened to Rauscher complain about his stiff back. The cryotherapy seemed to work. Rauscher went to work researching the business potential and found there was no such industry in the United States. Murdock, a Division II basketball coach for 17 years, started looking into the science of it.

The technology was created in Japan in 1978 for individuals suffering from rheumatoid arthritis. It’s relatively new to America, meaning stateside researchers haven’t performed many peer-reviewed studies.

European researchers, however, have delved into the technology. So far, their findings are mixed. Some discovered that cryotherapy aids recovery in the short-term, while others contend that cheaper alternatives offer similar results. (A typical session at CryoUSA costs $75.)

A German study published in 2000, which can be found on the website of the National Institutes of Health, showed that “the pain level after application of the cold therapy decreases significantly” for about 90 minutes. Long-term effects were negligible, but the study found it had a positive effect when used as part of a rehabilitation regimen.

Another study, which examined whether athletes should return to physical activity after cryotherapy, found conflicting results that prevented researchers from reaching a definite conclusion about its effectiveness.

Still another study was damning: “Until further research is available, athletes should remain cognizant that less expensive modes of cryotherapy, such as local ice pack application or cold-water immersion, offer comparable physiological and clinical effects.”

“I don’t know that the literature is strong enough to say one way or the other,” says Dr. Rebecca Stearns, the vice president of operations and director of education at the University of Connecticut’s Korey Stringer Institute, a nationally renowned program that researches ways to improve the health and safety of athletes. “We definitely need more literature in this area, and it’s going to vary case by case.”

Stearns, though, notes what many cryo users say when confronted with the varying results of those studies: If the person using it feels that he or she benefits from it and the risk level is low — which is the case with cryogenic therapy — there’s no harm in continuing to climb in the tube.

“Perceptually, if they’re convinced that it works and they can afford it and they like it and there’s no reason to think it’s giving them any negative health benefits, that might just be what works for somebody,” she says. 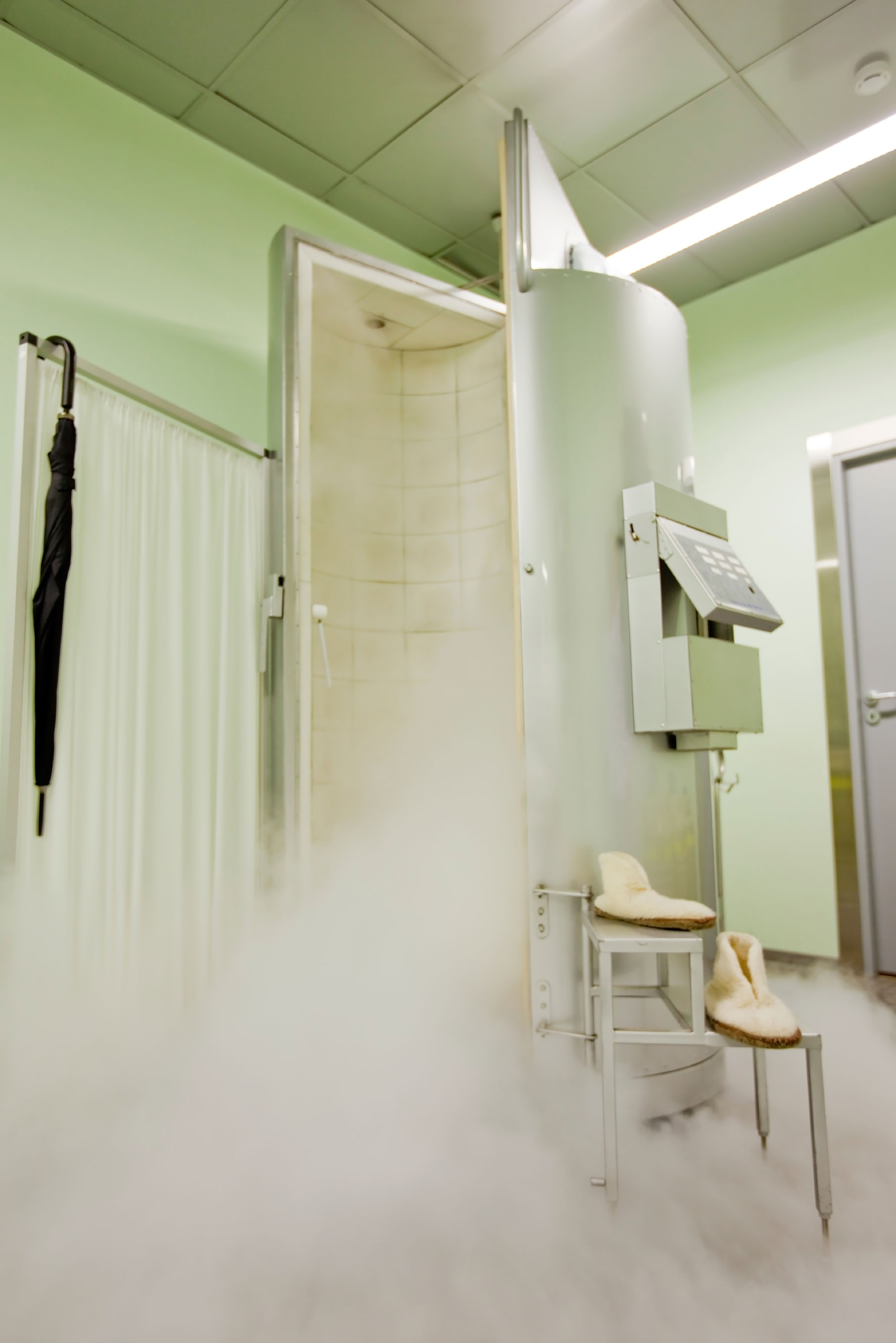 The New York Knicks training staff was in town in the fall of 2010, Smith recalls, and set up a meeting with Murdock and Rauscher, whose business was then known as Millennium Ice and located at the Shops at Willow Bend in Plano. Smith tagged along and was impressed with the presentation.

Soon, he brought a few players to try it out. “Anecdotally, they had a good report from it and they liked the way it made them feel,” Smith says. “So we incorporated that into our recovery solutions.”

It became an important part of the recovery process for Kidd, Jason Terry, and Shawn Marion, Smith says. After winning the NBA title, Rauscher snapped a photo of Terry donning a championship cap and a toothy smile in the chamber, the frigid vapor creeping up above his neck. The Mavericks began using the chambers so often that the cryo company moved from Plano to the Park Cities in Snider Plaza so the players didn’t have to drive as far.

The spread of cryogenic therapy is intrinsically linked to its stamp of approval from the Mavs. The press that followed piqued the interest of business owners, athletes, and sports trainers, and the business took off.

Athletic higher-ups at Texas Christian University, for example, took note of superstar Dirk Nowitzki undergoing the therapy and began researching the process. A booster bought the school its own cryo unit in 2012. During football season, the players will use it upwards of 120 times a week, says David Gable, the team’s head athletic trainer.

The therapy is used as part of the team’s standard post-workout recovery regimen, similar to the way ice baths are used. Gable says it’s appealing to players because of its convenience. It’s much quicker than waiting to dry off after a stint in the ice tub: “They can get in the chamber for three minutes, and then they’re on their way to dinner,” he says.

But the chamber also produced beneficial effects that Gable and his colleagues didn’t anticipate. It’s proven effective in helping athletes recover from acute injuries, for instance. Gable says the swelling on a tweaked ankle, say, is visibly lessened after a session. Combined with another recovery modality, such as electrical stimulation and a compression unit, the therapy helps “get swelling out a whole lot quicker than we were previously able to,” he says.

Tight end Stephen Bryant, a self-described “big sweller” after an injury, says he saw an immediate impact on an ankle injury he suffered last year. “Right after I got out, the swelling had gone down,” he says. “You could see it dramatically after being in there three minutes.”

Gable says the TCU kinesiology department is launching a small study on cryogenic therapy, which the football team will be a part of. He knows there needs to be more research done, but he also knows the results he’s seen. Athletes feel an endorphin rush after the therapy, and they report sleeping better at night. “I think we’re only hitting the tip of the iceberg with what this thing can do right now,” he says.

He scoffs at the assertion of one study equating the effect of cryogenic therapy to that of an ice pack. Those types of statements only illustrate the need for further research, he says. It works on an anecdotal level, he says; now it needs to be proven empirically.

“It goes back to simple science,” Gable says. “What’s occurring in your body is occurring; it would happen whether you were standing out in the cold or whatever the case may be.”

Then he pauses and sums up: “It’s a great tool to have, and we use the heck out of that thing.”