How the Lewisville Fishing Barge Is Like a Time Machine

There’s a place up I-35E that transports you 50 years into the past. Take the first exit for Lewisville Lake and find your way to a dirt lot overlooking an inlet. There, across a wooden ramp, is the floating world of the Lewisville Fishing Barge.

Inside, an old western plays on a big-screen TV behind the counter, a few feet away from a tank of bait minnows. Grady Williams is on duty. A fishing hook skewers the brim of his baseball cap. Beyond him, regulars eye their poles around the barge’s indoor wells. Williams is one of a few volunteers who run the operation around the clock, taking turns covering each of the day’s three eight-hour shifts. In exchange, they fish for free.

Shift managers are jacks-of-all-trades: inventory, maintenance, helping first-timers with tying knots. Their responsibility in a broader sense is to advance “the happiness of mankind,” a mission defined by the original owner, Joe Jagoe Sr. “That was a grandiose thought back in the ’50s,” says Ivan King, who has fished here since 1968 and started as a shift manager last April.

Then again, Jagoe’s contribution to a fisherman’s beatitude is clear. The barge he designed in 1957, two years after the lake’s creation, was—and still is—one of the largest barges of its type in North Texas, with its low-slung main building and ample walkways. The enclosed 80-by-80-foot room, with three wells, has heating and air conditioning, making it possible to fish year-round. Some weekly regulars hail from South Oak Cliff and Fort Worth. Others travel from 100 miles away. 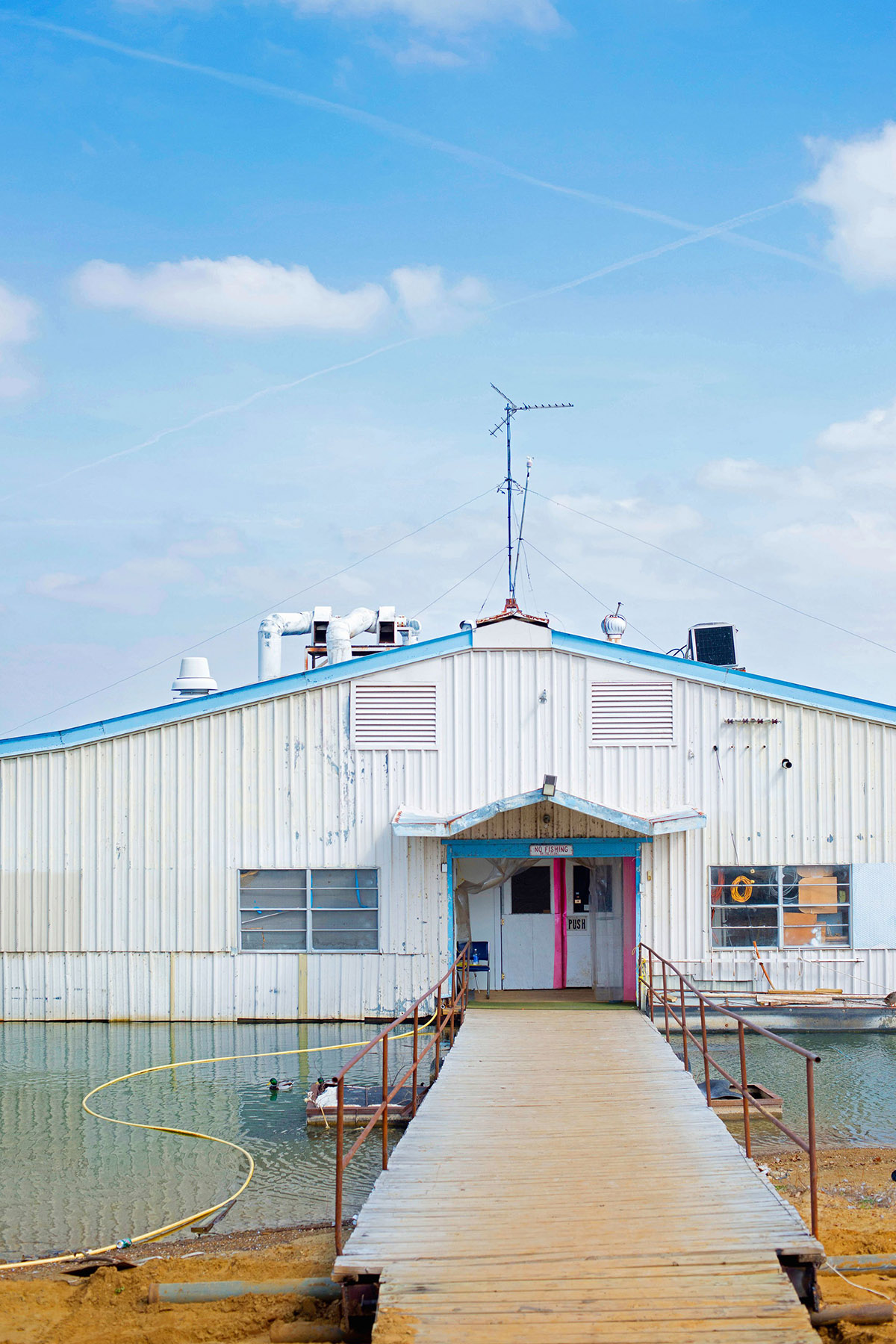 A publicity postcard from the ’60s, dug out of a drawer, captures the barge in its heyday. Its decks are handsome, its high-backed chairs popping with color. A formal dining room, in the ’50s and ’60s, served fish and steak and allegedly the best hamburgers in town. People came just to eat and watch the fishing.

Now the paint peels and the bathroom has shower curtains for stall doors. There’s a Robinson Crusoe, Lost Boys quality to this floating place, suspended between land and water, water and sky.

“You can’t find it, because it’s sitting on the water,” hidden until you’re right on top of it, King says. “It’s the best-kept secret in the county.”

Fifteen years ago, ownership shifted to Edward “Poncho” Newton, but the ethos has remained unchanged. King remembers, from his early days, the appeal of being open around the clock: “You could just come out, spend the night if you wanted to.” Parents dropped off teenagers for the weekend. Men fished for two days without sleeping. “Over time, people have developed relationships, so it’s almost like a social club,” King says.

One man points to a bulletin board of catch photos, some with curled, yellowed edges. There’s his daughter’s first big catch. Two years old, she holds a crappie he estimates at a pound and a half. He started bringing his kids “as soon as they could walk and somewhat sit still for a little while.” Another man, whose son is out of sight, says his boy likes coming because, “He gets to talk to people.”

The last few years have seen the passing of an era. Three shift managers died, two of them in their 90s. “They were fixtures. I mean they were old codgers. They had stories,” King says. “John would puff on his pipe, give a look over his glasses. Harold was kind of a clown. Big Mac was hard of hearing, talked like a megaphone, but he was the most jovial person you ever want to meet. Guys work out here a loooong time,” he says.

Over the years, the fishing has changed. Williams remembers “sand bass schooling across the whole gad-dang lake.” Now he sees it more stocked with blue catfish and hybrids, trophy fish that offer big poundage or put up a good fight. Meanwhile, he sees fewer striped bass and big perch. “The lake is down 8 to 12 feet, which affects the spawn, which affects the bite,” King says. “It’s a domino effect.”

Winters, the barge operates in the red. Summers offset the lull—somewhat. Kids come, sometimes by the campful (Boy Scouts, Cub Scouts). There might be 150 people fishing on a warm summer night.

Newton, the owner, would like to replace the nearly 60-year-old structure. “I’ve always said, whoever built this back in the ’50s was a genius,” Williams says. “During a storm, this is the place I wanna come. When you’ve got 6- and 8-foot waves bouncing around, it just sits here.” He recalls a storm last year when a rescue squad was called to save a boat. “Pretty big boat couldn’t handle the water,” he says, “but this old barge could.”

Still, Newton worries about the wear. The east wind tears into the place, sheltered as it is. His maintenance man, a regular for decades, does odd jobs, from checking and replacing cables to towing the barge. The city has declined Newton’s proposals for a new building, he says. The next storm, he worries, could damage the place beyond repair.

“When you’ve been running it that long, you can’t just quit,” Williams says. “This place has to continue. For some people, fishin’ is a little bit more than fishin’.”

Where to Find Nature in Dallas

It's there, if you know where to look.
By D Magazine
Publications

The Nature of Things