Veteran Dallas restaurateur Monica Greene was born and raised in Mexico City. She moved to Dallas in 1974 and has now been in the restaurant business for almost 40 years, scoring her biggest hits with Ciudad and Monica’s Aca y Alla. Every restaurant she has opened has borne the influence of the culinary history of her home country. “I had a privileged life in Mexico and grew up on such wonderful food,” Greene says. “The array of ingredients we use and the techniques we use are unique to our culture.”

Dallas has several grocery stores that service the Latin community. Houston-based La Michoacana Meat Market (see page 46) has more than 35 locations in the area. Fiesta Mart, also born in Houston, has 16. Both offer a variety of products from countries in Latin America, and, like American supermarkets Tom Thumb and Albertsons, La Michoacana and Fiesta sell many of the same items. People shop at one over the other based on location.

Greene and I set out to find Mexican foods like those offered in the traditional, open-air tianguis all over Mexico. “American grocery stores cannot reproduce how we shop in Mexico,” Greene says. “We don’t buy in a store. We buy in the streets. We go down to the square and hit a fruit cart, the tortilla lady, the meat man, and the colorful puesto de licuados.”

We spent a day scouring markets here in Dallas, finding the best sources for authentic Mexican products. I’m happy to report that we uncovered some culinary delights that brought tears to Greene’s eyes.

First we hit Taxco Produce. It’s a vast warehouse usually thought of as a wholesale distributor, but it is open to the public. This is the place to go if you need large quantities of ingredients, especially Mexican cheeses. Think of it as a Latin version of Costco. Here you find 5-pound bags of dried chilies (cascabel, chile de arbol, pasilla); lots of popular Mexican sweets such as peanuts marzipan-style and tamarind candy; sacks of cereal, rice, purple corn; and cases of bottled horchata. Greene grabbed a pack of Manzelazo Japanese peanuts coated with soy sauce. “This is my favorite Mexican snack,” Greene said. “Don’t tell anyone, but I can be bought with these.”

She insisted on hunting through the Fiesta Mart on Jefferson Avenue. Even though this store is part Tom Thumb, part Latin market, we found beautiful fairytale squash and loads of unusual herbs such as fresh epazote, quelites (lamb’s quarter), and verdolaga (purslane). Greene picked up a bunch of huauzontle leaves and held them to her nose. “This is hard to find,” she said. “We use it for stews and beans.” 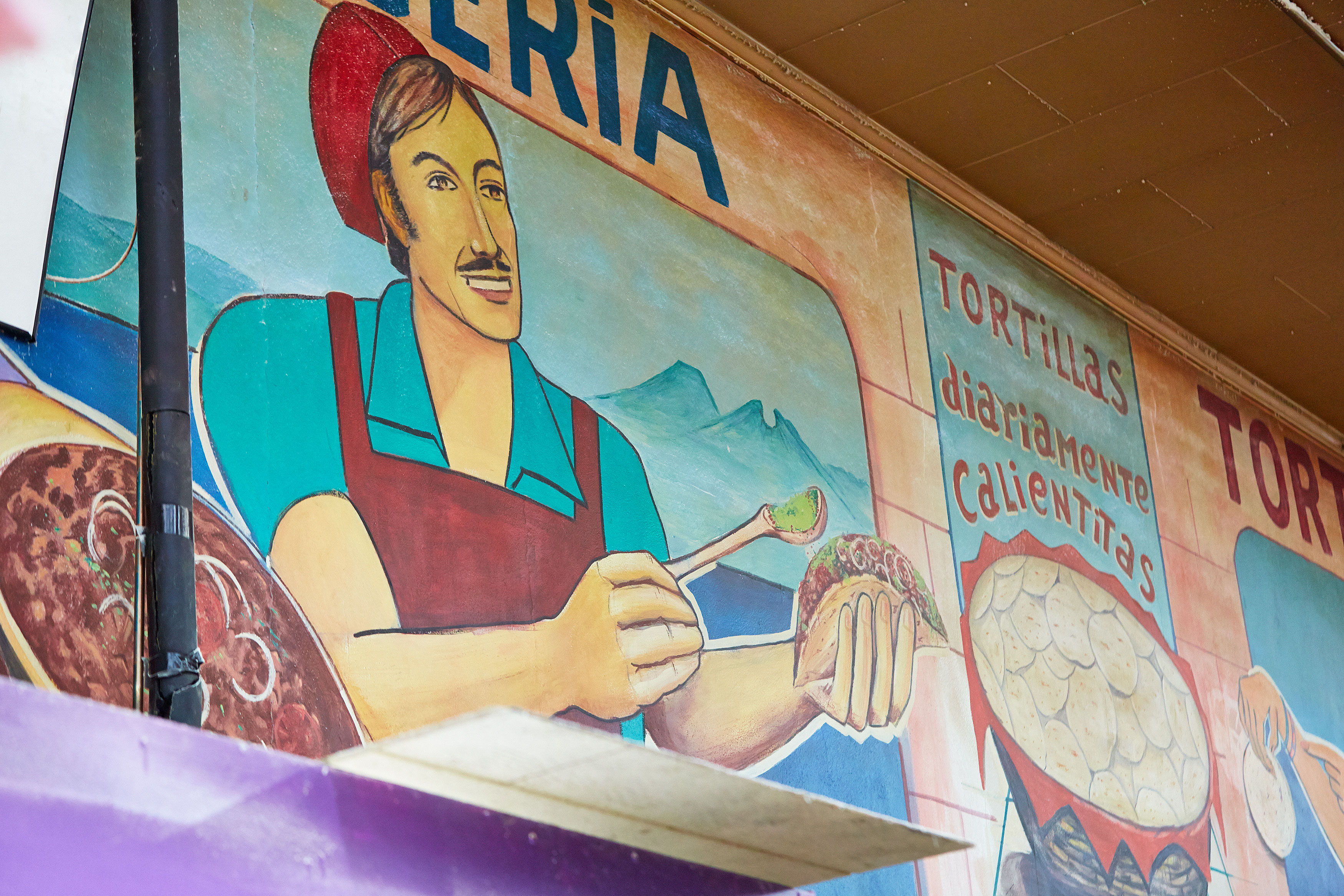 The crema section at Fiesta is impressive, but most cheeses and cremas are imported from other Latin countries. Fiesta offers Mexican queso frescos and hard cheeses, some made with pico de gallo or red and green peppers. “We make a lot of boring white cheese,” she said.

We ticked off nine varieties of bananas in the produce section and a lovely loaf of anise-flavored sweet bread in the bakery. Our only purchase, my newest addiction, was a package of El Charro Obleas con Cajeta: two 2-inch disks of thin wafers filled with cajeta. 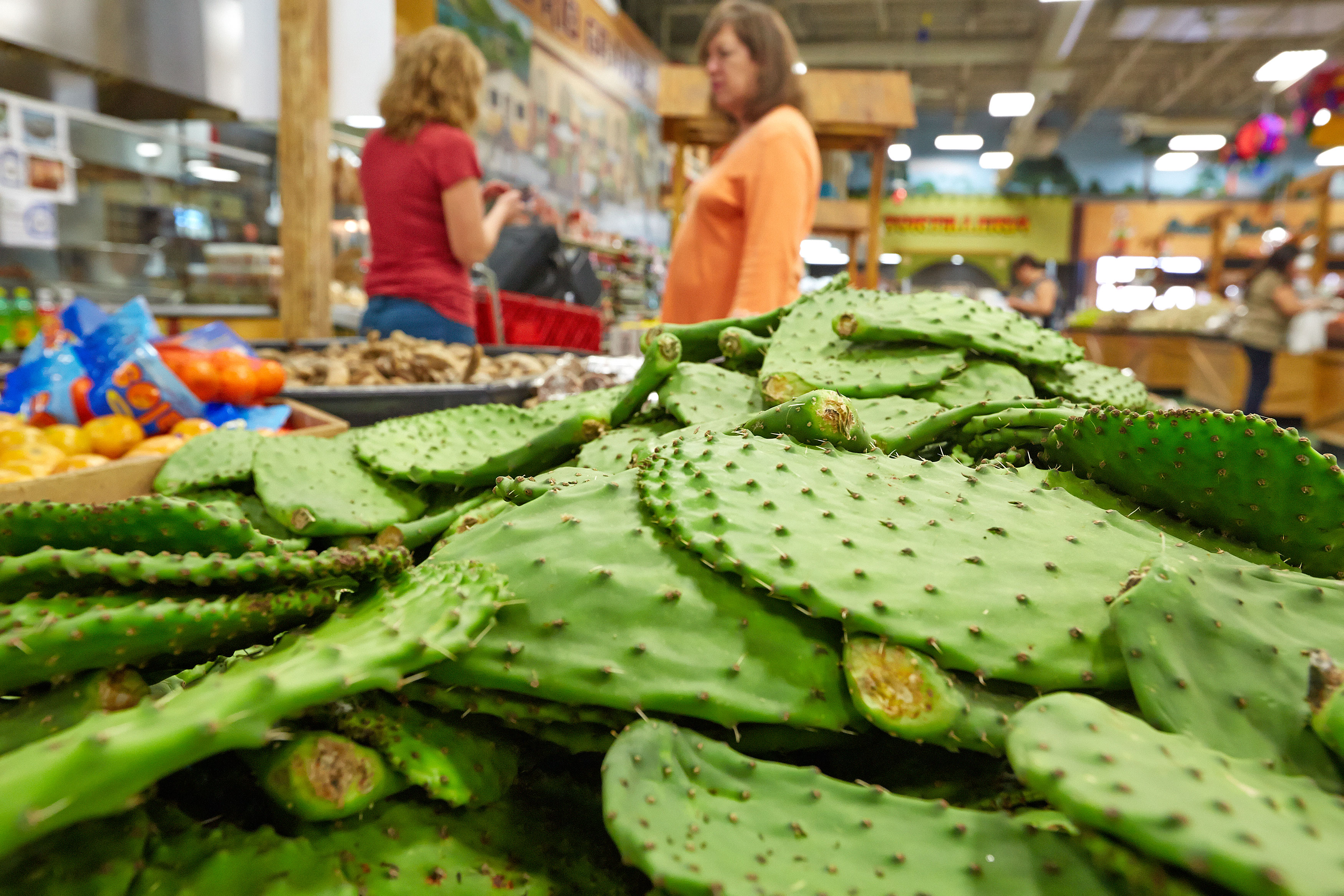 At Supermercado Monterrey, Greene headed straight to the tortilleria. She peeled off a rapid request in Spanish, and within seconds, we had hot flour tortillas in our hands. “They are trained to give you one that is still bubbling,” Greene said. “God, they are never any better than they are at this second.”

The carniceria serves outstanding chicharrones, and the dairy case has different sizes of packages of prepared masas to make tamales, tortillas, gorditas, and pupusas. Greene noted the fresh whole wheat flour tortillas, but I couldn’t be bothered. Supermercado Monterrey carries the largest and funkiest supply of “religious” candles I’ve ever seen. Light a candle to ward off evil spirits or to have better luck at Bingo or selling your house.

We whizzed through the El Rancho Supermercado on Gaston and found a few items out of the ordinary. “Oh my God, I haven’t seen this in years,” Greene said as she picked up a container of crystallized chilacayote. “It’s like squash, and the white pulp is cooked, dried, and rolled in raw sugar and spices.” 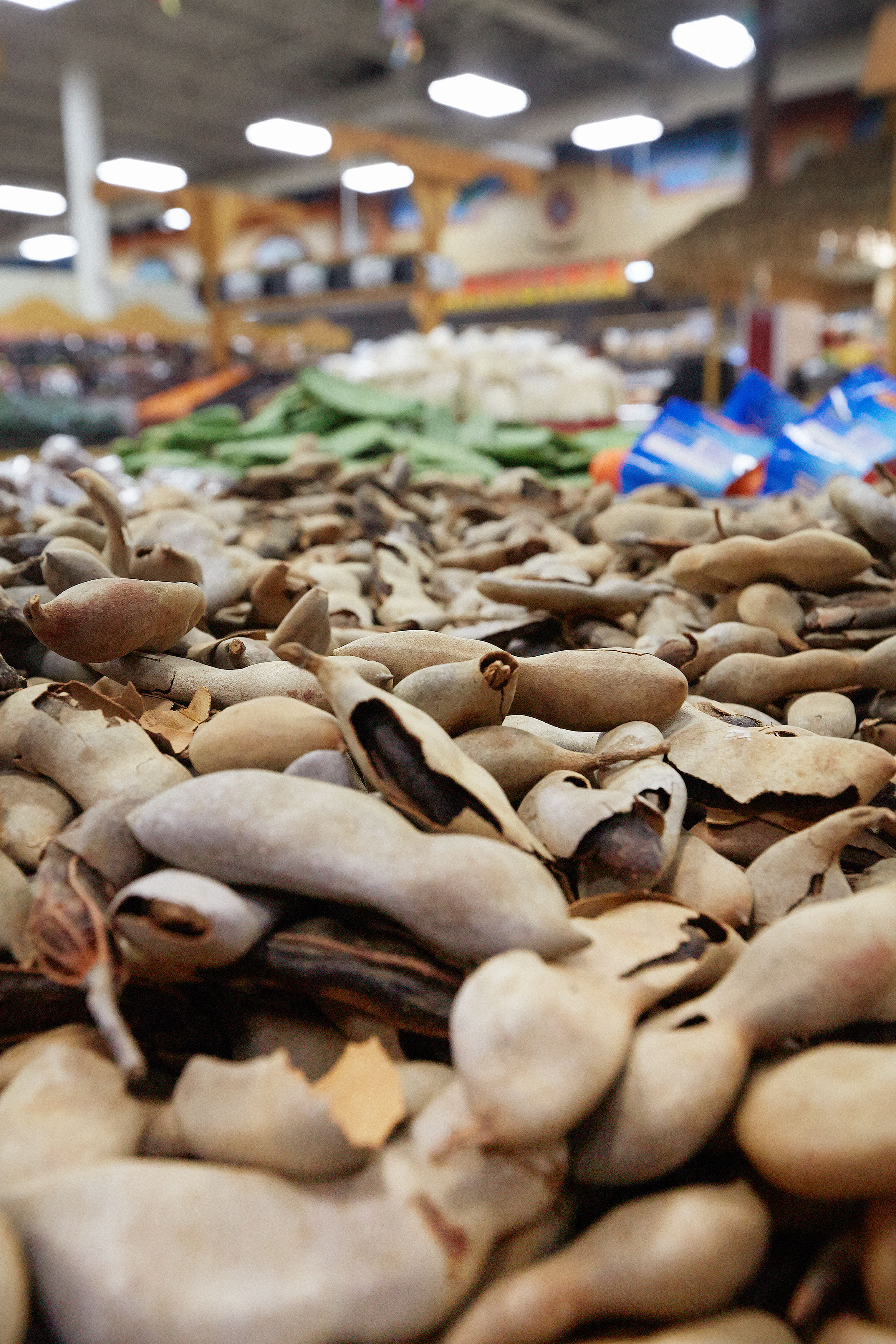 “Now I’m going to take you to a store that is purely Mexican, not Latin,” Greene said. “It’s made for us. Inside is like all of the components of market life in Mexico under one roof.” El Rio Grande Supermercado sits near the corner of Hampton Road and West Davis in Oak Cliff. Nice ladies pass out hot flour tortillas from the large tortilleria just inside the door. Greene moved to the produce section and, like a museum tour guide, picked up items, smelled them, and recited their importance to Mexican culture. She grabbed a skinned coconut and shoved it at me. “Just poke a hole in it and it’s ready to drink,” she said. “It’s only 99 cents. Take that, Whole Foods.” We passed a large barrel full of long, curled tamarind seeds. Greene stopped and ran her fingers through them and sighed. “I love this shit,” she said.

For hours, we scavenged. We sat on the floor in front of a massive array of teas and dried herbs. I got a lesson on the importance of herbal teas in the Mexican diet. “When you get sick, your mother gives you chicken soup,” Greene said. “When you get sick in Mexico, your mom will call and tell you to make a tea like cuachalalate bark to cure your ailment.” 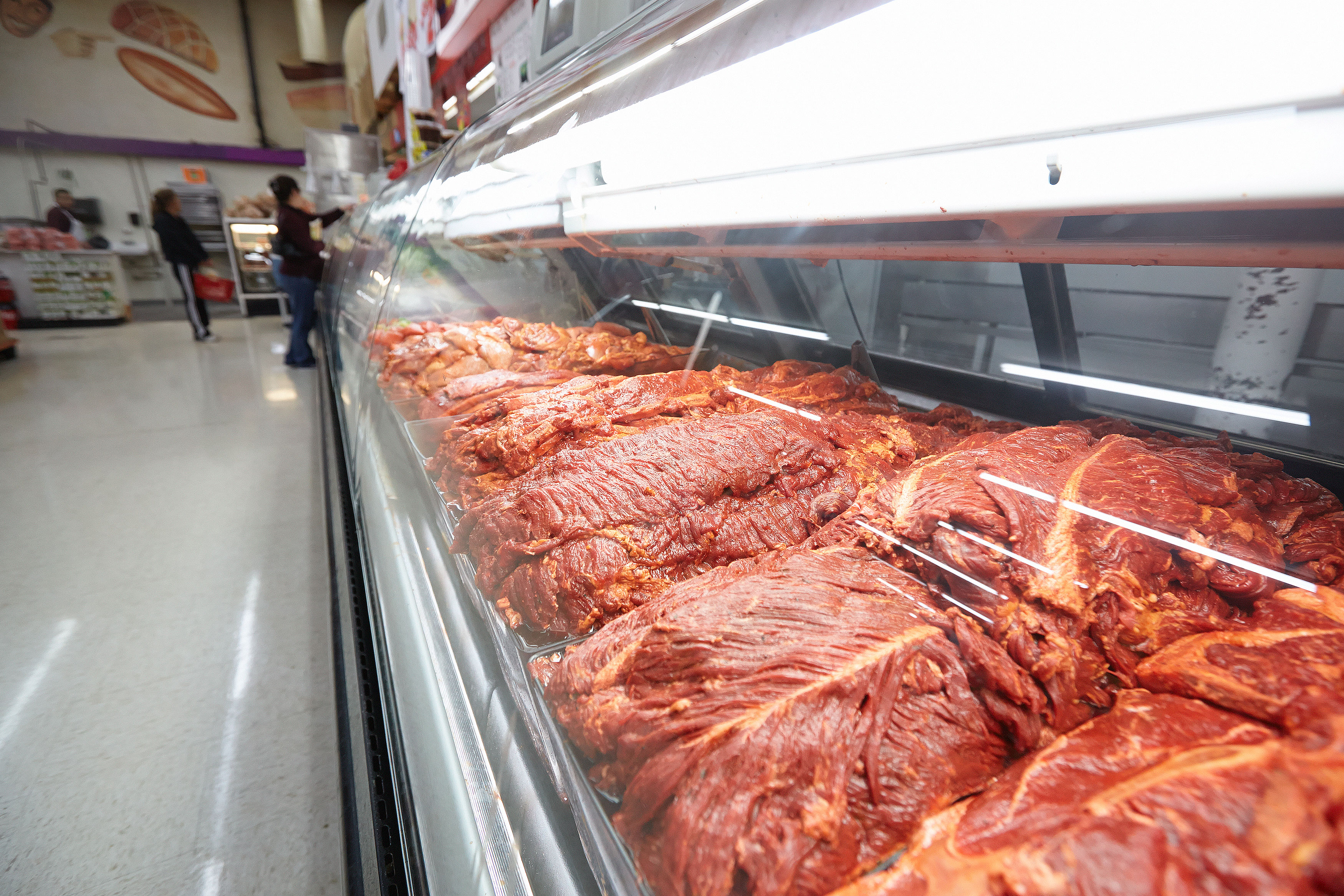 Every culinary student in Dallas should visit this carniceria to study Mexican meat. “They display the pig from right to left on purpose,” she said. “It starts with snout, ears, and lips, and goes down to the feet and tail. We use a lot of the bones you see here for flavoring caldo de res or caldo de pollo. We use cheap meats with lots of veins and fat and cook them for a long time to get them tender. We eat the necks, feet, hearts—everything except the beaks.”

Forget the Japanese peanuts, hot flour tortillas, cajeta candies, and the chicharrones. The highlight of our day of shopping came when Greene spotted a 5-gallon glass vitrolero at the indoor puesto de licuados. I’m sure you have seen a colorful display of aguas frescas, the popular Mexican beverage made from mixing fruit, flowers, nuts, or a combination of any with sugar and water. “This is remarkable,” Greene said. I had to wait for Greene to finish her lively conversation with the woman behind the glass jars. “This is fresh mamey,” Greene said with a slight tremble of excitement in her voice. “I have a hard time finding this fruit in Dallas.”

We left with a bag full of Mexican goodies and large cups filled with mamey-flavored water. Later that evening, I spread my stash out on the table. I picked up a candle that, once lit, would bring me a husband. Take that, Whole Foods.