Goodfriend Beer Garden & Burger House
You’d think any bar worth its taps could knock out a solid grilled cheese. But Goodfriend’s substantial take—made with a mix of manchego, Emmental, white cheddar, and Monterey Jack, topped with grilled onions and tomatoes, and served on challah bread—was only added to the menu earlier this year, after customers kept asking for it. We’re glad they did.

Ruthie’s Rolling Cafe
You can get a grilled cheese from this food truck in pretty much any incarnation. In addition to the five sandwiches on the menu, you can dream up your own, choosing from different breads, cheeses, meats, and other toppings (try the “slob” sauce). The most popular versions are the Boss (barbecue brisket with sharp cheddar on sourdough) and the Italian Hippy (chicken, grilled tomatoes, pesto, and mozzarella on multigrain wheat). ruthiesrollingcafe.com.

Lucky’s Cafe
We’re not exactly sure what is sleazy about Lucky’s Sleaziest, Cheesiest, Grilled Cheese in Town—maybe it’s the bacon? In any case, it has been a menu staple since the Oak Lawn restaurant opened in 1986, long before other places started dressing up the sandwich. Lucky’s makes theirs with the aforementioned bacon, along with sautéed onions, tomato, and green chilies, with cheddar and Swiss on Texas toast. 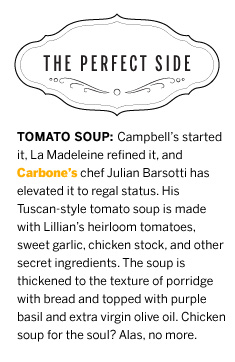 Scardello
Are you surprised you can get a fantastic grilled cheese at the finest artisanal cheese shop in town? Then you are easily surprised. The Mountaineer is one of the first Scardello added to its menu. They call it “fondue between bread”: three mountain cheeses (the base is always the Gruyère from Rolf Beeler, but the others depend on what is in their cheese case), served on thin slices of farmhouse bread from Empire Baking Company. You don’t need anything more than that.

Highland Park Old-Fashioned Soda Fountain
This institution opened in 1912, moved to its current location on Knox Street in 1923, and has been trapped in amber ever since. One thing has changed since Gretchen Minyard and Sonny Williams bought the Highland Park Soda Fountain in 2006: the addition of the Palm Beach sandwich to the menu. It’s a nice twist on the familiar: cheddar-based pimento cheese (with jalapeños or without) between two slices of white, wheat, or rye, and cooked up on the ancient griddle. Another classic.