On the other end of the line, my son was crying. It was a late Sunday afternoon last October, and Jordan was away at a military academy, in his senior year of high school. “Jacob died, Mom,” he said, sobbing. “He’s gone.”

Jordan became friends with Jacob Logan, a senior and star football player at Coppell High School, about nine years earlier, when we lived in a small apartment complex, one of the few in Coppell. Although both families eventually moved into homes and both boys found a new core group of pals at different middle schools, their friendship had remained intact.

Jordan told me 17-year-old Jacob had drowned after jumping from a cliff into Possum Kingdom Lake. It was heartbreaking to hear my son in such pain and to have him so far away. I told him I’d arrange for him to come home for a week so he could grieve with his family. And, by that, I didn’t just mean me and Jordan’s younger brother, Jon, who played freshman football for CHS. I was referring to the students and people who make up the Coppell family. That’s what people here call the community.

To an outsider, it might sound hokey to refer to an entire suburb as a family. But that’s only because if you live in a big city like Dallas, you wouldn’t guess that a place like Coppell, just up the road, could exist. There are no reasons for outsiders to come to Coppell. There are no highways that run through the town of 39,000 people. There’s no Southlake Town Square, no high-rises, not even a movie theater. Parents in Coppell don’t worry about letting their kids ride their bicycles all over town. The only time I’ve ever felt compelled to lock my front door is when we go on vacation. Whether you’re having dinner at Anamia’s or breakfast at Deliman’s Grill, you’re guaranteed to run into someone you know. The whole town turns out for the annual Fourth of July and Christmas parades along Parkway Boulevard—and for Friday night football games at Buddy Echols Field.

During the agonizing week last fall that began with Jacob’s drowning, our family grew stronger than I could have imagined possible. But it came at a high price. Two days after Jacob’s death, as Coppell was still reeling, Jonah Blackwell, another senior, took his own life. The two boys, and their deaths, were very different, but their families and friends experienced the same excruciating pain.

Mona Logan says she doesn’t remember some of the details about the days following Jacob’s death; she was struggling to grapple with the loss of her son. But one thing stands out. “If I had to use one word to describe that week, it would be ‘love,’ ” she says. “I’ve never experienced such love before. People were not only loving us, but loving each other. They were saying, ‘We’re here, whatever it takes, to support each other.’ ” 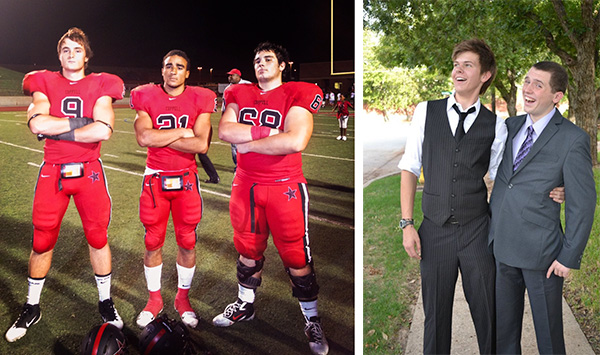 GAME ON: Josh Self, Jacob Logan, and Preston Ramsey stand Cowboy strong. Alex Riggs met Jonah Blackwell in the seventh grade, when he spotted him sitting alone at lunch.
Preston Ramsey didn’t want to go back out on the boat. He was fine just chilling on the dock at his buddy Nick Hruby’s lake house, where he and other friends from CHS were celebrating Nick’s birthday. But two of the guys, Gavin McDaniel and Jacob, had never jumped off Possum Kingdom Lake’s famous cliffs before, and they wanted to give it a try. So back out onto the water they went. Gavin and Jacob jumped into the lake and swam toward the cliffs. Preston and others hollered at them to come back for life jackets. But the two boys ignored them. Jacob told Gavin as they climbed the 60-foot cliff, “If God wants to take me, he’ll take me.”

Gavin jumped in first. He was already back in the boat when Jacob jumped. Jacob hit the water awkwardly, feet first but bent forward at the waist. “Oooh, that had to hurt,” Preston said. Still, no one on the boat was concerned.

Jacob surfaced and looked toward the sky. Then he went under again and never came back up. Preston and the others began screaming. “We were so far away,” he says. “There was nothing we could do.” The water in that part of the lake is about 60 feet deep.

That afternoon, Solomon Thomas was at home in Coppell, catching up on homework. Although he was a year younger than Jacob, the defensive end was among the many who considered Jacob his best friend. The two shared something the others did not. They both had a black father and a white mother. “We just clicked,” Solomon says. “He got me, and I got him.”

The friends started calling themselves “hybrids” and came up with a hand signal (hands facing forward, thumbs together, fingers straight up) to represent. The meme took off with CHS students. At one football game, a group of boys painted their torsos to spell “hybrid” on the front and “nation” on the back. In Coppell, a town that’s about 65 percent white, Jacob and Solomon made being biracial cool.

“He wasn’t gushy and he wouldn’t hug you, but you could always tell he loved you,” says Solomon, a top national recruit for 2014. “Even when Jacob made me mad, there was a point behind it. When we were younger, he’d say, ‘You’re no good at football. You’ll never make it at the high-school level.’ When I was a freshman, he’d say, ‘You’re too soft for varsity.’ He’d find ways to piss me off—because he knew it motivated me.”

The Friday night before that Sunday at Possum Kingdom Lake, Coppell played an away game at Hebron High School in Carrollton. Jacob went up to Solomon and said, “What’s wrong with you? You haven’t gotten any sacks all season!” The two had worked out a signature move: Solomon, after a sack, would bring his palms together and bow to the crowd. The very next play, Solomon got a sack and took his bow. “Jacob went crazy,” Solomon says. “He chest-bumped me and said, ‘That was the sickest celebration!’ He was screaming and laughing and so pumped up.”

Cam McDaniel, Gavin’s older brother, a running back at Notre Dame, was the first to reach Solomon on the phone that Sunday afternoon to give him the terrible news. “What should I do?” asked Solomon, shaken. Cam said, “Solly, pray. And just keep the faith.” The 6-foot-3, 260-pound athlete hung up the phone and fell to the floor.
As word spread, CHS students flocked to the one place they felt closest to Jacob—Buddy Echols Field, where hundreds held a prayer vigil Sunday night. 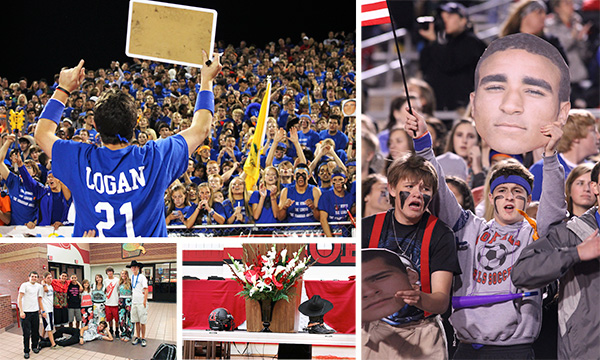 Mike Jasso was in his second year as principal at CHS. He had worked at the school as an assistant principal from 2000 to 2005 and had jumped at the opportunity to return. “The thing about Coppell that struck me then, and still strikes me now, is the total commitment by the entire community—the parents, the teachers, and the kids—to an outstanding education,” Jasso says. “There aren’t a lot of places left like this.”

Jasso called a meeting with staff before school that Monday morning. He knew it would be difficult for everyone to make it through the day. The students would need a lot of support, but the teachers were hurting, too.

The hallways were filled with an eerie silence. Music played, but the normally boisterous students—nearly 3,000 at CHS—were quiet. “Seeing the pain on their faces—it was almost unbearable,” says teacher Chase Wofford, the school’s student newspaper adviser.

Over at the field house, Joe McBride was trying to pull it together. He had rushed out to Possum Kingdom Lake on Sunday to be with Jacob’s family and the students who were there. Now it was time to meet with his team. A standout linebacker and defensive end at Texas Tech, McBride had taken the helm of Coppell’s football program in 2009, lured by