Nineteen klicks east of Denton, I’m hanging out of an airborne helo, my weapon at the ready. I’m told there are four al-Qaida operatives holed up in a nearby hotel, and it’s been left to me to “dispatch” them. As our Robinson R44 swoops around to make a pass, I notice each of my targets is standing clearly visible before a window, just waiting for me to rain hellfire down upon them from on high. The officer signals me to engage the enemy as our pilot settles the craft to hover midair about 40 yards away.

I raise the AR-15 .223-caliber semiautomatic assault rifle, peer through the sight, and settle the red dot on the head of one of the vaguely human outlines, aiming just slightly to the left to compensate for the helicopter’s forward drift. I pull the trigger, and the target drops, but there’s no time to celebrate. I’ve got three others to take down and 29 more rounds in the magazine.

How far I’ve come in just a few hours. That morning I’d driven into a gravel lot just off a back road north of U.S. 380, having previously had only a few minor experiences with firearms. Yet here I was engaging in a full-on air assault on a series of targets spread across an open field, firing a deadly weapon with astonishing (to me, at any rate) accuracy, and vying against only one remaining competitor to be named the day’s champion.

Helicopter Sniper Adventures provides a chance to live out what I’ve been told more than once is a bucket-list item for many gun enthusiasts: shooting targets from an aircraft. Dan Claassen, whose primary business is operating helicopter rentals and tours, launched this new venture earlier in the year to provide more convenient access to this peculiar dream that’s usually only available at some remote hunting ranch. The cost to participants—which provides training, and the use of a weapon (bring your own ammunition), and guarantees at least two approximately 10-minute helicopter trips through the range—is $795.

The operation garnered widespread media attention in June after WFAA Channel 8 reported on the concerns of neighbors of the 50-acre property where the action takes place in unincorporated Denton County. These people were understandably apprehensive about the idea of bullets being fired from above so near their homes, but Claassen insists the range is distant enough not to pose a threat. Upon hearing about the controversy, I wrote on D Magazine’s FrontBurner blog that the chance to pretend to be a helicopter sniper for a day seemed both pretty stupid and pretty awesome.

Shortly thereafter, Claassen called to invite me to try it myself. Curious to meet the sort of people drawn to such a recreational activity, I trekked north on a relatively temperate Saturday morning in July. Claassen, a tall, gregarious man, greeted me as soon as I climbed out of my car. He was outfitted in a zip-up flight suit and quickly ushered me to a table to sign the necessary liability waivers. There were to have been eight men participating in the day’s mission, but last-minute cancellations left only me and two others. So the staff outnumbered the customers, with Claassen, the pilot, and several “safety officers”—to train us in weapon safety and helicopter procedures—on hand. The dress among our group was just what you’d expect for a pseudo-military operation: black, and camouflage, and cargo shorts, and camouflage cargo shorts. 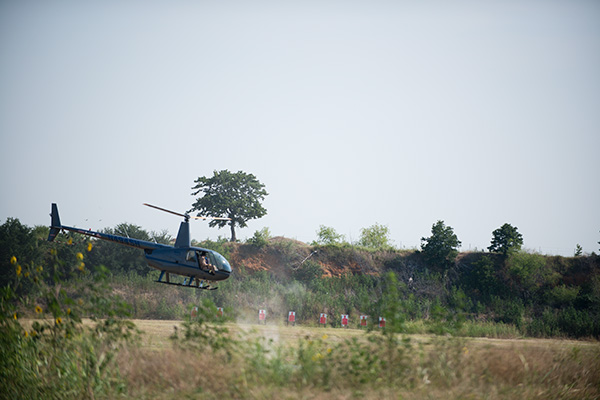 HARD TARGET: For $795, you, too, can go up in a helicopter and practice your gun skills.
A reporter wasn’t exactly a welcome presence for the two men who’d paid for the day’s adventure. One—dressed in camo pants, an NRA cap, and a Johnny Cash t-shirt—asked not to be identified because he works in “the left-leaning coffee business” and his customers might not appreciate his gun-loving hobby. The other, a mechanic named Kent, asked that I not mention his last name because he, too, works “with some pretty big liberals.” Both of them, Johnny Cash and Kent, were younger and fitter than the beer-bellied, middle-aged, stereotypical buck hunter from the suburbs I’d imagined meeting.

Gun hobbyists consider themselves a community under siege, a fact driven home by spending a morning among one small segment of their tribe. There was a lot of talk about how the media and the political left paint them as dangerous because of their love of shooting sports. Two different sets of fathers and sons showed up at the range just to watch us and the helicopter in action, and it was clear that these men believed themselves to be passing on a great tradition, an important life skill, not so different from a businessman teaching his kids to love golf.

And, aside from when we tilted slightly sideways on liftoff so that I’d have fallen out of the wide-open craft if not for the harness attached to my back, shooting bullets from a helicopter didn’t seem any more dangerous than a round of golf. (Indeed, in terms of thrills per minute, it makes a good deal more sense than does the appeal of golf.)

My instructors walked me through each step of the process, even loading and prepping the rifle for me due to my inexperience. They strictly enforced the safety procedures, with constant reminders like the need to keep the muzzle of the weapon down except for when they gave the okay to fire. Though the AR-15 looks like a badass weapon and is a semiautomatic version of the standard-issue rifle of the U.S. armed forces, it has no more kick to it than the simple wooden .22 I shot as a Boy Scout.

Of course, with 30 bullets at the ready, I could do more damage without reloading than I could at summer camp. Last year, James Holmes in Aurora and Adam Lanza in Newtown used AR-15-style semiautomatic rifles to inflict horrific damage. It’s so strange to think of that, and of how AR-15s were restricted by the Federal Assault Weapons Ban of 1994 (which expired in 2004), after you’ve been lost in the pure excitement of using one to nail a steel target from the unsteady perch of a helicopter.

I felt quite distant from the version of myself who had argued with a gun-loving friend just a few months before that the government has every right to ban high-capacity magazines. “Why does anyone ever need that many bullets at once?” I remember saying.

Now, I better understood those with an opposing view. On that day, I was one of them. We had no desire to hurt anyone. We were simply a bunch of guys getting satisfaction from challenging ourselves to improve a skill that involves a deadly weapon. I mean, in the wrong hands a golf club can be a deadly weapon, too, right? Don’t tread on us.

We were just having fun, especially me, since I wasn’t burdened by any expectation of performance. Johnny Cash and Kent, both true gun enthusiasts, had some hope of competing for the day’s prize: a cheap little metal trophy that Claassen had brought to give to the Top Helicopter Sniper of the day. I knew I’d leave satisfied as long as I hit a single target (a goal I achieved easily).

Claassen announced at the outset that the top two scorers on the course would go head-to-head for the title. I finished a distant third, but shockingly found myself in the finals anyway because Kent had to leave early to pose for a family portrait. My competitive juices kicked in. I couldn’t resist the fantasy of driving home with that trophy in the passenger seat.

The champion would be whichever of us could knock down the four targets of the hotel station with the fewest rounds. There was talk of granting me a handicap, a two-bullet advantage, but Johnny Cash wouldn’t accept those terms. He wanted that trophy, too. He climbed into the helicopter with a video camera strapped to a helmet on his head to record his effort, and I figured all was lost when he finished with just six bullets.

Now that winning seemed so far out of reach, I only hoped to hit all the targets before I’d emptied the gun’s 30-round magazine. After I’d fired my first bullet with success, I turned my aim to the second target. Fired, didn’t think I’d hit it, and fired again. Getting flustered now, I moved to the third target and fired, then fired again. I was feeling hopeless, until I heard the instructor’s shocking announcement through my headset.

In disbelief, I took my eye away from the sight and peered around the rifle. Sure enough, I’d gotten three-quarters of the way finished without even realizing it. And so I focused on that final objective. I fired and missed. Took a breath, aimed once more, fired.

“You got it!” the instructor announced, signaling the pilot to take us back in.

I’d downed the four targets in just seven bullets, falling one shy of being able to pretend I was the day’s co-champion. That is painfully close. Maybe next time I could do even better. All I need is a little more practice.