Remember dinner reservations? I hope so because, once again, you need them. Over the last 12 months, fine dining has made a remarkable comeback. Octopus, pork belly, and charcuterie with stunning, dramatic presentations are de rigueur. Newcomers such as FT33, Spoon, Belly & Trumpet, and Lark on the Park are booming with diners loosening their previously tightened belts. Wine prices are up, and nobody seems to notice. Or care.

The well-heeled customers who cram into the recently opened Le Bilboquet in Travis Walk are not paying attention to anything but the merrymaking going on around them. Every night, the small, 55-seat space fills with regulars who don designer duds to dine. Le Bilboquet is Highland Park’s new neighborhood restaurant and, baby, they are partying like it’s 1986.

That’s when the first Le Bilboquet opened on Manhattan’s Upper East Side. For more than two decades, the 38-seat restaurant was the rage. Bono, Lenny Kravitz, and Eric Clapton noshed on the bistro’s American-friendly French food. The fashionable spot lost its lease late last year and closed on New Year’s Eve. (It has since reopened on 60th between Madison and Park avenues; Clapton is one of the investors.)

Stephane Courseau, a manager at Le Bilboquet off and on from 1987 to 2000, moved to Dallas two and a half years ago. He and Le Bilboquet owner Philippe Delgrange are close friends and have often discussed opening other locations. Until Courseau landed in Dallas, the duo hadn’t found the right real estate. Courseau corralled a local group of the restaurant’s fans as investors and joined forces with Le Bilboquet alumnus Laurent Lesort, who is now the managing partner at the restaurant. Delgrange not only gave them his blessing but also allowed them to hire longtime chef “Momo” Sow, who willingly packed up his knives, ring molds, and family, and moved to Dallas. 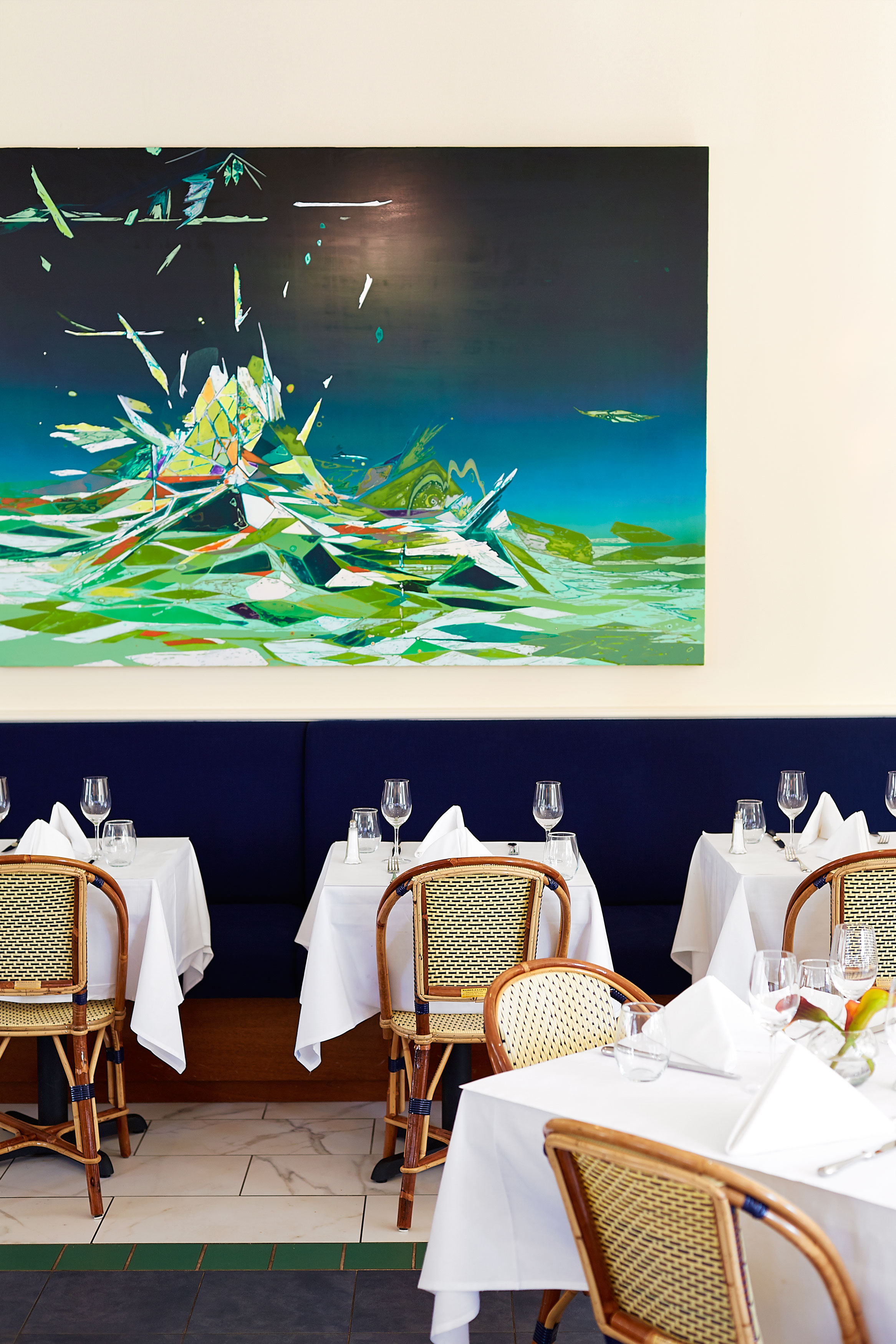 They took over the space vacated by L’Ancestral, the 29-year-old French restaurant that, ironically, also closed on New Year’s Eve because the landlord refused to extend the lease. Courseau and Lesort hired a demolition crew and gutted the interior, replaced the electrical wiring, and painted the room a creamy eggshell white. They supplied the contractors with photographs of the interior of Le Bilboquet in New York and re-created it right down to the elegant pewter bar where bottles of Champagne, French white wine, and rosé rest on ice in a grand sterling-silver bowl.

White tablecloths covered (annoyingly) with butcher block paper and set with white Oneida porcelain plates create clean sight lines. The only pop of color is provided by a splashy, bright blue-and-green oil painting by a New York artist (not a $400,000 Matisse as several food blogs have reported). Woven rattan bistro chairs scream French bistro, but the food does not. “I think for most people, we are a French restaurant,” Lesort says. “Originally, the people in New York did a bistro where American people could feel comfortable.”

I understand food nostalgia and the longing to go back and re-experience a familiar taste, but what I cannot comprehend is the fact that Courseau and Lesort decided to produce the same 27-year-old menu. Why not give the in-the-know customers some of the familiar favorites and tempt the rest of us with more innovative items? Many of us have been to France. We don’t need guacamole, risotto, and veal scaloppine to lure us in to try a fancy plate of foie gras. We’re hungry for fancy French food.

I giggled at the presentations. They caused flashbacks to the ridiculous tall-food trend of the late 1990s.

Still, I can live with the outdated menu, but I cannot tolerate the inconsistency in the food and the poorly trained service staff. On three of my four visits, I arrived with two other women. We were led across the tile floor of a nearly vacant dining room to a four-top about 10 feet from the kitchen door. The crowd was sparse because it was early. I couldn’t make a reservation later than 6:15 pm.

From my seat in Siberia, I got glimpses of the goings-on in the kitchen each time a door opened. I also watched Lesort work the room. What a friendly guy: he shook the hands of customers at the front door and visited all of the tables. Unless you count mine.

The first time I dined, I brought along a 36-year-old male food snob who wore a tie. We were seated at a two-top overlooking the patio. We ordered the waiter-recommended signature items: crab and guacamole salad, salmon tartare, steak au poivre, and Le Poulet Cajun chicken. The crab appetizer was formed in a ring mold. The towering pile of crab was crowned with a cone-shaped cap of thin onion rings and surrounded by dabs and drizzles of green basil pesto oil. The round, loosely bound stack of diced salmon rested on sliced cucumber and was served with toasted crusty Empire Baking Company bread and orange slices. I giggled at the presentations. They caused flashbacks to the ridiculous tall-food trend of the late 1990s. The crab was fresh; the guacamole was fine. Both were passable, average fare. The combined cost for the appetizers? $34. 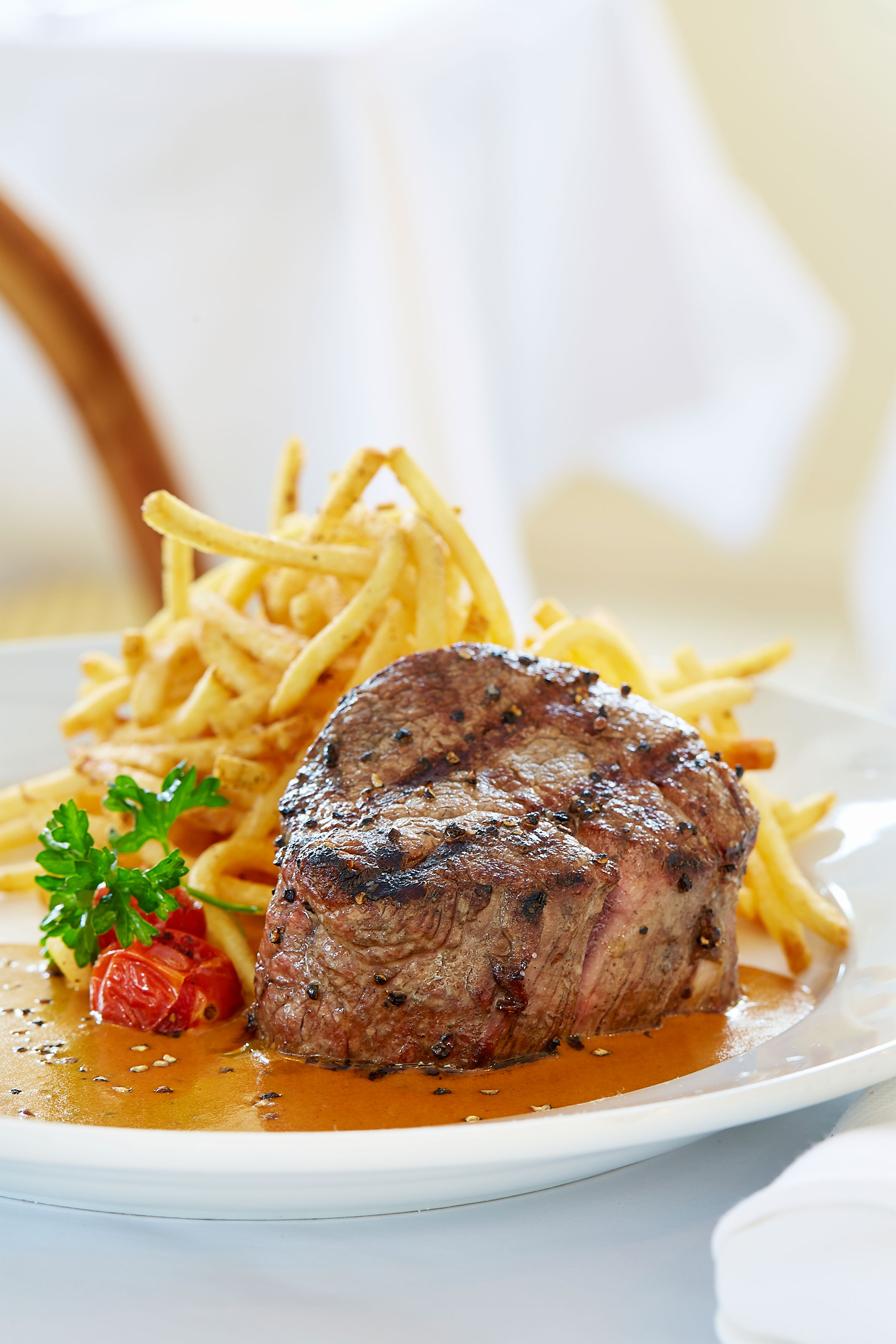 Steak au poivre
Le Poulet Cajun, the most popular dish at Le Bilboquet, was equally ho-hum. The generous portion of two chicken breasts dredged in Cajun spices, pan-seared, and cut into disks was slightly enhanced by beurre blanc and diced tomatoes. A grilled filet mignon ordered medium-rare was just so, but the au poivre sauce was overbearing. I love pepper, but I value the existence of my taste buds too much to risk burning them off with a hot cracked-pepper reduction. Overall, the experience was nothing unique—not what one should expect to feel after dropping $250, which included a $50 bottle of wine and tip, for dinner.

I wish I’d hired a film crew to accompany me on my next three adventures to Le Bilboquet. The resulting footage would rival any food-related reality TV show. A pompous waiter approached the table, put both fists on his hips, and asked, “Hey, ladies. How’s it going?” We peppered him with questions, and when he did not know the answers, he made them up. “The wagyu is from Japan.” (Fact check: Texas.) “The French fries are not frozen, they are made right here.” (Fact check: frozen.) When I asked him if the ice cream they serve with the tarte Tatin was local, he said, “Yeah, I guess you can say it’s local. We get it from the Highland Park Pharmacy.”

The bar makes a delightful Kir Royale. As we sipped ours, I asked for the wine list. “Oh, you mean you want a whole bottle of wine?” I did not think that was an unreasonable request considering there were three of us at the table. Twenty-eight minutes later, he returned with a skimpy, hodgepodge collection consisting of some of the greatest hits of the late ’90s and early 2000s. I found some old-school classics such as a Pauillac de Lynch-Bages, a mislabeled “Henderson Valley” California Chardonnay (it’s Anderson), and a timeless Sauvignon Blanc produced by Patient Cottat (spelled Cotat on the menu) in Sancerre. The answer to why they bother to offer a 2005 Chapelle d’Ausone Saint-Émilion Grand Cru ($450) alongside a Murphy-Goode Merlot ($33) was answered, unknowingly, by the waiter’s sales pitch. “Ladies, are you interested in a Cabernet or a Chardonnay?” 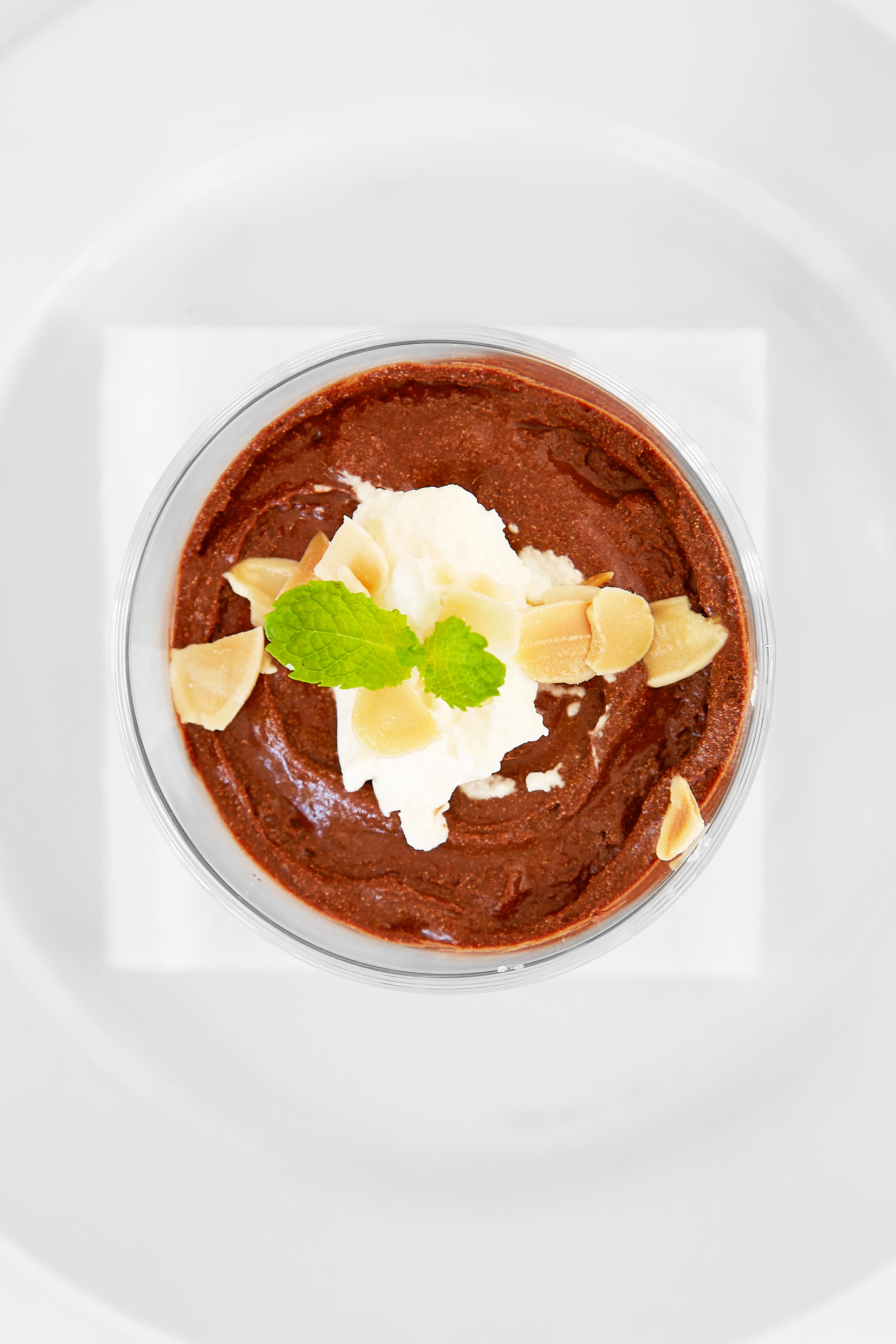 chocolate mousse
In hindsight, the next two hours were laughable. With one exception: the cold lentil salad I ordered was old and reeked of the distinctive odor of a urinal cake. Once I cut into the dark (round!) disk of lentils the sickly sweet ammonia smell hit my nostrils harder than a Rocky Marciano right hook. I was afraid to eat it. After two bites, I asked them to pack it up. My stomach was sour for the next 48 hours.

he foie gras was cold, and the color was odd. The center was rosy pink, and the edges were a pasty gray. When you put foie gras in your mouth, it is meant to melt like butter and make you feel like singing the French national anthem. We let it sit for half an hour and never experienced a rich, delicate liver flavor. However, we did detect the taste of other dishes stored in the walk-in refrigerator.

The wagyu 12-ounce rib-eye from Japan—oops, I mean East Texas—was the most impressive dish. Unlike the foie gras, the meat melted in the mouth.

I’m happy to see steak tartare emerging on local menus, especially on an almost-French menu. When the server set down a plate with a round mound of raw meat topped with sprigs of parsley, I gasped. It was unusually red. It looked like someone had mixed the spices and meat with a cup of ketchup. I took a bite. And spit it in my napkin.

Fearing the meat was past its prime, we flagged down a server and sent it back. Almost immediately, a lovely French man appeared. I told him I thought the meat was “off.” He whisked it away and returned promptly. “I tasted it, and there is nothing wrong with it,” he said. “It doesn’t matter if you don’t like it, it’s fine. I tasted it, and you are not going to get sick. If you do, I do as well. There was a little too much ketchup in the recipe, and I told the chef to adjust it.”

We waited 26 minutes for someone to return to the table and clear the half-eaten dinner plates. Nobody bothered to check on us or refill the water and wine glasses. Finally, I stood by the door and almost tackled a busser who exited the kitchen. I asked him to find our server and bring us a check. Sometimes sitting in the worst table in the house has its benefits.