Walking the grounds of In-Sync Exotics Wildlife Rescue and Education Center in Wylie, Vicky Keahey looks into Tacoma’s home. Instead of the 400-pound Siberian tiger greeting visitors, the area sits empty, enclosed by a fence covered in ribbons, stuffed animals, and flowers. An orange sign with bold white lettering remains, listing Tacoma’s name, birth date, and rescue date. His date of death has yet to be added.

“The memorials that are on the fence are really bothering me,” Keahey says. “Every corner that you turn, there’s a memorial there. There are some cats that I’d rather not be reminded of that we lost.”

Keahey has made it her life’s mission to rescue and protect exotic cats. Essentially, to make sure they don’t die. Her 12-acre facility is outfitted to do just that. Surrounded by 85 pecan trees, it houses roofed-in cages, bathing pools, and plenty of room for her 56 exotic and 21 domestic cats to roam.

Although Keahey and her team (six full-time employees, one part-timer, and 120 volunteers) have nursed many of their rescues back to good health, they were unable to fend off the canine distemper virus that took the lives of seven cats and threatened nearly two dozen others this summer.

In her 13 years running the sanctuary, Keahey hadn’t seen anything like it.

Tahoe was 18 months old when her owners dropped her off at the vet clinic in Wylie where Keahey was working. The cougar arrived for a bath, but her owners never returned. Abandoned, Tahoe faced euthanization. Keahey couldn’t bear to see that happen, so she took the cougar home.

Three years later, Texas Parks and Wildlife Department, so impressed by how she was raising Tahoe, brought Keahey a male cougar, whom she named Ranger. Keahey didn’t have experience with big cats before Tahoe, but she was excited to raise the two. And she loved showing them off at house parties. Tahoe didn’t have front teeth (they were removed by her former owners as a safety precaution), and Ranger was pretty passive, so Keahey would let guests interact with the two, as long as she supervised. One night, a 4-year-old boy wearing shoes that lit up was standing outside Ranger’s enclosure. The cat was excited to get to the shoes. The boy was going crazy to get to the cat. Out of the corner of her eye, Keahey saw a friend open the gate to Ranger’s cage. Before she could yell, “Don’t!” the boy stepped into the enclosure, and Ranger grabbed his leg and bit him. 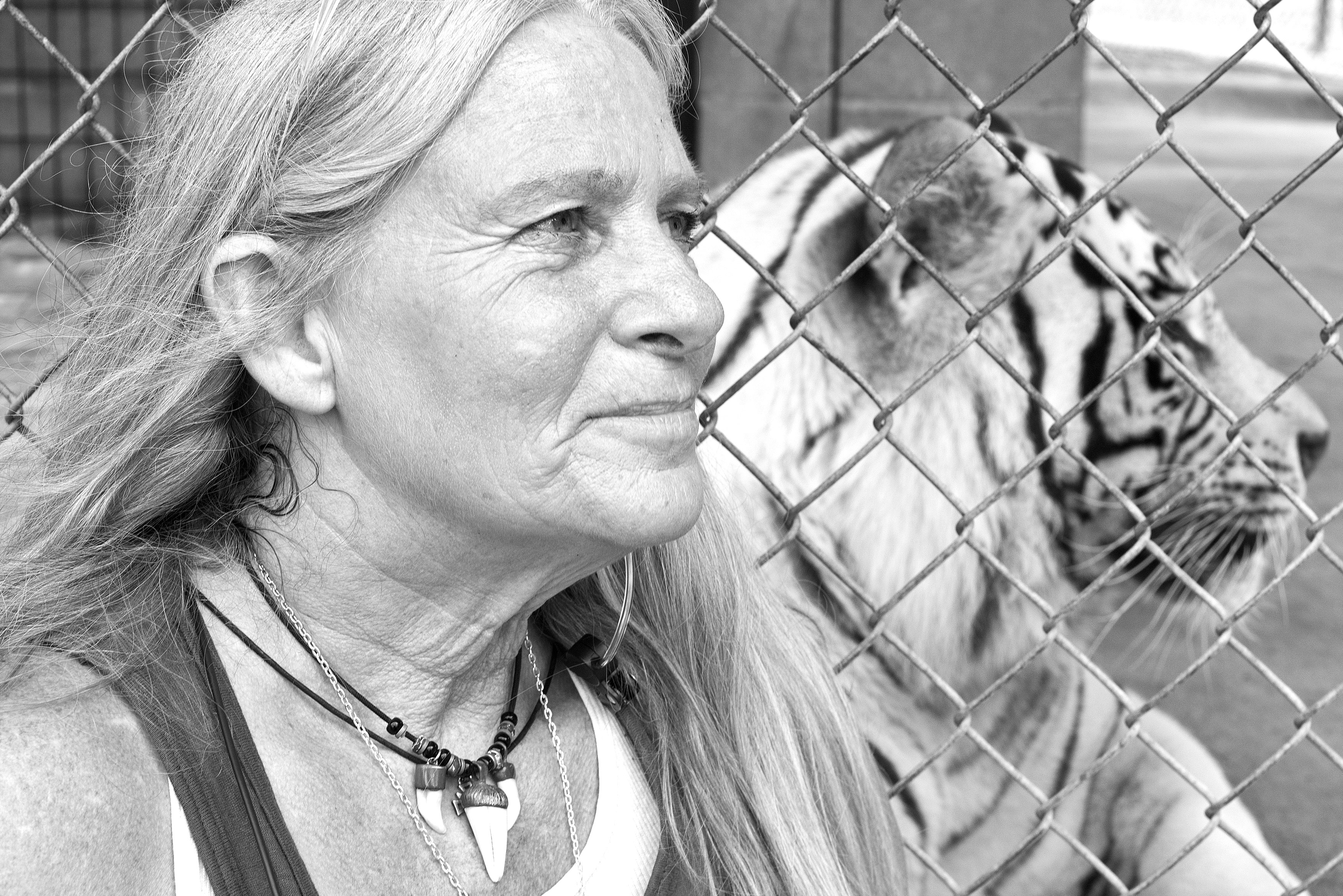 There was hardly any blood. Just three puncture wounds and a crying child. But the damage was done. The friend offered to tell people it was a dog bite so Keahey wouldn’t have to give up her cougar. Keahey knew that was a terrible idea and reported the incident. The next day, the incident  became headline news, and Keahey was forced to surrender Ranger to the Society for the Prevention of Cruelty to Animals. But they wanted Tahoe, too.

“I did everything I was supposed to do with Ranger,” Keahey says, “but when they started coming after Tahoe, it was over my dead body.” She found a rescue organization in Austin and dropped Tahoe off with $200, 80 pounds of food, and strict instructions on what the cougar could and couldn’t eat. She promised to return. When she did, two weeks later, the 120-pound cat had lost 50 pounds, and there was a maggot-covered chicken carcass in her cage. It looked like she hadn’t been cared for at all.

Keahey began making trips to Austin every other day to feed both Tahoe and Ranger (whom she got back from the SPCA after clearing a few legal hurdles). On one trip, she met a 3-week-old tiger named Kenya. The organization had plans to sell him but doubted that was possible because of hair loss. Two weeks later, Keahey paid $1,200 for Kenya and, on June 3, 1998, drove home with a screaming tiger in the back of her van.

During the ride, passing a tractor company named In-Sync Manufacturing, Keahey thought: “I can do a better job than what they’re doing. I know I can.” She liked the idea of rescuing exotic cats. She liked the name of the tractor manufacturer. Like that, In-Sync Exotics Wildlife Rescue and Education Center was born.

More than 15 years later, Keahey recounts the story in her cramped office a few yards from her home. The paneled walls are covered with framed pictures of the exotic cats and domestics Keahey has rescued since her animal sanctuary became incorporated in 2000.

Keahey’s a strong woman. A long gash runs across her right bicep, she wears a necklace with three tiger’s teeth, and her long gray hair hangs freely down her back. It’s obvious she’s spent more time outdoors than in. She’s been married for 14 years and has a 33-year-old son, but Keahey is the ultimate cat lady. She’ll laugh if you point that out, like it’s something she hasn’t heard before, but it’s true. You won’t see many photos online of her snuggling up to a cat. But there are plenty in her office and her home. “We don’t ever want to give the impression that they make good pets,” says Lisa Williams, In-Sync’s spokeswoman. “The pictures you see with Vicky and the cats aren’t photo ops. They’re family pictures.”

The cats lead a life Keahey would love to have: no worries about diseases, no financial woes. “You think of an exotic cat and how they have this awesome ability to survive in the wild without anybody taking care of them,” she says. “So then when you’re doing rescue and you think of these same animals that have this amazing ability to take complete care of themselves, and they need you and they love you, it’s just—there’s no feeling on earth like it.”

In Keahey’s living room, there are five large china cabinets, each holding urns of cats who have died at In-Sync. This year alone, 11 have been added to the cabinets (seven from the distemper outbreak; the rest from natural causes). Keahey takes the losses hard, harder than when she lost her dad 25 years ago.

On may 5, keahey noticed kiro, a bengal tiger, had a snotty nose. She gave him antibiotics, but 10 days later saw no change. During a check-in on one of her favorites, Tacoma, she heard a noise next door. It was Kiro having a seizure. She screamed over the radio for help and reached through the cage to try to calm him down. When the seizure ended, Kiro stood up and looked at Keahey. Mucus was hanging down his face, and his eyes were bloodshot and tearing up. Keahey turned to her vet, “What about canine distemper?”

Canine distemper is easily preventable in dogs with a vaccination. But for those who aren’t vaccinated, there’s only a 50 percent chance of survival once infected. A mutated version of the virus affects weasels, raccoons, and the Panthera genus (leopards, jaguars, lions, and tigers), but large cats aren’t given the canine distemper vaccination because it hasn’t been proven to be effective. A dead virus (made for ferrets) is safer, but it’s not known whether this prevents the virus in large cats. There hasn’t been much research on canine distemper in exotic cats—it would cost billions to develop a vaccine.

Although a fence protects In-Sync and the cages have roofs, raccoons still crawl around. A month prior to Kiro’s episode, Keahey noticed a raccoon having a seizure at the edge of the property. The workers removed it. But it was too late. The virus was spreading. “Before all this started, we used to come out here and feed at night, and we could hear packs of coyotes on the train tracks,” Keahey says. “About six weeks into it, we realized that we didn’t hear coyotes anymore. We don’t hear them at all.”

At the end of september, in-sync had six cats still testing positive for canine distemper. There’s no telling whether a cat can get rid of the virus entirely, or if it’ll just show up again one day. But Keahey ordered 160 vaccinations anyway.

The virus has been devastating, but there’s also been some good. “It’s raised awareness tenfold,” Keahey says. “It’s given us a lot of publicity. It’s made people more aware that we’re even here.” Vet bills have reached more than $92,000, all of which has been paid through donations. Students have started readathons and held fundraisers. News teams have visited weekly. The hope is that Keahey can raise enough to build a vet clinic on-site. She’d also like to do some research through In-Sync. Most of her days now are spent on the phone with institutions such as Boston University, Cornell University, and Tufts University, detailing, reporting, and updating researchers on her cats’ statuses.