As we checked in with the hostess, my friend turned to me and, with a thick, sarcastic drawl, whispered, “Yee. Haw.” I arched my eyebrow in agreement. It was our first reaction to celebrity chef Stephan Pyles’ new Stampede 66, a celebration of the Texas mythos in all its jingle-jangle-jingle glory. A jaded view? Perhaps. If, like me, you’ve lived in Dallas most of your life, then you’ve probably been burned by Texas-themed eateries one too many times. Most border on theme-park tackiness. 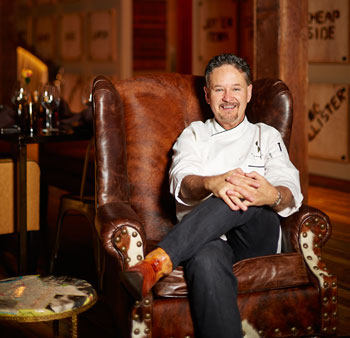 Owner Stephan Pyles Photography by Kevin Marple
Photography by Kevin Marple
I can be a bit leery when it comes to replicating the Texas mystique. It’s romantic and alluring, but it’s not really Dallas. Our city is more gleaming skyscrapers than wide-open spaces. Sure, you’ll find a few local souls into ropin’ and ridin’. But you’ll find far more into shoppin’ and brunchin’. Besides, few local restaurateurs ever get the Texas thing right. At first glance, Stampede 66 did two-step a bit too close to those well-worn cliches. Look, longhorns above the bar! Cowhide banquettes! Video of cowboys on horses!   Imagine my surprise, then, when I found myself completely charmed by Stampede 66 by the end of my first meal. The reason why it works here? Stephan Pyles. The accomplished restaurateur and fifth-generation Texan loves his home state, and it shows. Stampede 66 can be big and brash—in other words: very Texan—but it also drips with sincerity. Pyles makes those Lone Star State cliches feel playful and chic.

As the hostess escorted us through the restaurant, we walked past large tables sheltered under a tin roof. A coiled-wire rattlesnake slithered its way across the top of a long, curvy banquette. Liquid nitrogen smoke billowed around a waitress as she pushed a cart through the room making tableside margaritas.

The fashionable crowd—dressed in everything from suits and ties to jeans and boots—echoed the restaurant’s bravado and, best of all, its approachability.

That’s what I love most about Pyles’ latest creation. There’s no debating the chef’s talent. FromRouth Street Cafe to Star Canyon to his eponymous restaurant, his track record speaks for itself. But Stampede 66 is Pyles’ most accessible concept to date. He and executive chef Jon Thompson are providing Dallas the food it wants to eat: a winning mix of classic Southern cuisine and Mexican dishes, all dressed to the cowboy nines.

You’ll recognize everything on the menu. My first taste was one of my all-time favorites: fried green tomatoes. A tower of crunchy, tart, unripe tomato slices alternated with slightly gooey mozzarella from Deep Ellum’s Mozzarella Company, accompanied by pickled peppers and chow-chow foam. We followed that with two home-cooking classics: meatloaf and fried chicken. The venison meatloaf was so moist it fell just short of crumbling apart. Fried Brussels sprout leaves, roasted lightly with olive oil and sherry vinegar, added a nice, bitter crunch, while a side of mac and cheese was exactly what mac and cheese is supposed to be. As for the fried chicken, Pyles’ version may be the best I’ve had in Dallas. Once fried, the meat gets an injection of honey, giving the bird a slightly sweet flavor. The breading was golden and crunchy. Served with a side of velvety mashed potato tots, buttermilk biscuits, and “Gun Barrel” ham hock gravy, it’s Stampede 66’s most requested dish. 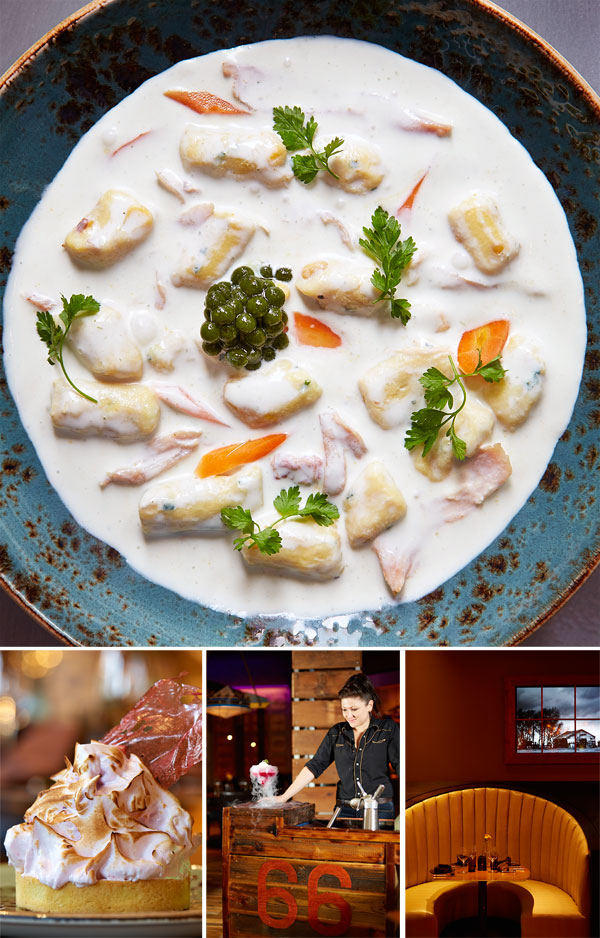 (Clockwise from top) Smoked chicken and dumplings; Stampede 66’s interior; the tableside margarita cart; lemon tart Photography by Kevin Marple
Photography by Kevin Marple
On subsequent visits, the comfort-food hits kept coming: shrimp and grits, smoked chicken and dumplings, and sliced barbecue brisket. Fanned across a wooden plate with a side of potato salad and a Mason jar of house-made bread and butter pickles, it was one of the most elegant plates of barbecue I’ve ever had. That’s another thing: don’t think of Stampede 66 as home cooking. Pyles’ recipes may be steeped in tradition, but they exhibit gourmet touches and stylish aplomb.

In his hands, a common 8-ounce burger was uncommonly inventive, featuring a smear of house-made pimento cheese and a cornbread brioche bun. It was a delicious, knife-and-fork mess. More substantial dishes included the smoked pork chop with green chile hominy and the bone-in cowboy rib-eye with blue cheese spoon bread. Both paired well with Stampede 66’s reasonable and well-chosen wine list featuring 30 labels of Texas wine. 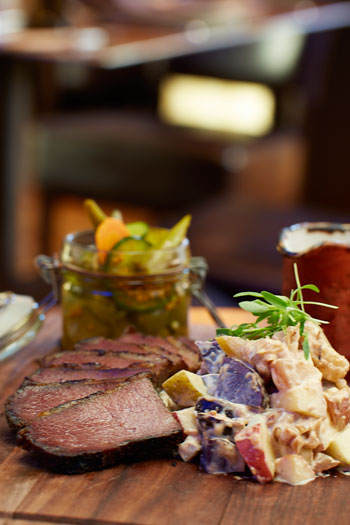 Barbecue brisket Photography by Kevin Marple
Photography by Kevin Marple
In the mood for Mexican? The restaurant obliges with, once again, an elegant yet satisfying spin on tacos and tamales. Served one to an order, tacos are wrapped in fresh tortillas made with ground-in-house corn masa. They were addictively chewy and stuffed with premium ingredients such as pork barbacoa, sweetbreads, and fried oysters. Tamales were delicious, too, plump and moist. Order both as appetizers or, at lunch, opt for the Mod Tex-Mex plate with your choice of one tamale, two tacos, black beans, and basmati rice. The aforementioned margarita cart will make you a Modern Star Canyon margarita tableside. It’s quite the show, watching the server use liquid nitrogen to blend Don Julio Blanco tequila, prickly pear fruit, Patrón Citronge, lime, and bits of candied jalapeño. Alas, the finished product tasted more like a slushy dessert than a beverage to accompany a meal. I preferred something a bit more thirst quenching, such as the paloma pink margarita with its tart grapefruit flavor. Still, the tableside theatrics were a crowd-pleaser.

On my last visit to Stampede 66 I sat at the bar and took in the boisterous scene. The restaurant was packed. Spirits were fl owing. Dainty ladies with diamond rings were licking their fingers after setting down a piece of fried chicken. Everywhere I looked I saw people having fun. Pyles has given us a unique Dallas restaurant that appeals to tourists and locals alike. There’s no better place to take your out-of-town guests to experience a lot of Texana without sacrificing good tastes.

As I scraped the salted caramel from the bottom of my heavenly butterscotch pudding, I looked up at one of Stampede 66’s television screens. As if on cue, a quote from Kinky Friedman fl ashed across it: “If you ain’t Texan, I ain’t got time for you.” I tipped my imaginary Stetson.

For more information about Stampede 66, visit our online restaurant guide.