On October 21, 1989, Nicaraguan entrepreneur Carlos Pellas and his wife, Vivian, boarded Tan-Sahsa Airlines Flight 414 at Augusto César Sandino International Airport in Managua, bound for Miami. The flight plan called for them to change planes at Toncontín International Airport in Honduras. But minutes before the Boeing 727 was to land in Honduras, the pilot miscalculated the approach and the plane crashed into the side of a mountain at 500 mph. It broke into three pieces. The fuselage ripped away from the rest of the plane behind the Pellases’ seats in the sixth row of the first-class cabin. 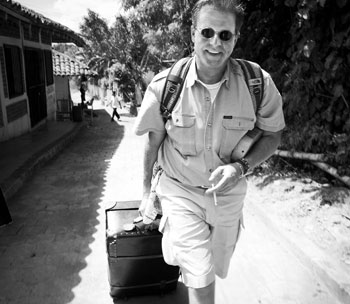 Paul Duesing works the back streets of Nicaragua, looking for local suppliers Photography by Elizabeth Lavin
Photography by Elizabeth Lavin
The couple found themselves in a wasteland of burning rubble outside the plane. Charred black skin hung from Vivian’s arms and legs. Carlos was missing two fingers. Carlos ordered Vivian to run. Seconds later, the plane exploded, and she was hurled across a cornfield and landed on an outcropping of volcanic rock. Vivian would later learn she shoved her shattered and exposed clavicle bones back into her body and continued to run. Vivian and Carlos were two of only nine survivors. The other 132 passengers were killed instantly.

During her first night in the hospital, Vivian whispered to her father that, if she lived, she would build a burn unit for children. After two years, 28 reconstructive surgeries, countless skin grafts, and extensive rehab, she made good on her promise. Today, the Association for Child Burn Victims in Nicaragua (Aproquen) provides free medical treatment to children suffering from burns in the Hospital Metropolitano Vivian Pellas in Managua, one of the world’s most significant treatment centers for young burn victims.

The land for the hospital was donated by the Pellas Group. It is an immense conglomerate, with diverse holdings that include sugar plantations, insurance and health care companies, banks, car dealerships, and Flor de Caña rum. Carlos Pellas is the company’s principal shareholder. In 2005, Pellas—a fourth-generation Nicaraguan businessman—sold his family’s bank and began using the money to improve the infrastructure of the hospitality and tourism industry in Nicaragua.

He started the Don Carlos Pellas Fund for Tourism Excellence and offered grants and microloans. For three years, he concentrated on raising the level of service on the “Route of the South,” the triangular region on the Pacific coast bordered by the cities of Granada, San Juan del Sur, Rivas, and Tola that has been a popular destination for eco-tourists and surfers. Gradually, restaurants built new kitchens. Surf hostels evolved into small hotels. Roads were paved. After 5,000 hospitality workers benefited from his program, Pellas turned his attention to a more ambitious project: promoting Nicaragua as a luxurious international travel destination. 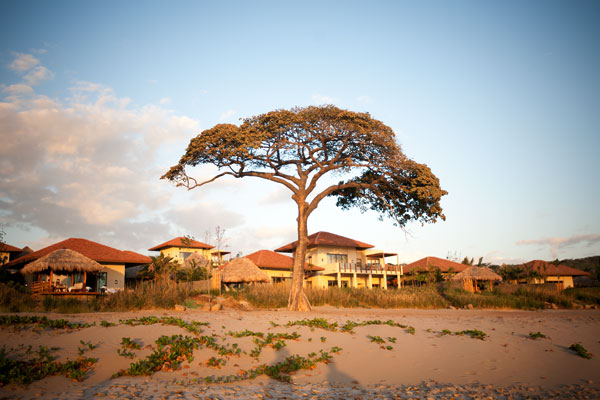 The beachfront villas at Mukul feature private pools and terraces. Photography by Elizabeth Lavin
Photography by Elizabeth Lavin
First, he had to actually make it into one. Pellas spent two years acquiring 1,670 acres of jungle and pastureland lining the stunning and secluded Emerald Coast of western Nicaragua. The land was to become Guacalito de la Isla, an exclusive luxury lifestyle development with home sites, a private beach club, and an 18-hole golf course designed by David McLay Kidd. In the heart of the community, he would open Mukul, the first five-star boutique resort in the country. Also on the site would be Casona Don Carlos, a 20,000-squarefoot residence Carlos and Vivian intended to build for their family. That was the plan. But he needed help.

“I thought if I could turn Nicaragua into a tourist destination, then that would be my legacy to my country,” Pellas says. “I wanted to touch people’s lives and change the way people lived here. It was tough, because people here did not have the skills, and they have never been demanded to be creative. So I hired a group of geniuses to come and teach them how to create.” 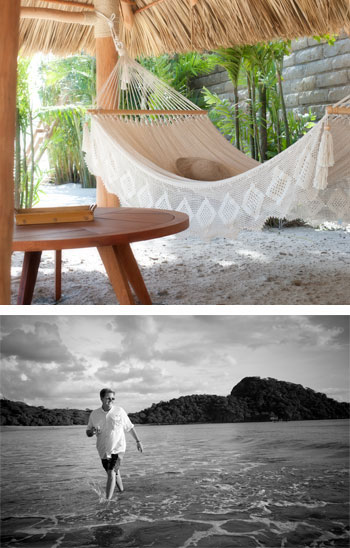 Hand-woven lace hammocks in the villas; Duesing sips Flor de Caña in the sun. Photography by Elizabeth Lavin
Photography by Elizabeth Lavin
Born in Big Lake, Texas, in 1964, Dallas-based architect and interior designer Paul Duesing is the youngest of five boys. His mother, Bette Ann, achieved a degree in art history at Maryville College in St. Louis in 1947. Her father, Thomas P. Saum, was a prominent architect in St. Louis in the 1920s. Bette Ann and her husband, Ralph, who was in the oil and explosives business, moved from St. Louis to Big Lake to be closer to Ralph’s work. “Even though we lived in a town of 2,000 people in remote West Texas, our house was always full of great art, music, and culture,” Duesing says. “We were kind of the weird people in town, but everybody liked us. We lived a real Leave It To Beaver life.”

He and his brothers had the best of both worlds: Big Lake’s school system was well-funded by the oil industry, so they received an above-average public education, and, when they were home, their parents exposed the boys to quality art and music. When they were not running around town playing cowboys and Indians with their friends, the boys were listening to Madame Butterfly and singing along with librettos given to them by Bette Ann. When Ralph played his favorite piece of music, Tchaikovsky’s 1812 Overture, the boys leapt into dance and bounced off the couches as the climactic musical cannon blasts filled the room.

Ralph was mayor of Big Lake and could usually be found drinking coffee with local businessmen at the bank. “I can remember running over to see my dad at the bank, and I would come in with bare feet that were totally black,” Duesing says. “I loved the feel of the cold marble on my feet.”

He always knew he wanted to be an architect. When he was 6, he won the Happy Bunny Coloring Contest. (This achievement remains on his official résumé.) A few years later, he and a friend collected aluminum cans to raise money to buy and plant trees at the school. Today those oak trees tower over the building’s roofline.

In high school, Duesing pleaded with the principal to add a drawing course to the curriculum. The principal challenged him to find four more students to sign up for the class. Duesing found eight. When he and 42 classmates graduated in 1983, Duesing was the valedictorian.

After graduation, he enrolled in the architecture school at the University of Texas at Austin. In 1984, he became the youngest architecture student to receive a scholarship to continue his studies at the University of Oxford. He fell in love with England. During his time at Oxford, he was granted an internship at the prestigious Gregory Aeberhard design firm in London.

In 1987, he returned to UT to complete his education and graduated with a degree in architecture. Immediately after, he received a job offer to join Gregory Aeberhard, so Duesing moved to London in 1989 to begin his professional career. He was mentored by Michael Bentley, the general manager of Claridge’s luxury hotel in Mayfair, a pillar of style and architecture since the mid-1800s. Duesing found himself working in the inner circle of high-end design. His boss was good friends with the queen. For 10 years, he worked on castles in Ireland, hotels in Spain, and resorts in France and learned the fine art of hospitality and design from some of the world’s most respected names.

In London, Duesing met Dallasite Trisha Wilson, founder of Wilson & Associates, a leader in the world of luxury hotel design. Wilson had merged her company with Gregory Aeberhard in 1987 and operated a London office. When Wilson had job openings at her offices in New York and Dallas, she offered Duesing his choice. In 1996, he joined Wilson & Associates and left London for Dallas.

In 2001, he resigned from Wilson & Associates and opened Paul Duesing Partners in a 1950s house on Fairmount Street in Uptown. He fine tuned his philosophy: stay true to the local environment, address each project with an eye toward the client’s sensory experience, and always keep a deep devotion to hands-on guidance. “I design rooms you want to live in and see your surroundings,” he says. 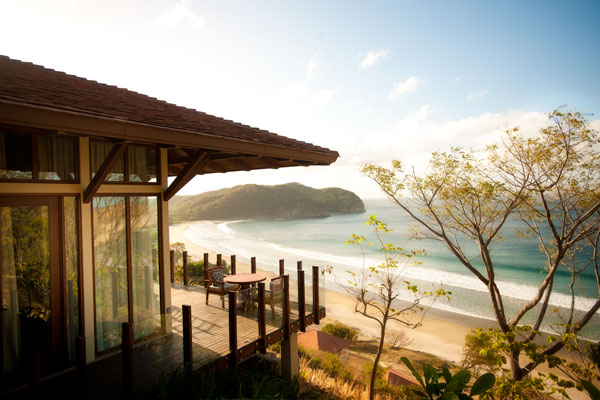 Villas overlook Playa Manzanillo Photography by Elizabeth Lavin
Photography by Elizabeth Lavin
It did not take long for Duesing’s schedule to fill. His projects spread across the globe, and he spent much of his time studying the local culture encircling each job. He interpreted their art, handicrafts, and raw materials and incorporated local traditions into his designs. His résumé boasts 97 five-star hotels, including Capella Pedregal (Cabo San Lucas, Mexico), Tucker’s Point Club (Bermuda), and the Royal Livingstone (Victoria Falls, Zambia). He has completed several private residences (or “personal resorts,” as he refers to them), a luxury bow-hunting lodge in South Africa, and a 45,000-square-foot mansion in Los Angeles. He juggles four or five projects at a time, and his hands-on approach keeps him moving. “I’m only in Dallas about 30 days a year,” Duesing says. He works wherever he happens to be sitting, whether it is a first-class seat on an airplane, the back of a van in Zambia, or on a pile of rugs in Morocco.

Three years ago, he had just left a meeting in Sharm el-Sheikh, Egypt, when his phone rang. The caller was Carlos Hernandez, a hotel developer he worked with on Las Ventanas al Paraiso in Los Cabos, Mexico. Hernandez told Duesing he had just joined Carlos Pellas’ team to build Guacalito de la Isla and asked if he would like to submit a request for proposal for Mukul. Six weeks later, Duesing was dining with Omar Sharif in a restaurant overlooking the Red Sea when his phone buzzed. Discreetly, he glanced down at the screen under his napkin. The text from Hernandez read “Welcome Aboard!”