Daniel Vaughn sat on the patio of The Common Table, in Uptown, nursing a beer. It was a little after 5 on a Wednesday in March, and he’d just turned in his two weeks’ notice at the architecture firm where he worked so that he could take a new job. He would be taking a pay cut, but the title was amazing: barbecue editor for Texas Monthly. As far as anyone could tell, he is the only barbecue editor in the country, which probably means he’s the only one in the world.

Vaughn checked his iPhone to see if his wife, a woman who dislikes ribs and brisket, needed him to pick up anything on the way home. That’s when he saw an email from Anthony Bourdain. It was short, and Vaughn read it out loud: “Great first review. Here’s to many more.” Bourdain was referring to Vaughn’s first book, out this month, The Prophets of Smoked Meat: A Journey Through Texas Barbecue. It’s part grail quest, part instruction manual, all beautifully photographed and illustrated, published under a new imprint run by Bourdain.

In less than five years, the 35-year-old Vaughn, a stocky, balding, polo-shirt-tucked-into-khakis guy, has gone from running a hobby blog about his meat-eating experiences to being perhaps the country’s foremost barbecue expert and exchanging emails with culinary rock stars.

It all started, really, with an email to Nancy Nichols, D Magazine’s dining editor. Back in 2009, when Vaughn’s blog wasn’t yet a year old, he asked Nichols if she would add Full Custom Gospel BBQ to the list of local blogs on D’s food site. “In true Nancy style,” Vaughn says, “she just copied and pasted my message to her, put it up on SideDish, and was like, ‘Hey, what do you think, SideDishers? Does he belong on the blog roll?’ And I was like, ‘Oh, great, thanks!’ ”

Support from Vaughn’s friends poured in. One commenter stood out, though, a man Vaughn knew of but had never met—Jay Jerrier. Today, Jerrier owns two locations of Cane Rosso and the soon-to-open Zoli’s in Oak Cliff. But at the time, he’d recently quit his day job to lug around a mobile oven and cook Neapolitan pizzas at wine bars and chocolate shops. A full year after Jerrier posted his supportive comment, Vaughn finally met him at one such pop-up pizza parlor.

“I got these koozies printed up with the label of my blog on there, and I went up to Chocolate Angel Too, where Jay was setting up,” Vaughn says. “I showed up to meet Jay, say hi to him, give him a koozie, tell him thanks for his support on the blog, and pick up a couple of pizzas. And then this guy standing next to me asked, ‘Hey, are you that barbecue guy?’ ” 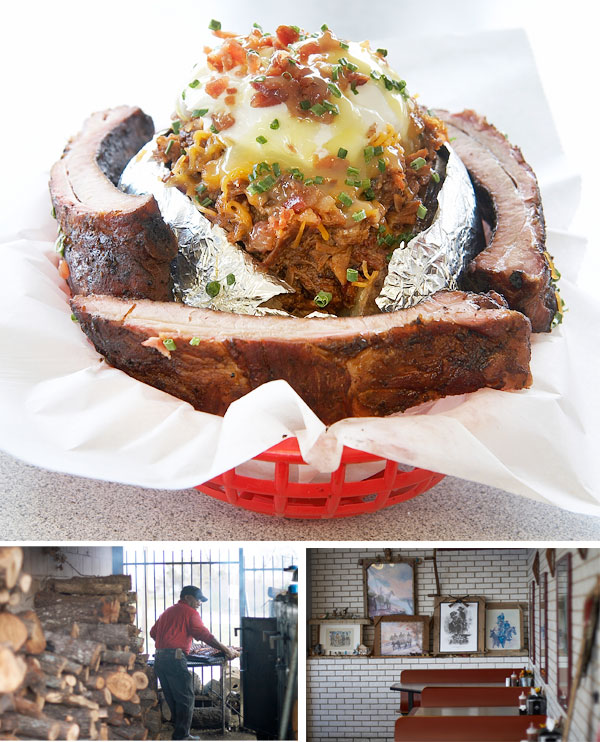 In D Magazine’s February 2010 cover story, then-blogger Daniel Vaughn named Off the Bone BBQ the best in North Texas. Photography by Kevin Marple
Photography by Kevin Marple
Next to Vaughn stood David Hale Smith, a literary agent who made it a Friday night routine to take his family to Jerrier’s mobile restaurant. A few months earlier, Smith had clipped out a short Dallas Morning News profile of Vaughn and stuck it in his briefcase so that he could email Vaughn later. Months passed, and Smith never got around to it. Then fate, a friend to the forgetful, intervened.

Vaughn was at first a little weirded out by the eager stranger, but Smith explained that he owned DHS Literary and that he’d been meaning to contact Vaughn after reading about him in the paper. Vaughn was wary but agreed to meet Smith at Baker’s Ribs the following Monday. One meal couldn’t hurt. He was right; they hit it off. Vaughn even gave Smith a souvenir koozie.

“That was our first date,” Vaughn says. “He didn’t put out.”

It took Vaughn an additional 18 months to get his book proposal together and recruit photographer Nicholas McWhirter for the project. By then, Smith had merged his firm with InkWell, a literary management company based in New York City. A new colleague of Smith’s represented Anthony Bourdain, the man whose television career was launched by his book Kitchen Confidential. Bourdain had recently gotten his own line of books for Ecco, an imprint of HarperCollins Publishers.

Here’s where Smith’s and Vaughn’s stories diverge. Smith says he showed the proposal to Bourdain, who loved it, and the deal was pretty much signed before Bourdain came to Dallas for a speaking engagement. Vaughn, on the other hand, says his agent told him not to get too excited, there wasn’t a guarantee he had a deal, and he shouldn’t quit his job.

The night of Bourdain’s talk at the Majestic Theatre happened to be Game 6 of the 2011 World Series. Vaughn stood nervously in the VIP book-signing line after Bourdain’s gig, clutching the proposal Smith had told him to bring. “I didn’t know if he was going to know who I was,” Vaughn says. When he introduced himself to Bourdain and gave him the proposal, Vaughn says he was shocked to hear Bourdain say, “Oh, yeah, that? I’ve got a black-and-white copy already in my bag. Been looking at it on my way here. Don’t worry. We’ll be doing business together.”

That night, the Rangers lost to the St. Louis Cardinals, while Daniel Vaughn’s meat-filled dreams came true. “I was just like, ‘Holy shit. This is incredible,’ ” Vaughn says. “It was a pretty momentous evening.”